If you are seeking an allocation to an alternative currency, gold bullion is perhaps the best option still available.

Gold bullion has proven itself time over multiple millennia as a store of value and respected medium of exchange.

On this page, we will cover gold price history and historical gold prices from +5,000 years ago in ancient Egypt to today in this 21st Century Gold Rush.

To drill deeper into daily and yearly gold prices, you can also visit our live spot gold price page where there you can also find year to year gold price data, covering this full fiat US dollar era post-1968 onwards.

As a short primer, the following video covers the recorded history of gold and its fundamental supply-demand factors today.

Most of our website visitors are from the USA and for that reason, we will begin with a chart covering the US dollar price of gold since the founding of the United States of America (USA).

Below we will examine the significant historical dates and charts for US dollar gold prices.

We will begin with a roughly 700-year gold price chart that uses UK gold price data converted into US dollar gold prices going back in time, even before gold-hungry Christopher Columbus and other new world explorers arrived in the Americas. 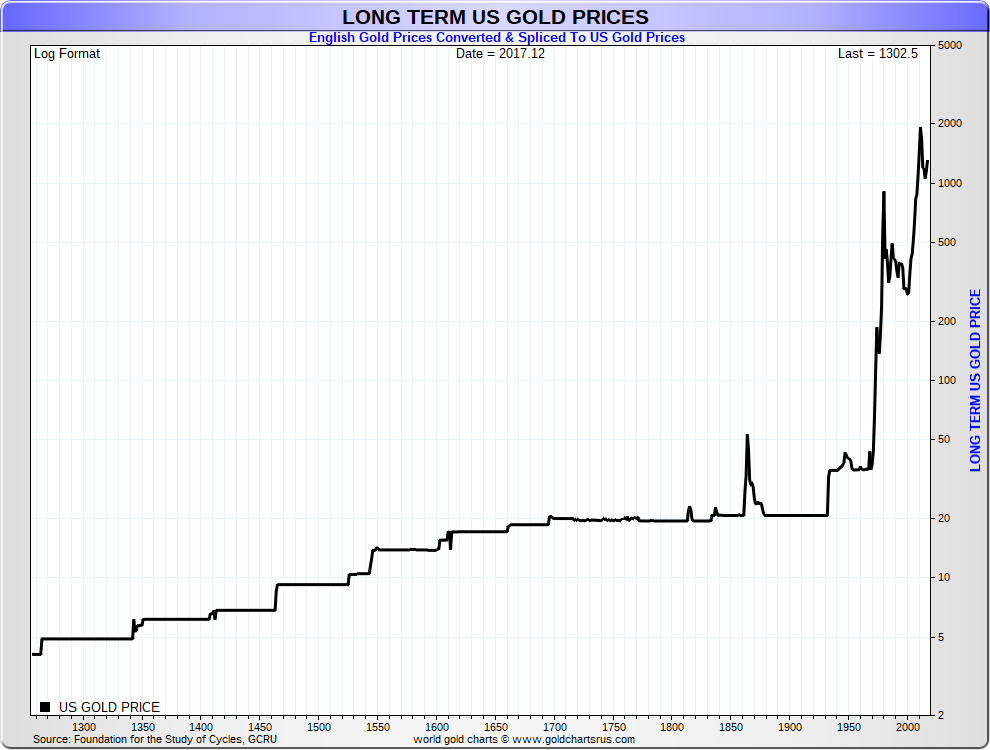 Indeed 2020s China Gold Demand and Russian Gold Demand are now at historic levels as they are respectively working and even coordinating to de-dollarize their 21st Century economies further.

Up next is a historical gold price chart that covers the entire history of US dollar gold prices from the year 1776 to 2019.

For the majority of non-war US history, the price of gold was steady at $20.67 per oz USD. 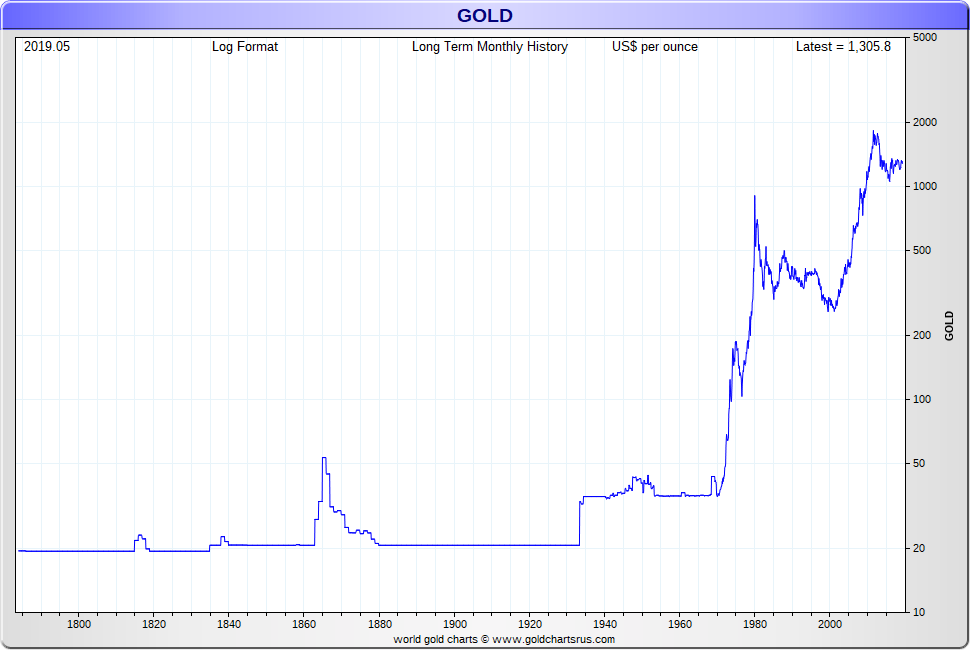 Following the 1933 gold nationalization also known as the US gold confiscation, the US dollar was devalued against gold by almost 70% to an eventually fixed price of $35 oz USD. The portion of US citizens who followed Executive Order 6102, saw their purchasing power lose substantially to gold in 1934.

It was not until the year 1975 with gold that US citizens were again allowed to own more than 3 oz of private gold bullion a piece (the law was for four decades that no more than $100 US dollars in private gold ownership were allowed by US citizens, 1934 through 1974).

Even average contestants on the popular game show called Jeopardy, do not know some of these simple facts. See for yourself on this $800 question. 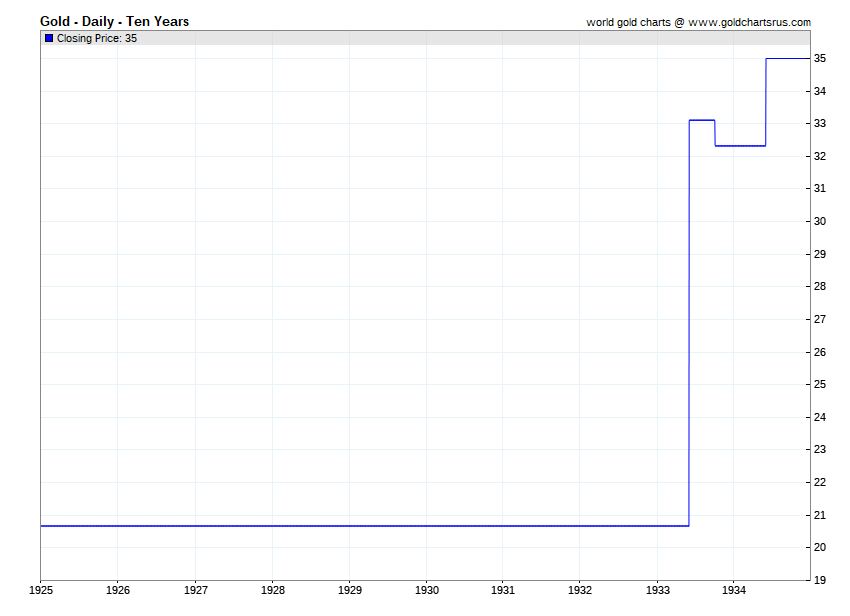 After the late 1960’s collapse of the gold price rigging London Gold Pool, the August 1971 Nixon Shock ushered in our current floating fiat currency exchange standard where gold prices seemingly only gain value vs. fiat currencies over the long term.

Below is a chart of gold prices in US dollars during the year 1971. 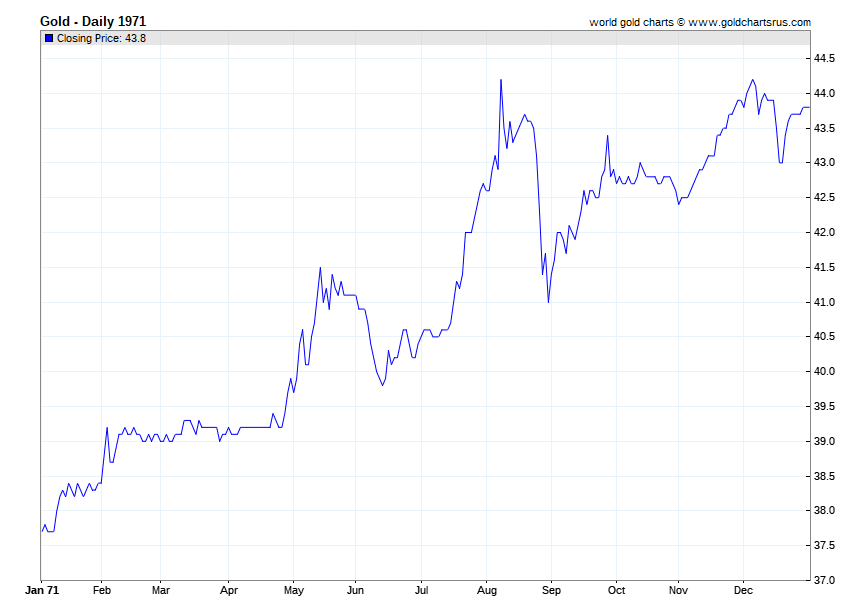 The following chart illustrates how the US dollar performed from the then London Gold Pool’s final years up to the year 1974 in gold when the COMEX gold futures contract took over and began dominating in gold price discovery.

Again, US citizens were not allowed to own more than 3 oz of gold bullion each from 1934 to 1974. Given US Treasury cables now disclosed, it is clear the US government was intent on dissuading private gold ownership in mass likely seeing it a threat to the fiat US dollar's power.

The first modern gold bullion coin was introduced in 1968 by South Africa. From the region that has mined more than

The next chart illustrates US dollar gold prices in its 1970s and 1980 gold bull market, which is currently being dwarfed by this 21st Century Gold Rush ongoing. 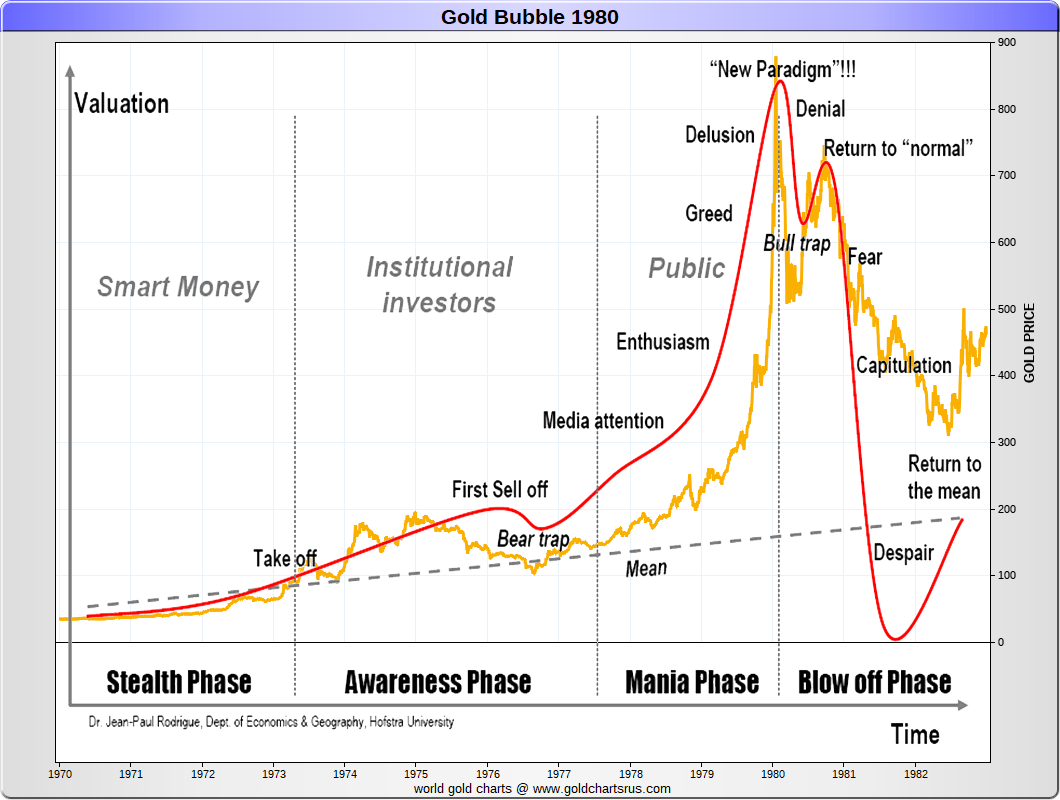 Below is this ongoing 21st Century Gold bull market's potential and its future to come.

This current gold bullion bull market has gotten arguably stretched by dominate derivative price discovery and documented by the fact that the CME Group continues to allow non-US central banks and other powerful entities to trade within our critical commodity and financial price discovery markets.

Such price discovery perversions are likely stretching the timeframe for gold bullion's current biggest bull market of all time. 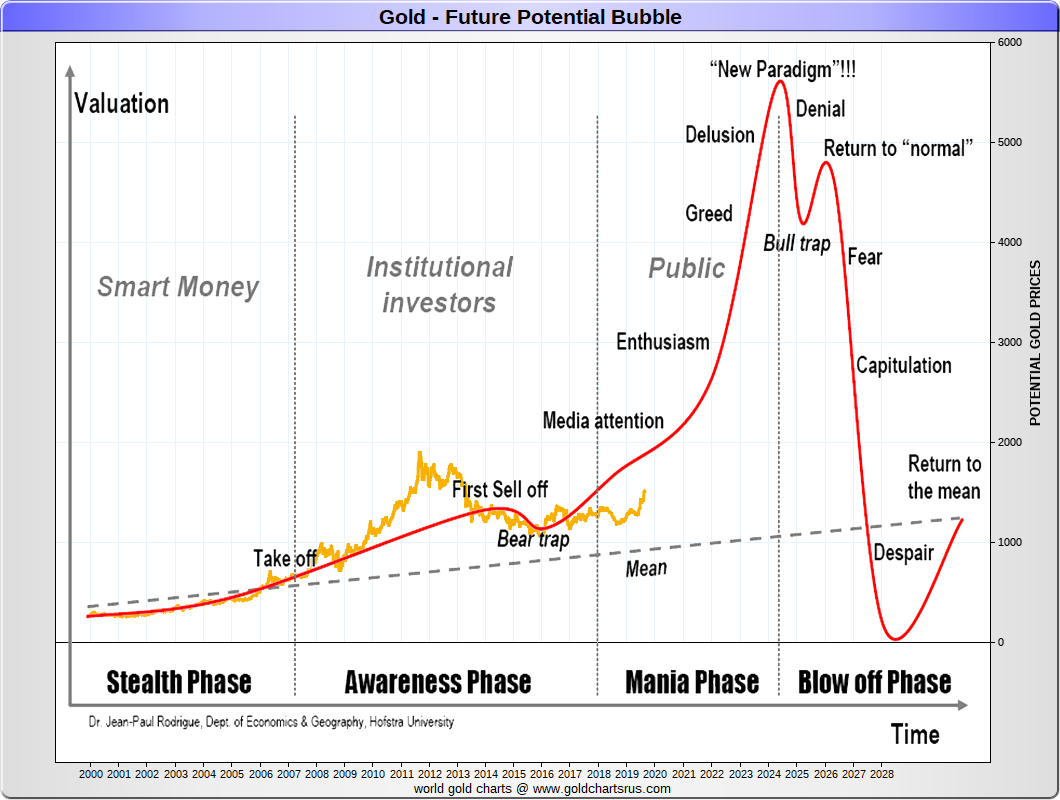 Finally, we will use the most accurate historical inflation data available produced by ShadowStats to better understand gold’s US dollar value for our nation’s history.

The chart below uses the ShadowStats Alternative CPI-U Measure, which is an attempt at adjusting government benefiting CPI-U inflation underreporting which has widened since 1980.

The changes in methods used to report inflation have drastically changed over recent decades and were likely designed to move the concept of the CPI (core price inflation) away from being a measure of the cost of living needed to maintain a constant standard of living.

This following chart uses more accurate US dollar price inflation reporting methods in place up to the year 1980.

According to the chart, US dollar gold prices and values were cheapest in the year 2000 and most expensive in late January 1980. 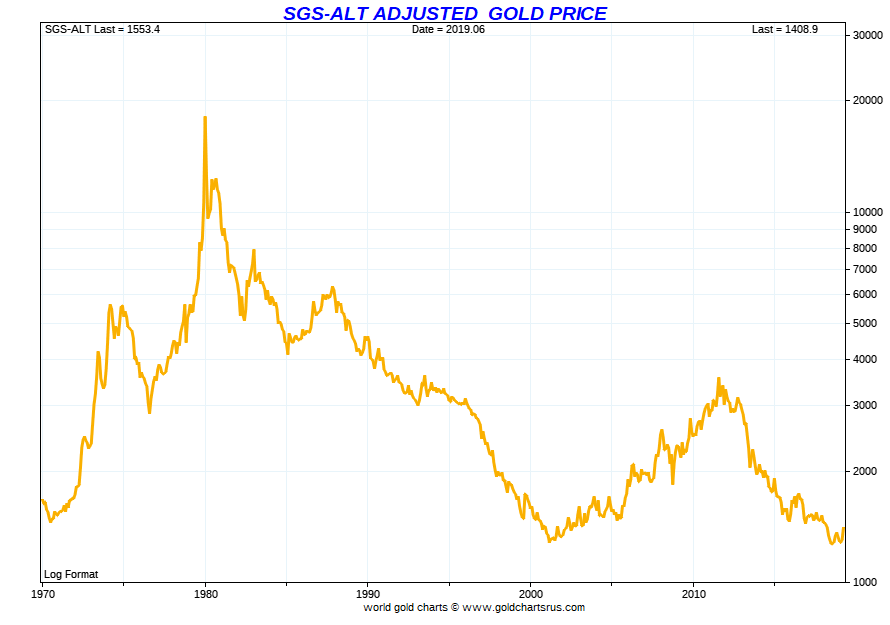 Click the year of your choice below for both Daily Gold Price History and Yearly Gold Price Charts throughout this ongoing Fiat Currency Era. 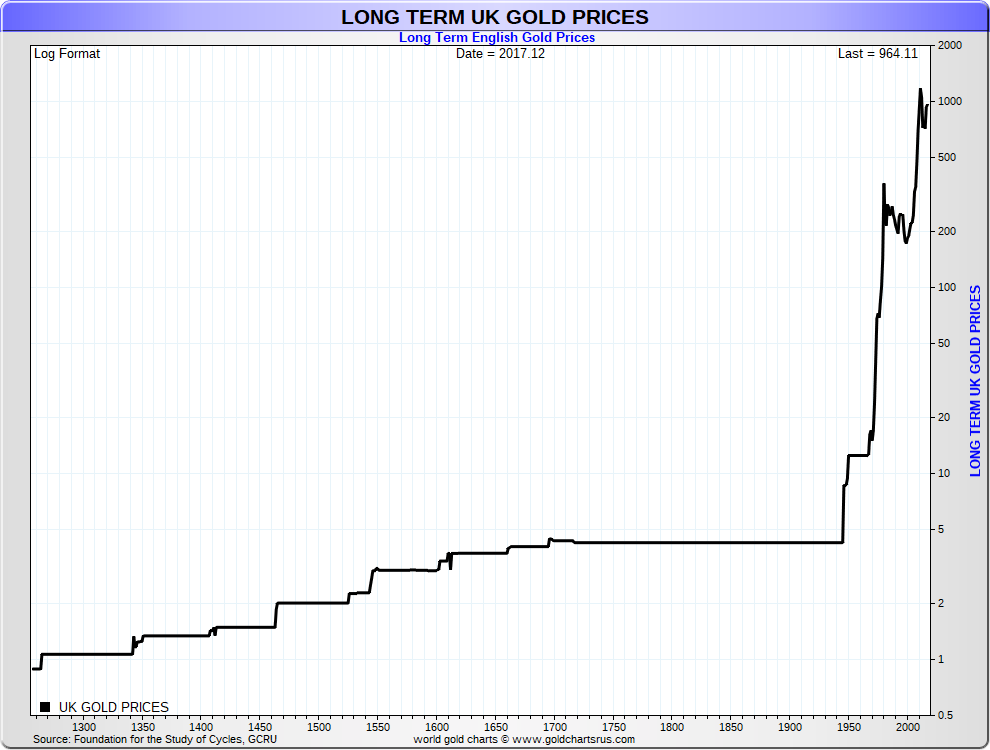 You can download each year’s official British gold price from 1257 to 1945 by clicking here.

The nearly seven hundred year data set begins with a British gold per ounce price of 0.89 £ oz and ends with multiple centuries of a fixed 4.25 £ oz price for gold in British pounds.

Following World War II the price of gold in British pound terms has almost gone up exponentially eclipsing 1000£ oz for multiyear stretches in this decade (the 2010s),

One of the best ways to understand gold’s trading value historically is to measure it against its precious monetary cousin, silver.

Investors often use the historic Gold Silver Ratio to understand perhaps which metal may be more undervalued vs. overvalued short, medium, and even in the long term.

Here is a short definition of the gold-silver ratio:

Gold Silver Ratio - (n) a moving ratio measurement of the amount of silver one can buy with a fixed amount of gold. Typically in the western world, the gold to silver ratio is measured by merely dividing the gold spot price by the silver spot price. Weighed in like-kind amounts: grams, kilos, tonnes, troy ounces, etc.

As of producing this content, the gold-silver ratio has risen near 80. The following long term charts show the respective history of gold vs. silver price ratios in the USA and UK respectively. 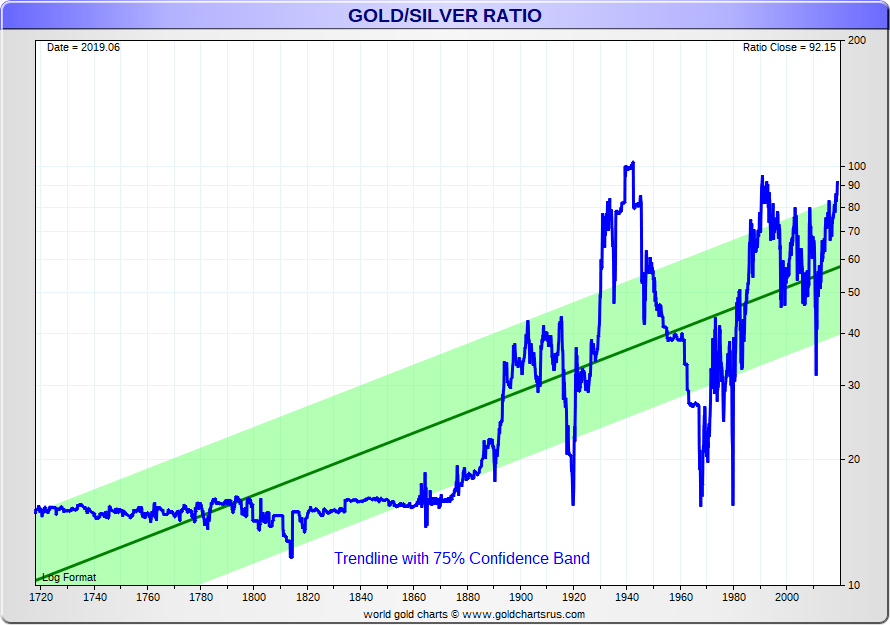 The following content and historical data are from the book called ‘Silver Bonanza,’ authored by James Blanchard III released in 1995.

Mr. Blanchard was a successful businessman and the driving force behind the ‘re-legalization’ of private gold ownership in the USA in 1975.

Only recently have we learned through Wikileaks intercepted US cables that simultaneous efforts were ongoing to discourage US citizenry from buying and saving gold bullion long term (but that is a COMEX and gold price discovery topic for another post).

Below is nearly 5,000 years of gold-silver ratio data:

The more ancient ratios are estimates for long periods of time. Those from 1600 to 1900 (AD) are yearly on periodic averages from Michael G. Mulhall, The Dictionary of Statistics, 4th ed. (London: George Routledge and Sons, 1899) and E.J. Farmer, The Conspiracy Against Silver, or a Plea for Bimetallism (New York: Greenwood Press, 1969; originally published 1886), p. 13.

The other statistics are from Steve Puetz’s Investment Letter, or from our own records. Statistics after 1900 are not yearly averages, but lows or highs that generally did not obtain for long periods. In 1980 the ratio stayed below 20 to 1 for the first two and a half months only, and touched under 16 to 1 for only a few days in January.

You can always find fresh up to date gold price information on our live Gold Price Page.