Although not common historically, palladium prices have recently climbed higher than both platinum and even gold in terms of fiat US dollar prices ongoing.

Since this value of palladium spot prices fluctuates with time, it is an invaluable factor to consider when making palladium bullion investments.

However, the palladium spot price is not the exact going rate of an ounce of palladium when you buy palladium bullion products.

What Affects the ongoing price of Palladium?

Like all other precious metals, palladium prices depend on a variety of factors.

Unlike many popular precious metals that don’t see much industrial use, palladium is an essential cog in the huge wheel that is the automobile industry. It is widely used to reduce noxious fumes from vehicles that run on gasoline.

Especially since the Volkswagon diesel engine data-rigging scandal, the demand for palladium has eclipsed its main precious metal competitor in the automobile industry (i.e. platinum). Added to this somewhat recent market change is the fact that the LBMA, NYMEX, and palladium ETFs have dwindling palladium bullion inventories ongoing (i.e. palladium lease rates are climbing, signaling physical supply tightness and shortage).

Added to all this are the palladium investing fundamental facts that over 80% of all physical palladium bullion and ore comes from two nations which have both proven rather volatile politically over the last few decades: Russia & South Africa. As well, palladium ore is often merely the byproduct of nickel mining in Russia and platinum mining in South Africa.

New industrial uses, higher industry demand, fluctuations in forex prices of countries that supply palladium, trade sanctions on palladium supplying counties, and newer commercial uses are just some of the factors that affect the prices of palladium bullion.

Simply put, this palladium precious metal’s demand and supply in the market plays a key role in its ongoing fiat currency price reflection.

What is the long term Palladium Price History?

The former all-time palladium record price happened near the end of the dot-com bubble, circa 2001. This former record nominal fiat US dollar price high for palladium was of course recently eclipsed in 2018. But remember 2001 US dollars were arguably 2-3Xs stronger in general purchasing power. This latest palladium nominal price record peak could go exceptionally higher than where it is at the moment.

How much higher could it go?

On that same day, palladium's fiat US dollar per troy ounce price was more than 4Xs the then gold price, almost 2Xs the platinum price, and over 250Xs the then silver price. Again the beginning of the 21st Century, the fiat US dollar was even stronger versus other fiat currencies and precious metals than it remains now.

The following chart shows palladium price history in full fiat US dollars per troy ounce, from when the NYMEX began trading palladium futures contracts in 1977 up to today in 2018. The NYMEX and LBMA are the two most dominant influences on day-to-day palladium price data for now. 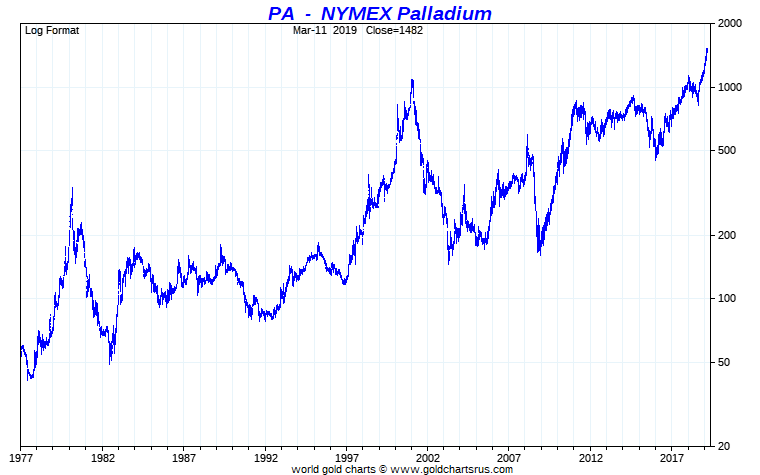 Who sets the palladium spot price?

Palladium futures price discovery mostly occurs on the NYMEX (New York Mercantile Exchange) and it has a dramatic effect on ongoing palladium spot prices, that is until they are real physical palladium bullion shortages.

These aren't mere allegations or unbacked ramblings, they are facts you can see for yourself on the NYMEX's CME Group's very own website.

The following chart shows how much NYMEX palladium stockpiles have diminished over the last 4.5 years. 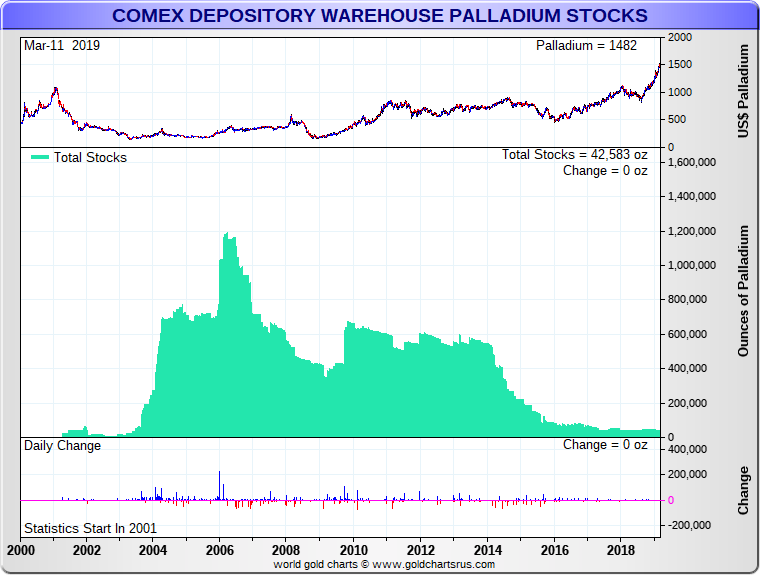 Which fiat currency is used to provide the Spot Price of Palladium?

The fiat US Dollar (aka fiat Federal Reserve note), is the international standard for prices of many precious metals, palladium included.

Therefore, all palladium spot prices are in fiat USD. The ongoing fiat USD value of palladium is converted into other fiat currencies before they are traded on local exchanges.

Is buying Palladium Bullion in another country possibly cheaper?

No. Well perhaps in some dangerous black markets in Russia or South Africa closest to the world's largest sources of palladium, but seriously speaking the answer is no.

Virtually all palladium mined in South Africa is sold to foreign palladium industrial users and investors. Russia may stockpile some palladium for military or monetary purposes, but at large the vast majority of Russian palladium ore and bullion gets sold in world palladium markets.

Even though palladium is traded on many global futures contract exchanges, palladium spot prices are rather constant across the globe – with negligible variations here and there. Hence, you will find the same palladium spot price virtually everywhere, irrespective of country.

The following illustration shows the Palladium Price history performance on an annual basis in various fiat currencies around the world since the start of this 21st Century Bullion Rush. 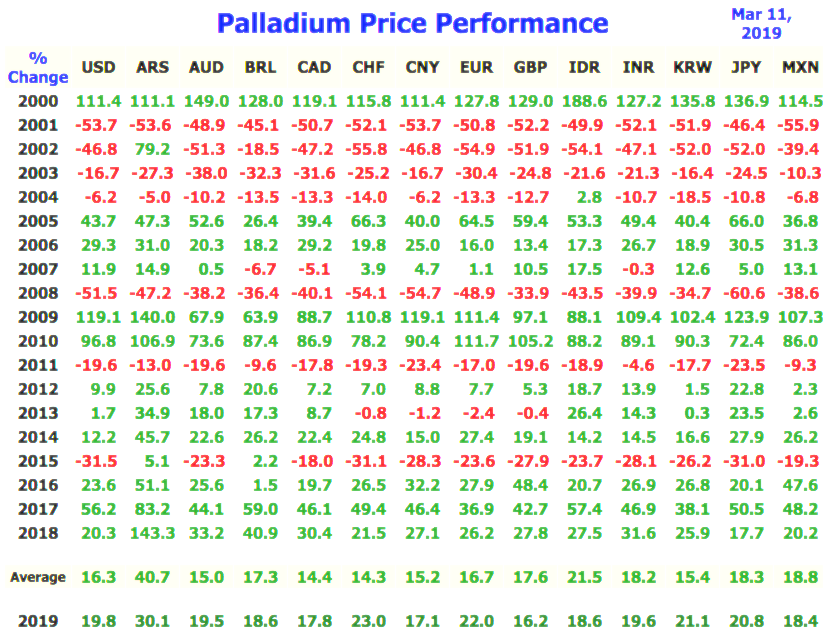 Will changes in the Palladium Spot Price after placing a Palladium Bullion order affect my order's price?

All SD Bullion orders are final, irrespective of market fluctuations after the order's placement and fiat currency price lock-ins.

What are “bid” and “ask” prices? Why are they different?

On the other hand, the “ask” price is the price a bullion dealer uses when selling you palladium bullion.

The gap between these prices is called the bid-ask spread and is a great indicator of the competitiveness of the precious metals palladium bullion products at any given time.

Knowing what the exact bid price is for typical bullion products you buy is critical to ensure better chances of successful longterm bullion investing and savings. It helps ensure you never sell at low bid prices but better at respectable competitive bid prices.

The larger the gap in the “bid” and “ask” prices, the less competitive the market is, and vice versa. Hence, the best time way to ensure your assets and capital preservation is to buy bullion products with very narrow bid-ask spread gaps.

Why are prices per ounce higher than the spot price of palladium?

When it comes to a precious metals product, there are many other costs associated with it. These costs include secure shipping, safe storage, manufacturer costs, dealer premiums, and so on. Even dealers cannot buy palladium at the palladium spot price. To counter the additional costs and maintain profitability, they add a slight premium to the spot price.

Are taxes added to the current palladium prices?

Currently, there are some select US state sales taxes to be paid to SD Bullion when purchasing palladium bullion. That said, it is the vast minority of US states that require us to ever charge state bullion taxes on.

How has the Palladium price performed versus Gold, Platinum, and Silver?

Palladium has been the best performing precious metal over the last few years.

The following chart illustrates how Palladium, Gold, Platinum, and Silver have performed in US dollars per troy ounce of each respective aforementioned precious metals (PM). 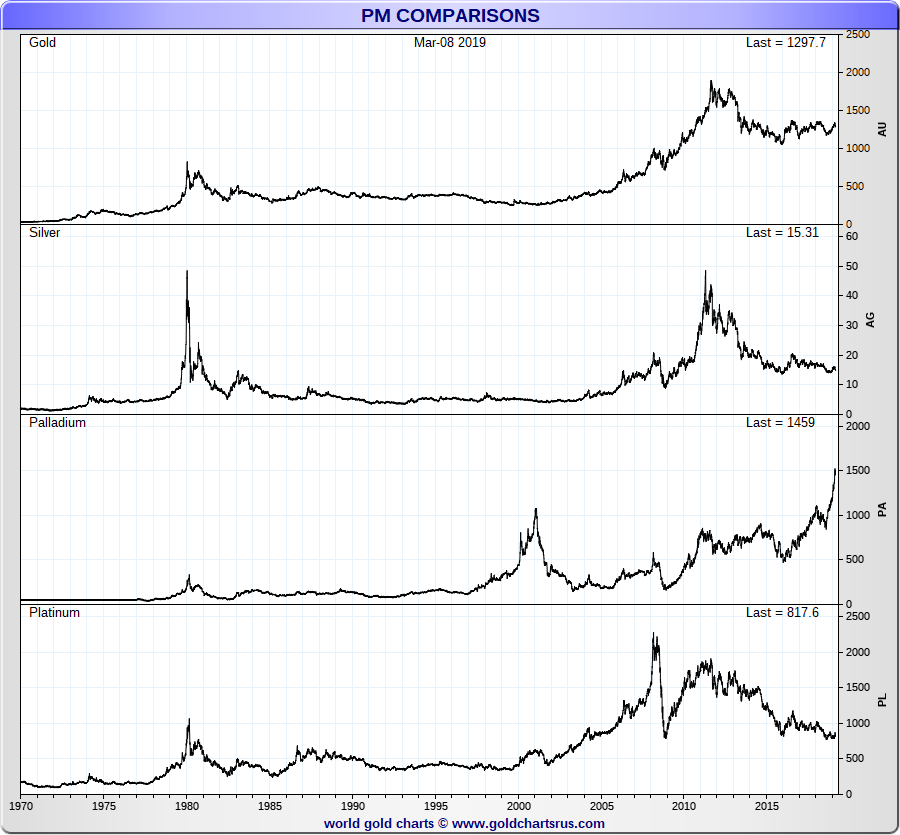 What about Palladium vs Gold?

In general, since the start of 2016, palladium has outperformed gold in terms of fiat US dollar price per ounce comparisons.

The following chart gives you a much longer understanding of the value relationship between these two precious metals including their percentage based US dollar per performance over the same timeframe.

You will see how in the 2001 Palladium price mania that it was valued over 4Xs the price of gold at the time. There is ongoing speculation that a physical palladium shortage is currently worsening today.

This, after all, would merely be history rhyming within about two decade's time. 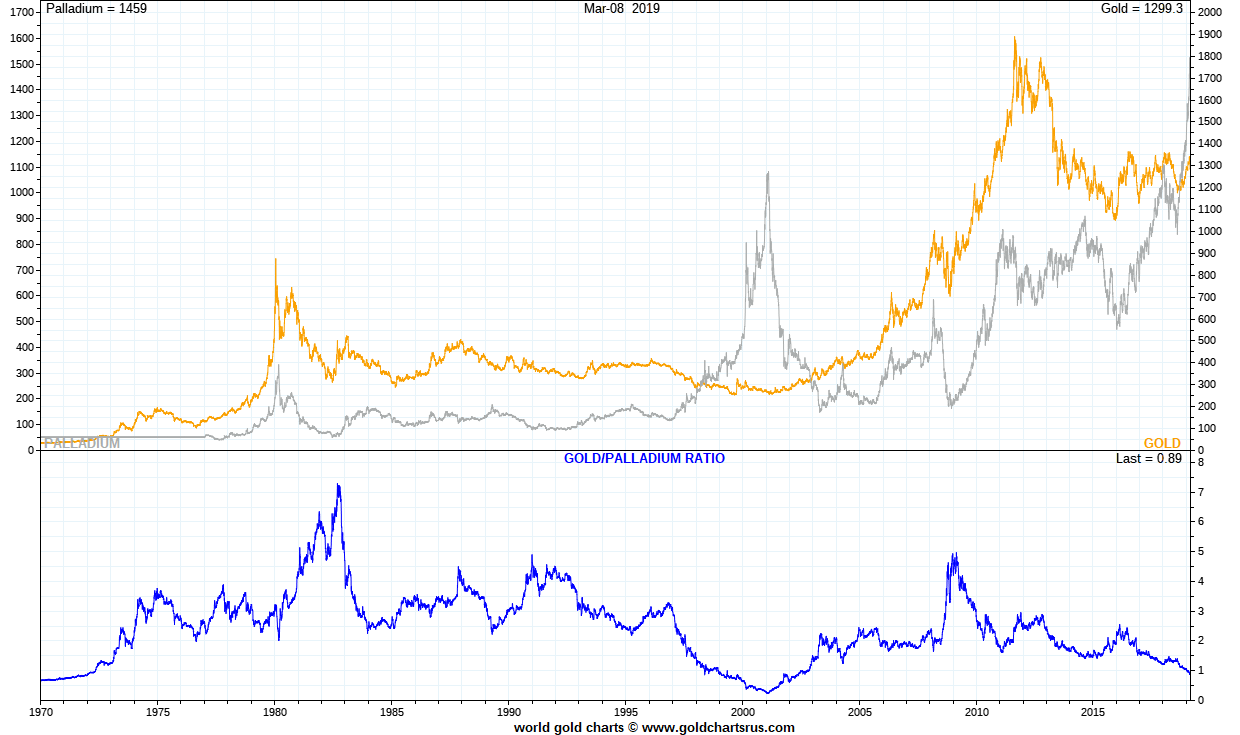 What about Palladium vs Silver?

In general, since the start of 2013, palladium has outperformed silver in terms of US dollar price per ounce comparisons.

The following chart gives you a much longer understanding of the value relationship between these two aforementioned precious metals including their percentage based fiat US dollar performance over the same timeframe. 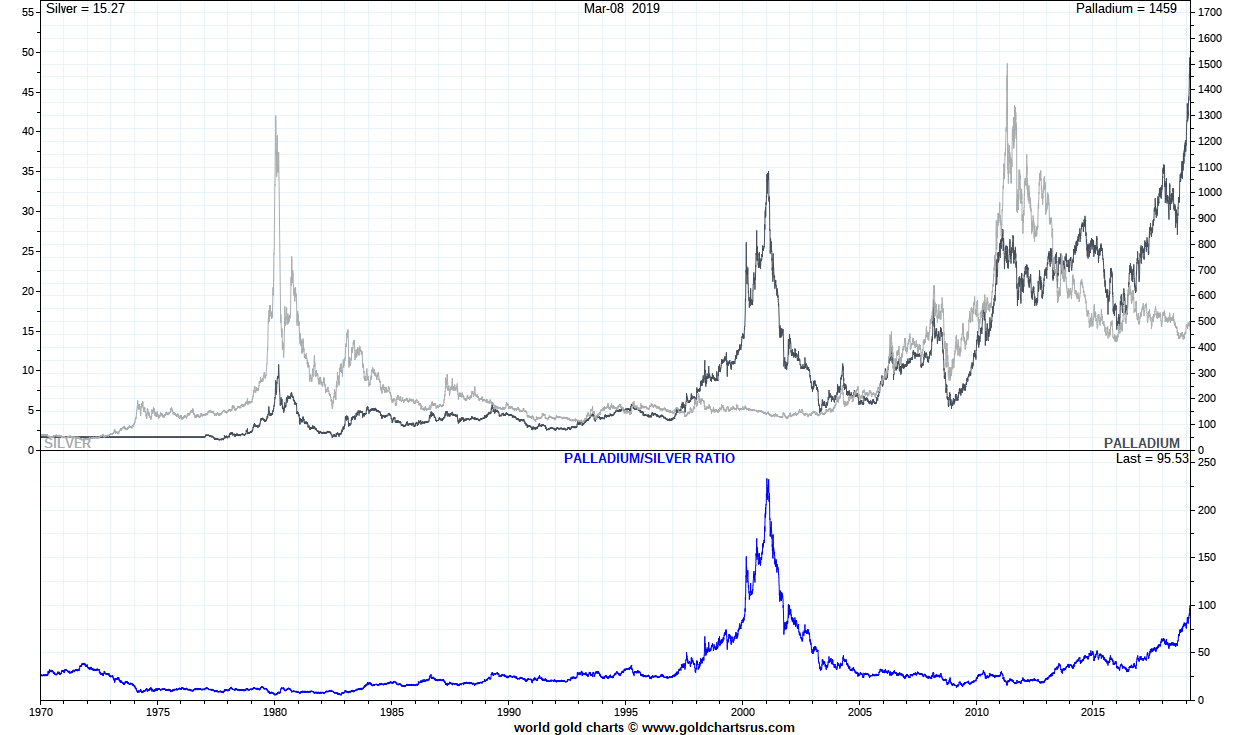 And how about Palladium vs Platinum?

Since beginning the year 2009 AD, palladium has outperformed platinum in terms of fiat US dollar price comparisons.

The following chart gives you a much longer understanding of the value relationship between Palladium vs Platinum, including their fiat US dollar per performance over this full fiat currency era post-1971. 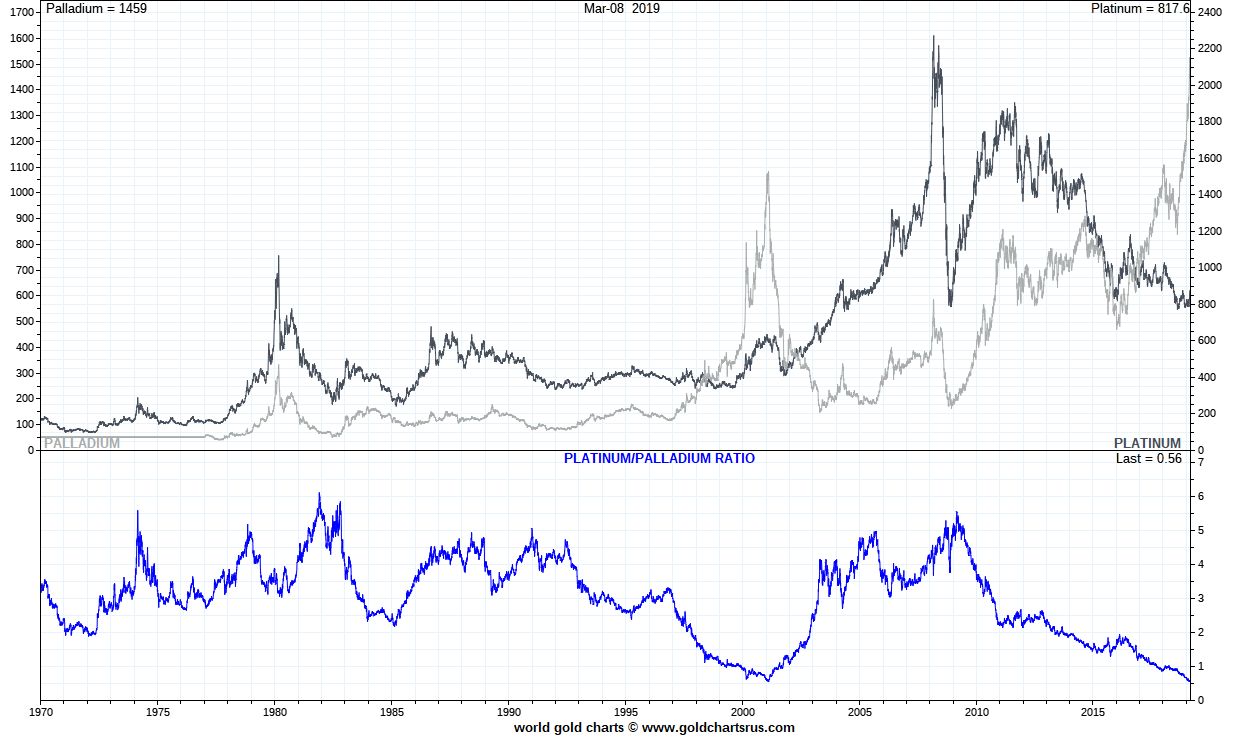 Is Palladium a good investment?

Although all investments come with their share of market risks, shrewd bullion investors have learned to identify potential winners by minimizing risks and buying bullion for the long term. Let’s take a quick look at the palladium investment fundamental factors today.

Russia and South Africa are the chief producers of palladium in the world (over 80% of physical palladium ore comes from these two nations). All relatively stable countries like Canada and the USA that should also keep up a steady supply of palladium for many years to come.

Any commodity or precious metal that is driven purely by speculation should be seen as a high-risk proposition. The higher the number of applications (industrial, commercial, investment, speculative) a precious metal has, the safer the investment it is considered to be.

Palladium is widely used in the automobile industry – as a catalyst in gasoline-fueled car engines to reduce noxious fumes.

This palladium precious metal is used to also make jewelry and is used in dental amalgam and photography as well.

Add to this the recent surge of palladium bullion products from mints all over the globe, most notably the Palladium Eagle Coin from the US Mint – and you have a precious metal that is a popular investment option and also has broad commercial and industrial demand.

This ensures that the demand for palladium is not purely fueled by investors and speculators; there are indeed practical use for the palladium ongoing and is in substantial industrial and commercial demand outside the investor market, which gives it a solidity that many precious metals do not enjoy.

So yes, historically speaking, precious metals like palladium have seen a steady upward trend and it seems to have all the makings of a good investment asset for the long term.

In late September 2018, we spoke with Palladium and Precious Metal mining consultant about the ongoing physical Palladium shortage. Since that interview, the fiat US dollar price of palladium had risen +43% by middle March 2019.

Should Palladium Bullion be a part of my bullion investment portfolio?

It can be prudent that all investments, whether investing the stock markets, physical precious metals, or any other asset class, should be properly diversified.

Although prudent bullion allocation and diversification might decrease your net returns in a short or medium term, it often acts as a solid shield against sudden market shocks over the longer term.

Similarly, adding palladium to an investment portfolio ensures that you have another base covered and aren’t putting all your eggs in one hypothetical precious metal basket. Read more about bullion investment allocation studies here.

Diversifying your precious metals portfolio with metals like palladium is a sensible option because sudden market changes can be brought about by just about anything. A new technology, a new supply source, and so many other factors can bring down the price of any metal rapidly. Hence, it makes sense to distribute your wealth through various investment vehicles.

Palladium is also as good a hedge against inflation as the traditional precious metals investment avenues of gold and silver.

Palladium should ideally be a part of any investment portfolio from this diversification standpoint. If you want to learn more about palladium bullion be sure to visit our palladium investment fundamental section here.