Learn what a former central banker who saw some 10,000 tonnes of US gold reserves sold from US vaults in 1950s and 1960s thinks of gold.

In less than 50 years since all national currencies cut final ties to gold, all fiat currencies have exceedingly lost over 90% of their value to gold ( all lose value to silver, platinum, and palladium over the long term as well). Once one understands how national currencies come into existence, this makes complete sense.

The same cannot be said for the 180 various fiat currency numeraires in existence today. 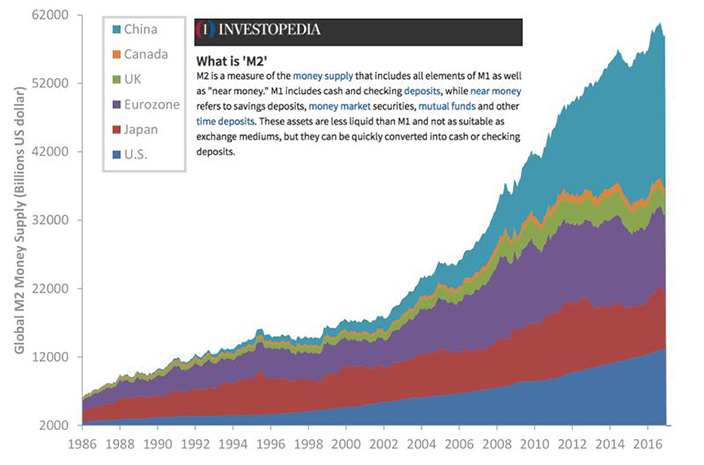 Simply refer to the rapid growth in the M2 chart above and look at the growth in 6 of the largest fiat currencies over the past 30 years alone. It doesn’t appear this fiat currency expansion trend is reversing any time soon.

Especially since 2008, much of this recent currency creation has gone into Chinese infrastructure pushes, as well to help prop up financial markets across the world. Various central banks around the world are not acting like hedge funds.

Central bank balance sheet growth has now more than tripled since the financial crisis started in 2007. Their supposed mandate to provide stable monetary policy has clearly crossed the barrier by helping manage and more easily fund the fiscal policy-side of their government partnerships.

Monetary authorities currently claim to be gearing up to, and or are, actively tightening financial markets by raising interest rates. The promised deleveraging of their balance sheets is supposed to come soon as well. Perhaps we should hedge on their unorderly failure to do so without inciting unintended consequences, recessions, or potential additional future financial crisis. 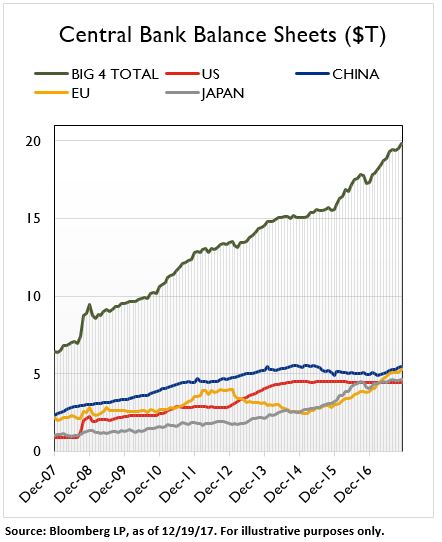 Structurally we still remain fiat with limited discipline exhibited. Instead central banks are creating currency to buy ‘assets’ on their balance sheets to help prop up financial markets.

The Official Monetary and Financial Institutions Forum (OMFIF) now estimates 30 to 40 central banks worldwide are investing, in one shape or form, a portion of their foreign exchange holdings in equities (stocks like ETFs or in companies like Apple for instance).

With continued lacking discipline in monetary policies, we have now reached record 5,000 year low interest rates with mushrooming global debt levels. How much further do we continue on this path? Do we reverse this debt build-up without unintended consequences and further financial crisis to come?

We might consider a defensive allocation to bullion when considering what to do with our wealth now and ahead. Especially when one considers how highly valued equities and bonds are to bullion and other commodities at the moment. 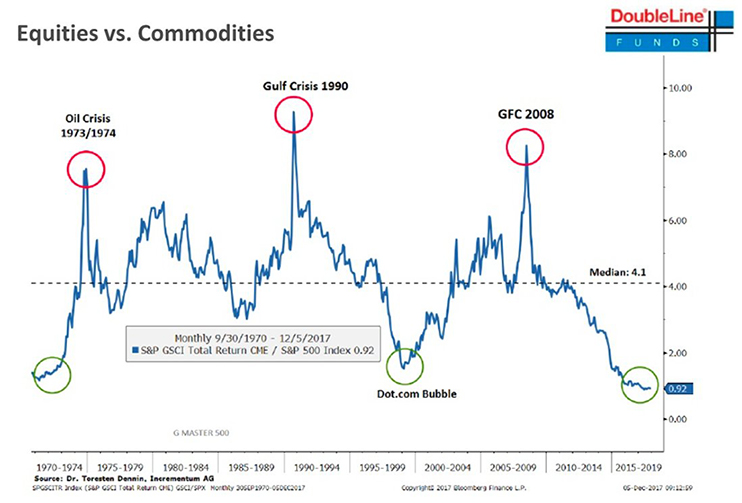 Consider older world, old money practices which have allowed dynastic families to preserve wealth. Not merely for generations, but for 900 years consecutively.

According to this and other anecdotal descriptions. Long standing wealthy families focus on buying the “things that last” to preserve capital.

In the long view, simply consider owning somewhat less of the things that do not last. 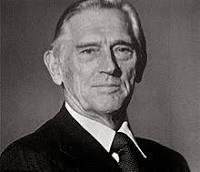 “The U.S. and world economies are on the threshold of a deflationary crash that will make the 1930s look like a boom. Gold will be the single best investment to own. Buy it now while it's still cheap.” - John Exter

John Exter (1910 - 2006) was an American economist, member of the Board of Governors of the United States Federal Reserve System, and founder of the Central Bank of Sri Lanka.

Growing up during the Great Depression, John Exter saw his Chicago bond trading father lose everything when the US stock market crashed in late 1929. This shocking incident spurred a young John Exter's interest to study and better understand what factors were responsible for the Great Depression of the 1930s.

After graduating from the College of Wooster (1928-1932) John Exter went on to study at the Fletcher School of Law and Diplomacy and in 1939, to Harvard for graduate work in economics.

After a stint at MIT during World War II, Mr. Exter began work on the Board of Governors of the Federal Reserve System as an economist. In 1948 he first served as adviser to the Secretary of Finance of the Philippines, and then as the Minister of Finance of Ceylon (now Sri Lanka) to develop its central bank. He eventually became the first governor of the newly organised Central Bank of Sri Lanka in 1950.

In 1954 the Federal Reserve Bank of New York appointed John Exter as vice president in charge of international banking and gold and silver operations.

While speaking at the Detroit Economic Club in 1980, Mr. Exter stated that when he took charge of gold and silver operations at the New York Fed in 1954, US gold reserves were valued at $24 USD billion (gold was valued then at $35 USD oz). The attempt to contain gold prices soon followed. 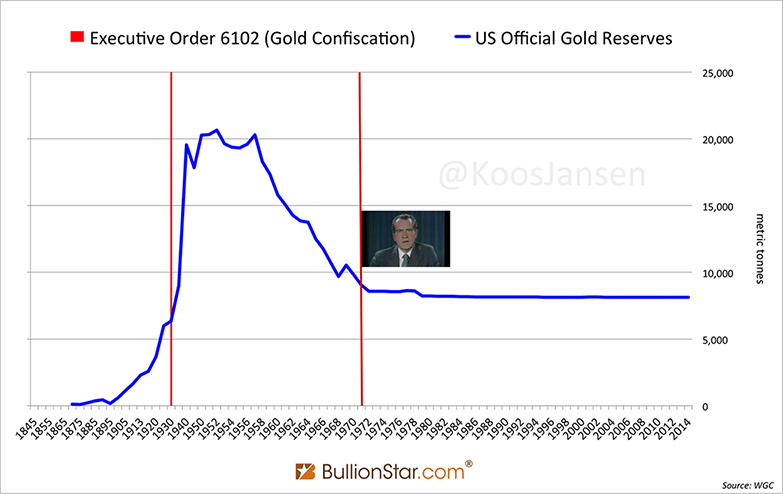 Shortly following Exter’s tenure at the Federal Reserve the Bretton Woods agreement was broken and the US dollar became a fully fiat currency without gold redemption by middle August 1971 (note Nixon’s head in the chart above).

Aside from the Swiss franc at the time, all other currencies had no ties to gold either. The London Gold Pool had failed to control the price of gold as France and other nations continually demanding gold over US dollars in balance of trade settlements.

Today, John Exter is mostly known for creating Exter's Pyramid, which he designed and used about 50 years ago to help visualize the organization of asset classes in terms of their overall risk of default (potential for bankruptcy) and overall notional value. 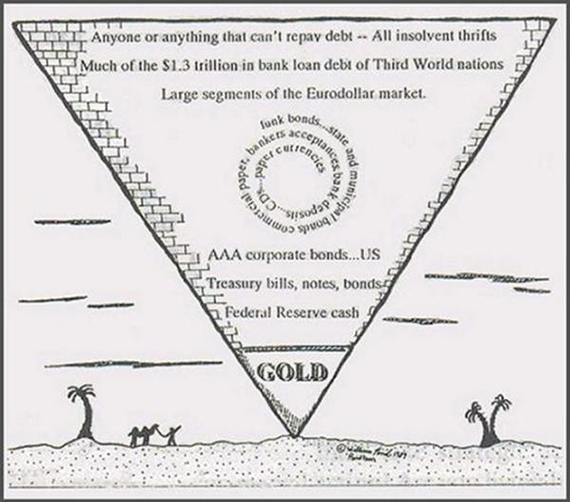 In Exter's original illustration, gold bullion forms the tiny base as the most reliable asset class, while other asset classes built on higher levels are progressively more risky.

The larger width of asset classes at higher levels of the inverse pyramid represent their larger total worldwide notional value at the time. Exter's original pyramid placed Third World debt at the top.

Today derivatives hold this questionable honor. Below is a more modern version. 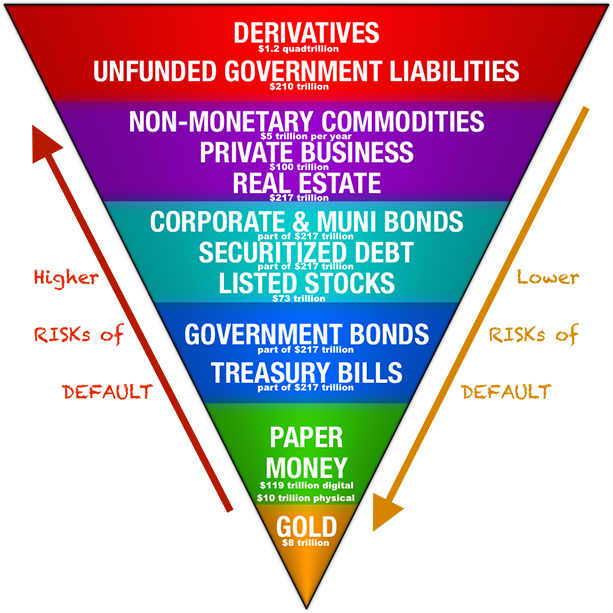 Exter’s debt pyramid has been able to keep expanding as financial innovation and economic financialization has introduced ever more leverage into the global economy.

According to Exter's model, those derivatives with the weakest and furthest links from base money are the first to be rejected and potentially bankrupted. As confidence vanishes and a broad based liquidation process ensues, higher risk asset class values cascade into their underlying collateral. The financial spillover effects flow down the pyramid even into the least risky securities and, near the tip of the pyramid, paper currency itself.

In crisis, paper currencies are unlikely to default in the short term within the nation states they have legal tender status in. But unlike physical gold bullion, government fiat currencies can be printed and devalued at will. Measuring the masses confidence in them is difficult to so, the breaking point it unknown. What is indeed known is that throughout history and without exception, all monetary proxies stemming from bullion eventually become worthless, given enough time.

Gold bullion forms the smallest base in the inverted pyramid of risk. This is because physical gold bullion is the most default proof asset an investor can own. It is for this reason central banks own 1 out 5 ounces of gold ever mined within their vaults.

Related to gold bullion, all other physical precious metal bullion items (silver, platinum, and palladium) are similarly default proof, as they are extremely scarce and do not require the performance of other parties to always maintain some measure of value in the financial market.

Finally below, a 3-dimensional rendering of the modern day Exter pyramid. Those large green walls represent stacked pallets of $100 US dollar bills. Illustrated at scale, each division of the inverted pyramid is drawn respective to the size of each asset class it represents. 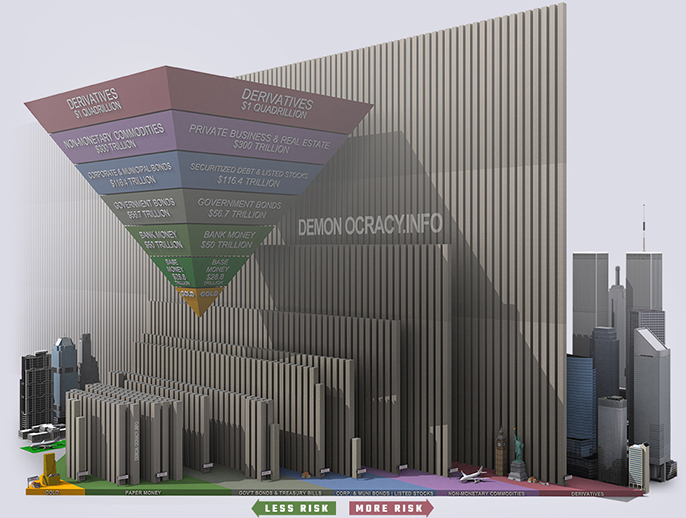 See if you can spot landmarks like the Statue of Liberty, the old World Trade Center Towers (hint: bottom right).

Now try to see the physical supply of gold bullion is at the tip of the pyramid itself (hint: bottom left).