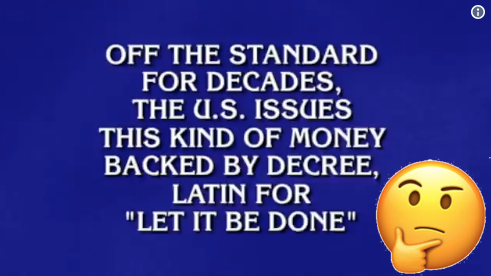 Come see below what happened on the TV game show 'Jeopardy' in early 2018 (episode 18) when the category of Gold Standard questions was undertaken by the contestants.

Test your knowledge and see which answers you know, and interestingly, which ones they certainly did not.

Alex Trebec: Alright let's get back into this, Eric.

Alex Trebec: Under the Gold Standard, the value of this circulating money, from Latin for "To Run", is linked directly to gold... Rachel.

Rachel: What is currency.

Alex Trebec: In 1821 Britain became the first adopter of the gold standard, dropping this metal from its bimetallic system... Del.

Del: What is silver.

Alex Trebec: Advocates say the standard acts as a check on this, caused by excessive issue of paper money... Del.

Del: What is inflation.

Alex Trebec: You are right.

Alex Trebec: To combat the depression, FDR moved the US off the standard shortly after taking office in this year... ... ... elected in '32 took office in 1933. Del back to you.

Alex Trebec: Off the gold standard for decades, the US issues this kind of money backed by decree, latin for "let it be done"... ... ... That's fiat money.

You can learn more about further differences between bullion vs fiat currencies here.

As for what historically happens when there is excessive fiat currency issuance vs official gold reserve backing for the US dollar we suggest you examine 20th Century history to better understand how this may again play out in this 21st Century.

Thanks for playing and for visiting us here at SD Bullion.