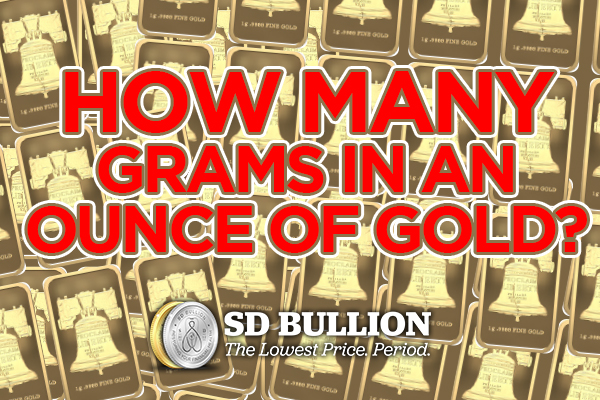 How Many Grams Are In An Ounce of Gold?

Although the name might throw some people off at first, the unit used to measure precious metals (troy ounce - ozt) isn’t equal in weight to the imperial ounces (oz) we commonly use here in the United States.

Hence, a 1 oz gold bar should therefore contain more than 31.103 grams of gold.

Why Does Oz vs Ozt Matter?

If you are calculating your gold bullion prices on an ounce basis instead of at troy ounce basis, then your math will be off by approximately 10%. In the gold industry, this is a big discrepancy!

Because the industry uses ounces as a basis in conversation, this can be a bit confusing. Because when someone says "ounce" they are technically speaking of a troy ounce. But now that you know this, you don't have to be confused any longer. Just know that the industry works off a troy ounce unit when speaking of ounces of gold or silver.

Even though no one can point to a specific year when or a specific place where the troy ounce system was born, its name seems to be taken from an old trade market in France called Troyes. Since this market was global at the time, it makes sense for them to have developed a global standard to trade with foreign merchants easily. This would allow everyone to agree on a standard price of gold per ounce.

Interestingly, the idea of the troy ounce might be even older than the Troyes trade market in France. Today, a troy ounce is equal to exactly one-twelfth of a troy pound. And the bronze bars used by the Romans in the Ancient Roman Empire weighed exactly 1 troy pound.

Coincidence? Many don’t think so. Several people argue that the French might have taken the Roman weight as a baseline when coming up with their own system of standard weights.

Nonetheless, the precious metals weight standards we use today were first used in England in the early 1400s – adopted from the French. The United States of America adopted this standard almost three centuries later in 1828.

How many Grams are in an Ounce of Gold?

First and foremost, the world most often measures gold bullion using either troy ounces or grams.

As well, we also give you a bonus piece of valuable information regarding common 22k gold bullion coin weights and measures.

To begin we will weigh how many grams are in this .9999 fine 1 oz PAMP Suisse gold bar.

Up next we will weight a common 1 oz Royal Canadian Mint gold coin comprised of .9999 fine gold bullion.

Note that it is common for both government and private gold mint products to err on the heavy side by containing an extra 100th gram or two of gold.

It is also very unlikely you will ever find genuine gold bullion products which do not contain a minimum of the troy ounce or gold gram weight stamped upon them.

This 22k gold eagle coin is made with an over .916 gold purity yet it also mixed with additional silver and copper inputs, to make it more more dent and warp resistant.

To ensure this 22k Gold Eagle coin indeed has its gold gram weight, we would simply multiply 33.95 grams by its .916667 purity resulting in an approximate 31.12 grams of gold contained.

We hope this article and video helped you better understand precisely how many grams are in a troy ounce of gold bullion.

You can learn way more about both Gold and other critical Precious Metals by getting our free 21st Century Gold Rush Guide instantly by email.