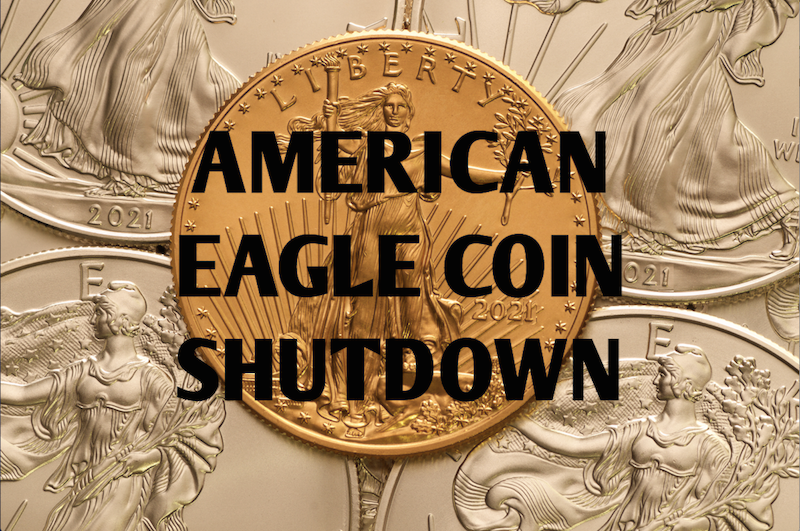 As is a regular yearly occurrence, the US Mint will be transitioning its most popular bullion coin production in early December. They will, of course, be changing out the old into the coming year’s coin dies.

Then the US Mint will begin stamping out enough 2020 coins for some advanced inventories for the now and early next year’s early Gold and Silver American Eagle bullion coin demand (orders are already getting placed).

Here we break down some big changes for the US Mint and its world-leading Gold Eagle Coin and Silver Eagle Coin programs and past sales volumes.

The Good & The Bad for US Gold Silver Savers

Over the last 55 years or so, the US Mint has debased our circulating coinage.

So much, so that old pre-1982 copper pennies are worth nearly twice as much in their copper melt value versus their face value. Like our old junk silver coins, those copper pennies will keep melting away in time as the law of supply and demand wins over human-made laws longterm.

Still, modern silver stackers buy pre-1964 Silver coins as they know our forefather’s coins that have yet to get refined into .999 industrial silver tonnage for use in gizmos and gadgets today are not likely to ever be minted again. Getting older silver coins near spot silver prices and relatively low priced .999 silver bullion while you can at today’s historically nowhere near silver price highs.

The good news was starting in 1986, the US Mint got charged with having to supply enough physical Silver Eagle Coins and Gold Eagle Coins to fulfill the public’s demand then ongoing.

Good news too, demand for the US Mint’s bullion coin program multiplied the 10os of million of ounces after investors around the world learned more about how unstable our global financial system truly is.

Bad news, in late September 2010, US lawmakers took the easy way out by modifying the original 1986 law, so that no longer was it the ongoing US public’s American Eagle bullion coin demand that deemed what amount of Silver and Gold Eagle Coins are necessary to have ready to sell.

From late in the year 2010 forward, it has been merely the prerogative of the sitting US Treasury Secretary to glean what amount of Gold and Silver Eagle Coin supplies are sufficient.

Not surprising from 2010 through this year 2019, our industry has worked through handfuls of Silver Eagle Coin sellouts, temporary shutdowns, silver bullion coin rationings, and silver price premium blowouts, followed by then contractions lower. 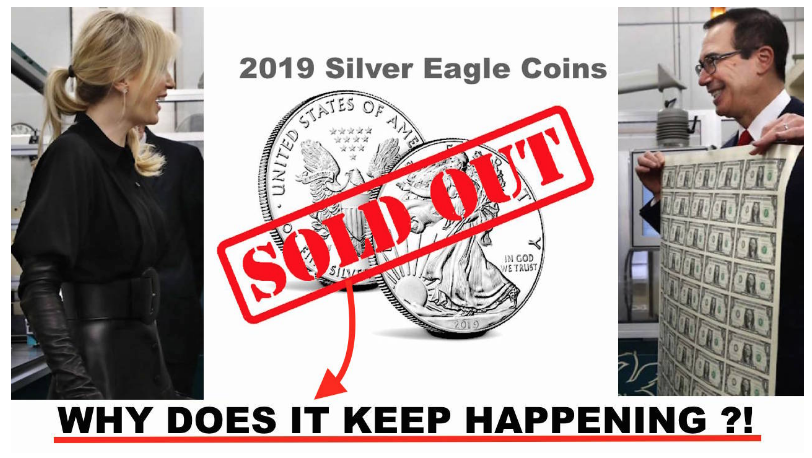 A bit more on WHY ^ Silver Eagle Sellouts ^ have become normalized

The bullion industry is unpredictable.

Sales can come out of seemingly nowhere like gangbusters and then up and vanish like the supposed 2019 rate hike cycle and now QE4 Overnight Repo Loan Federal Reserve policy.

We will end this starting segment on some good news.

Recently, US Treasury Secretary Steve Mnuchin made an excellent choice to finally redesign and incorporate some anti-counterfeit technology into the most popular gold and silver bullion coins by sales volumes in the world.

Chinese bullion counterfeits are an issue that has hurt our industry for almost one full decade now. The US Mint has sat on their hands regrettably until about a year from now.

Better late than never though.

This means the coming 2020 Silver Eagle Coins and 2020 Gold Eagle Coins will be the final thirty-fifth consecutive date-changed-only version of this most purchased silver bullion and gold bullion coin format.

The 2021 Silver Eagle Coin and 2021 Gold Eagle Coin versions will both have anti-counterfeit designs yet to be released publically.

Below you can hear from US Mint Director David Ryder explaining how there will likely be three levels of security featured in the coming 2021 Silver Eagle Coin and 2021 Gold Eagle Coin anti-counterfeit redesigns.

Silver Eagle Coin Redesigns Should Have 3 Levels of AntiCounterfiet Measures

Both Silver and Gold Eagle Coins got first released in 1986.

Since the cyclical bear market bottom in recent silver price history and gold prices in late 2015, there have been many older secondary Silver Eagle Coins and Gold Eagle Coins sold back to the bullion industry. People who likely bought hype with no fundamental understanding of how long term bullion can be.

Typically, most older used Silver Eagle Coins and Gold Eagle Coins from high mintage years are sold at lower prices than the newest year of issuance.

Consequently, new US Mint Silver Eagle Coin and Gold Eagle Coin sales volumes have dropped by about half since 2008-2016 heydays due in no small pickup in older bullion coins being sold back into bullion dealer inventories.

From our company’s inception in 2012 through the end of 2016, typical new US Mint silver and gold bullion coins sales far outweighed the amount of older bullion coin sales.

This increased sell back phenomenon has compressed physical precious metal price premiums over the same timeframe.

We believe this multi-year inventory glut situation won't last once we clear $2,000 oz gold and near $50 oz silver again. Weak hands will likely be gone and have sold off their bullion stacks within the first half 2020s as we near-record old silver prices again. 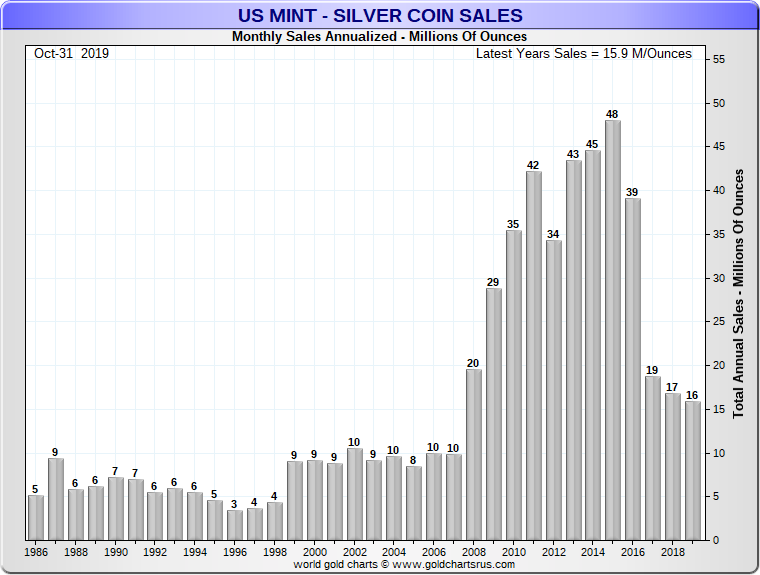 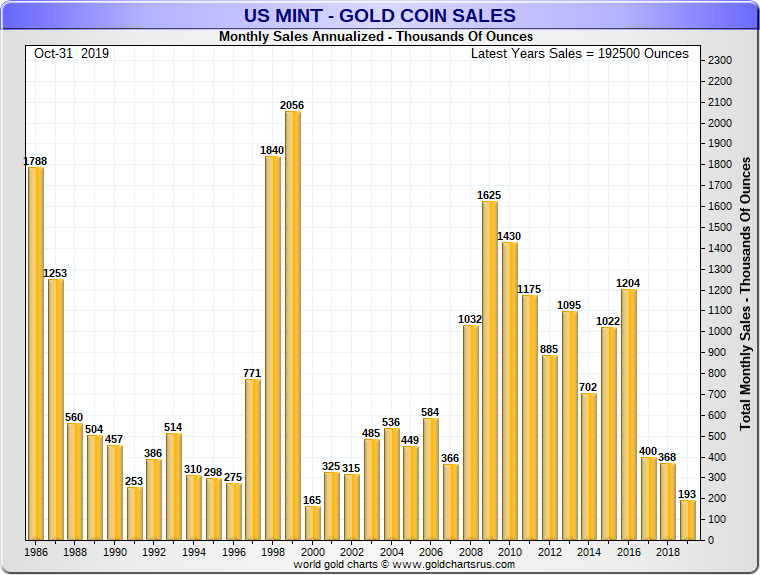 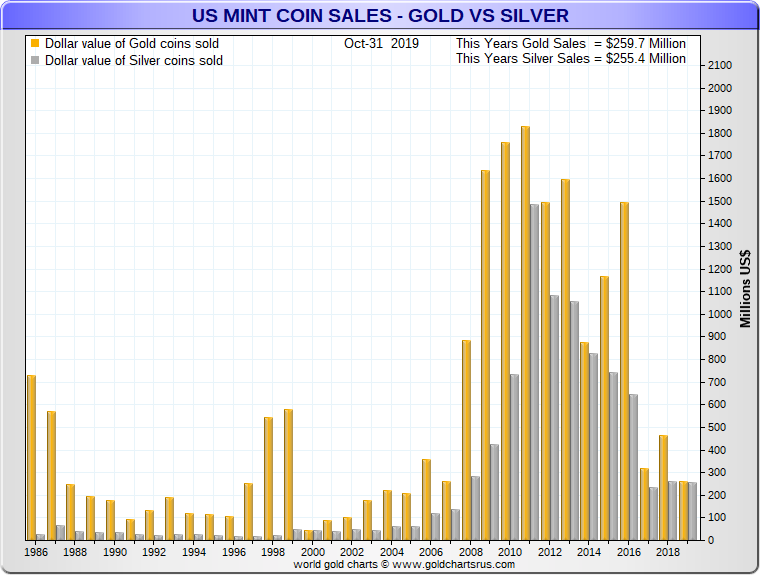 We expect the fiat US dollar gold price will again climb back above $1,900 oz early in the coming decade (the 2020s) with new silver price highs to follow shortly.

By the time new record silver and gold prices happen, most of the secondary bullion coin sales volumes will likely have lessened as strong hands will hold bullion for longer-term reasons than mere break-even and or a few fiat US dollars in nominal profits.

As a result, new US Mint Silver Eagle Coins and Gold Eagle Coin sales with anti-counterfeit designs post-2021 should be active as a result of all contributing factors mentioned.

To learn more about the four primary physical precious metals, be sure to pick up our free SD Bullion Guide.

Thank you for visiting us here at our SD Bullion blog.