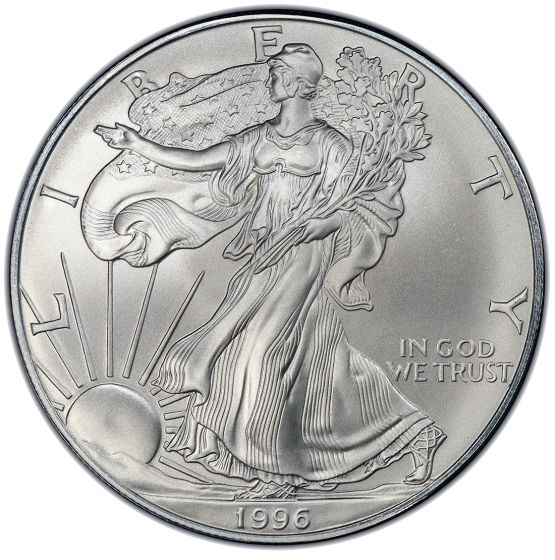 SD Bullion offers these 1996 Silver Eagle coins at the lowest price in the industry, guaranteed. This is the 10th coin in the world-renowned series of Silver coins, the American Silver Eagles. Even though they feature higher premiums compared to the recent releases in this series, they are extremely sought after by collectors and investors alike due to exceptionally limited mintages in that period.

These coins are minted by the United States Mint, a mint that is trusted by millions of people, not just in the United States, but around the world. They have run this annual coin series from the year 1986, and these coins have only gained in popularity ever since.

Each coin is minted with 1 troy ounce of pure Silver and features the iconic Walking Liberty Half Dollar design. In fact, it is a widely-recognized and admired design all over the world.

Its obverse shows the Lady Liberty, wearing a flowing gown with the American flag draped around her shoulders. Her arms open to welcome, signifying the welcoming nature of this great country. A rising sun can be seen in the backdrop, giving the coin an elegant and pretty motif in addition to several intricate engravings.

These 1996 Silver American Eagle coins make thoughtful and valuable gift items for those who are interested in beautiful American designs engraved on precious metals. Considering the fact that these coins tend to become more sought after year after year, investors tend to covet these Silver coins to solidify their tangible investment assets.