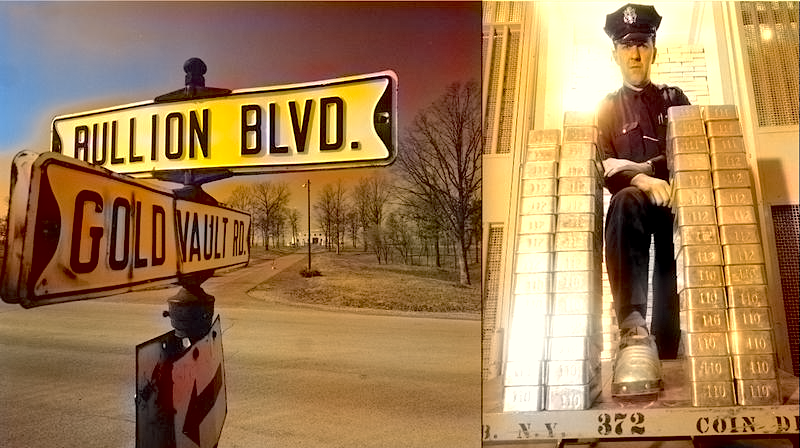 How much Gold does the US have?

The Department of the US Treasury records official US gold reserve at the values stated in 31 USC § 5116-5117 (statutory rate) which gets held to this day at $42.2222 USD per Fine Troy Ounce of gold.

The ongoing market value of the physical gold reserves held based on the fluctuating gold spot price as of February 13, 2019, was $344.4 billion USD.

Below we will break down where in the United States this gold is supposedly stored and in what quantities.

As well, we will show you a bit of shade on the supposed Fort Knox gold holdings, as its historical audit trail since the 1933 gold confiscation is dubious at best. 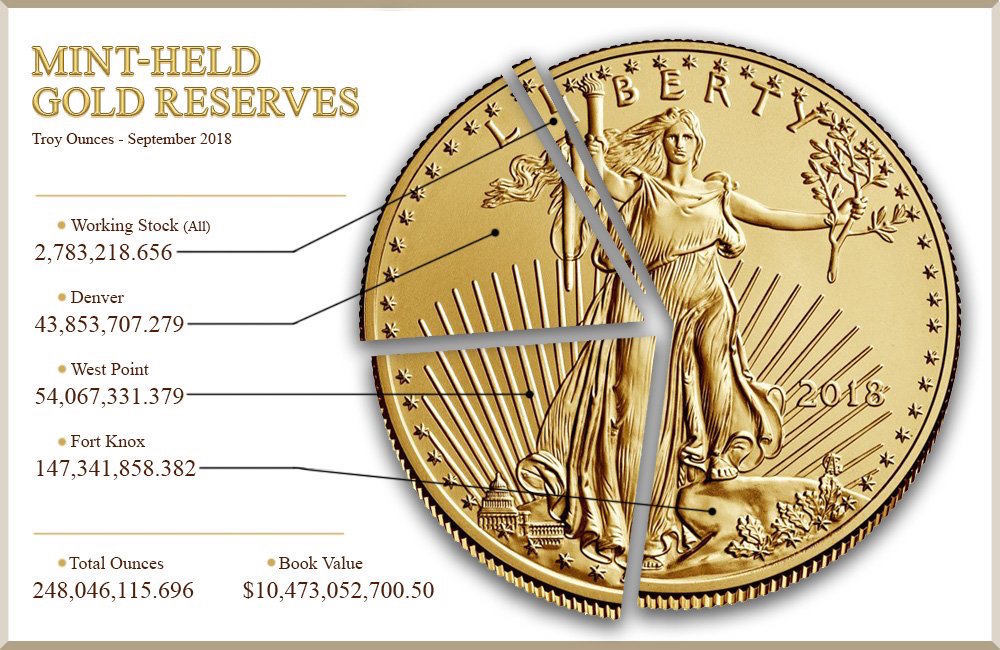 This graphic shows the amount of USA gold reserves held between Fort Knox, the US Mint at West Point, and the US Mint in Denver.

These numbers get taken from the Bureau of Fiscal Service’s website, which updated the US Gold Reserve data regularly.

Working gold stocks get defined as the portion of the government US gold reserves which the US Mint uses as the raw material for striking congressionally authorized bullion and collectible gold coins. The US gold reserve working stock consists of gold bars, gold blanks, unsold gold coins, and condemned gold coins.

The US Mint strikes various gold bullion coins at both its Denver and West Point mint locations.

Fort Knox remains the dominant gold vault choice for the majority of US Gold Reserves.

Before World War 2, the US gold reserves were more than two times the size they are now.

Following the 1933 gold confiscation and 1934 near -70% US dollar devaluation to gold, the United States built its Official Gold Reserves to a peak of over 20,000 tonnes or over 643 million troy ounces of gold by the early 1950s.

During the 1960s, tens of thousands of US gold reserve tonnes were spent (mostly shipped to London and Europe) in an ongoing attempt at suppressing the price of gold near the official $35 oz USD price. By late 1968 gold was being demanded by many of our foreign creditors over US dollars, thus causing our monetary system to be changed to full fiat currency standard shortly after that.

The following video clip shows then France's President calling the debasing US dollar out.

With the failure of the price rigging London Gold Pool and the subsequent closing of the 1971 gold window, the US Gold Reserves have remained relatively flat since.

No official third-party audits of US Gold Reserves have taken place since the US dollar went fully fiat-backed by faith, credit, and arguably force.

This lacking US gold reserve audit fact ramps up speculation and increasing doubts as to whether or not the US Official Gold Reserve figures are indeed accurate. Many believe US gold reserves have been lost and or are encumbered by gold leasing programs which were ramped up in the 1990s (i.e., leading to significant discrepancies between daily western vs. eastern gold price action).

Average US citizen's confidence in our nation's supposed gold holdings is likely near an all-time low. Trust in institutions and private central bank credibility are also at all-time low points in our national history.

Even our current US President, while running as a candidate in 2016, was making the following recent statements in the public domain.

Donald Trump in 2016 regarding US Gold Reserves

None of the facts and points above, change the truth that 22k US Mint American Gold Eagle Coins remain the top choice of gold bullion coin buyers in the USA and around the world (based on government mint sales data).

US Gold Reserves used in US Gold Bullion Coin Program

The US Mint began striking the American Gold Eagle Coin in 1986, and the Gold Eagle coin remains the official 22k gold bullion coin of the United States of America.

The US government guarantees American Gold Eagles contain the stated amount of actual gold weight in troy ounces in each gold coin.

Since their inception, over 20,000,000 ounces of Gold American Eagle coins have gotten purchased by gold investors and coin collectors around the world.

The ongoing question of how much US gold reserves we officially have according to the US Treasury’s website updates versus speculation on the reality will likely remain.

Below is a well-researched example of what we are referring to, as there are just only too many holes in the Fort Knox Gold trail for average US citizens to have full confidence.

Do not hold your breath for an officially conducted third-party audit of US gold reserves ever.

Own a prudent gold allocation as the current fiat US dollar loses value to gold in the years to come.