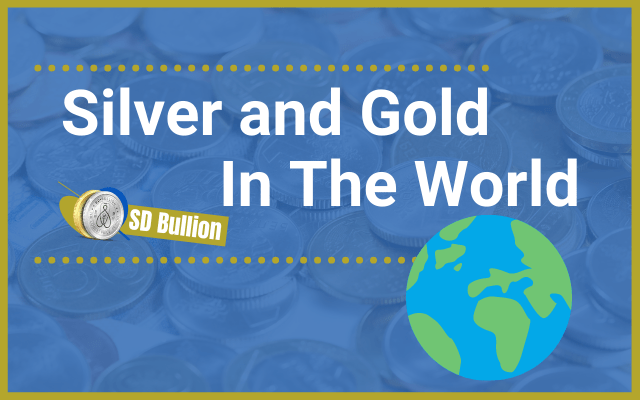 How much Silver and Gold is there in the World?

Combined geological, aggregate mining data, and verifiable historical records from the World Gold Council show that about 190,000 metric tons of gold and some 1.6 million tonnes of silver have been mined physically throughout history from the Earth's crust.

Of course, there are many times these amounts of supposed silver and gold traded virtually every year on precious metal derivative exchanges found in London, Chicago, New York, and elsewhere. They are mostly buying and selling electronic promises and bets, not the two precious physical things.

What we will examine here is the actual amounts of physical silver and gold which have gotten mined and extracted from the Earth. How many metric tons of gold supply remains in .999 fine investment-grade form on the surface of the Earth?

Currently, we humans mine about 8-parts of silver to 1-part of gold ore globally. In other words, for each metric ton of gold production, there are 8 metric tons of silver. As of November of 2021, the gold-silver ratio has been fluctuating between 75 and 80. It reached an all-time high of 122 in the outburst of the quarantine in March of 2020.

Central banks, for instance, have been buying gold bullion since the 2008 financial crisis. They do this because they too know the history of fiat currencies falling apart.

How Much Gold vs. Silver gets Mined?

Most of the world's silver ore deposits are spread thinly throughout the Earth's crust, and much is not profitably recoverable at these current silver price points. Consequently, the vast majority of physical silver mine production comes to the market as a byproduct of other mining efforts (e.g., gold, zinc, copper).

Although not highly transparent, there are some reliable data published on total above-ground silver bullion and gold bullion levels. Much can also be deduced by all-time gold mining companies’ data and standard percentages of physical silver and gold production (industrial vs. jewelry vs. bullion).

By the end of this piece, we will attempt to answer the question:

“How much Silver Bullion and Gold Bullion is there in the world?”

How much Gold is there in the world?

The following chart provided by GoldChartsRUs.com shows the amount of physical gold extracted from 1835 - 2016.

Thus there are just slightly more than 6 billion troy ounces of gold above the ground amongst human beings mostly in jewelry (approximately 50%), followed by .999 fine bullion form (approx. 40%). Governments hold about one-half of the investment-grade gold bullion supply around the globe.

With the Chinese government currently underreporting their "Official Gold Reserves" by a likely minimum of some 10,000 tonnes, it is safe to assume that more than 1 in 5 troy ounces of all the physical gold ever mined is currently being saved by governments and their central bank partners today.

The reason governments buy-own-and-hold-gold long term is simple. All human-made currency proxies eventually fade to a valueless state, while gold bullion never bankrupts nor becomes worthless. The United States is, by far, the country stockpiling the most gold reserves. Reports from June of 2021 indicate 8,133 tonnes of gold. Other top 10 countries with the most gold holdings include Germany, Italy, France, Russia, China, Switzerland, Japan, India, and the Netherlands.

If you are wondering how much gold in the world is left to be mined, approximately 54,000 tonnes of gold ore is estimated to still be below ground.

In summation, there are about 2.5 billion ounces of gold bullion above ground today in the world.

Again more than half of it is currently owned by governments and their central bank partners. Many of them can still buy gold bullion by merely creating their currency out of thin air if they so choose.

How much Silver is there in the world?

The following chart provided by GoldChartsRUs.com shows the amount of physical silver, which has been extracted from 1835 - 2016.

Silver is different from gold in the sense that it has many more industrial uses (second only to crude oil in real-world product applications). Thus, the vast majority of all the physical silver we humans have ever mined has been exhausted through industrial applications, thrown out into landfills unrecovered.

Thus there have been just slightly more than 50 billion troy ounces of silver mined in history. Again, most physical silver mined over time has been lost to industrial use and gone unrecycled.

According to their data, there is now over 2.78 billion ounces of .999 fine silver bullion currently being held amongst silver vaults, silver ETFs or ETPs (i.e., exchange-traded funds/products), government silver hoards, industrial silver stockpiles.

What this data doesn't take into account is that private silver bullion coin and silver bar investment offtake and mainly record volumes of .999 silver bullion buying which has taken place since the 2008 Global Financial Crisis.

Most government silver bullion coin-producing programs began in the 1980s.

Thus, we must consider all-time total sales of all significant government silver coins as well as private silver bullion bars and silver bullion rounds sales over this same period. Then we can accurately estimate the total amount of .999 silver bullion there is in the world.

With available data, it is conservative to estimate that there are about 4 billion ounces of silver bullion in .999 silver bullion form being held by investors around the globe.

On the other hand, to answer the question of how much silver is left in the world unmined below ground, the US Geological Survey estimates a total of around 530,000 tonnes of silver still untouched by mining companies.

These are the countries that are estimated to have the most natural reserves of silver not yet mined:

“How much Silver Bullion and Gold Bullion is there in the world?”

By the end of 2018, there was approximately

2.5 billion oz of Gold Bullion and

4 billion oz of Silver Bullion in the world.

The following updated Exter Pyramid takes into account all the physical gold available above-ground (this includes about half of which is in gold jewelry at the moment).

At the current spot price of gold, there is about fully fiat valued USD 4.6 trillion in gold bullion in the world, while there is around another full fiat currency valued at USD 100 billion in silver bullion held by global investors and governments.

Respectively both these silver and gold bullion valuation sums (especially with silver bullion) are dwarfed by the total valuations for debts, real estate, fiat currencies, and derivatives worldwide.

Given current undervaluations of gold and silver bullion relative to other financial assets and real estate, now is likely a perfect time to be buying bullion as a long-term store of value (i.e., dependable money over human history).

If you are an investor and want to learn more about either silver or gold investment, we suggest starting with the following short videos and then possibly picking up our free SD Bullion Buying Guide, a great source for new gold investors.

Recent data from the World Gold Council shows that in 2020, the total amount of gold production was 3,478.1 tonnes (122.7 million ounces). The ninth year in a row that it surpassed the mark of 3,000 tonnes of gold mined. Here is a breakdown of how much each country from the top 10 gold-producing ones mined in 2020.