Gold Accountings of US dollars

Every 50 years or so, market forces give the US dollar a full gold accounting by her Official US Gold Reserves. Learn what this data portends for possible future gold values in Federal Reserve Notes, aka US dollars.

Try searching the terms “gold vs dollar” and you will be met with confusing charts likely measuring gold’s US dollar spot price vs the US dollar index (DXY).

Do not get confused. The DXY is merely the fiat US dollar measured against other debasing fiat currency units which all eventually lose in the battle against gold bullion over the long haul. No gold bullion or other finite resource is involved in that smokescreen measurement of currency strength.

The United States along with many welfare-state western governments will most likely further devalue their legal tender fiat currencies to more easily fund growing deficits and unfunded liabilities. Bullion prices are typically the beneficiary of such actions ultimately. 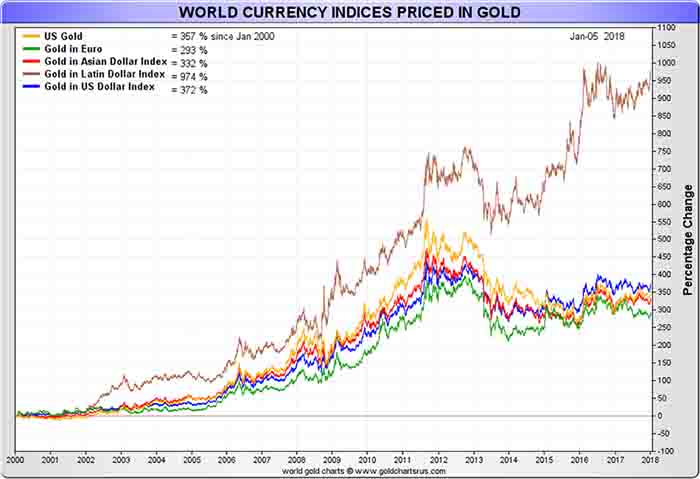 Explicit talk that the US could simply kill the dollar’s value to nominally meet its unfunded liabilities and avoid an outright “legal” default are serious and valid given the staggering legally-binding promises accrued. Sure younger US citizens will most likely still get their social security checks someday, but there is still no guarantee as to to what those funds will be able to buy in real world goods or services (Universal Income fights ahead).

In the years to come we will more than likely witness some twisted mix of eras and turbulent time frames from our nation’s past, echoing ahead in likely further financial repression and potential stagflation 2020s.

The most recent example of the US dollar’s losing battle against gold bullion, was during the 1970s and early 1980 time frame when the USD price of gold hit levels high enough to fully back all US dollars by the nation’s self-proclaimed official gold reserves which are purportedly held in Fort Knox, West Point, and elsewhere by the US government.

After the US government devalued the US dollar some 70% to gold in 1934, the then total US official gold reserve value eclipsed over 40% of the US monetary base in circulation for many years to follow.

It was only after private gold holdings were nationalized, collected on, and paid out at the then $20.67 USD oz price in 1933 that the government took advantage of its citizens by devaluing the then US dollar some 70% to gold in early 1934. Eventually a fixed $35 USD oz gold price was settled upon which lasted into the late 1960s.

It was in April 1933 that US citizens were first coerced under threat of potentially large fines and long imprisonments, to turn in their private gold holdings. Over 10,000 tonnes of privately held citizen gold was discharged from the US citizenry within one year’s time.

A then maximum limit on gold bullion and non museum-rare gold coins that an individual citizen could hold at the time was set to no more than 5 troy ounces.

It wasn’t until 1975 began, that US citizens were again allowed to hold more than 5 oz of gold bullion privately. Less than 3 ½ years after President Nixon closed the last ties of the US dollar to gold, the price per ounce was already at $185 USD oz.

Recently released US Department of the Treasury cables from 1974 suggest that the 1970s COMEX and other futures markets were intended to be volatile, to help discourage large scale bullion hoarding by citizens.

Today there is an ongoing mantra by central bankers and their mainstream media parakeets claiming their 2% inflation targets are not being met (just ask those who pay health care and college tuition costs if that is indeed the case). Some are even arguing 4% inflation targets should be set as they claim benefits would outweigh the costs.

Regardless, inflation will arrive one way or another. Even respected financial institutions like bond trading giant PIMCO, have recently suggested the Federal Reserve play a similar 1933-1934 card. The Federal Reserve and US government could aggressively reprice and buy private gold hoards today at a $5,000 oz USD price levels to help spur about higher 2-3% inflation targets. These suggested actions are often argued to help ultimately deleverage and lower the future costs of all US debts and unfunded liabilities accrued over the last half century or so. The unintended consequences of such actions are truly unknown.

A price of $5,000 oz gold today would come close to and even possibly achieve backing 40% of the US monetary base per capita with US official gold reserve value (see the chart below). Such a last ditch effort would most likely bring about price inflation, but at what cost and could it be contained afterwards?

Would the US government offer citizens $5,000 USD oz gold only to devalue the US dollar to gold another 70% some time later? 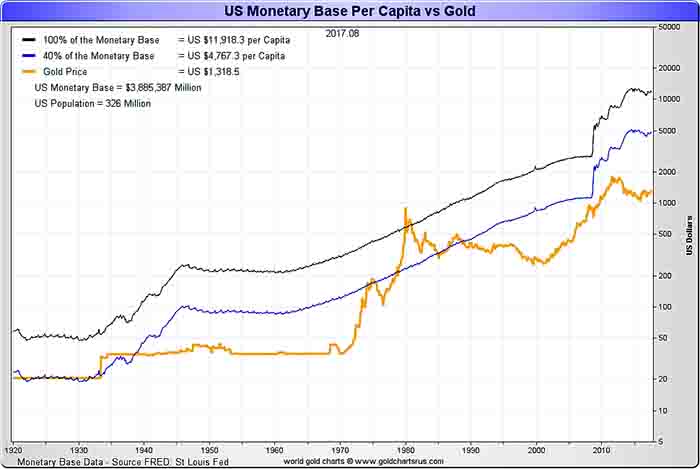 Since today there are prohibitively more US dollars in circulation than in either 1934, 1974, or 1980. For to history to simply repeat, gold would need a much higher 4-figure or even 5-figure US dollar price per ounce to respectively achieve either a 40% or 100% backing of official US gold reserve values vs current US dollar monetary base per capita figures.

Given the fact that the world’s largest two economies, both China and the United States ultimately both need and likely therefore want to devalue their respective fiat currencies over the long run. It would not surprise many to one day witness a gold price arbitrarily set many multiples higher than it is today. Expect further monetary authority calls for a gold laced Bretton Woods II meeting as the next large financial recession and possible crisis ensues.

When the time is right, China will likely declare a more accurate official gold reserve figure which they have accumulated over the last few decades from their global gold mining operations and western gold bullion imports. This amount will likely be many multiples of what it officially claims today, her likely intent to bolster the perception of the yuan’s value and China’s place in a more wide ranging, multipolar, monetary powered world.

While presidential candidate Trump openly voiced doubts over our nation’s 8,133.5 tonne official US gold reserves in 2016. He also exposed some childish notions of how gold could be repriced to regain confidence during financial crisis (note his ‘crash-o’ deflationary error at moment 1:06). Regardless of whatever happens, do not expect a legitimate official US gold audit ever. Just perhaps more token PR stunts like the recent Fort Knox solar eclipse debacle.

All these twists and turns behind and ahead, nothing changes where this ultimately ends.

The US dollar is readying to lose another battle to gold with much higher per ounce prices ahead. The seeds have been sown decade after decade. The price per gold in US dollars per ounce should eventually make 1934 and 1980’s highs look like pennies and dimes on a dollar respectively.