Last week we witnessed one of the most controversial economic releases in years from the Bureau of Labor Statistics. To say the Employment Situation Report for May 2020 was a shocker is putting it lightly.

While nearly everybody was in agreement that there would be millions of job losses in May, it was only a question of "how many millions"?

Last Wednesday, the ADP National Employment Report was released for May 2020, another monthly jobs report, conducted by the private sector as opposed to the government, and the number came in at around 2.75 million jobs lost nationwide in the month of May. Two days later, however, with the release of the BLS Employment Situation Report, the number was around 2.5 million, only instead of job losses, those were job gains in the month of May!

It was quite the shocker, and here's what it looks like visually after the job loss shocker from April:

President Trump even held a press conference last Friday to discuss, among other things, the job gains from the month of May.

Needless to say, there is much debate as to whether the numbers from the government's report are accurate or not.

Some problems analysts have pointed out with the numbers in the report include:

Regardless, silver sold off on the news on Friday as the mainstream financial press was once again talking about a "V"-shaped recovery: 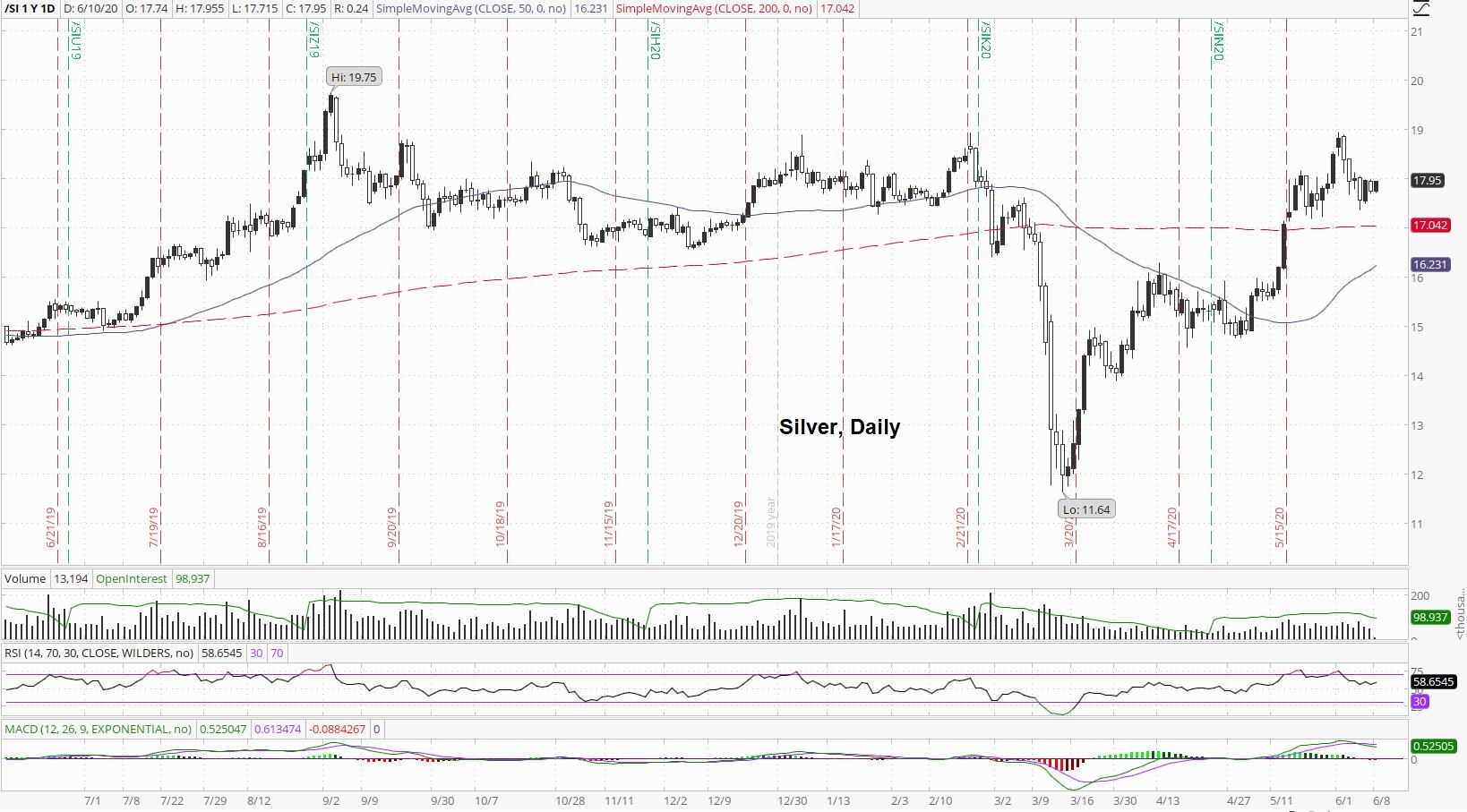 It should be noted that $18 is acting as some nice support for silver right now.

Gold also sold off on Friday, but not only recovered its losses, but the gold price is up post-BLS Jobs Report: 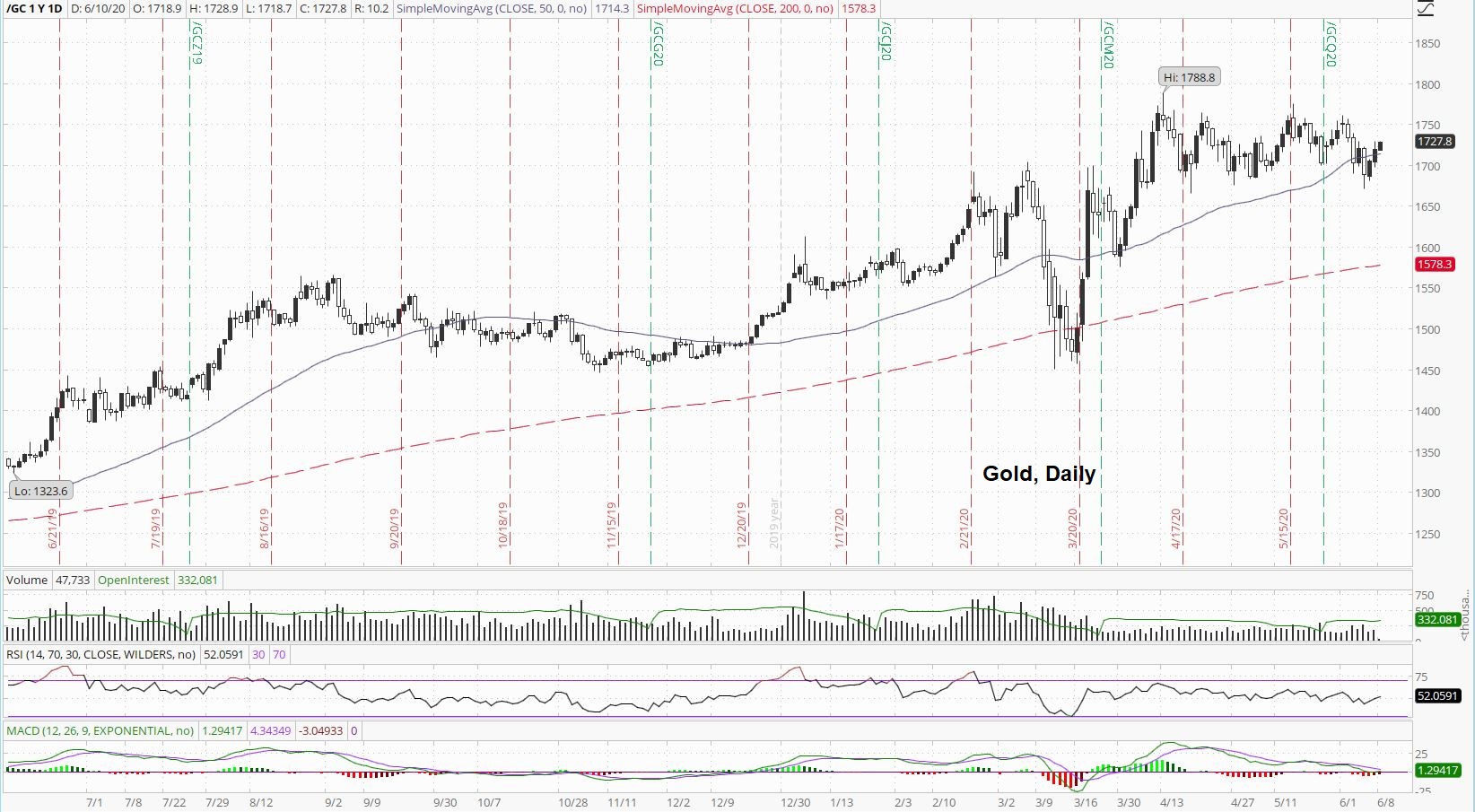 If gold is weighing in on the Jobs Report, it would seem that gold does not believe the jobs report as genuine.

This sell-off brought about a slight creep higher in the paper gold-to-silver ratio: 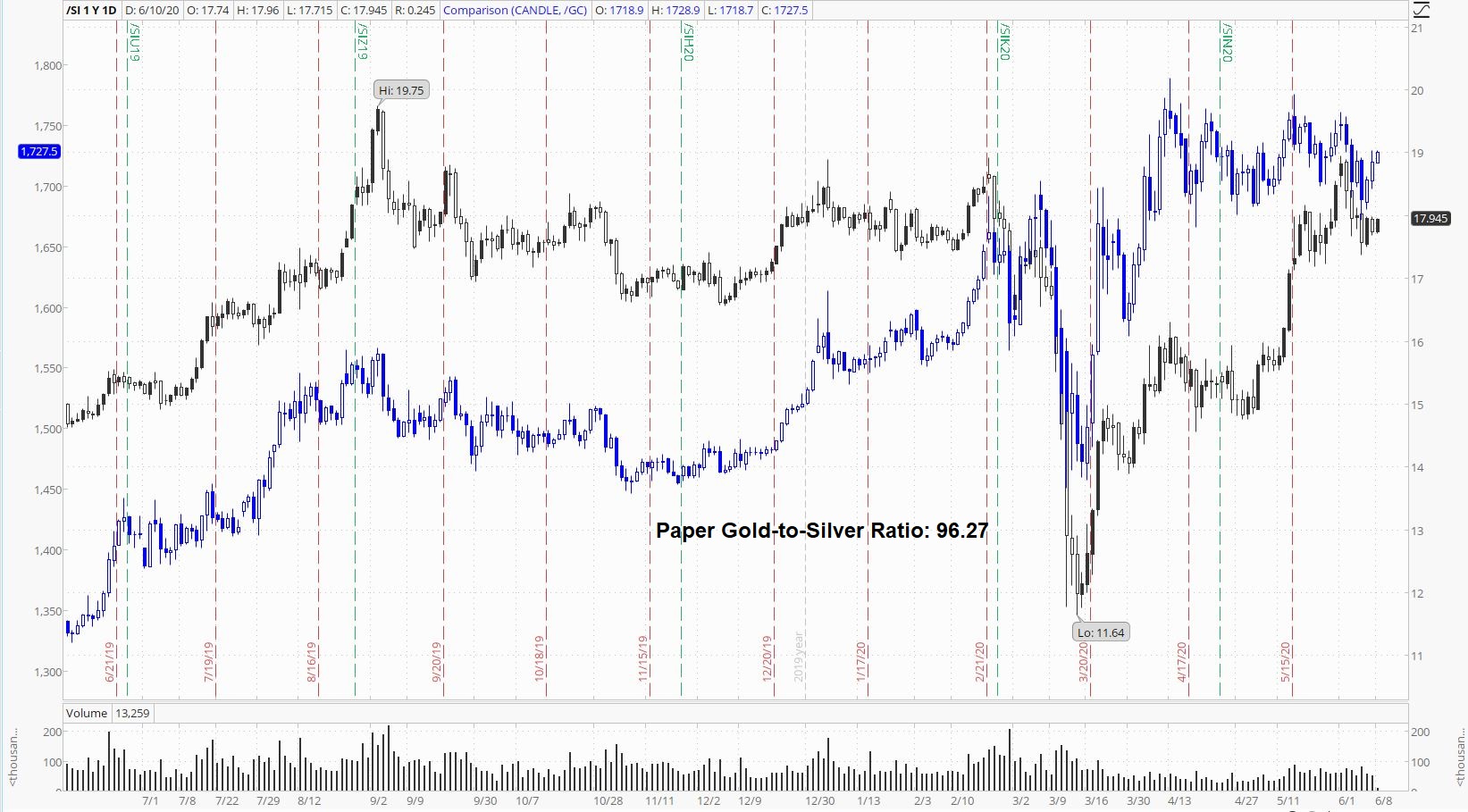 Notice the gold-to-silver ratio has crept-up because gold is moving higher, and silver has yet to make its move.

At first glance, palladium's chart is rather bearish: 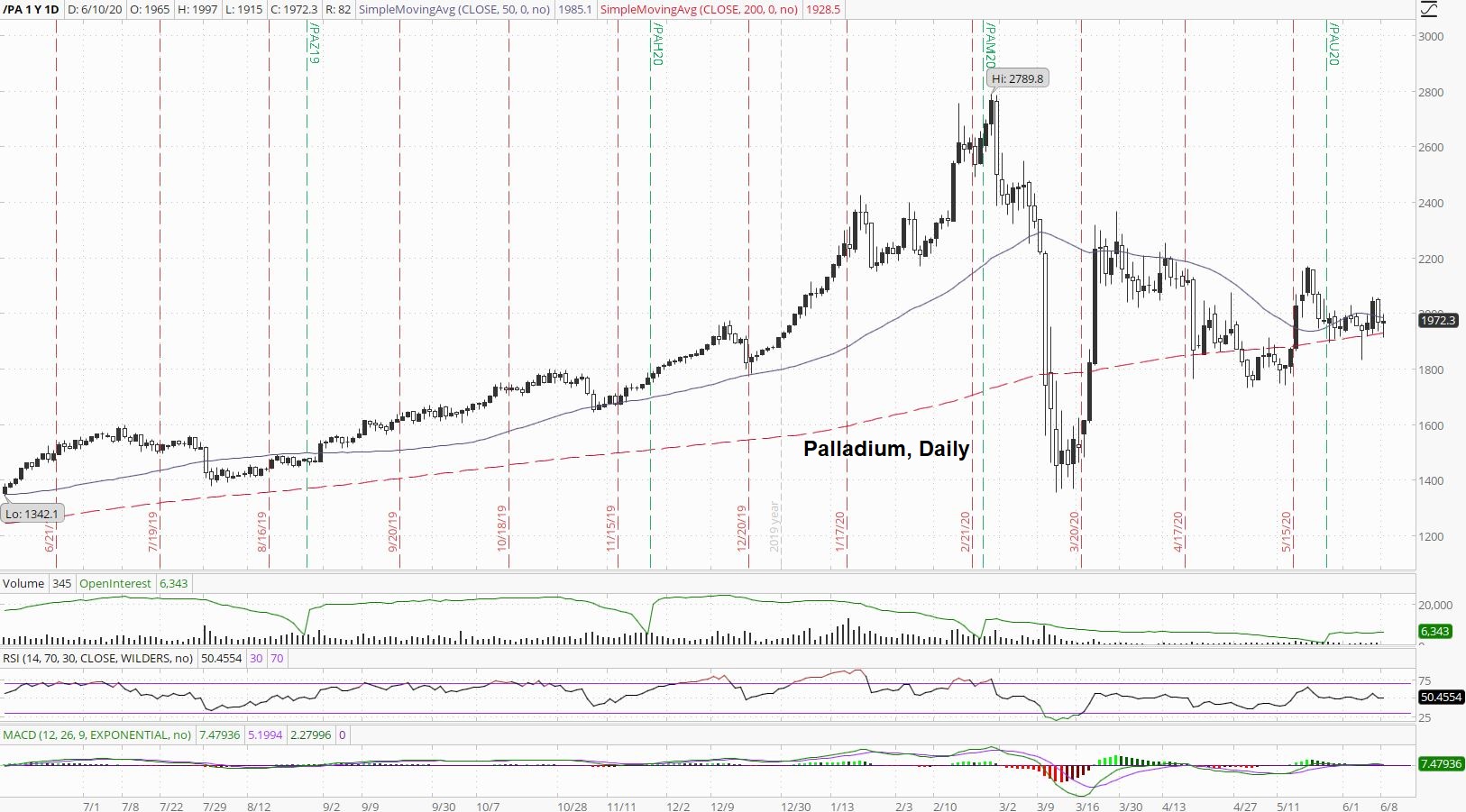 Although we could say palladium is putting in that all-important first "higher-low", which is critical for there to be a trend-change from bearish to bullish in the short-term.

Platinum has retreated slightly from its 200-day moving average: 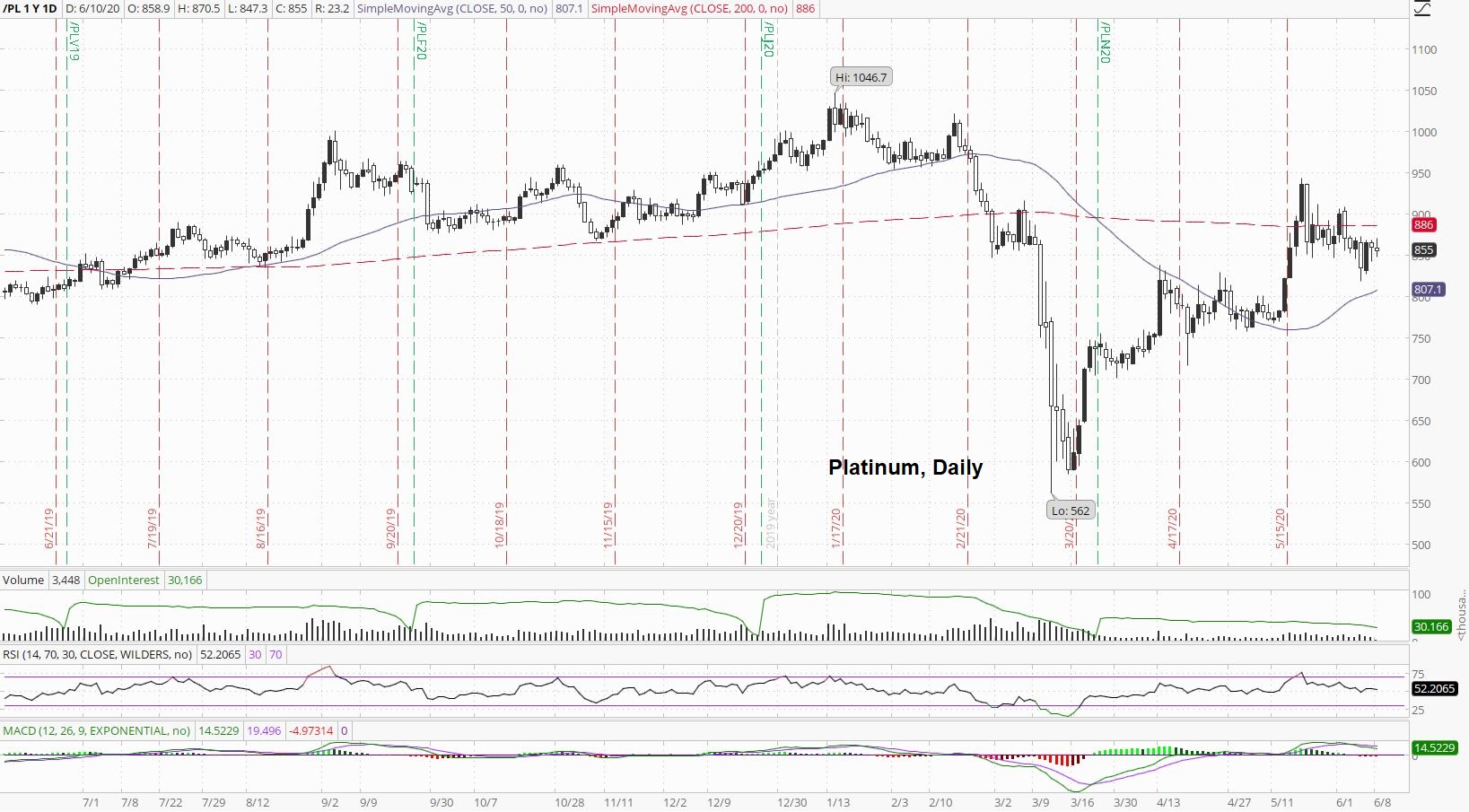 If we see gold & silver breaking-out, the next time platinum faces-off with its major moving average, we could see platinum blow right through it.

Copper has been climbing a Wall of Worry for months, and now, it appears that copper is breaking-out: 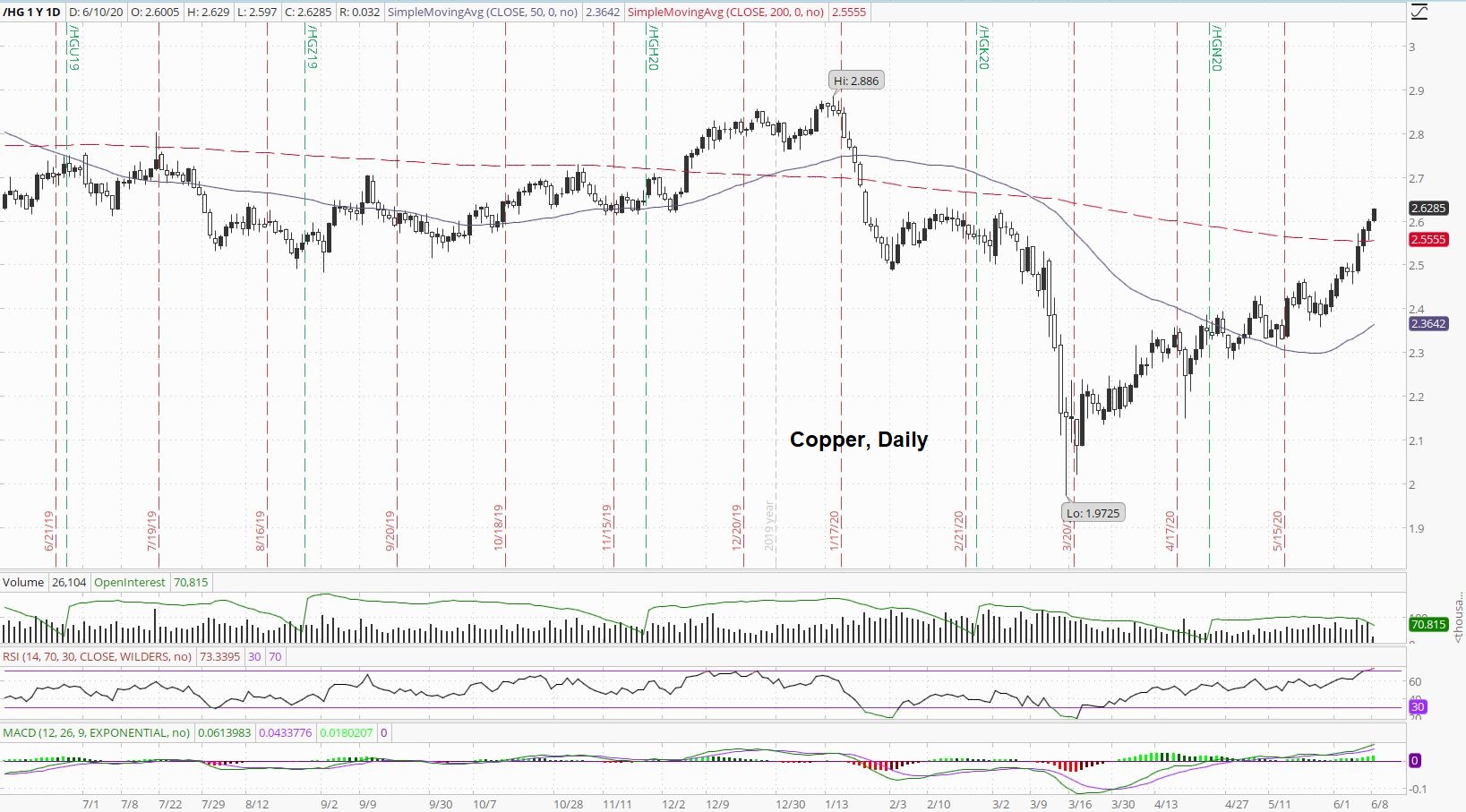 With the price action in copper, would it be too far of a stretch to say the era of commodities price inflation has begun?

Crude oil appears to have hit a wall at $40 per barrel: 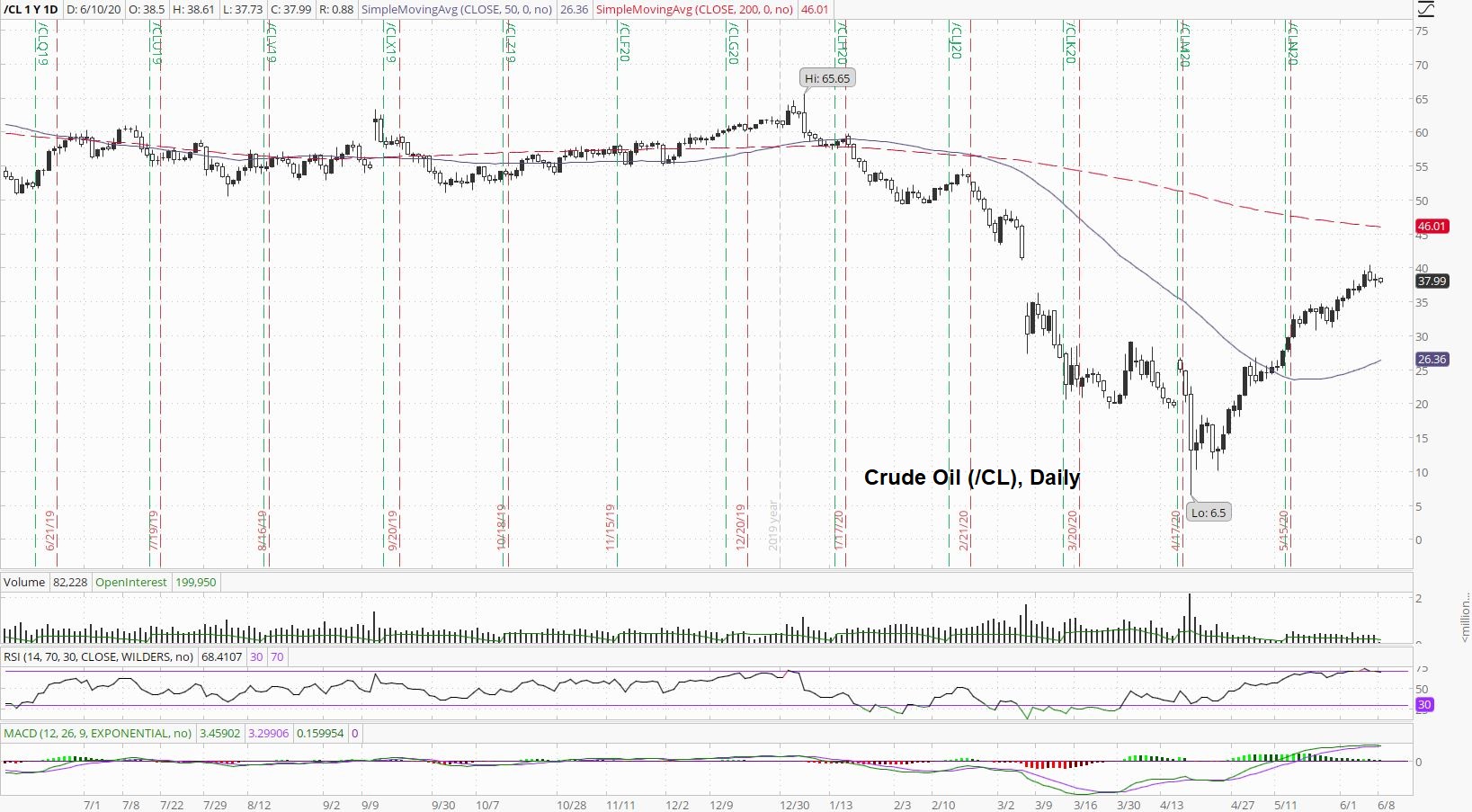 For those keeping score, we are still a few dollars away from filling the gap.

Today, Wednesday, the Fed concludes its 2-Day June FOMC meeting, which will be followed by the release of the FOMC Statement and a press conference given by Fed Chair Jerome Powell at 2:30 p.m. EST.

Some significant things have happened since Powell's last FOMC Press conference, including, in no particular order:

All the while, the NASDAQ crossed 10,000 for the first time ever yesterday, hitting fresh, all-time record highs: 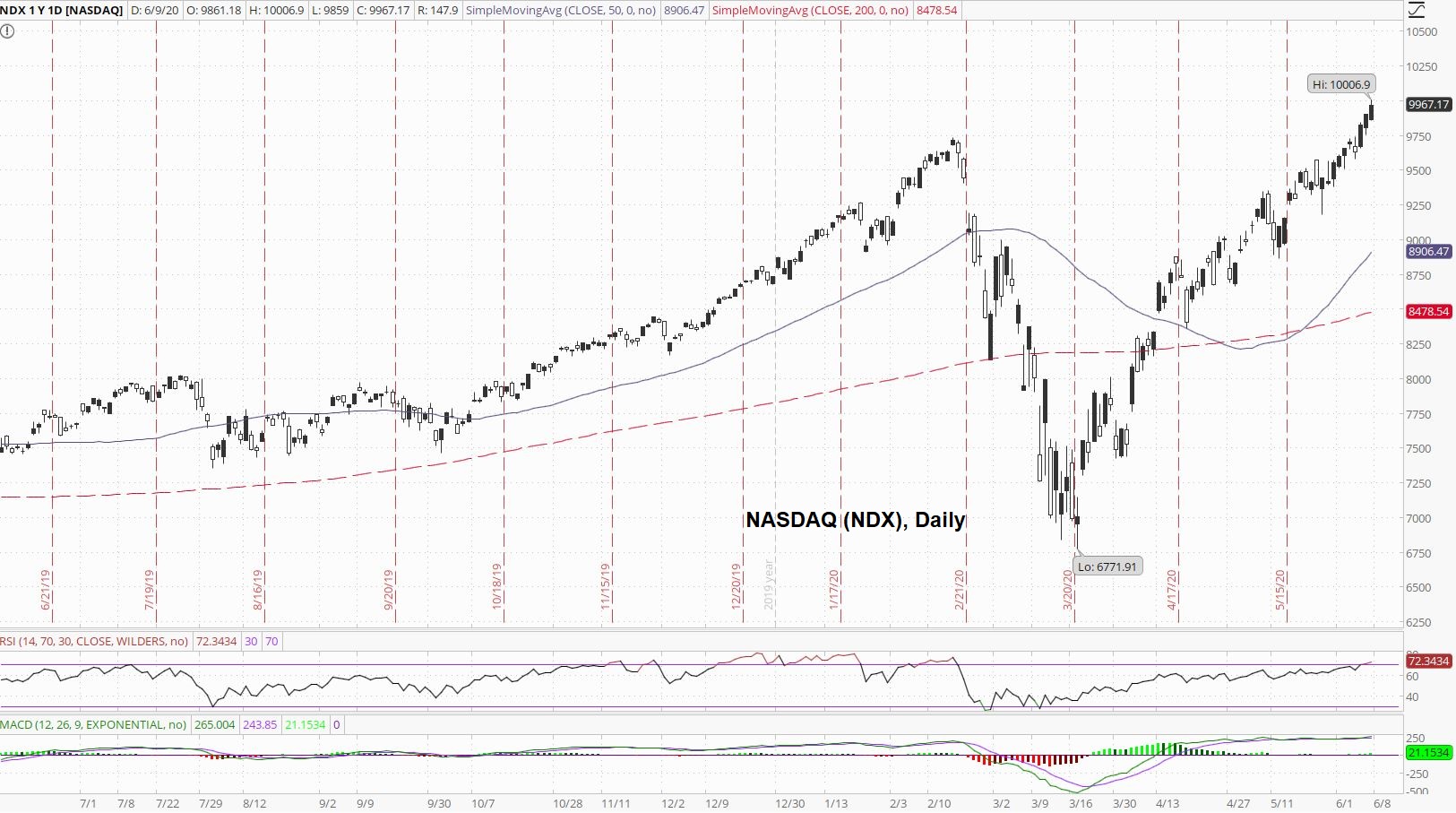 Curiously, many analysts are placing the stock market euphoria on the sudden emergence of retail "day traders" while ignoring the Elephant in the Room - the Fed's direct market interventions since late March.

Fear has been steadily leaving the stock market: 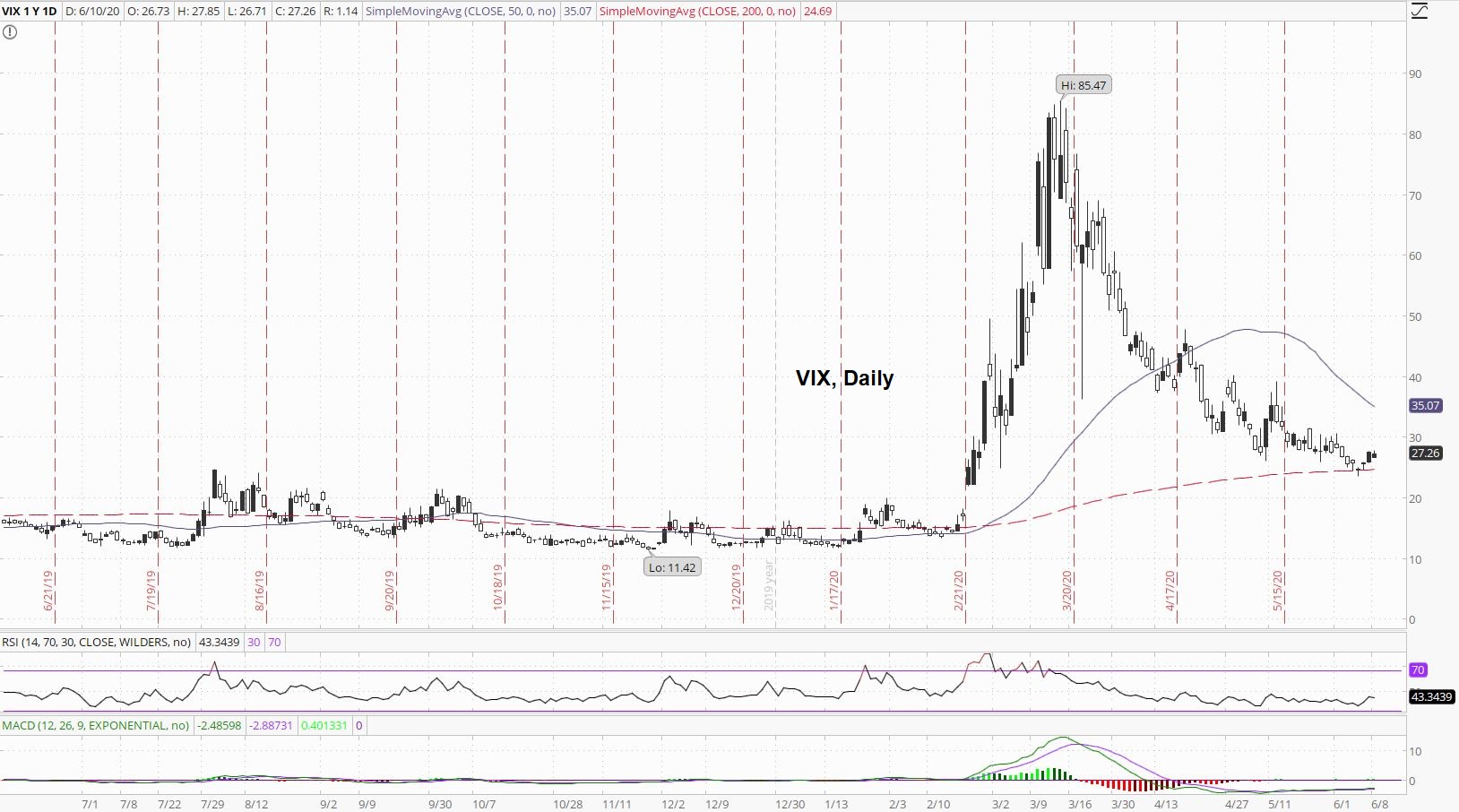 The bounce is noteworthy, as are the tight ranges.

Yield on the 10-Year Note has spiked along with the stock market: 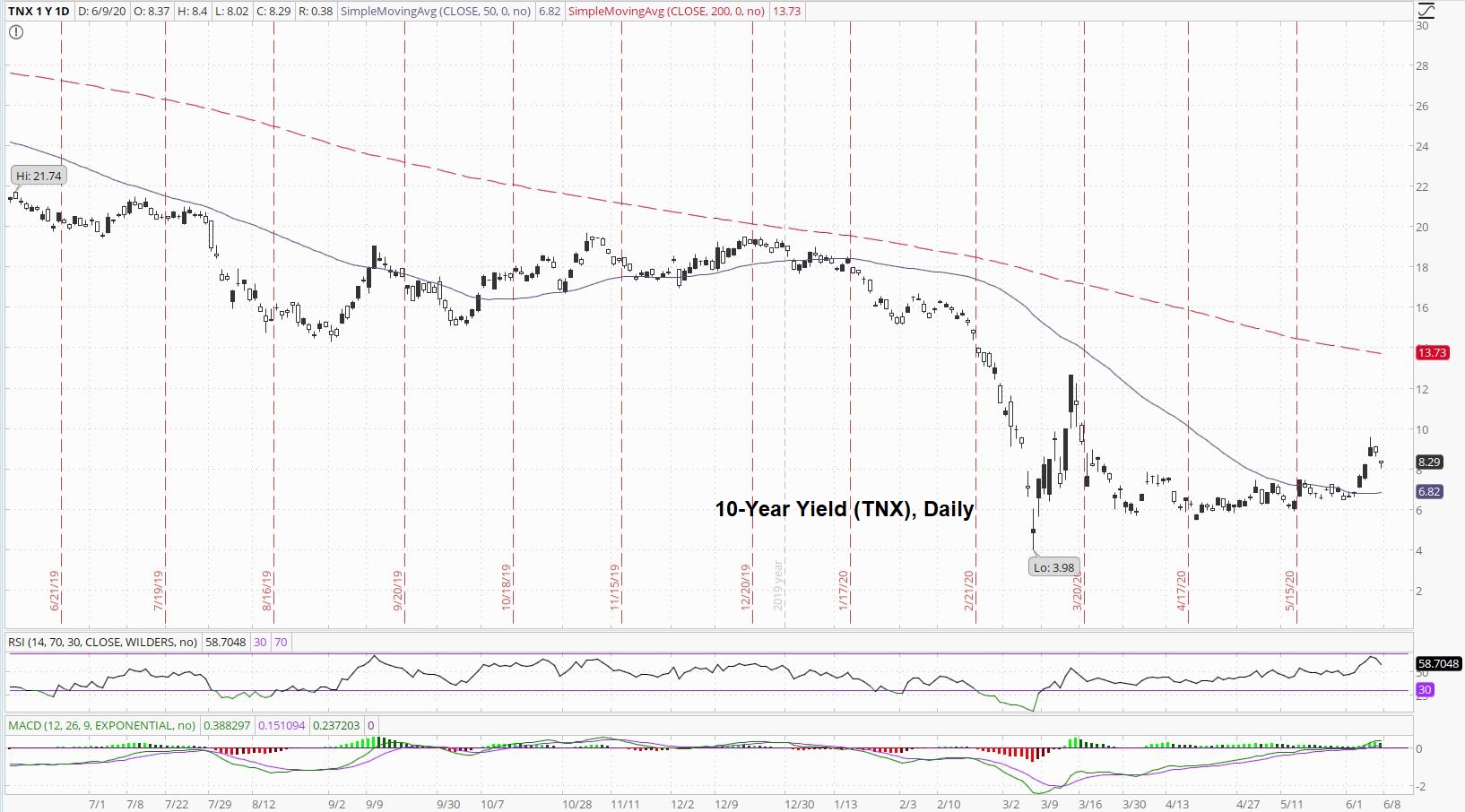 The US Dollar Index looks to be falling for the eleventh out of twelve days: 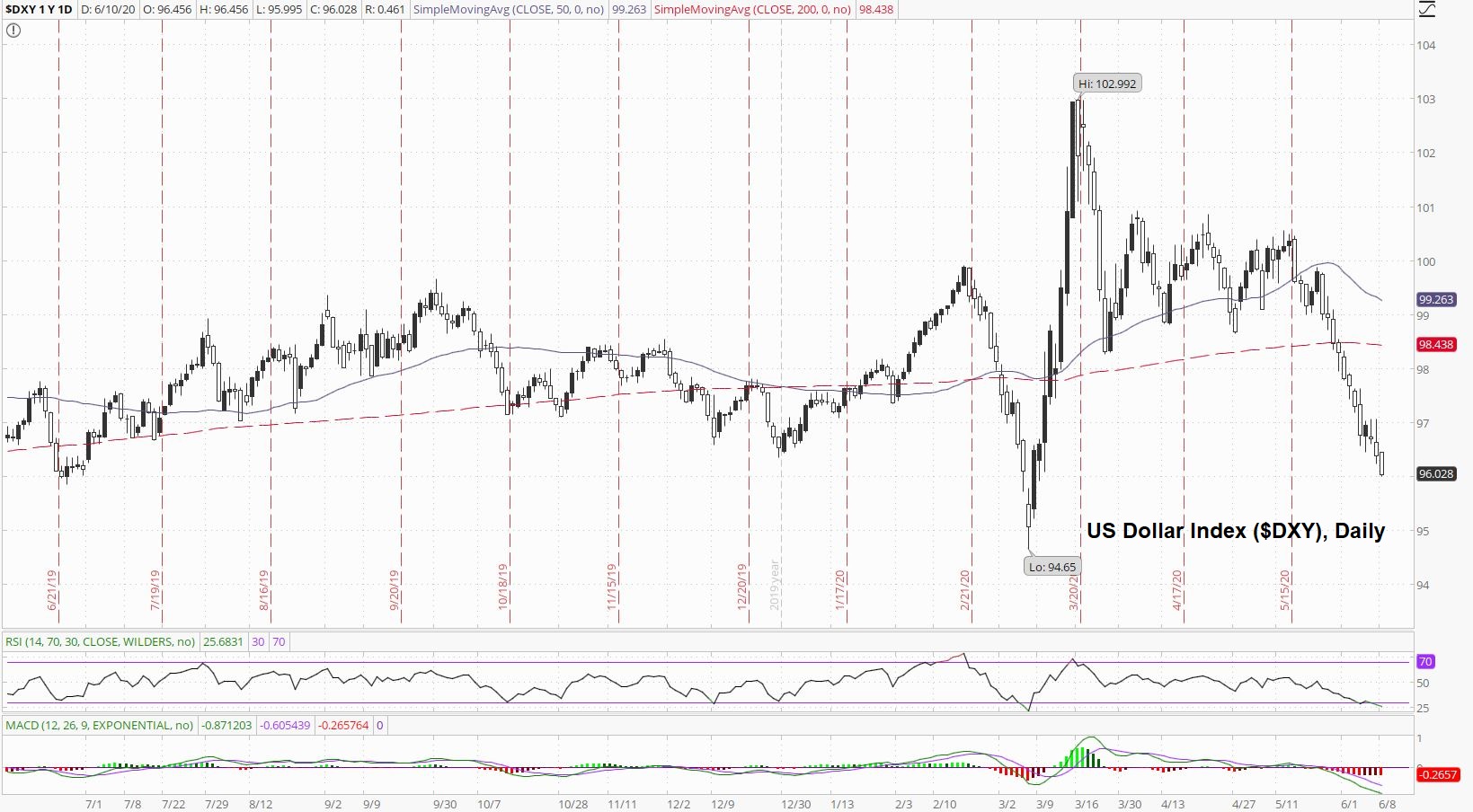 If the index breaks-down to lower lows, it will be hard to argue against a roll-over in the dollar when plotted from late-September, early-October, and if that is the case, even if inflation is tepid for some goods, a more meaningful decline in the value of the dollar could equate to less purchasing power on net.