Silver AS AN INVESTMENT Fundamentals

Used in more physical transactions all time than any other currency. Silver is historically cheap compared to gold and other financial assets. Precious and limited in supply, silver is a required industrial precious metal for our modern lifestyles. Come learn why this is so.

For many thousands of years, silver has served as a trustworthy store of value, specie money for day to day transactions, and as a vehicle for long term savings.

Silver is the most common and least expensive of the various precious metals (compared to gold bullion, platinum bullion, and palladium bullion). Often referred to as the poor man’s gold, silver got first minted in Lydian coinage around 600 B.C.

“The major monetary metal in history is silver, not gold,” that was according to Nobel Prize-winning economist Milton Friedman in 1993. He was most likely referring to the fact that based on an overall historic human to human transaction volumes, silver coins have served humanity more as money than any other past commodity money or fiat currency issued today.

Since the beginning of this 21st Century, the world has witnessed a pronounced general increase in silver’s value-priced in every single national currency issued by any government worldwide. Compared to gold, silver’s price performance vs. fiat currencies tends to be more volatile to both the downside and upside. 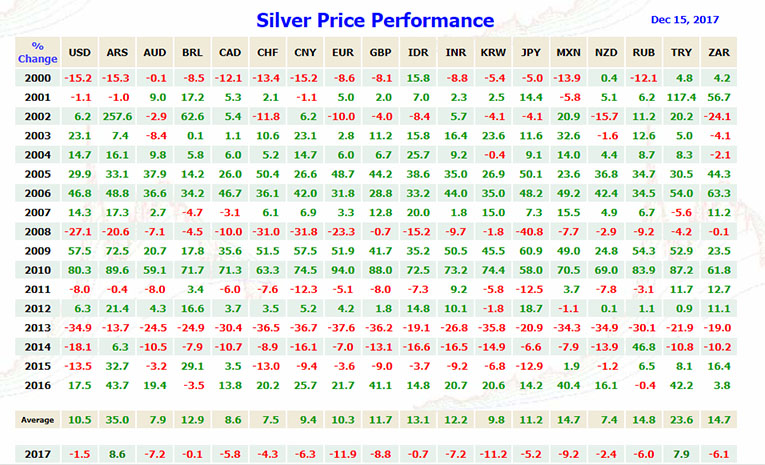 More so than merely a monetary metal, silver today is a heavily used industrial metal.

Silver remains 2nd only to crude oil in the amounts of real-world products and applications for this shiny precious commodity.

Why is silver so valuable?

By its inherent nature, the element silver:

For now, here is a look at silver supply and demand data over the past decade: 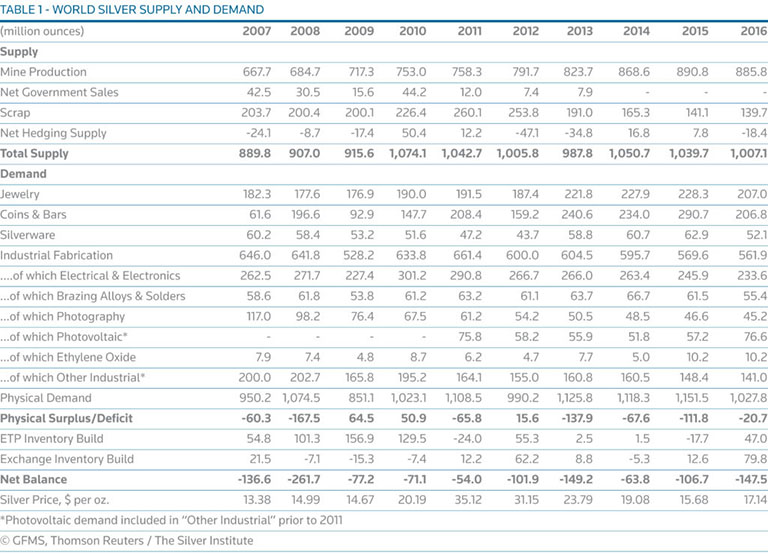 Based on the fact that silver is found in the ground at a rate of about 8 parts silver to 1 part gold, it is conservative in estimating we humans have mined approximately 1.5 million tonnes of silver throughout history (or just over 48 billion troy ounces). 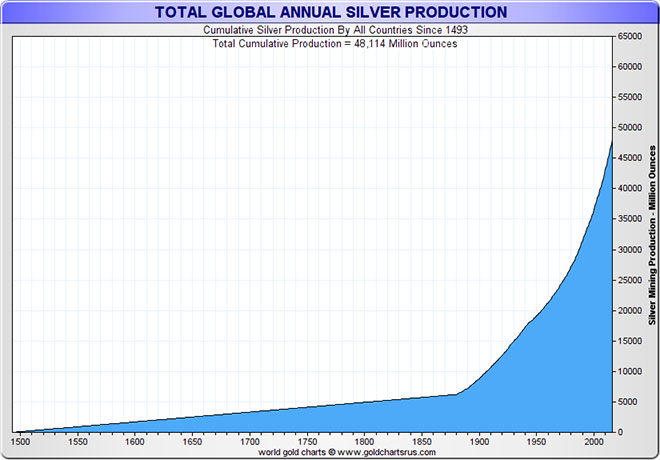 All Silver Ever Mined

All-time gold mining output is almost all entirely with us today (187,200 tonnes), yet conversely, much of the near 50 billion silver ounces ever mined are not.

A good portion of the silver ever mined is now in landfills or slim unrecoverable amounts in industrial applications, artwork, and jewelry.

Annually less than 20% of silver supplies come from recycling programs.

Where is Silver Mined? 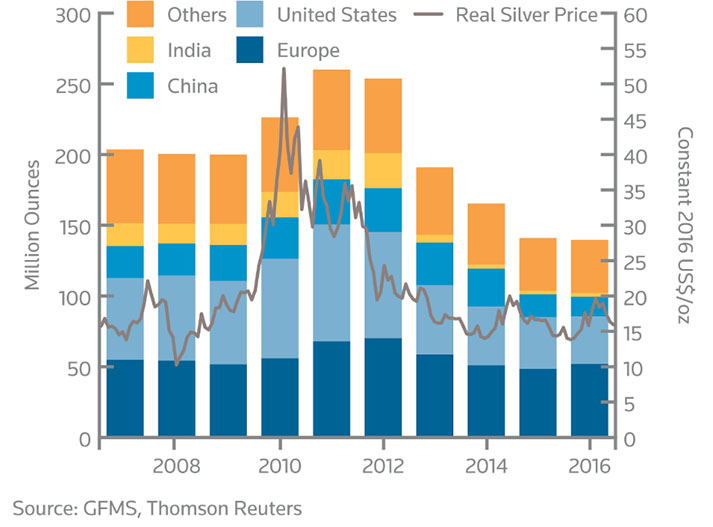 It could get argued that actual annual addition to the above-ground silver supply is only around 800 million ounces per year. Silver mining operations yield about 80% of the yearly amount while again, silver scrap recycling yields about 20% of annual silver supplies.

Most silver (about 70% of it) gets mined as a byproduct of other industrial and precious metal mining efforts. Only a tiny amount of silver comes from ‘silver-only’ mining efforts. The reason for this has much to do with the difficulty in profitably executing silver mining only efforts. 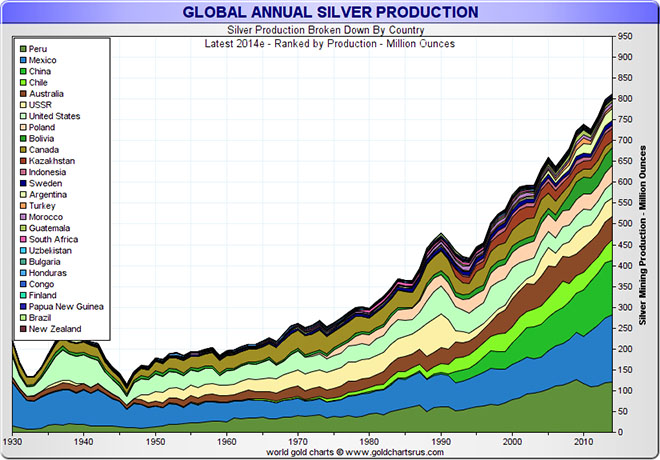 Respectively speaking, the nation-states of Mexico, Peru, and China produce the most significant silver mine outputs in the world today. In total, they bring over 1/2 of the world’s annual silver mine supply to the market.

According to Thomson Reuters, world silver demand has outstripped annual silver supply levels 7 out of the last 10-years running.

Hence conservatively about 6 to 7% of the all-time silver ever mined remains owned in .999 fine bullion coins, rounds, or bullion bars form above ground today. Much of this silver will not get converted into industrial silver supplies without much higher spot prices. 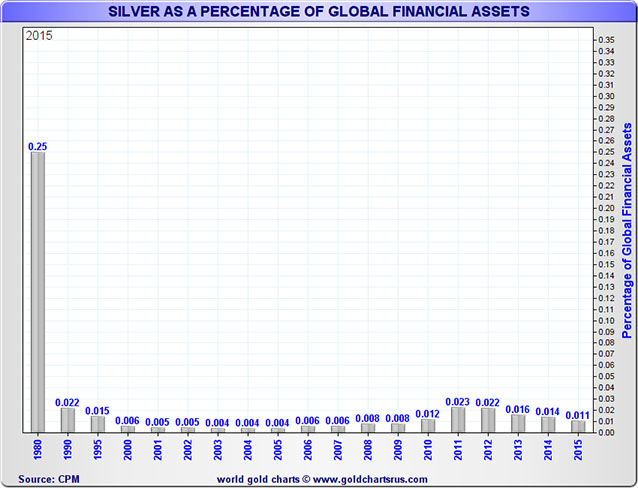 Silver as a Percentage of Global Financial Assets is Extremely Tiny

Mathematically worldwide silver bullion holdings account for about 1 / 6000th of all the world’s wealth in today’s valuations.

Unlike world government’s Official Gold Reserves which hold over 1/6th of all the gold ever mined under direct government ownership, government silver reserves are a tiny portion of the current silver supply.

How much silver bullion in the world?

Expert estimates of government silver supplies total 89.1 million oz or about 2.5% of the 3.5 billion troy ounces of silver bullion likely above ground in .999 investment-grade form. 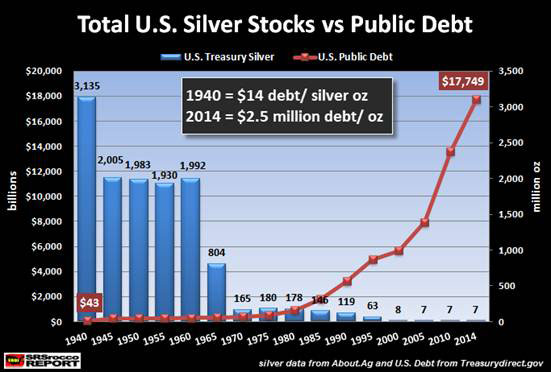 By 1964, the US government, for the most part, ended using silver in much of its circulating coinage due to years of deficit spending and lessening silver bullion reserves.

Other foreign governments such as Britain, Canada, Australia, Mexico, as well as the United States, all moved away from striking and circulating silver coinage for essentially the same reasons.

For the past 10-years, annual worldwide physical silver demand has averaged 1,042,100,000 troy ounces per year according to the Silver Institute World Silver Survey.

About 1/4th of annual silver demand is used in silver jewelry and for the production of silver eating utensils. Silverware has long gotten utilized in cutlery due to its brilliant luster, anti-germicidal properties, and easily malleable characteristics, making it conducive for silver artisan’s designs and production.

Like crude oil, without silver, our modern way of life would be impossible to maintain.

The amount of industrial applications for silver is surpassed only by crude oil itself. Silver has thousands of modern-day industrial uses in which replacement with other less precious metals is unlikely given silver’s current price point and its superior elemental attributes compared to possible base metal replacements (e.g., copper).

What is silver used in today?

Industrial silver uses include the following real-world applications within:

Industrial demand for silver in many cases may also be inelastic to higher price spikes due to the tiny trace amounts of silver utilized in many of the aforementioned industrial applications.

Thus even if silver were to get priced many multiples higher than it is today, silver usage in smartphones or other electronics, for example, will most likely continue.

How much silver is in a computer?

A personal computer desktop generally contains about 1 gram of thinly placed silver coatings, some of which I am typing upon as I write this document.

How much silver is in a cellular phone?

A cell phone typically uses just 0.37 grams of silver (priced about 20¢ USD at $17 USD oz silver). Companies like Apple actively seek to recycle their expiring product lines to retrieve precious metals like silver before being lost to landfills.

Recycling programs aside, future additional costs per unit due to higher silver prices will likely be passed onto consumers rather than being replaced with inferior base metals. 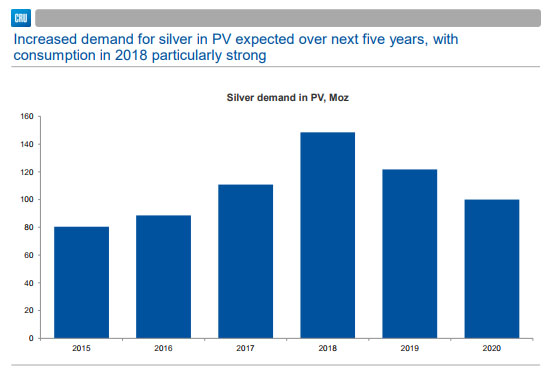 One of the fastest-growing uses of silver is found in the solar panel industry (PV systems). It gets estimated that silver solar demand could eclipse 140 million ounces in 2018 alone, much in large part to growing demands for solar energy in both China and India respectively.

How much silver is in a solar panel?

The average solar panel uses about 2/3rds of a troy ounce of silver (or about 20 grams).

Silver’s unique elemental attributes guarantee that industrial silver applications shall remain robust and grow as the developing world continues to demand a more modern way of life ahead.

In 2016 alone, investor’s .999 fine silver bullion bar and silver bullion coin buying accounted for just over 1/5th or 23.3% of the year’s new silver mine supply.

This silver bullion buying segment of silver demand growth has exploded over the last decade much in part due to the 2008 financial crisis, where the median middle-class US citizen lost over 40% of their wealth on paper. 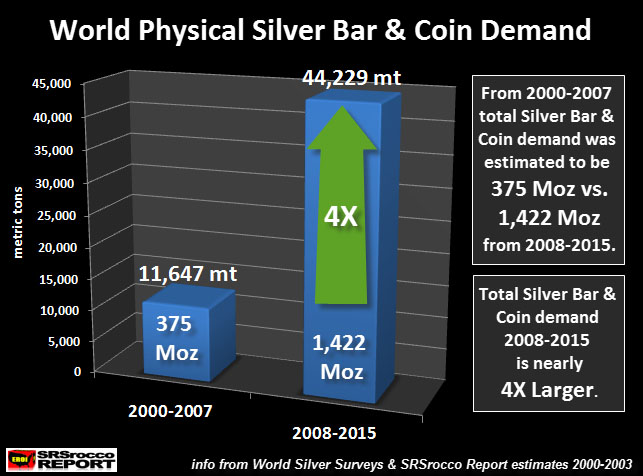 Starting the 21st Century, silver’s price was slightly over $5 USD oz and had risen to nearly $50 USD oz in the spring of 2011. Currently, most popular silver bullion products as well as virtual derivative proxies (futures contracts, ETPs, ETFs, etc.) trade at prices below $20 USD oz.

The following chart encapsulates silver’s US dollar price throughout the fully floating fiat currency standard beginning with the end of the Bretton Woods agreement on August 15, 1971. 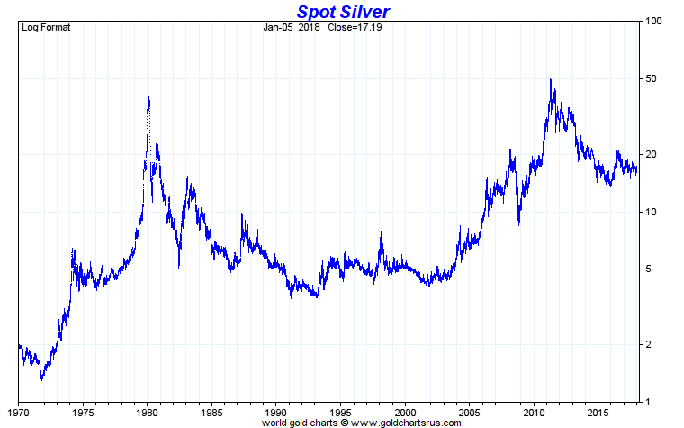 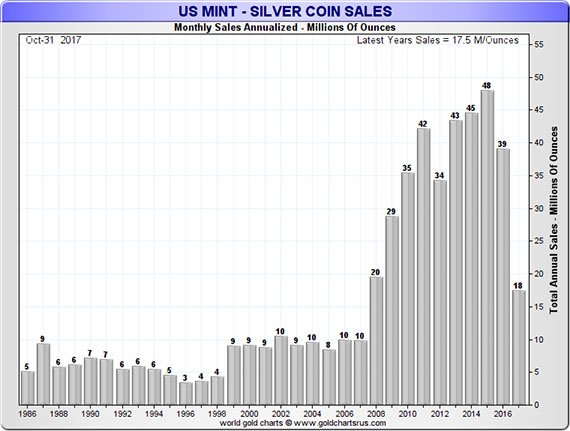 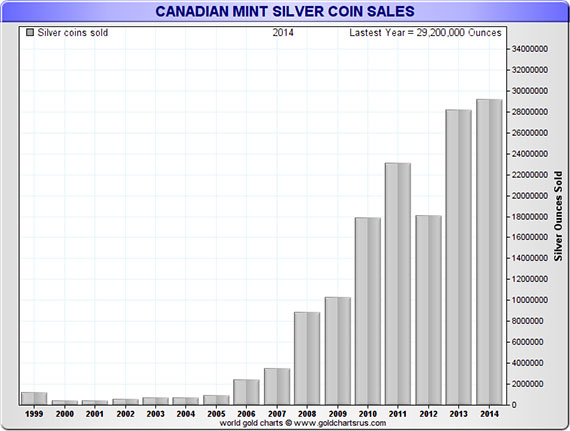 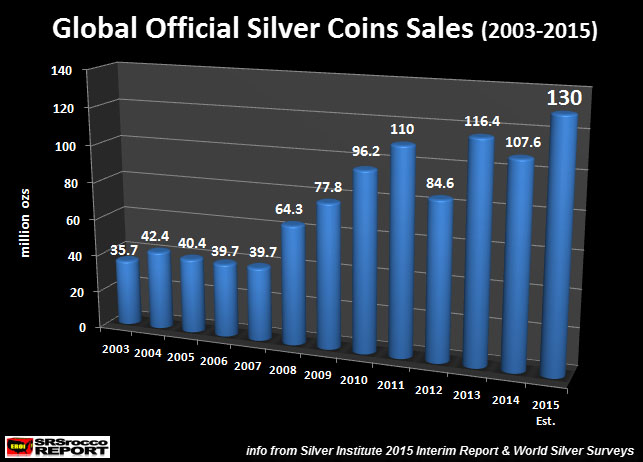 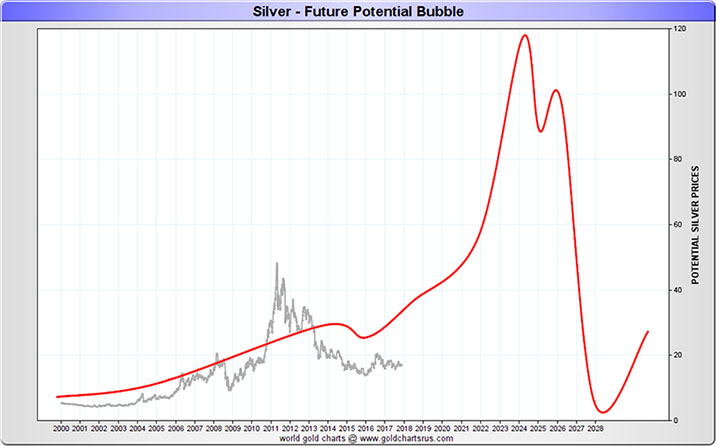 Commodities like silver (as well as crude oil, palladium, platinum, gold, wheat, coffee, cotton, and others) have forwards or futures contracts trading on various futures exchanges throughout the world to ascertain their real-world prices.

Formal futures contract markets date as far back as The Code of Hammurabi. The original intention of multi-millennial old futures contract usage was to give the producers of commodities (e.g., silver miners), end-users (e.g. silver refiners or silver bullion dealers), and commodity price speculators (those who simply trade on futures exchanges for short term gains) ways or means to respectively manage their price risk, buy and potentially take actual delivery of the real-world goods, or simply to make bets on a commodity’s price movement up or down in the near future.

Silver Spot Price – (n) the current notional price of 1 troy ounce of silver available for immediate delivery before being minted into a bullion product (e.g., bar, round, or coin).

As ass-backward as it may sound, the price of silver today (not the long term historical silver price) is mostly almost all found via the selling and buying of virtual contracts representing the underlying potentially deliverable physical precious metal fractionally reserved. 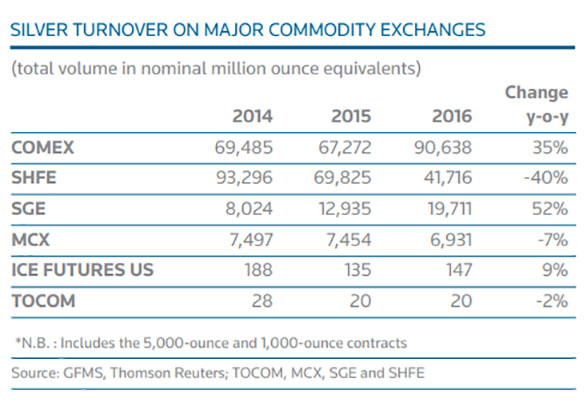 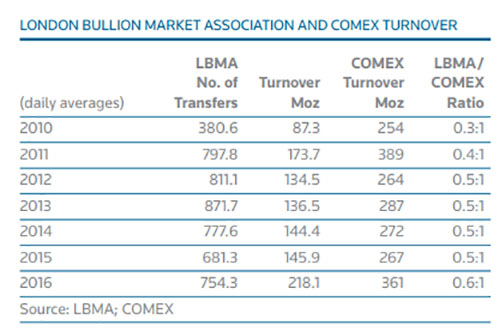 In 2016, the COMEX alone traded over 90.6 billion ounces of representative silver contracts (the vast majority of which get settled in US dollars).

The LBMA averaged over 218 million theoretical silver ounces traded each day in 2016 alone (that is approximately 55 billion ounces of representative silver sold in 2016).

In 2014, Bloomberg estimated the silver derivative market totaled $5 USD trillion in notional value. With only about 3 billion ounces in above-ground silver bullion supplies and an average price of about $20 USD oz in 2014, the derivatives market used estimated leverage of about 83 oz of silver derivatives vs. 1 oz of investment-grade bullion in existence.

The positive news for physical silver bullion buyers is that future price discovery for silver appears to be moving back towards physical reality as the trend of more and more investors demanding physical investment-grade silver bullion products over derivative proxies continues onwards. 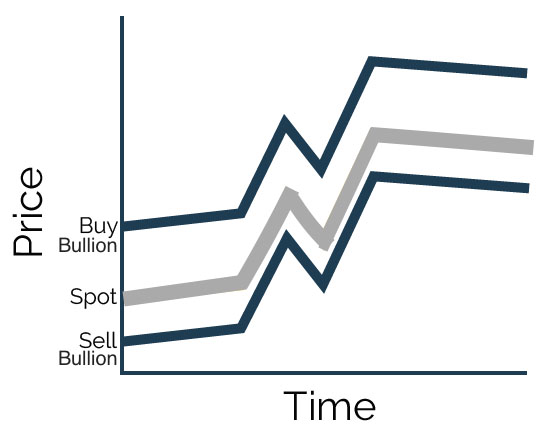 When outsized silver bullion market demand hits (like it did during the 2008 Financial Crisis), silver bullion prices for products available for immediate delivery tend to climb exorbitantly higher (often both on the sell and buy-side) to levels at a time both hovering above the world’s fluctuating silver spot prices.

For example, see how the world’s most popular silver bullion coin was priced as high as +80% over the fluctuating gold spot price in the fall of 2008 on the far left side of the following chart. 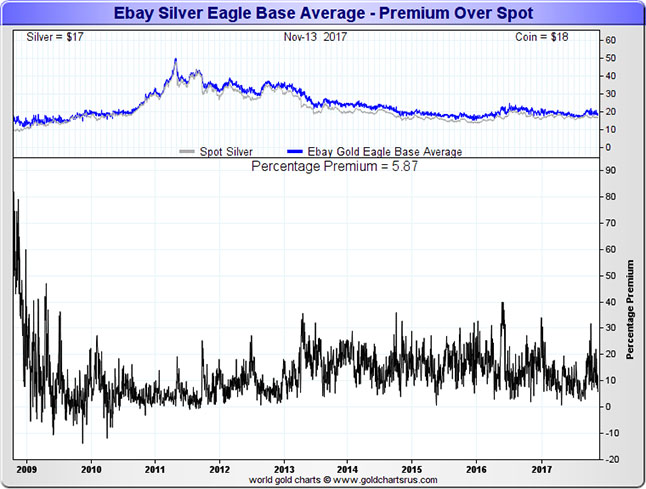 1 oz American Silver Eagle Coins were trading about 80% above the silver spot price in 2008.

- Refiners of silver smelt and purify the silver ore or scrap into .999 fine bullion or grain then sell these products to governments, mints, or silver bullion dealers at or just above silver’s spot price.

- Both government mints and private mints strike silver bullion coins or manufacture silver bullion bars and rounds, selling them to silver dealers or the public at large at prices typically above the silver spot price.

When one learns how highly leveraged fractionally reserved futures markets currently operate and derive the various fluctuating silver spot prices, they often choose to bypass electronic silver derivatives and elect to buy and take physical delivery of their silver bullion.

In 2 minutes, you can hear a highly successful hedge fund manager explain why the trust he serves as fiduciary chose to acquire physical bullion over virtual derivatives or futures contracts. According to him and perhaps informed common sense, price does not solve everything.

The last ten years of silver industry data prove that more individual investors across the world want to buy and hold silver bullion directly, own it first hand entirely unencumbered to help ensure the fact that they indeed own it moving forward.