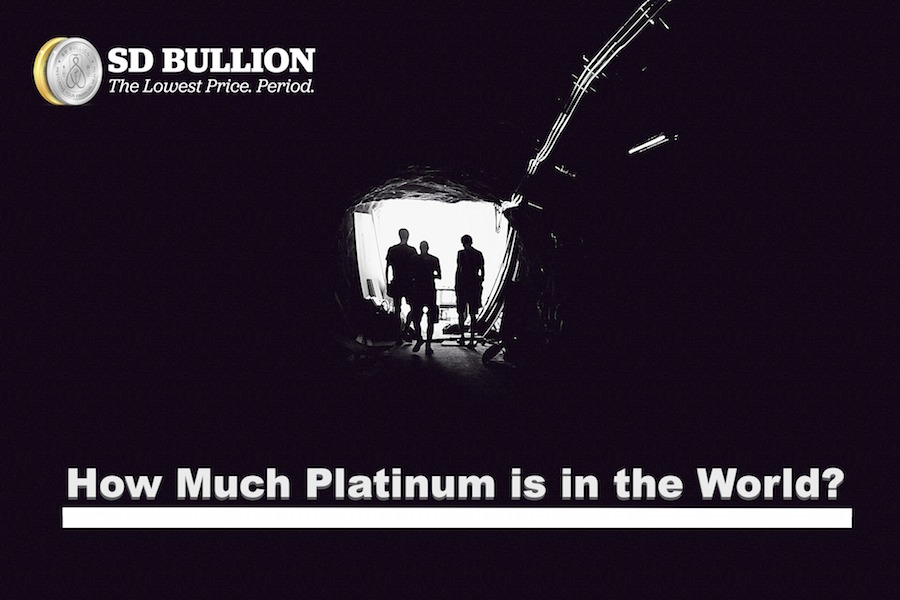 There has been a long-running claim that the total amount of physical platinum the world has ever mined would fit in an average living room or garage.

Other than merely knowing the rough amount of platinum ever mined, most of which has got put to commercial use. For bullion buying readers, we will try here to estimate how much .999 fine platinum is available above ground today.

Using CPM Group’s 1977 to 2017 platinum mine supply data. We find just under 190 million oz of platinum or nearly 6,000 tonnes of platinum have gotten supposedly pulled from the Earth’s crust over this 4-decade timespan.

This claim gets corroborated by the US Geological Survey whereby a slight majority of all the platinum group metal mining supplies from 1900 to 2011 where palladium, with a small minority of platinum (i.e., theirs is a 14,200 metric tonne claim through 2011, again about 40% of that being platinum).

Data crunchers and precious metals infographic makers, Visual Capitalist, published in 2013 that a total of 9,400 tonnes of platinum had been mined up to that date. Since then we will round number this figure to 10,000 metric tonnes or just over 321 million ounces for those keeping track.

Oh, and by the way, they even gave us a visual of the aforementioned all-time platinum mined cube claim which back in 2013 was about 7.2 meters long, comprehensive, and tall. Today that would be about 7.7 meters on all sides. 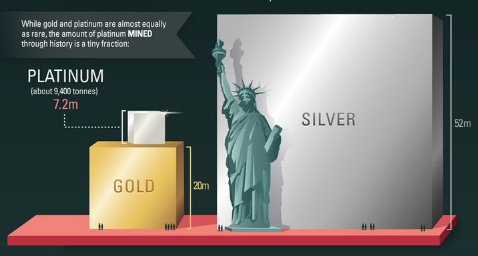 Ok, so an average 2-car garage in the USA with perhaps a high almost second level with extra storage space might top out at 7 meters, by 7 meters. This suburbia example is stretching it, of course, most average US garages aren’t this large.

But having said all this.

Surely, all the platinum supply fitting into a garage or living room claims must apply to current above-ground .999 fine platinum bullion supplies?

Remember only a small portion of all time mined platinum has gotten used in fabrication demand to date.

We’ll test that theory too by the end of this post.

For now, let us dig further into the hard data details on platinum supplies over time.

This, "How much platinum is in the world content?" will be chart and data point presentation heavy. In doing so, we’ll be able to better ascertain a conservative estimate for total physical platinum supplies in the world today — a complete world platinum estimate ground in facts.

Defining: How Much Platinum is there in the World?

Most platinum ever mined is currently in use in some form or fashion.

About 17% of all annual platinum demand get met with recycled secondary platinum supplies coming back into the market.

The rest of annual platinum supplies mostly comes from new platinum dug out of mines. Most of which comes from South Africa (about 70% of new line platinum mine supply) and then The Russian Federation (see the green chunks in the chart below). 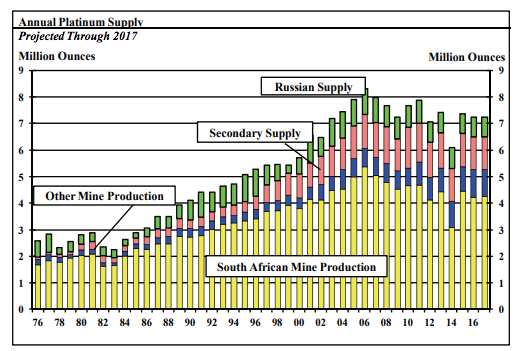 In the following platinum supply vs. demand chart, you can likely see how the annual platinum supply has kept a steady pace with ongoing platinum demand fabrications. Again, we reiterate most platinum that has ever gotten mined has got put to some use or application.

This factor likely means there is much less .999 fine platinum supply available today than has ever been mined and put to use throughout history. 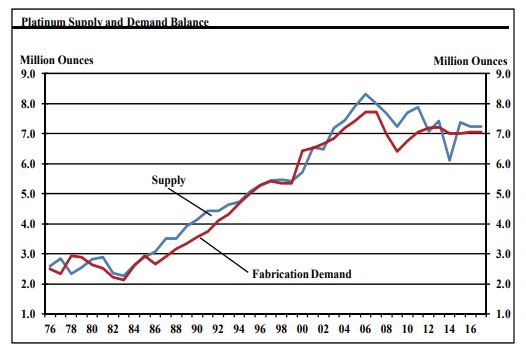 Next, we divide up platinum’s demand segments in the magnitude of their size.

We start first and foremost with its highest demand uses within various industries: pollution control in automobiles, jewelry, investments, petrochemicals, electronics, dental, and other uses. 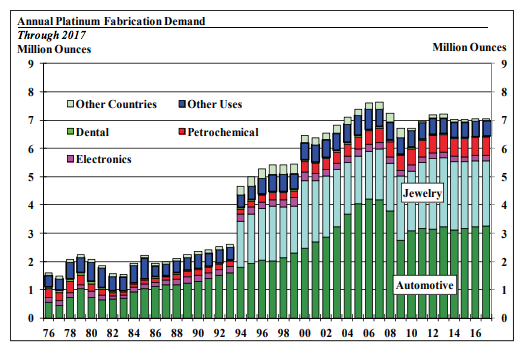 So how Much Platinum is in the World?

These estimations most likely combine the highest demand sectors of platinum applications (e.g., anti-auto pollution catalytic converters) and platinum jewelry into the fray. 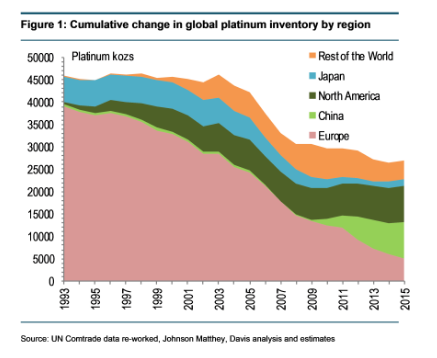 Trouble is again, a vast majority of this estimate likely commingles platinum jewelry demand and other platinum application amounts into this total platinum supply figure ending in 2015.

How much has platinum jewelry demand over time bifurcated total physical platinum supplies?

Japan and China are the respective platinum jewelry gorillas of the world. 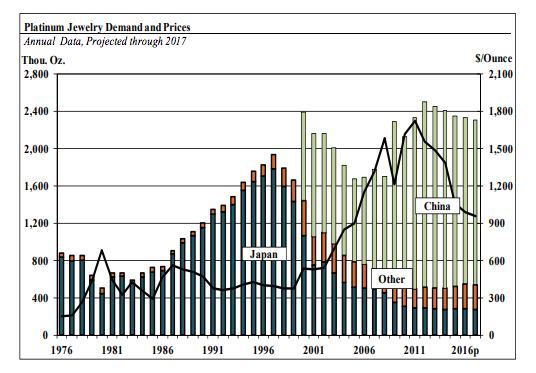 All in, this chart represents about 64 million oz of platinum jewelry buying over 4-decade’s time.

Using Dr. David Davis’ chart posted above. We can be somewhat confident a lot of the Japanese platinum jewelry has likely been sold off as secondary recycled supply by now.

All of this data, though is too wide a broad range of above-ground platinum supplies for us to end here.

Let us dive further into available data on how much .999 fine platinum exists in above-ground supplies.

We want to drive down to the big question, which remains for bullion buyers who might wonder.

How Much Platinum Bullion is in the World?

Let us examine a few of the most easily identifiable .999 fine platinum supply stocks to confirm some percentage of these claims.

We start with Platinum ETF bullion holdings at the moment. There are 2.709 million ounces there.

We can next look at how many .999 platinum coins have been struck and sold over many decades, and we will conservatively assume not one ounce has been recycled to date (highly unlikely).

There has been approximately 3.7 million oz of platinum coins minted and struck since 1983. 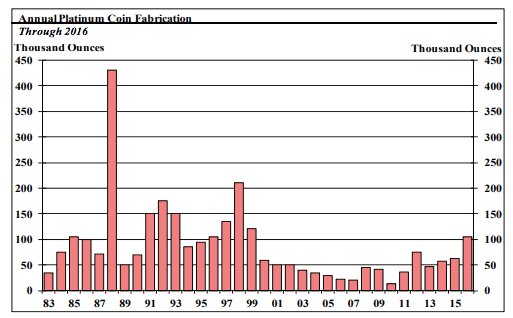 Then there is also a tiny, almost minuscule pile of about 170,000 oz of platinum bullion, sitting in ironically the most critical determinant of platinum spot prices day to day via the NYMEX platinum price discovery mechanism. 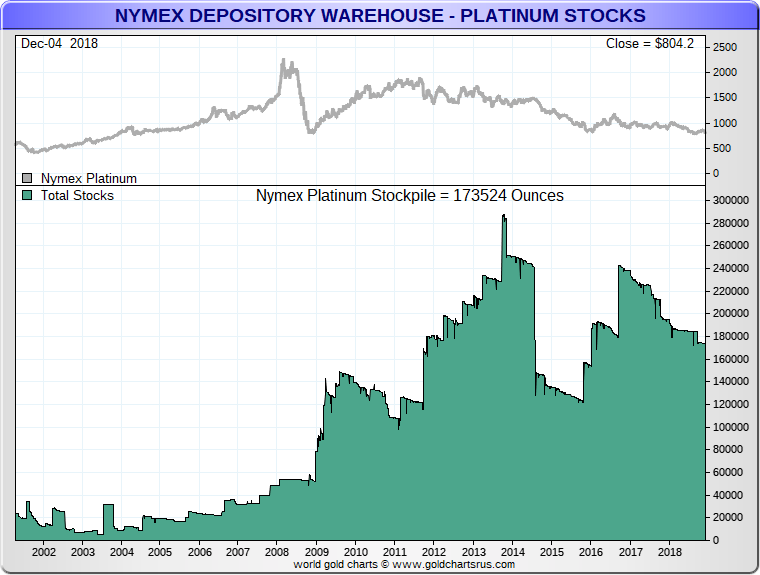 Additionally, another 43,000 oz or so of platinum sits in Japanese TOCOM platinum warehouses.

Shanghai Gold Corporation also trades platinum contracts, but data on their physical stockpiles is minuscule compared to platinum ETF stockpiles at the moment.

All total, we are conservatively estimating there are about 8 million ounces of .999 fine platinum above ground.

We are talking about a huge swath of platinum bullion not available at prices today. Much of which was likely ‘discovered’ and refined into bullion at much higher than the current $930 USD oz price it ranges around today, as of updating this post.

So again, we reiterate our conservative estimate for the following topic of this platinum bullion-related blog post.

And sure, $6.4 billion in US dollars may sound like a lot of money to an individual not a part of the published global billionaire order.

But this estimate is minimal when considering the amount of multi-hundred trillions of USD values sloshing around the globe at the moment.

Consider the total global debt pile alone is near a mind-numbing $250 trillion mark, a large chunk of which is earning negative interest rates.

So in fact, this $6.4 billion .999 fine platinum supply estimation is so small, all but one of the world’s largest multi-billionaires could make a play at cornering the .999 platinum market.

Again we base that claim on the platinum’s paltry price and tiny fine bullion supply points respectively at the moment.

Indeed at the moment of publishing this report, platinum has perhaps not been this cheap to gold in over a century. Yea you read that right, around 100 years in time.

How cheap is Platinum right now?https://t.co/U9aRWYnaEA

So let us bear down with the final question at hand.

Could roughly 8 million ounces of .999 fine platinum fit into a garage or living room?

So 8 million troy ounces of platinum bullion is 248.83 metric tonnes of platinum. We divide that by this densest precious metal's 21.45 platinum density. And we finally take the cube root to get this theoretical platinum cube’s estimated size.

Hence this estimated 8 million ounces of .999 platinum bullion in a cube, would be the size of 2.26 meters per side or 7.43 feet per side.

Thus all this estimated 8 million oz of platinum bullion in the world would easily fit into either yours or our average Joe garages.

Even if you are a middle-class New York City or Hong Kong resident reading this article from an overpriced tiny box-like compartment (ah, we sarcastically meant apartment).

The entire world’s physical platinum bullion supply could likely all fit into your humble abode too.

As for any potential published or unpublished Forbes billionaires reading this, depending on the amount of fiat currency notes you may have amassed in you or your forefather's lifetimes. You too could likely fit all the world’s platinum bullion in one of your walk-in closets! Good luck with converting your paper wealth into something tangible before this overvalued US equity market starts leaking swaths of value.

Forget hypotheticals though, only a few billionaires' fiat US dollar notes could go out and potentially corner this small platinum bullion supply available today. Especially at these historically low platinum price valuations.