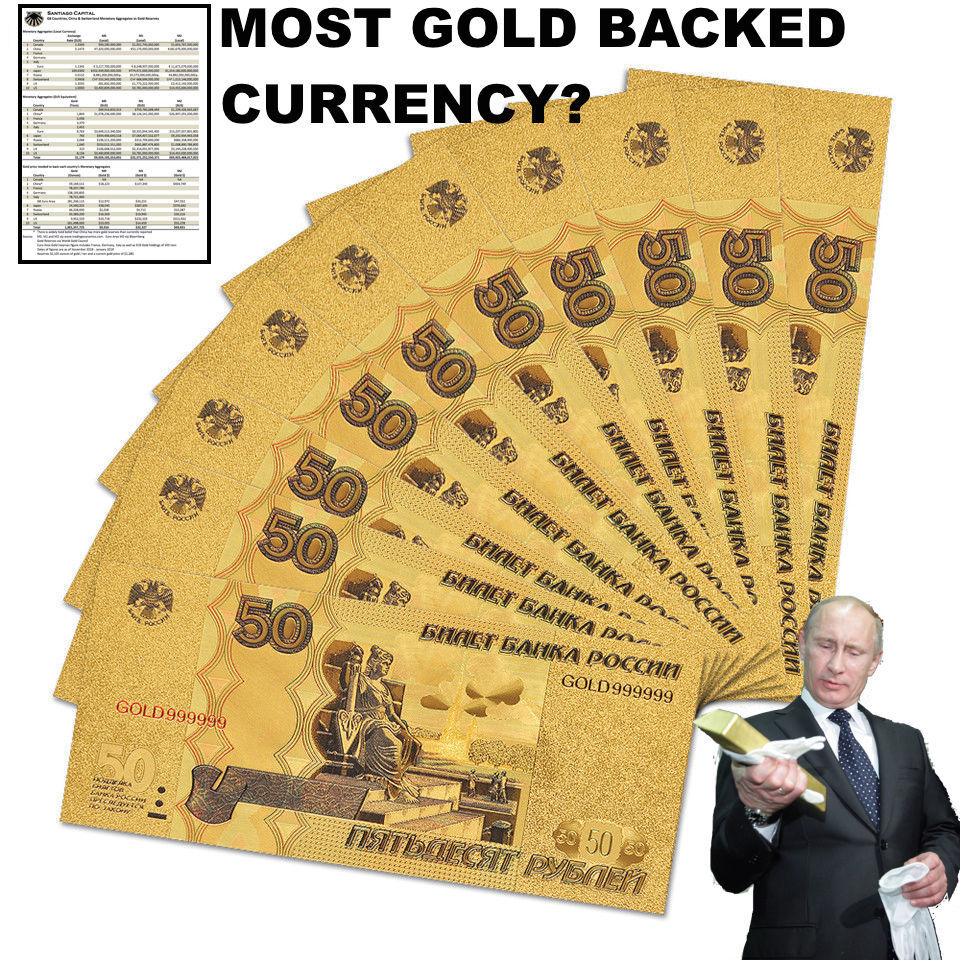 When it comes to reserve currency status and monetary history, the trend has often been that those who have the gold make the rules (one could argue silver has had a hand in this axiom as well).

We know the east buys physical gold bullion like crazy (about 1 of every 5 ounces of all gold above ground resides in Chindia).

But what about government gold reserves?

Study gold data and you will learn about the same amount, 1 in 5 ounces, is likely also comingled among government gold hoards.

Have a look at this latest update trying to understand, amongst which fiat currency, currently has the largest Official Gold Reserve 'backing'.

Westerners might be surprised to learn that the Russian Ruble has the largest pile of Official gold to fiat currency cash in their financial system.

Let us break down the numbers, so you can see at what US dollar gold price per troy ounce it would take to back various fiat currencies today.

Kudos to Brent Johnson of @SantiagoCapital in fulfilling our request to update this following "Gold backing" currency aggregate data. 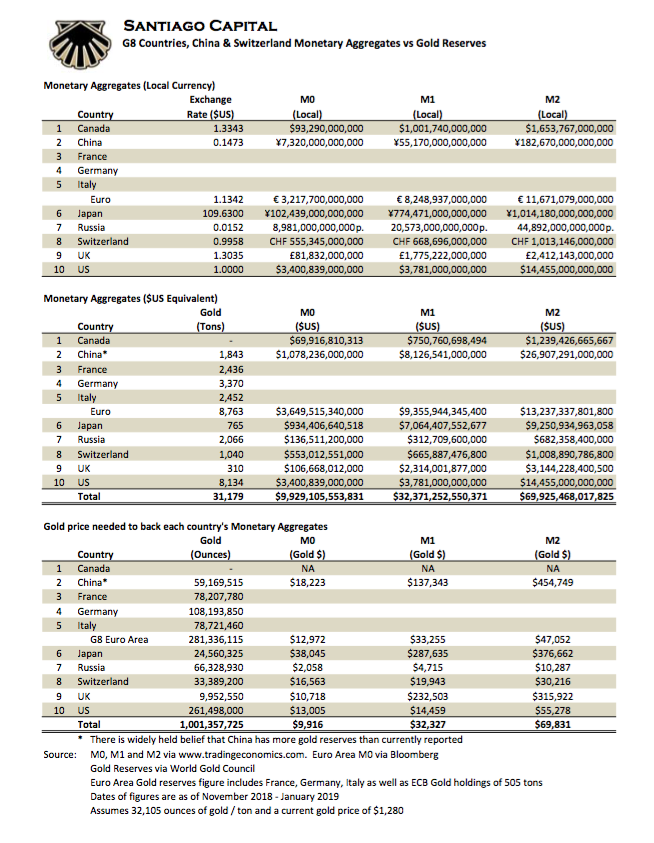 Of course, this G8 Monetary Base vs Official Gold Reserve data is based on various inputs.

The most questionable of which are the Official Gold Reserves of various parties on this list (e.g. USA and its unaudited gold in Fort Knox).

According to the data, it would only take a US dollar price of gold to clear $2,058.00 for the Russian Federation to have all its M0 narrow money supply fully backed.

Backed by what gold you ask?

By it's well and recently documented building stockpile of Russian gold bullion making the majority of the physical Russian ruble notes outstanding backed by her gold bullion reserves.

We could even make a the case that the major change in Russia's gold bullion stacking occured partially as a direct result of the work of GATA (Gold Anit-Trust Action Committee).

Take a trip back in time with us to understand why we believe this to be indeed so.

We all know China has been under declaring her Official Chinese Gold Reserves for years.

Anyone who tracks physical gold flows knows the government in China very well might have over 20,000 tonnes of gold by now in her coffers.

It is not really a question if massive flows of physical gold have been China bound, especially ever since the 2008 Global Financial Crisis.

The real question to ask.. is specically WHY this has been so, for so long now.

And perhaps as to WHEN the world will eventually learns how much, most likely to further Chinese interests at the time of decleration.

Meanwhile our MAGA and Chief was telling us as a candidate the ugly truth which many fear has been only worsening since he won the Office of the President of these United States of America.

It's looking more and more like the fiat US dollar vs Gold price will have another major war in the decade to come.

Sure the US dollar has won many a battle along the way, it did so during the last failed London Gold Pool as well.

Guess which of all these monetary units will win the major war up and coming?

Our own history and US Constitution tells us this lesson rather explicitly.

From fiat currency not being worth a Continental, to Greenback and Confederacy currency backfirings.

To confiscating private gold and quickly devaluing the fiat currency given in exchange to US citizens for said gold in 1933-1934. Then losing much of this nationalized gold in an ultimately failed attempt to keep its fiat price in check.

To the 1980 platinum-palldium-gold-silver price peaks. A time in which we could have gone back on a 1980 gold standard, based on the then US dollar gold price vs its then M0 M1 monetary aggregates.

Today, given just this data alone, we are now looking at a 5-figure gold price 'knockout blow' in fiat Federal Reserve note terms.

A crisis in currency confidence is likely all that would be required to see this occur. It happened in 1980, it almost began in 2011, it can happen again.

There are many who believe this rhyme of history is up and coming. You can bet Russia would be one of them, perhaps China too.