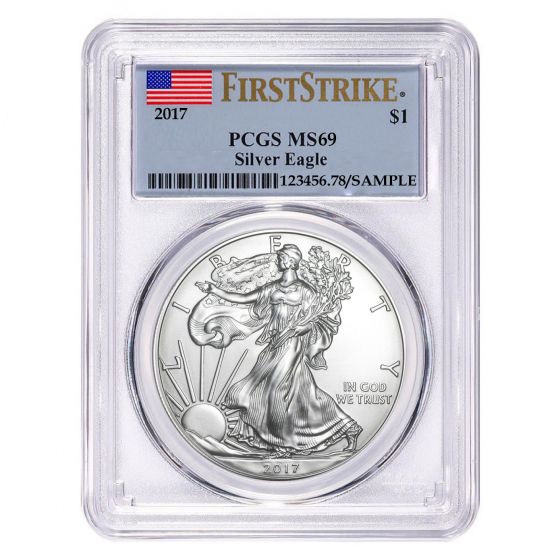 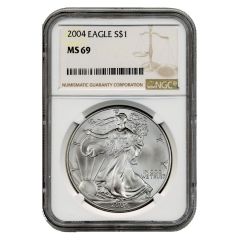 SD Bullion offers these 2017 PCGS MS-69 First Strike Silver Eagle coins at the lowest price in the industry, guaranteed. One of the most famous silver coins in the world, and the USA's official modern Silver Dollar, the American Silver Eagles have been valued precious metals products in the bullion market.

This 2017 release of the famous series of coins is graded and certified by PCGS (Professional Coin Grading Services). Moreover, these coins have been assigned a grade of near-perfect Mint State 69 (MS69). Additionally, PCGS has also awarded these coins the designation of 'First Strike,' signifying that each of these silver coins is from within the first 30 days of the release of this variant.

PCGS is one of the most well-known coin grading and authentication services in the world. In fact, founded in 1985, its seven founding dealers aimed to standardize grading. It began operations in 1986, under the leadership of David Hall, its president, and co-founder. Moreover, they boast having graded over 31 million coins to date, an impressive feat.

Every American Silver Eagle Coin contains exactly 1 troy ounce of 0.999 pure Silver, giving it a hefty weight of Silver in a reasonable size. Struck by the United States Mint, these coins boast an unmatched quality and design that makes them a highly desirable commodity.

The front of this coin bears the familiar image of Lady Liberty, featuring the rising sun in the backdrop. Seen striding forward, with the American flag draped around her shoulders, it is an elegant portrayal of an extraordinary American symbol. Patterned after Adolph A. Weinman's design on the Walking Liberty half-dollar, this coin celebrates a highly-acclaimed artist and his work.

Showcasing the famous Bald Eagle design, the reverse of this Silver coin displays the reason for its name - the American Silver Eagle. The Eagle clutches arrows in one talon while the other holds an olive branch - signifying the United States ideal for maintaining peace, without being afraid to attack if threatened.

Moreover, the outer rim of the reverse bears the name of the issuing country 'United States of America,' the face value of the coin '1 Dollar,' and the weight of Silver used in striking the coin '1 oz. Fine Silver.' The MS69 graded coins are a sought after item in the Silver Bullion market, as they are available for only a small premium over the ungraded variety.

American Silver Eagles have always been one of the most famous precious metals products in the world. Moreover, the backing of the United States Government, granting it legal tender status with a face value of 1 Dollar (USD), inspires confidence in investors.