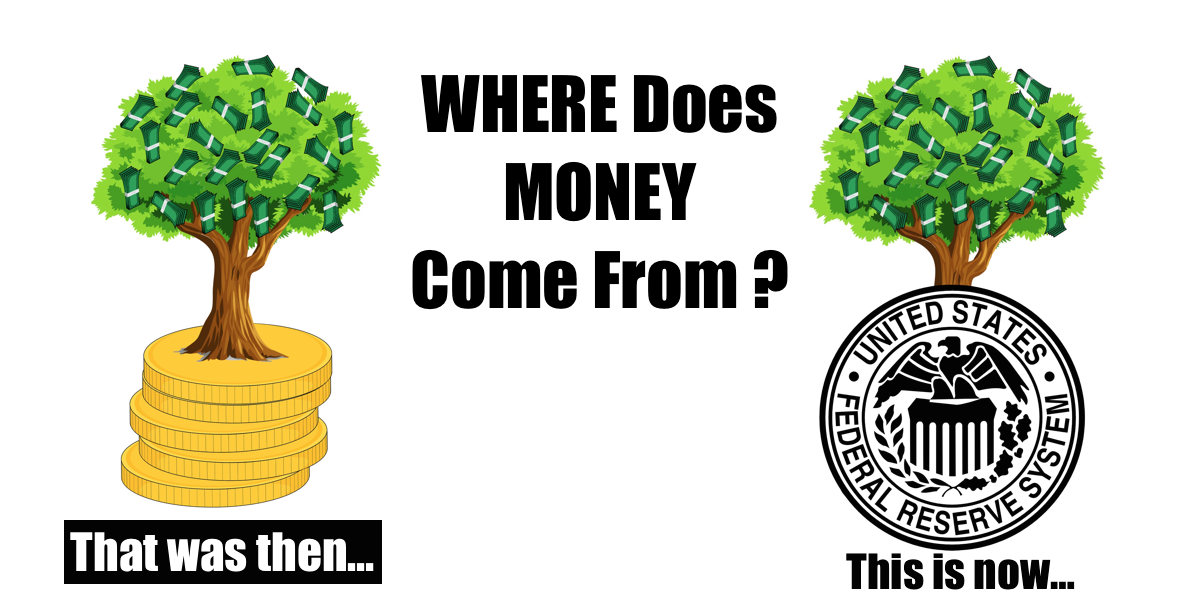 Where Does Money Come From?

Bank loans and other less liquid counter-party laden assets (stocks, real estate, private and government bonds) dwarf the amount of physical cash in a developed nation’s banking system. A former Federal Reserve board of governors, John Exter’s pyramid, helps illustrate this fact both back then and updated to today.

If fully understanding what a fiat currency is by definition, not enough to make you perhaps think twice about swapping some fiat currency into private bullion reserves. Maybe the following illustrations will help you understand just how fragile our so-called money and financial system can be when faith is lost, and push comes to shove.

While money by any strict private property definition should require it to maintain its value over millennia, we fallible humans over time have mistakingly given fiat currencies this coveted moniker of money. Doing so is much to the detriment of our environment and our mass well being but any history book could tell us these lessons.

But for this illustration, we will be mainly focusing on today's fiat currency debacle and what are reserve requirements for banks here in the USA and elsewhere around the world.

We pass along this not-so-gentle reminder for you to fully consider how the vast majority of most government fiat currency supplies come into existence today.

The key term to best understand this process is the bank reserve requirement ratio.

Reserve Requirement Ratio - (n) the portion of reservable liabilities (our bank deposits) that a banks or credit thrifts must hold onto, rather than lend out or invest.

A government’s private central bank sets the bank reserve requirement ratio. In the United States, that means the Federal Reserve sets this ratio which mandates banks hold a small fractional percentage money deposit in real cash notes as reserves in case of mass customer withdrawals. The fear and 'whatever it takes' policy attitude must stay in place to stop potential bank runs anywhere and at any time required.

John Titus of Best Evidence just released a short video describing how the vast majority of the United States’ M2 money supply currently comes into existence. Here is an original illustration of where most money comes from in the real world.

The following table below shows current reserve requirement ratios for USA banks as mandated by the Federal Reserve.

Often stated as an example for fractional reserve banking is a 10% ratio but the reality in the USA is much lower than this. 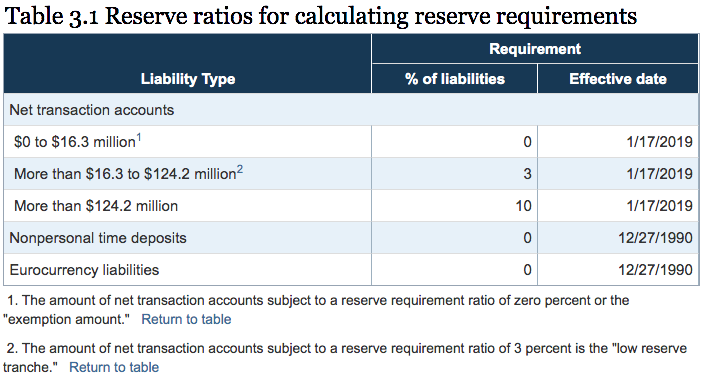 Countries such as Canada and the United Kingdom do not have any reserve requirements today.

The European Union is at a mere 1% reserve ratio requirement at the moment.

If the mass populace of countries stampede and demand deposits in real physical cash notes, the banking systems can and do fail without financial authority interventions.

This fact is an important reason why since the 2008 financial crisis, now supranational laws have been put on the books to potentially ring fence bankrupting banks with bank bail-in procedures, both here in the USA and throughout the G20 nations.

Also too, here in the USA, we now have money market redemption gates and fees as well as COMEX / NYMEX price circuit breaker rules to potentially help quell both commodity and precious metal price volatility in the coming years.

Capital Reserve Requirement - (n) the amount of capital a bank or other financial institution has to hold as required by its financial regulator to help govern the ratio of equity to debt, recorded on the liabilities and equity side of a firm's balance sheet.

These requirements are supposedly put into place to ensure that bank and financial institutions do not take on excess leverage and become insolvent. Think back to 2007 and 2008, then perhaps ask yourself if the financial system is less or more leveraged today versus back then.

Often too, longstanding GAAP accounting standards have been put on pause since the 2008 financial crisis, often replaced with Mark to Model and alternative accounting methodologies for both financial institutions and large publically traded corporations.

Perhaps this is but one reason why gold bullion has officially become accepted as a risk-less tier one asset by the latest Basel 3 bank regulations putting it on par with bank cash in a bank vault. It is not surprising that banks will begin to potentially diversify long term reserves into cash as fiat currencies get furtherly debased in the decade to come.

Given backtested proof of performance, these and many more contributing factors, perhaps we should consider a prudent private allocation to bullion for our private reserves. After all, buying record amounts of gold bullion is what central banks have been doing these past few years. Why not follow their lead?