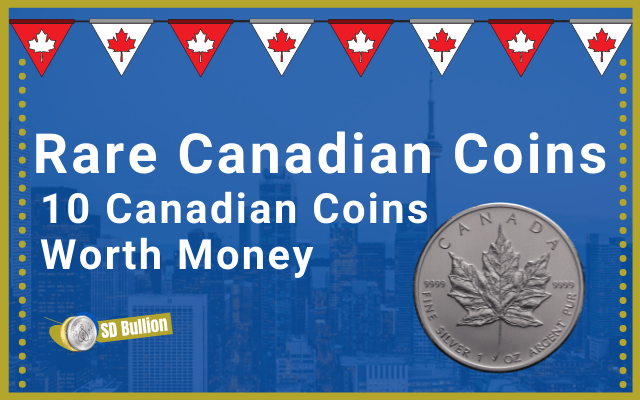 Even before Canada took its first steps towards becoming an independent country through the Canadian Confederation in 1867, coinage already existed in the British North American colonies. In fact, the first Canadian coins were minted in 1858 in England, in denominations of 1, 5, 10, and 20 cents.

For that matter, coin collectors can have a great fondness for Canadian coins. After all, these first issues date back almost two centuries. Not to mention that given factors such as their rarity, condition, metal content, or errors strikes, some coins can be worth a lot more than others.

Don’t be afraid to sift through your pocket change looking for some of these examples. Whether you’re looking to make a few bucks over a well-preserved coin or going after an interesting piece to kickstart a collection, or perhaps drawn to some of the world’s rarest coins, look no further.

In this article, we will show you 10 Canadian coins that are worth money. The list features some examples out of your run-of-the-mill varieties, as well as some of Canada’s rarest coins. In addition, we will explain why these coins are valuable, as well as how much they can be sold for.

What Canadian Coins Are Worth Money?

To begin with, there are different factors that come into play when determining the value of a coin. Most commonly, the scarcity of a specific Canadian coin, which equals its rarity. Collectors and numismatists are willing to pay well over the coin’s face value if it means adding a rare variety to their collection.

Nevertheless, other factors can also affect how much a coin is worth. Such can be the release year, the coin’s condition, if they have silver content, and especially mint errors, such as doubled dies or double strikes.

A Canadian coin’s estimated prices are a result of a series of sales and events like auctions over the years in and out of circulation. As previously mentioned, the following list includes both extremely rare varieties and other not-so-common examples.

They are sure to spark your curiosity and appeal to collectors. The list goes:

In 1987, Canada officialized a change in the design of the famous Canadian dollar coin, and over 200 million examples were minted. The Loon dollar, or loonie, displays the Northern bird on its reverse and is featured to this day in the 1-dollar coins.

Circulated examples of the loonie’s first year are generally worth face value in Canada. However, uncirculated issues can be worth from $17 up to $149 nearing perfect conditions (prices in USD $).

Canada’s 2-dollar coin was introduced in 1996. Following a similar procedure to the loonie, this coin was nicknamed the toonie. Valuable to note, the first 60 million examples of the 1996 toonie were minted using German planchets purchased by the Royal Canadian Mint. These first coins feature lines across their faces and have darker tones.

Circulated, the first toonies are worth their face coin value. Uncirculated examples can reach from $35 up to $540 nearing perfect conditions.

The Canadian cent, or steel and copper penny, was introduced in 1858 and is among the country’s oldest coin denominations. However, Canada ceased the production of the 1-cent coin in 2012, having the Royal Canadian Mint melt the pennies in circulation.

For this reason, preserved examples of the 2012 Canadian pennies can be sold, unironically, for more than a penny’s worth, given their numismatic value. An uncirculated coin may value from $0.04 to $33 in premium quality, with additional dollars if being from the non-magnetic variety.

Modern coins are generally minted using steel, nickel and, copper. Yet, silver used to be the common choice for coins such as the Canadian 5-cent coin or the U.S silver dime. As time progressed and precious metals' troy ounce prices increased in value, this resulted in the silver coin’s metal content becoming worth well over their face value.

In 1921, Canada passed legislation for the removal of silver from the 5-cent coin, replacing it with nickel. As a result, the RCM melted most of the preexisting examples made that year using silver. About 400 are believed to remain. It is considered The Prince of Canadian Coinage.

Following the removal of silver from the 5-cent coin, Canada introduced the use of nickel for such denomination. At the same time, the piece had a significant increase in diameter. The 1922 nickel, now made out of a nickel, is a landmark in Canadian money.

Before the loonie, or the Loon dollar, was introduced in 1987 to become a national symbol, the Canadian dollar had the iconic Voyageur design in its reverse. The voyageur dollar was struck from 1935 through 1986 and was known as the Canadian silver dollar until 1967. The silver dollar, like other denominations of Canadian silver coins, had a change in its content once the country's silver coinage started using nickel for coins in circulation.

With this in mind, pieces in uncirculated condition from their last year of mintage can be worth from $2 to $4 and reach from $11 to $70 nearing perfect conditions.

As mentioned above, Canada’s first coins were minted in England in 1858. These pieces had standard denominations in comparison to modern coins, with the exception of the 20 cent piece.

This coin was initially introduced because of the exchange value between the Spanish-American dollar and the Halifax shilling, both in use in the colonies. 5 local shillings were equivalent to 1 dollar.

In spite of that, the population found it difficult to distinguish the 20 cent piece and the U.S quarter, given that American coins also circulated in Canada. The Canadian coin was discontinued and eventually replaced by the Canadian 25 cent piece. It is nowadays considered a historical item of certain monetary value.

As it happens with the 1921 nickel, Canada's first five-cent piece also has a silver composition. Before the common use of gold coins and silver as an investment avenue in the bullion industry, silver circulated in national coins. This issue had over 1.4 million examples minted by England in 1858 and, unlike the Prince of Canadian Coinage, didn’t have most of its existing examples melted.

Although still rather rare, such piece of history is usually worth, circulated, from $6 to $160. Uncirculated examples range from $290 to $2500.

During the early 20th century, demand for the 50 cent piece varied dramatically among Canada’s population. A stock of over half a million coins dating 1920 and 1921 remained in storage in the Royal Canadian Mint until 1929. The stock included all the 1921 examples minted.

The Mint decided to melt this stock when the demand rose once more, using it in the mintage of more recent coins. All but less than 200 examples remain.

As is traditional to Canadian coinage, the obverses of all pieces minted bear the effigy of the British reigning monarch. Nearing the end of 1936, Edward, after succeeding his late father George V, suddenly abdicated the throne. This led to complications regarding the production of the 1937 coins. It forced the Royal Canadian Mint to restart its planning.

In early 1937, the shortage of 1, 10, and 25 cent pieces led to the production of new coins bearing the old 1936 design. The RCM differentiated this batch of coins by adding a dot mark in their reverses. Yet, only the 25 cent examples were circulated.

There are only 3 known examples of the one-cent piece, and one belongs to the Bank of Canada. To illustrate their reputation, one of these coins in specimen condition was sold for a record of $402,500 in 2010.

How To Properly Store And Safe keep Your Collection

A coin collection requires proper care and attention. The truth is, maintaining a hobby that is able to provide countless enjoyable moments goes beyond just simple aesthetics. In view of that, here are a few tips to help better take care of your prized collection.

Make sure to store your collection in a location safe from humidity, direct sunlight, and stable temperatures. By doing so, experience shows that your coins are more protected from oxidation and tarnish;

Never handle and manage coins using your bare hands. Our natural oils and microscopic dirt can greatly damage a piece’s value. Experts recommend the use of cotton gloves;

The proper display of your collection can be done through PVC-free sealed cases, as well as chemical and acid-free albums, tubes, or holders. This method can ensure safety from eventual physical damage;

Specialists recommend entrusting professionals for the proper cleaning and assessment of your coins. An untrained touch and inadequate tools could most likely harm a piece.

Learn more about the coin collecting supplies in our article

How to know if my coin is real?

If you think the coin you have is valuable, experts suggest having it appraised by a professional, such as PCGS or NGC. By doing so, you’re able to know exactly the type and condition of your item.

Where do I buy coins for my collection?

Coin collecting has greatly expanded as a hobby. For this reason, online dealers, retailers, as well as the Mints themselves can be a great source when looking for coins. As a cautionary step, a collector may look into a piece’s mint of origin for a catalog of trusted, known sellers.

How do I sell my coins?

Collectors can sell their pieces online through established retailers like SD Bullion, numismatic forums, and other topic-related websites. In addition, you may wish to have your items examined by a professional. Experts of the coin industry can assist you in taking the proper steps for a secure sale.

Canada has a rich history in the world of coinage. The country’s almost two centuries offer plenty of different examples for collectors to fascinate about. Be it as a hobby or an interest in some of the world’s rarest coins, we hope our list helped in discovering the value in a few out-of-the-ordinary Canadian coins.

Yes, certain coins may be a lot rarer than others. Yet, you never know for sure what you might stumble upon on your pocket change. Whatever the case may be, getting to know such intricate pieces of history can be a rewarding experience overall.