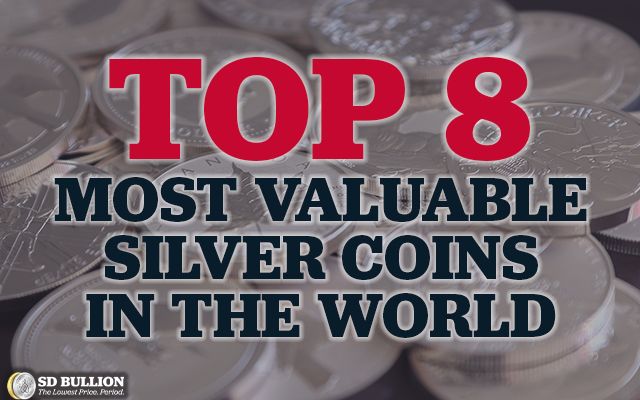 Top 8 Most Valuable Silver Coins in the World

Top 8 Most Valuable Silver Coins in the World

Theories on the origin of money are widely divided among historians, economists, and anthropologists. It is popularly known that mankind began trading by simply exchanging goods for goods and some experts believe that early forms of currency (such as shells, live cattle, or even precious metal ingots) were spontaneously used by common people in order to solve bartering disputes.

Others believe, however, that the earliest form of money originated in Mesopotamia (modern-day Iraq) around 5,000 years ago. Using standardized weights of silver, the rulers used to measure wages, taxes, and fines, as well as set debts between two trading parties.

As millennia went by, local governments, especially in Lydia and Ancient Greece, started stamping specific amounts of silver in order to dismiss the need of weighing the metal every time a trade occurred, thus creating the first silver coins.

For thousands of years, a bimetallic standard of monetary system that used a fixed ratio of silver and gold as units of currency spread around the world, including in the newly independent United States of America.

The Coinage Act of 1792, passed by the US Congress, established the creation of the Philadelphia Mint and specified designs and the ways of production for copper, silver, and gold coins, basically laying down the foundation of American currency.

However, in contemporary society, the gold and silver standard could not withstand the inflation and debasement of currencies, which led the way to the creation of a form of money that wasn’t backed by any commodity, known as fiat currency. In the United States, it occurred in 1971 when President Nixon introduced a law to abandon the direct convertibility of the U.S. dollar into gold.

All these changes in monetary policies, along with the fact that the coins in this list were able to survive the test of time and were around, in circulation, during war and peace, prosperity and economic crises, are the key factors to why they are so valued by collectors and numismatists.

The whole list below is made of coins composed of a majority of silver that were actually sold at an auction before and include both the most expensive coins in the United States and the world.

Note that only one specimen of each coin is included in the list, in spite of others having been sold by expressive amounts as well. For instance, many specimens of the 1804 Bust Dollar were sold at incredible prices, but only the highest-selling one was included in the list.

The Seated Liberty was a design used by the US Mint for the Dollar coin from 1840 to 1873. It depicted, on the obverse, the female figure Liberty seated on a boulder. She is holding a liberty pole topped with a pileus on her left hand while resting a 13-striped shield (representing the thirteen original colonies) on the floor, next to her, with her right hand. The portrait is outlined by thirteen 6-pointed stars.

All silver coins prior to 1870 are pretty rare on their own, not just because they are old, but because many of these coins were melted down after the California Gold Rush. At the time, gold prices dropped as low as the price of silver, and people started hoarding silver coins for their intrinsic value. In 1873, Congress would pass another Coinage Act ending bimetallism in the US and temporarily establishing the gold standard in the country.

And thus, the mysterious existence of the 1870-S Silver Dollar and its rarity combined was the cause for its outstanding achieved bid price.

In 1796, by popular demand, the US Congress commissioned the creation of a new design for the half-dollar piece. The Draped Bust, designed by Robert Scot, was first issued in 1797, replacing the “Flowing Hair” design.

It featured the bust of allegorical female figure Liberty with draped hair with the word Liberty on top and the mint year on the bottom, with fifteen six-pointed stars on the outer rim.

The reverse was engraved with what came to be known as the “small eagle” design, which was scrapped in 1798, making this 1797 version of the half-dollar, very rare to obtain.

One of the most sought-after American silver coins is the 1894-S Dime. Only 24 of these proof coins were minted in San Francisco that year. Why only 24? Nobody knows for certain. One theory is that the superintendent of the San Francisco Mint ordered their production with the intent to gift them to important bankers.

Legend says the superintendent gave three of these coins to his daughter and that she spent one of them in a dish of ice cream and sold the other two in the 1950s.

Both sides of this coin were designed by Charles E. Barber, hence the name Barber Dimes.

Curious about the most expensive gold coins in the world? Check them here!

The Ancient Greeks were one of the precursors in the making of silver coins. For centuries, their monetary system was silver-based with their drachma, which weighed 4.3 grams of silver (in the Attic standard). The decadrachm weighed 43 grams of silver and was worth 10 pieces of the drachma.

This specimen belonged to the collection of oil executive Nelson Bunker Hunt, whose attempt in the early 1980s to corner the silver market eventually caused it to collapse.

Only two specimens of the 1704 Silver Rouble are known to still exist and it fetched the whopping amount of $3,858,850 at a public auction in 2012, a record for any Russian coin.

The lettering on the obverse of this Red Mint product states “Tsar Pyotr Alexeyevich Ruler of the whole Russia”, and the translation of the reverse is “Good coin, price - ruble 1704”.

Trade coins were, essentially, quasi-bullion coins that could be used as export goods. In other words, they were used in international trades to import goods.

The Coinage Act, passed by Congress in 1873, approved the issuance of trade dollars (that were also legal tender inside the country). Business strikes were only produced until 1875, but the Mint kept producing proof versions until 1885. However, only five examples of the 1885 Trade Dollar were actually minted, and, for over twenty years, they were thought to not exist at all. All five samples are still known to exist.

Trade Dollars were re-monetized by the Coinage Act of 1965. Both verses of the coin were embellished by designs created by William Barber, Mint Chief Engraver from 1869 until his death in 1879.

The story of the 1804 Bust Dollar (also known as the Bowed Liberty) is full of mystery and confusion. First of all, in spite of being dated 1804, they were actually minted in 1834 or later. They were, initially, intended to be given away as gifts by diplomat Edmund Roberts on his diplomatic trips to Siam, Muscat, Japan, and Conchinchina.

These coins, produced by the Mint for diplomatic purposes, are known as the Class I 1804 Bust Dollars. They went unnoticed by the numismatist community until 1842, when a publication, signed by two Mint employees, showed a picture of one of these silver coins.

Only fifteen specimens, from Class I, II and III, are known to still exist and they have sold by millions of dollars at auctions. However, the highest-selling specimen was a Class I sold in 1999 with the incredible amount of $4,140,000.

Until 1792 all circulating coins struck in America were done so by private refiners under the regulation of each individual State. However, that changed when the United States Federal Government, led by President George Washington, urged Congress to create a unified coinage system and a national Mint.

Congress responded on April 2nd of 1792, by passing the Coinage Act which created the US Mint’s first branch in Philadelphia (at the time, the nation’s Capital).

Mintage began slowly in the newly established three-story refinery in Philadelphia as Mint employees lacked the experience in designing and engraving of coins, and the operations were initially done with a crude horse or man-powered machinery.

The 1794 Silver Dollar is, therefore, the first-ever US Dollar coin to be officially minted and issued by the United States Mint and it was based on the Spanish dollar (at the time, already largely in use in the country).