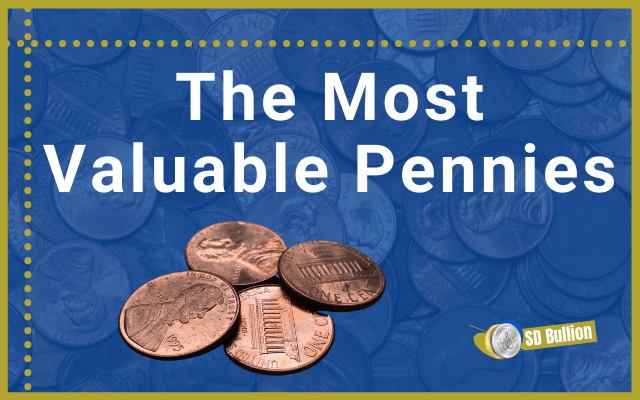 The U.S. one-cent piece, commonly known as the penny, was one of the original denominations minted in the United States and remains a staple of American coinage today.

Although a penny’s value is just a cent, many rare or unusual pennies are worth far beyond their face value and have sold for jaw-dropping amounts at auction. Who knew that a small piece of copper could be worth so much? But the interesting question is which pennies are worth a lot of money?

This article will first give you a brief history of the penny, followed by a look at what makes a penny valuable, and will conclude with a list of the 19 most valuable pennies ever sold.

A Brief History of the Penny

The name “penny” has been around for hundreds of years and is used to denote the smallest monetary unit in several currencies worldwide.

The first American cent was the Fugio or Franklin cent, designed by Benjamin Franklin and minted only in 1787. The U.S. penny came into existence with the Coinage Act of 1792 when the first one-cent coins were minted in Philadelphia in 1793.

Although pennies are the smallest denomination of U.S. currency, that hasn't always been the case. The U.S. minted half-cent coins up until 1857, and they were also made of copper.

Pennies were made of 100% copper up until 1857 when the copper content was dropped to 88%. Since 1982, pennies have been made up of copper-plated zinc — primarily zinc with only 2.5% copper.

Along with the metal content, the penny designs have also changed several times over the years. The Lincoln penny, which most people are familiar with, was originally minted in 1909 to commemorate Lincoln’s 100th birthday.

What Makes a Penny Valuable?

Now that you know the penny’s history, let’s discuss why the pennies on the list below are as valuable as they are.

The main factor affecting value is a rarity, or how many of a particular penny exists. The penny’s rarity is affected by the mintage (how many were originally produced), the surviving population (how many are left), and whether the penny has any errors or was unusual in any way.

The other main factor affecting value is condition. The closer a penny is to mint condition, the more it will be worth for that particular mintage year and mintage location. Proofs or other uncirculated coins may also be more valuable.

Check out more: What are pennies made of?

What Pennies are Valuable? The 19 Most Valuable Pennies Ever Sold

Now that you know the history of pennies and why some pennies are worth money, let’s dive into the 19 most valuable pennies ever sold.

This list will go from the most expensive penny ever sold to the least. Although there are many examples of valuable pennies worth far more than their face value, we’ve narrowed the list down to pennies valued at five figures or more.

The highest valued penny on this list is the 1943 D Lincoln Bronze penny, which resulted from an accident. The U.S. switched from bronze to zinc-plated steel pennies in 1943, but many bronze pennies still managed to slip through. Less than 20 are estimated to have been released by the Philadelphia and San Francisco mints. However, the rarest was this penny, the single example known to have been produced by the Denver Mint.

The 1944 S Lincoln Steel penny is extremely rare, with only two known to have been produced. This rarity is because these pennies weren’t supposed to be produced at all but rather were the result of zinc-plated steel planchets somehow ending up in the coining press at the San Francisco Mint.

One of these two was in circulation before being acquired by a collector. However, the penny on this list was uncirculated and was extremely well preserved, taking the second place in the list of the most valuable pennies ever sold.

This is yet another rare penny, but this time the rarity is due to its die variety. Only three of these pennies are known to exist, and all three are in mint condition. The condition has led some to speculate that these may have been smuggled out of the Mint by an employee.

This is another example of a 1943 penny struck on bronze by accident, but in this case, the penny was minted in San Francisco, where six known examples of these pennies were released. While rare, it isn’t as rare as its Denver cousin.

The wheat penny and the Lincoln Head design debuted in 1909. One version of this mintage year had the initials of the engraver, Victor David Brenners (V.D.B.), on the reverse side. This proof penny has all three of the initials, and only 1,194 were struck at the Philadelphia Mint before the initials were removed. This coin is not only rare, but this particular one features brilliant colors from being stored for more than 100 years.

The price of copper rose during this year, making it cost more than a penny to produce. Previous pennies were about the size of a half-dollar, so to cut costs, the Mint reduced the penny’s size to its current size. The Mint produced a batch of 800 of the new pennies for Congressional approval, and any of these pennies is a rare find.

This is another example of a 1943 penny struck on bronze by accident. This penny does not have a mintmark. This particular penny was uncirculated and still retains its original copper-red color.

1864 Indian Head Penny with L on the Ribbon

James B. Longacre designed the Indian Head penny, which was first issued in 1859. The Civil War was still dragging on in 1864, and many people hoarded precious metals to store wealth, making it difficult for the Mint to make coins. The “L” was added to the ribbon’s tail about halfway through the year, and while around 5 million of these coins were made, few of them remain in uncirculated condition.

There were a large number of these coins circulated, and these are typically worn. Thus, an uncirculated coin of this mintage in mint state is rare and valuable.

This is the rarest date of the Indian Head pennies, resulting from an economic slump in 1873. This slump meant that saving even a penny for collecting was not an option for most people. Thus, an 1877 Indian Head penny in the uncirculated condition is exceedingly rare.

This coin is valuable primarily because of its date and mintmark. This year, there was extremely low mintage, and it’s rare to find an uncirculated example with its original copper-red color.

This is the newest penny on this list, but its value comes not from its mintage year but its double die error. It was initially believed that these were counterfeit coins, and five examples were destroyed before it was realized that these were genuine coins. Uncirculated examples for this coin with the double die are scarce.

As with the 1877 Indian Head penny, the 1872 version came when people were unable to afford to collect. Thus, most of these pennies can be found in circulated condition. This particular example is in excellent condition and retains its red copper color.

In the first mintage year of the wheat and Lincoln Head designs, less than half a million pennies were minted with the designer’s initials before the design was changed to omit them.

This is the Denver Mint version of the Steel penny previously discussed. What makes this penny unique is that it was struck on a zinc-coated steel planchet, primarily used in 1943.

As with the 1944 S and D pennies described above, this penny was minted by accident. The difference is this example does not have a mintmark.

Normally, the 1914 S penny would not be a rare find because 4 million of them were minted in San Francisco. What made this particular coin valuable is its nearly mint condition because most coins from this year are well-worn.

Only a few of these pennies were minted and were released by error into the supply because the pennies minted this year were supposed to be steel.

Value: A penny of this year and metal in mint condition is valued at $85,782.

The 1873 penny is one of the key dates for the Indian Head pennies and thus has relatively high value.

Pennies, formally known as one-cent pieces or simply cents, have existed since the inception of the U.S. Mint.

The penny has gone through many different designs, sizes, and metal compositions throughout the years, and there are many rare pennies out there that will cost you, well, a pretty penny.

SD Bullion’s list above covers the 19 most valuable pennies ever sold, but there are plenty more out there to keep an eye on and to collect.

Michael is a contributor to SD Bullion and the founder of Your Money Geek, where he is on a mission to make finance fun. He has worked in personal finance for over 20 years, helping families reduce taxes, increase their income, and save for retirement. Michael is passionate about personal finance, side hustles, and all things geeky.