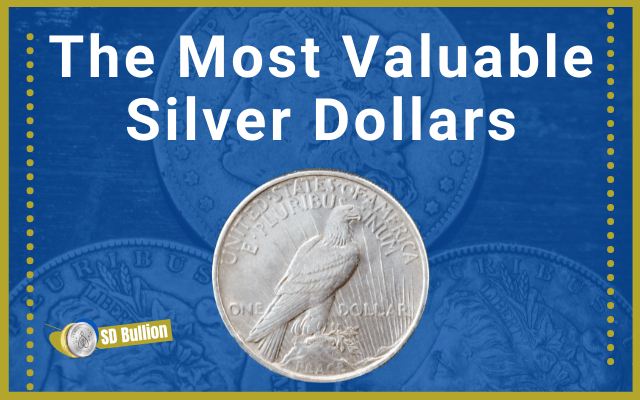 The Silver Dollar has always been an iconic coin throughout American history. Ever since the first coin minted back in 1794, the United States Mint has released more than ten different designs for the Dollar coin, including proof versions, patterns, and special strikes. But only a few of those coins, minted before the ending of the silver standard and the beginning of the full-fiat currency era in the 1970s, are indeed made of silver.

In this article, we will cover the most important designs from Silver Dollar history and list the top 30 most expensive sales from public auctions.

One of the rarest silver dollars in existence. The Flowing Hair Silver Dollar was the first Dollar design. The United States Mint launched the coin in 1794 and minted only until 1795. Its size and weight were based on the Spanish Dollar, already largely at use in the US.

Its alloy had 90% silver and 10% copper. The design is a creation of Robert Scot, the 1st Chief Engraver of the United States Mint.

The obverse portrays a bust of Lady Liberty with her hair waving with the wind, hence the “Flowing Hair” moniker. The reverse shows an eagle. Both figures were required by the Coinage Act of 1792. Liberty’s design is closely related to Scot’s design for the cent, but with no Phrygian Cap. Also, Scot was instructed to add a wreath around the eagle on the reverse and to move the denomination to the edges.

The final version included fifteen six-pointed stars on the obverse, with the word “LIBERTY” on top and the mint year on the bottom. On the reverse, surrounding the eagle and the wreath are the words “ UNITED STATES OF AMERICA”.

The most expensive silver dollar coin ever sold at an auction was a Special Strike Flowing Hair Silver Dollar for the astounding amount of $10,016,875.

The Draped Bust Silver Dollar is a dollar coin the United States Mint produced from 1795 to 1803. The composition was adjusted to 89.2% silver and 10.8% copper, as determined by the Coinage Act of 1792.

It is not entirely sure as to why the US Mint discontinued the original Flowing Hair design. It might be due to public disapproval, or because the newly appointed Mint Director Henry William the Saussure decided to redesign the American coinage.

The most notable change in design is obviously on the obverse. Lady Liberty’s features and the wavy hair are much more detailed, and now her hair is tied on the back with a drape.

From 1836 to 1839, the United States Mint released very small quantities of a Dollar coin which came to be known as the Gobrecht Dollar, named after US Mint Chief Engraver Christian Gobrecht. After a 30-year hiatus from silver dollar production, the Federal Government was testing the waters to see how the economy would react to the introduction of more dollar coins into circulation. In 1840, they released the Seated Liberty Dollar coin, which had basically the same obverse design of Lady Liberty seated on a rock, holding a pole with a Phrygian Cap on top, and resting a shield on the floor. Encircling the figure are thirteen 6-pointed stars representing the original colonies. The mint year is engraved on the bottom.

The reverse was completely changed for this version of the coin. Instead of the soaring eagle, present in the Gobrecht Dollar, it now showed a primitive version of the heraldic eagle used for the original American Silver Eagle reverse. The eagle has a shield on its chest and grasps olive branches and arrows on its talons, representing America’s desire for peace, but readiness for war. The motto “IN GOD WE TRUST” was introduced in 1866. Encircling the design on the outer rim are the words “UNITED STATES OF AMERICA” and the denomination on the bottom, abbreviated to “ONE DOL.”

After the California Gold Rush, silver prices and the U.S. Government had a hard time trying to regulate and stop the population from hoarding and melting silver coins. After a series of legislations on the matter, silver coin production was officially halted with the Coinage Act of 1873.

Another one of the rarest silver dollars around. The Trade Dollar was a quasi bullion Dollar coin first struck in 1873. It served the purpose of international trade. The United States released it as a way to compete against other Trade coins already popular in East Asia. Business strike coins were halted and the coins were demonetized a few years after launch, but proof versions kept being struck until 1883. They were re-monetized with the Coinage Act of 1965. These silver dollar coins are quite popular among collectors.

William Barber, 5th Chief Engraver of the U.S. Mint, designed both verses of the coin. The obverse features a seated Liberty offering an olive branch, symbolizing peace, with Her right hand. Thirteen six-pointed stars representing the original colonies encircle the figure with the mint year on the bottom. The reverse shows an eagle grasping arrows and olive branches on its talons. The words “UNITED STATES OF AMERICA” are inscribed on top, and below the eagle are the words “420 GRAINS, 900 FINE.” and “TRADE DOLLAR”.

After the Coinage Act of 1873 which temporarily ended the silver standard in the U.S., silver miners lobbied for the return of the precious metal to legal tender status and the free coinage of silver. In 1878 large quantities of the Morgan Silver Dollars were minted. Production ran until 1904 and was minted again in 1921.

George T. Morgan designed both verses of the coin. The obverse portrays a bust of Lady Liberty as modeled by Anna Willess Williams. The motto “E PLURIBUS UNUM” is inscribed on the outer rim, along with the mint year.

The reverse shows an eagle clasping arrows and olive branches. The motto “IN GOD WE TRUST” is on top, with the country’s name and denomination around it: “UNITED STATES OF AMERICA ONE DOLLAR”.

Morgan Silver Dollars are one of the most popular silver coins among collectors and silver investors.

The United States Mint introduced the Peace Silver Dollars in December 1921 to celebrate the newfound peace after the World War. They chose the design via a competition. The winner of the event, Anthony de Francisci, won $1,500 in prize money. His design was unanimously chosen.

Francisci based the features on his portrayal of Goddes Liberty on his wife, Teresa de Francisci. It shows a bust of Liberty facing left, wearing a spiked crown, resembling the one on the Statue of Liberty. The obverse also includes the word “LIBERTY” on top, the motto “IN GOD WE TRUST”, and the mint year on the bottom.

The reverse portrays a bald eagle, resting on top of a cliff. It gazes ahead as the sun rises on the horizon. The eagle clasps an olive branch on its talons, symbolizing the country’s desire for peace. On the outer rim, on top, is written “UNITED STATES OF AMERICA” and the motto “E PLURIBUS UNUM”. The bird is sculpted in between the denomination “ONE DOLLAR”. On the outer rim, below, is the word “PEACE”.

The Rarest and Most Valuable Silver Dollars

SD Bullion is the place for you to find Silver Dollars and other 90% Constitutional Silver coins at the lowest premiums over the spot price of silver. Our variety of silver Dollar coins should be enough to satisfy investors and coin collectors alike.

If you have other demands or questions not answered above, feel free to talk to one of our agents through our live web-chat feature at the bottom right of your screen. You can also contact us over the phone at 1(800)294-8732 or via email at sales@sdbullion.com.