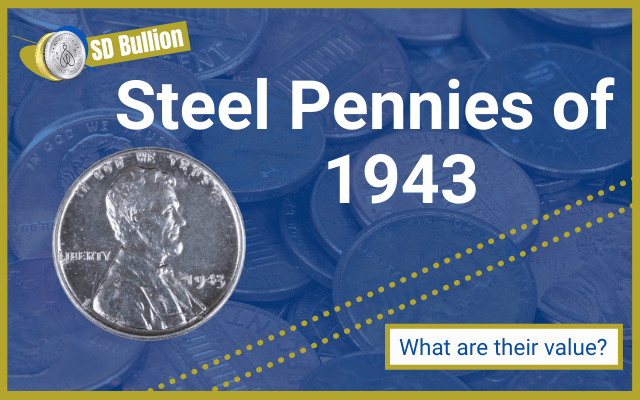 One of the most controversial and emblematic coins the United States Mint ever produced is the 1943 Steel Penny. Its interesting history relates to the United States’ involvement in World War II. Most people think every penny the US has produced was made of bronze. That is why this silvery coin has even received the moniker of “silver penny”. But this specific strike is not as rare as you might think. Keep reading to find out more about the Steel Lincoln Wheat Penny and what other 1-cent coins from 1943 might actually be worth a considerable dollar!

History of the 1943 Steel Wheat Penny

In 1941, the United States of America joined forces with the Allies in the fight against the Axis in what came to be known as World War II. One of the country’s efforts during the war was to prioritize the use of copper in favor of military equipment, such as ammunition. That caused a shortage of metal in different sectors of the industry at the time. That includes the coin production in the US Mint.

Unable to use copper in various coin denominations (which included the Lincoln Cent and the Jefferson Nickel), Congress prompted the Mint to search for a substitute (yet temporary) for copper. Different metals and other materials, including plastic, were considered and tested. Ultimately, Congress approved a composition of 99% steel and a thin layer of zinc coating.

The alloy resulted in a coin very visually different from its previous issues in terms of coloration. Being mostly made out of steel, with a thin zinc plating, the 1943 penny turned out to be shiny as silver. Many started calling it “the silver penny” because of that. And many people not really involved with the numismatic community actually thought it was made with silver.

The steel Lincoln Cent was not a big hit, though. People didn’t like the fact that it resembled a nickel and would often mistake one for another. Also, as the zinc coating would wear off, it revealed the steel core. With time and exposure to the moisture from sweaty palms, the coins would corrode badly. The following year, the mint brought back the original 95% copper and 5% zinc alloy.

The US Mint struck over 600,000,000 of the Lincoln Wheat Penny in 1943, which is a fairly large mintage. Thus, it is safe to say that the coin is pretty common in numismatic terms. Specimens in circulated conditions aren't worth more than 15 to 30 cents. According to the PCGS coin price guide though, uncirculated coins can be worth from $7 (graded MS60) to $3,500 (graded MS68).

However, there were some error strikes that year that can sell for 5 or even 6 figures. Some copper planchets leftover from 1942 ended up being mixed with the steel planchets and got struck with the 1943 dies. A bronze cent bearing the 1943 mint year has sold at Heritage Auctions for a record price of $372,000.

Interestingly enough, in 1944, when the US Mint should have returned to the bronze alloy, some zinc-coated steel planchets ended up in the pressing machines and were struck with the 1944 mint year. The 1944 Steel Penny is extremely rare. One specimen in mint state (graded MS66) was sold at an auction for $408,000 on August 22, 2021!

Check out our list of the most valuable Wheat Pennies

How to Identify a 1943 Steel Penny

Many ill-intentioned people have tried plating a steel cent with copper to make it look like a 1943 bronze Lincoln cent. However, it is pretty easy to identify a steel penny. All you need to do is use a magnet. Steel is a magnetic metal, whereas copper is not. If the coin is attracted by the magnet, it is a steel penny and is likely not worth a considerable value. If it does not react to the magnet, then you might have found yourself quite a big penny!

Another difference is that copper cents weigh 3.11 grams. Steel cents, on the other hand, weigh 2.702 grams.

Another scam involves altering the date on the coin. For instance, taking a 1948 copper penny and scratching the last digit to make it look like a number 3. But the 3 in the original 1943 steel and bronze cents have a long tail (as seen below). You should be able to identify a fake by matching a real coin with a fake side by side and comparing that last number in the mint year.

As we have covered before, 1943 steel pennies are pretty common. However, if your penny is made of bronze (copper and zinc), or even another unknown composition, it might be a rare find. Take it to a trusted coin dealer to confirm you have a rare penny at your hands. You can test the metal composition with a magnet. If it sticks to the magnet, it is made of steel.

What makes a 1943 steel penny valuable?

Condition and rarity are key in determining a coin’s value. According to the PCGS coin price guide, a 1943 steel penny in uncirculated condition (graded MS60 or above) is currently worth from $7 (MS60) to $3,500 (MS68).

Yes. Scammers plate a steel penny with copper to try and pass it off as a 1943 bronze cent. As we have mentioned before, you can use a magnet to identify it. Another scheme involves altering the dates from other issues. Check the long-tailed number 3 in real 1943 pennies and compare it to possible fakes to identify them.

The copper-zinc penny, made with leftover bronze planchets from 1942 is the most valuable variation (or error coin) from the 1943 mint year.

SD Bullion is your home for numismatic bullion products at the lowest prices online guaranteed! We have a range of platinum, silver coins, and gold coins in our inventory to satisfy the needs of an investor as well as the enthusiasm of a coin collector. Make sure to reach out to one of our customer support representatives in case you have any questions. We are available over the phone at 1(800)294-8732 and at sales@sdbullion.com. You can also talk to us through our live web chat feature.