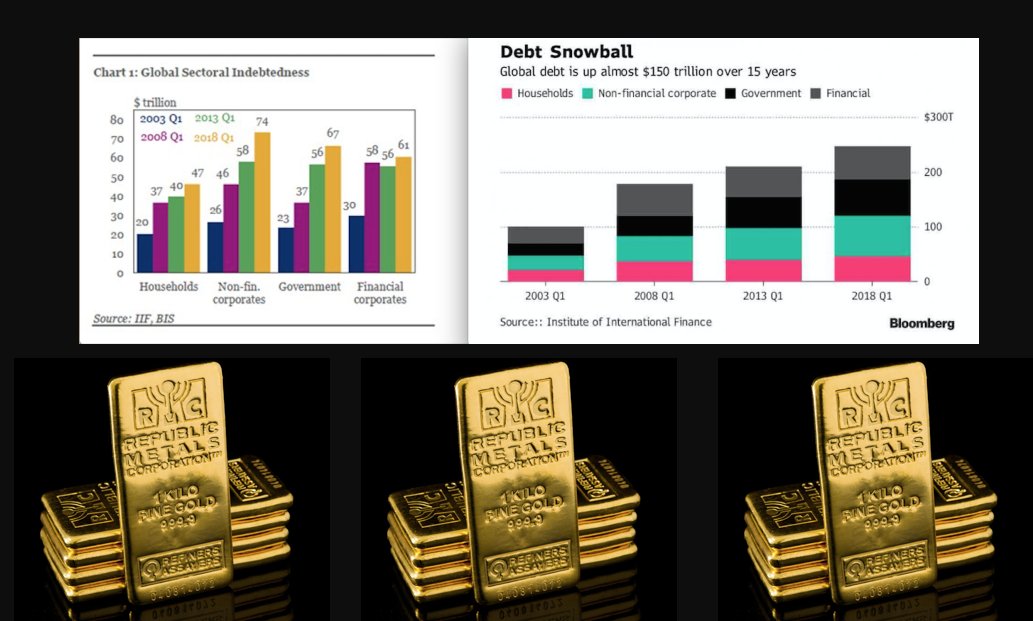 For those paying attention, total global debt levels have been rapidly rising since the Global Financial Crisis of 2007-2008.

Being bullion buyers ourselves, we of course covered the ever increasing Record World Debt Levels in our 21st Century Gold Rush. Yet the total world debt figures have shot up an amazing $32 trillion USD in roughly 12 months since publishing that total world debt data.

Gold has often been historically used as an anchoring mechanism in global financial resets of the past (e.g. Gold confiscation to the Bretton Woods agreement, the more recent 1980 gold price record which fully accounted for the debasement of the US dollar at the time).

We appear to still be running an infinite expansionary monetary policy in a finite world of both real resources and time.

The Institute of International Finance regularly updates today's total world debt data, which is now likely past $250 trillion USD as we are now in Q3 of the year 2018 (the data is only currently updated to Q1 2018).

Good luck to anyone on earth trying to wrap trillions of inputs of those mind boggling figures through their mind. Omniscience is not a human trait.

Perhaps more easily understood, we are now living in a world with debt levels are over 318% of the global domestic product (GDP). 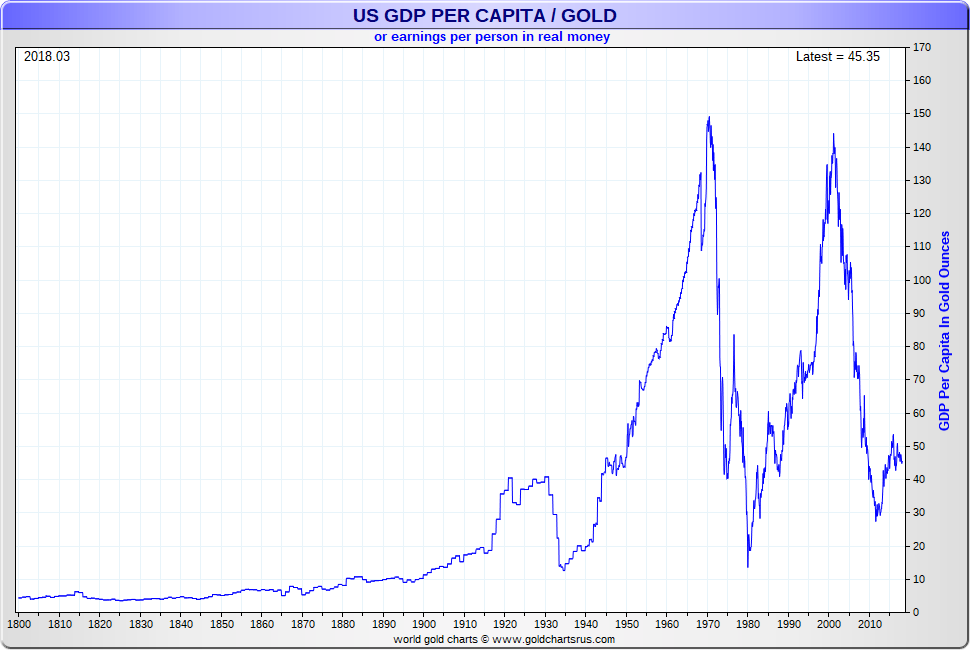 The US GDP per capita / US dollar gold price chart above looks as if we will be revisting near the teens and 10s trend line perhaps some time in the 2020s.

Now more than $249 trillion USD in global debts on the books, it is even easier to be bullish future gold bullion values especially given where they are today versus other much more highly valued debt laden asset classes.

Having been and likely living ahead under a structural situation in which Real Interest Rates (the actual interest you get on loaned funds vs real underreported inflation) will likely remain well below Real Price Inflation.

Curretly and most likely moving forward we will continue living in a world of inflationary data disconect in which older more accurate meaures of price inflation state we running around 10% per year while the US Federal government's BLS underreports adjusted inflation at around 3%.

With a compounding negative real interest rate gap of 7% financial repression, the US government can cut its real debt and unfunded liability pile by about half in just over 10 years time.

An estimated $210 trillion USD in combined US debts and unfunded liabilities will likely be semi-defaulted upon by price inflation in the coming decades.

Default through price inflation is the typical route heavily indebted governments take throughout history. For example, the US dollar was devalued some 70% to gold in the early middle 1930s.

This time apperas much larger, and more complex in the methodolgies utilized, but the financial repressionary affects will likely be somewhat similar. Sovereign quasi-default through long term sustained fiat currency price inflations.

The term 'debt supercycle' refers to a long period of intense and persistent increase in leverage throughout the economy.

The last major debt supercycle end, started with the crash of 1929, followed by a sudden and nearly 70% US dollar devaluation to gold post 1933 confiscation, and ultimately bottomed following World War II.

Like the last version, this one will end again with many losers, and various winners.

As mentioned, cycles of increasing high debt levels trace most recently back to the Great Depression when, in trying to keep a severe financial contraction from recurring, the government stepped in with hopes to help smooth out business cycles — by increasing government spending and establishing fiscal policy.

Persistent government interventions to minimize economic recessionary impacts after World War II may have been effective in the short term.

Yet they all came at a price.

Fiat currency debt-derived stimulus means that the excesses of the economic booms no longer fully washed away in recessions. Every new economic upturn carries debt levels and imbalances that grow higher and higher with each cycle.

That has led many to identify historical multidecade debt supercycles of increasing debt levels which we are likely nearing the end of one now.

Today’s debt supercycle, is different from prior ones in that it is structured differently and global in scope.

This version includes not only government, corporate, and household debts. It also includes dramatically increased debts levels from both well-developed economies and emerging markets like China for instance.

That means that major financial events in these markets will likely be connected and possibly cascading into financial spillovers in which many parties around the world increasingly want their money back, immediately.

Just look back at relatively recent global economic crisis to crisis episodes. Start with the crises in Asia (1997), then Jim Rickard's Long-Term Capital Management hedge fund (1998) implosion, to the internet and housing bubbles bursting in the 2000s. Suppsed financial outlier events like those have helped form one interconnected buildup of record debt levels of some $1/4 quadrillion USD we have today.

This ongoing debt supercycle continued with unconventional monetary policies adopted after 2008. Yet we merely called timeout, and put the debt expansion peddle to the floor with about a 40% increase total debt levels since the fall of 2008.

While this all may be a darker view of modern financial history, the record global debt we have today was mostly passed down from event to event, setting up a situation today with the true lenders of last resort, are now only governments or perhaps even the ongoing IMF SDR push.

Writing for the Financial Times in February of 2018, the former head of research for the central bank of central banks (the BIS), William White stated the common sense perspective that, "Governments and international forums need to revisit bankruptcy procedures. Debt that cannot be serviced will not be serviced."

What Mr. White failed to mention in his somewhat recent op-ed article was that the BIS' FSB has been writing and enacting new global bank and globally important financial institution bankrupcty laws for years now.

Far few people banking in supposed first world nations fully understand the existence nor the potential implications of current Bank Bail-in Laws and other financial emergency provisions which have been enacted in recent years.

Various financial spillover lock down laws have been put into place since the last great recession in 2008 thoughout the G20 nations (yes the USA is part of the G20).

Of course most of this current record global debt level has been spurred on by Chinese infrastruture spending. While some of the investments made in projects like the Belt and Road Intiative, etc. may have long term residual benefits, naive to think she won't default on many of her citizens through non-performing loans and a cheapening yuan in the years to come.

Unintended consequences of allowing record debt levels are here and likely to become more obvious ahead.

Yet the average person has little clue about gold's history, much less how currency creation even works today, yet most spend a good portion of their lives chasing after capital accumulation.

Here again is the aforementioned William White, back in September of 2017 further explaining the current situation we find ourselves in.

What are the potential psychological and mark to market affects when increasingly everyone wants their money back at the same time, yet again?

Who gets defaulted on and how?

Which debts get debased and inflated away through currency debasement?

Which debts default fast, and get written down as losses right away?

What will gold, silver, and physcial bullion values do in the 2020s?

Is there an economic spring in the 2030s following this economic winter monetary authorities seem determined to prolong?

Perhaps wise to take heed of those wealthiest families who have seen virtually every financial environment of the past.

Thriving through long term ups and downs, somehow preserving and passing on real wealth intergenerationally, throughout them all.

Own things that last and preserve their purchasing power throughout your life and beyond the lives of your heirs.