No matter in what complex jargon IMF SDRs are claimed to be or claimed to have become, see how they have performed vs bullion since their late 1960s inception. 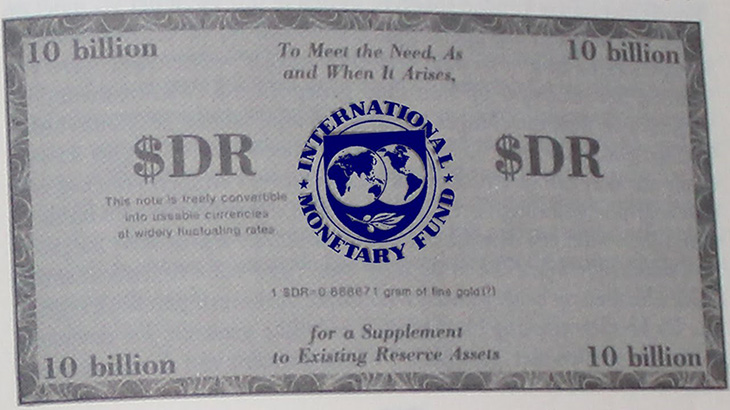 To millions of critics around the world today, some of the most terrifying words uttered in 20th and early 21st Century have been, “I'm from the IMF and I'm here to help.”

Many would argue the IMF is used during financial crisis as a privatization fire sale arm for the banking elite enriching a small minority at the expense of the majority. Ask various citizens who lived through financial crisis in Mexico, Russia, Indonesia, Thailand, Argentina, Ireland, and Greece their opinion of the IMF. Prepare to hear many gruff responses.

The IMF (International Monetary Fund) is actively and explicitly preparing for a future global monetary order where the US dollar plays a lesser role than it does today via their Special Drawing Rights (SDR) system.

Will they get it?

That is not the point of this discussion, we want to see their track record vs bullion.

Know that both current and former IMF officials openly discuss the necessary crisis required to ‘propel’ the IMF’s SDR system and ‘catapult it’ into its future ‘destined role’.

What is an IMF SDR?

Special Drawing Rights (SDR) - (n) the Special Drawing Right (SDR) is an international reserve asset, created by the IMF in 1969 to supplement its member countries’ official reserves. As of September 2017, 204.2 billion SDRs (equivalent to about $291 billion) had been created and allocated to members. SDRs can be exchanged for freely usable fiat currencies. The value of the SDR is based on a mixed basket of 5 major fiat currencies: the US dollar (41.73%), the euro (30.93%), the Chinese renminbi (RMB) or yuan (10.92%), the Japanese yen (8.33%), and the British pound sterling (8.09%).

The IMF recently added the Chinese yuan renminbi currency into the IMF’s SDR basket of fiat currencies in October 2016. The current head of the IMF, Christine Lagarde, openly speaks about the future IMF headquarters being based in Beijing, China by 2027. Doing so would be in compliance with their charter, basing their headquarters out of the world’s largest economy.

At present, the IMF SDR is merely a composite of 5 fiat currencies (US dollars, euros, yen, pounds, and yuan). This may change, as admitted by IMF officials. It may become necessary to add some form of gold or commodity composite backing to IMF SDRs in order to add credibility and possible global inclusion of SDRs as the world’s next reserve supranational currency.

Any supposed commodity backings for IMF SDRs will become as reliably rigged as the latest U.S. Bureau of Labor Statistics have become. The IMF’s action, like virtually any other central bank today will prove inflationary and insider benefiting over time.

The future of the IMF SDR, its global inclusion, long term future performance, and potential gold or other commodity index backings are all still unknown variables at play currently.

What is fully trackable and measurable though is the performance of IMF SDRs vs gold bullion and vs silver bullion since its 1969 formation and its subsequent 1973 decoupling from gold.

The value of the original SDR was initially defined as equivalent to 0.888671 grams of fine gold, which at the time was also equivalent to $1 US dollar.

After the final collapse of the Bretton Woods system with then President Nixon closing the gold window in August 1971, the IMF SDR was redefined as a basket of fiat currencies in 1973.

How has the IMF SDR performed vs gold bullion since? 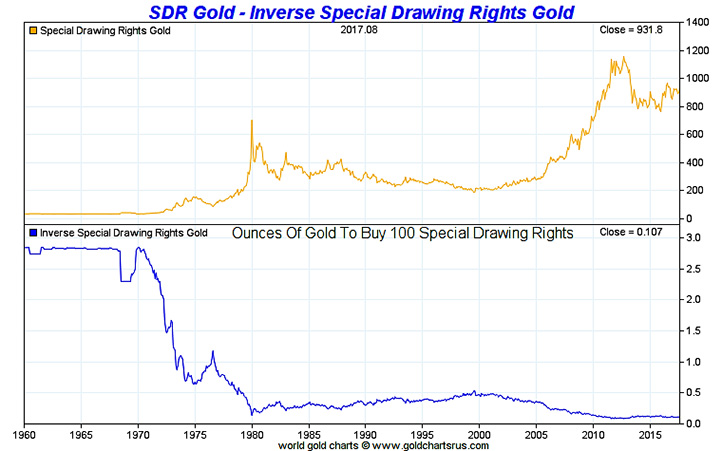 Remember in a likely financial crisis to come, the bottom line on IMF SDRs is simply this.

No matter how technocrats or the mass media choose to dress up SDRs in convoluted financial speak, as of now it is just another fiat currency derivative. The SDR’s performance versus silver and gold bullion values over the last near 50 years, simply speaks for its near half century track record.