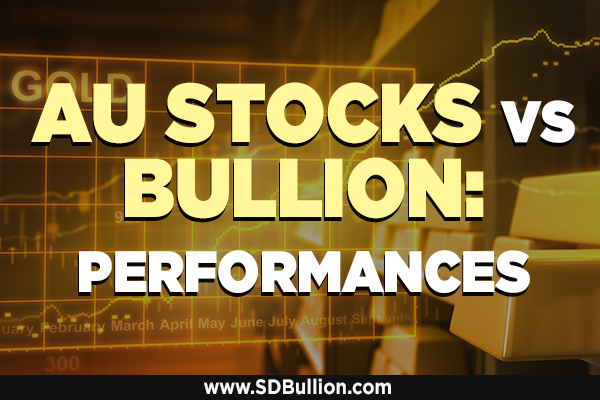 Of course and in general, there is a positive mirroring relationship and price correlation between gold bullion and gold mining stocks. The close relationship between the gold price and the companies that mine gold may be stronger in the short-run than in the long-run because gold mine producers are often affected by many other factors than merely the price of the yellow metal (we mentioned many in the prior section on gold mining stock risks).

In this section we are going to host and embed various price charts which convey large amounts of price data over large swaths of time. By doing so we hope to illustrate how gold mining stocks and their respective indexes have performed vs gold bullion prices over long spans of time.

Know too, any gold mining indexes we choose to highlight in the remained of this piece are similar to the Dow or DJIA in that they are constantly rotating and cherry picking the gold mining stocks in which they track. Like the DJIA, by doing this arbitrary stock component rotation, it helps mask ongoing bankruptcies, takeovers, and or other gold mining company price failures over long stretches of time.

Unlike bullion, these indexes have and will track gold mining stock failure to come. 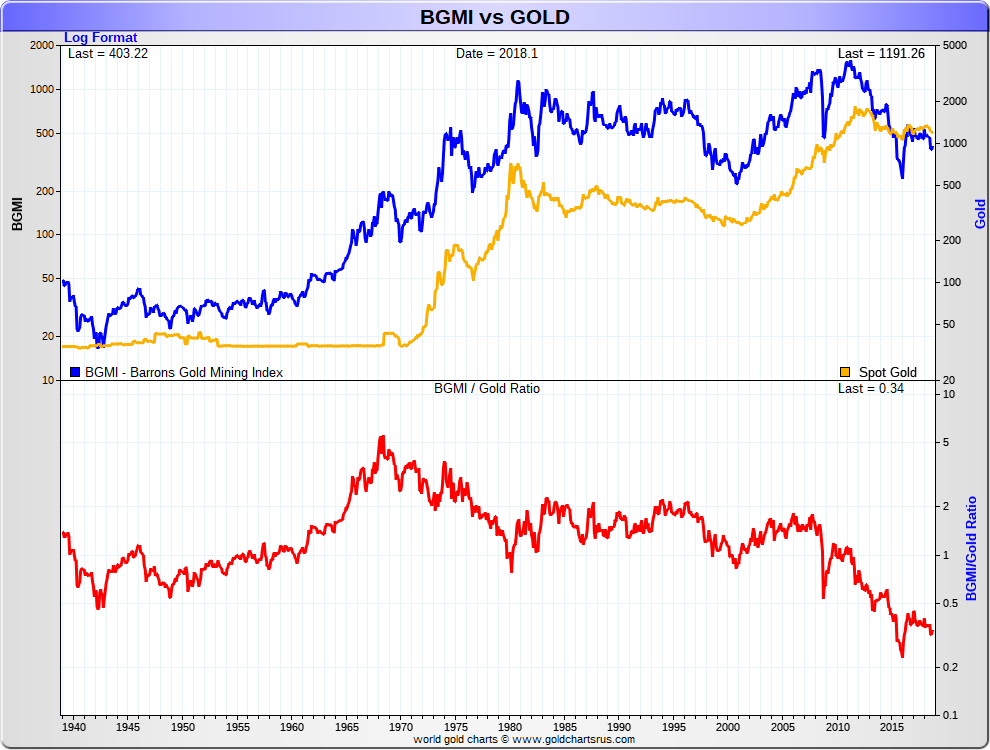 Above are the moment’s 7 componite gold mining share inputs for the BGMI.

Of course this current list has not always been the same since 1940. But compared to the HUI and XAU, the BGMI is the longest running and likely least rotated of the 3 gold mining indexes we will highlight here.

Now let us look in further detail with how physical gold has performed versus various gold mining shares and other indexes throughout 3 specific gold bull markets vs the US dollar to date.

Often when a case is made for gold’s performance during an economic depression and bankruptcy writedown era, gold stock investors will point back to the performance of Homestake Gold Mining as an example of outperformance versus gold bullion values (see chart below).

Indeed the gold bullion price exploded higher in early 1934, as the US government in 1933 outlawed private ownership of then no more than 5 oz per US citizen. Fresh off a sweeping gold confiscation in which the vast majority of populace did not comply, the US government proceeded to devalue the US dollar to gold by some 70%.

The US government arbitrarily set a new gold price in early 1934 that raised the long standing gold price of $20.67 oz to some $35.00 oz overnight in US dollar terms.

Many still today would argue that $35 oz USD price at the time was too low and thus the deflation continued for some time to follow up and until the WW2 effort began in earnest.

Even above average nerds on Jeopardy, don’t know these simple facts about gold.

Left hand side (LHS) of the chart shows the then US dollar price per ounce of gold. Note the gold revaluation higher from $20.67 to $35 oz USD in early 1934.

The green line shows Homestake Mining (HM) which performed extremely well throughout the era with a near 10 multiple in value over the chart’s timeframe, while also paying hefty stock dividends to HM shareholders (note that most gold mining stocks today, do not pay dividends at all).

Of course this was all done during an era in which gold bullion was the supposed basis of the US dollar’s then gold backed value.

It was not until the post 1971 Nixon era that the gold price was fully severed a few years after the multi-decade London Gold Pool price fixing failure.

Within a decade’s time gold bullion multiplied more than 20Xs in US dollar price terms (i.e. by late January 1980 gold hit its then all time price high near $850 oz USD).

The following chart reflects gold bullion vs some of the most popular and best performing gold mining shares at the time. Their respective price performances are reflected on the following chart in percentage terms.

As you can see the yellow line reflects the gold bullion price in percentage moves higher as it outperformed almost all major well performing gold mines at the time. The only exception was again Homestake Mining which was the only gold mining stock to outperform bullion on the chart both during gold bullion price climb, peak, and subsequent fall.

It was not until later in 1980, that the other major gold mining stocks on the chart actually outperformed the gold bullion price appreciation of 1980.

Of course, at the time there were various other gold mining companies that vastly underperformed gold bullion, whilst there were also many minor gold mining stocks who did better than illustrated on the chart..

Here is but one example of the point just made. 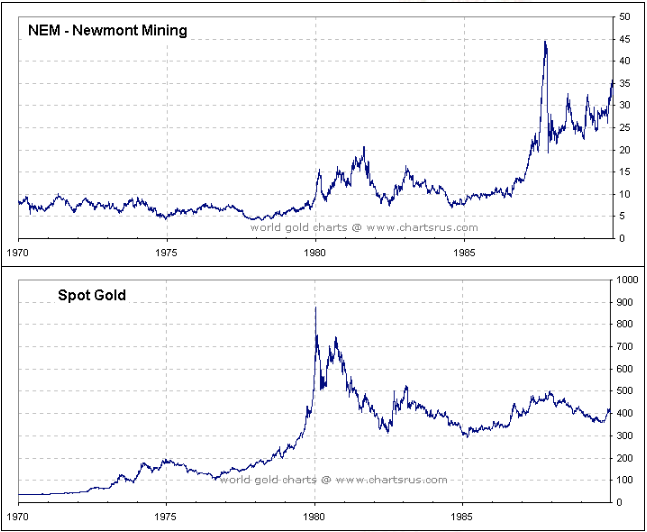 Yet also note that since the late 1980s, Newmont Mining Corp has basically floundered sideways in value while yielding slim dividends over recent years.

In other words you would have been much better off buying bullion circa the year 2000 than buying into Newmont mining shares.

Since the all time nominal price high of gold in 2011, bullion has held its value better than any of the major gold indexes we are about to highlight here.

Take a look for yourself: 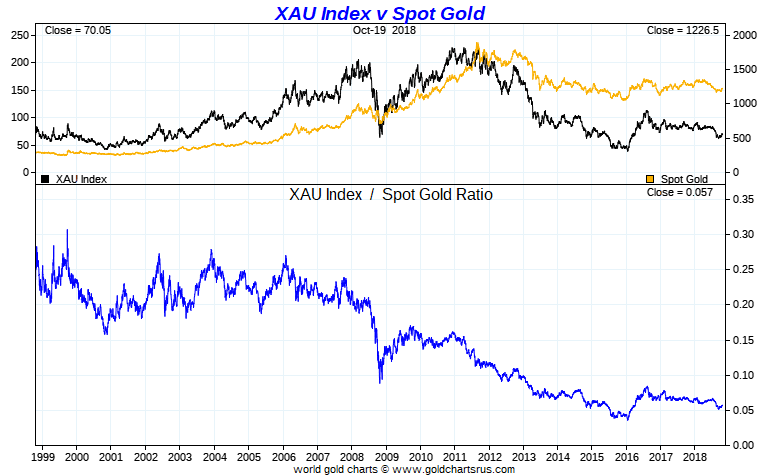 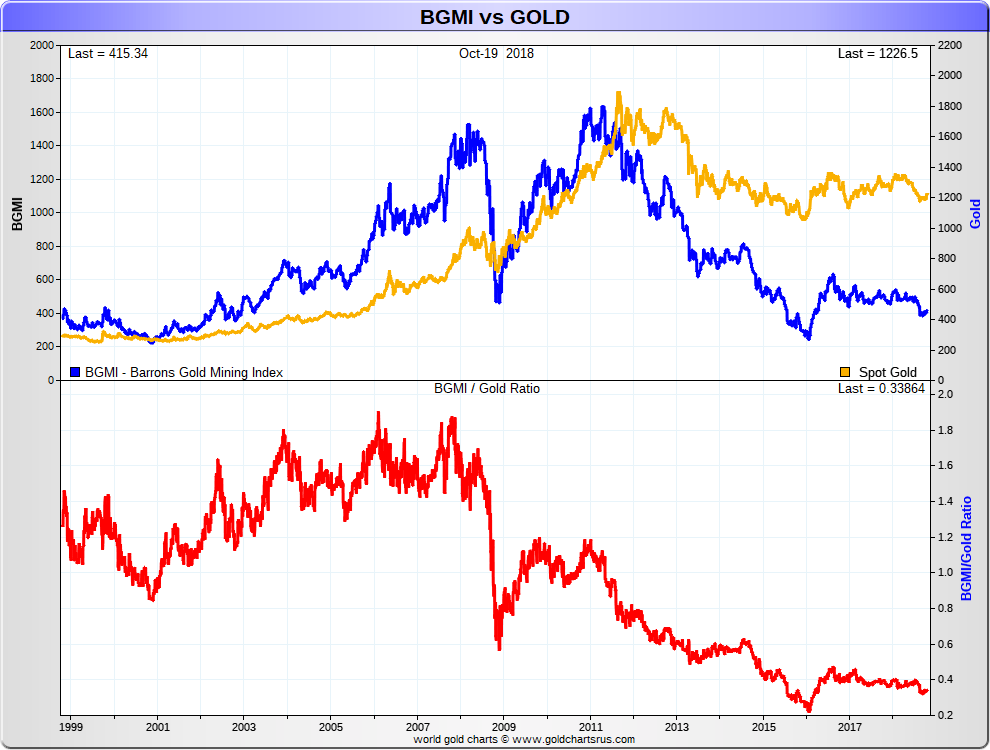 In summation for the entire 21st Century, gold bullion has been better than the most followed gold mining stock indexes to investor portfolios.

If so how, and when might the reversion take place?

Those are answers only God or universal omniscience likely knows at the moment.

When considering the asymmetric risk and reward of overall gold mining share indexes in the 21st Century, the obvious winner has been gold bullion broadly speaking.

In total summation, expertly selected gold mining stocks could possibly make up a small but yet possible outperforming portion of a sophisticated investor’s equity portfolio.

However, hard facts over the long term reflect that gold mining shares are not a prudent long-term strategic investment for most individuals reading this piece.

Physical gold bullion has a long history and a near 6,000 years of proven lasting value. In our opinion, prudent gold bullion allocations should make up a portion of every person’s assets.

The downside of gold bullion values versus its potential upside in the coming decade make the trade of some capital for gold bullion a rather easy one for us, especially when all contributing gold value factors are considered.

There is good proven reason that many of the world’s wealthiest families have always held gold bullion to protect their wealth and estates over long spans of time.

Globally, the financial problems we face as a collective species are nearing another crescendo.

In the coming years, we believe investment portfolios without physical gold to offset losses in both financial assets and fiat currencies will suffer in value. Especially versus those who had the wisdom to position themselves prudently with some gold bullion allocations especially at today’s late 2018 historic gold price levels.

Place your bets wisely, and favor the ones you can physically hold in your hands long term.