President Trump today called for the Federal Reserve to drop interest rates to zero and beyond into negative interest rate policy levels.

Some onlookers might be shocked to see this strong suggestion by the USA's commander and chief.

The Federal Reserve should get our interest rates down to ZERO, or less, and we should then start to refinance our debt. INTEREST COST COULD BE BROUGHT WAY DOWN, while at the same time substantially lengthening the term. We have the great currency, power, and balance sheet.....

....The USA should always be paying the the lowest rate. No Inflation! It is only the naïveté of Jay Powell and the Federal Reserve that doesn’t allow us to do what other countries are already doing. A once in a lifetime opportunity that we are missing because of “Boneheads.”

But what is way more shocking to learn, is that we have been living under negative real interest rate policies since the late 1990s in the United States (although not nominally of course, yet).

In the most crucial gauge, for how your purchasing power is doing. We must be conscious of real interest rates by using more accurate 1980 fiat US dollar inflation metrics.

Why else mainly is the fiat US dollar price of gold now up nominally about 6Xs since we went real NIRP late 1990s?

Today's admission from the POTUS, of our intended, further leaning to NIRP (likely before an inevitable financial structural reset gets undertaken) is just further fuel added to bullion's mania phase in value ahead.

The historic gold value and the future price of gold get negatively correlated with positive real interest rates.

Conversely, we historically see a rising value for gold vs. interest rates that are well below the real rate of inflation. That is the world we US citizens, and most western nation inhabitants have been living in now for about 20 years.

Given that some now $250 trillion in global record debt levels currently, without a significant financial structural system reset, we are unlikely to again see positive real interest rates for decades to come.

There is now over $17 trillion in negative-yielding interest rate bonds across the globe (most located in the EU and Japan).

There is now a genuine possibility we will not only see negative interest rate policies here in the USA in the coming decade.

How does Gold do under NIRP?

Exceptionally well, and it has already proven to have done so for over the last two decades.

First and foremost, currency today is so divorced from value and in such massive supply that we are reinventing interest rate policies. Negative interest rates have not happened in over 5,000 years, and that is about the same amount of time human beings have been going to gold to maintain their savings and wealth.

NIRP is bullish for both the future and current price of gold (and other bullion products for that matter such as silver, palladium, platinum). Negative real interest rates are the best environment for gold bull markets.

The ugly truth of the matter is that although we have not had nominal negative interest rate policies here in the USA yet. We have had real NIRP for decades now, as we consistently lie to ourselves about the actual inflation rate. If we used the 1980 method, a much more accurate methodology of measuring fiat US dollar inflation, we would realize that we have needed almost to make +10% on our investments annually to beat price inflation over the last two decades.

Real NIRP has been in the USA since the Mid-1990s 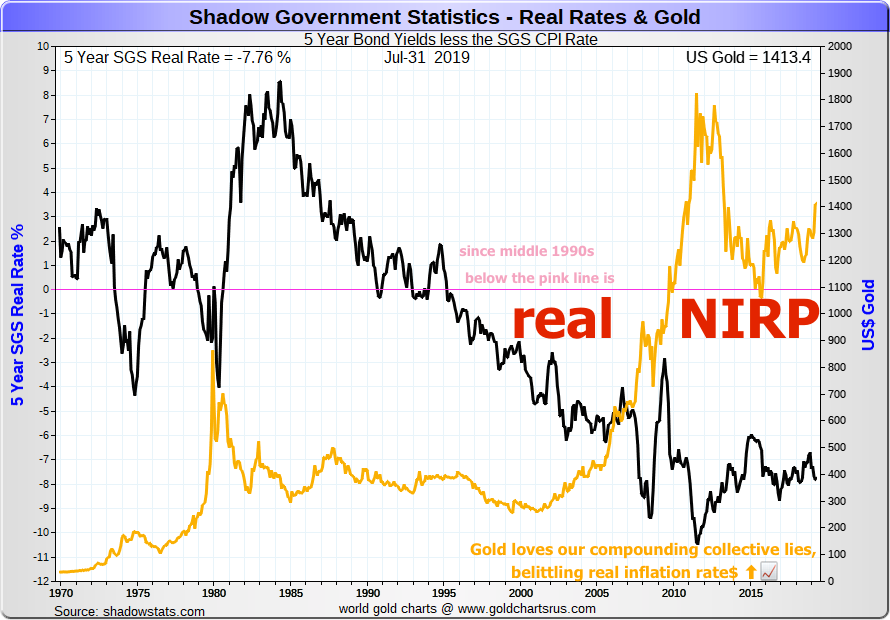 Now being implemented beyond not only a real but also on a nominal basis, NIRP is detrimental to society at large.

Full implementation of NIRP would only work in a cashless society. It would also make politicians and central bankers think about further laws contributing to the abandoning of physical cash notes.

All this increases the safe-haven demand for the best bullion products to buy. Gold, silver, platinum, and palladium have and should continue to be very sound, private alternative places to park money. Especially in an economy with lessoning cash privacy, further tracking of capital flows, and the centralized control consolidation dream of state-created and managed digital cryptocurrencies.

More NIRP policies in the world are very bullish signals for gold. In real terms, this has been the case for gold prices since the turn of the century. This is because the cost of the precious yellow metal is negatively correlated with real interest rates, the level of confidence in major central banks, and many of the seemingly unplayable global debt levels we have yet to write down and honestly default on.

Until a structural reset gets finally undertaken, twisted financial policies such as NIRP not only show us how perverse the financial system has become.

But NIRP is also helping to begin bullion’s mania phase to come as confidence in fiat currency gets further lost and debased predictably as it always does in its endgame historically.

To get a full perspective of how perverse and compounding-ly confusing nearly four decades of real inflation rate lies has twisted silver nominal price highs looking backward. Have a look at all-time silver price highs.

As we reach further into realms of unknown financial policies, it is common mathematical sense to have a prudent bullion investment allocation now.

To learn best practices on how to buy bullion and sell bullion, be sure to pick up our free SD Bullion Guide.