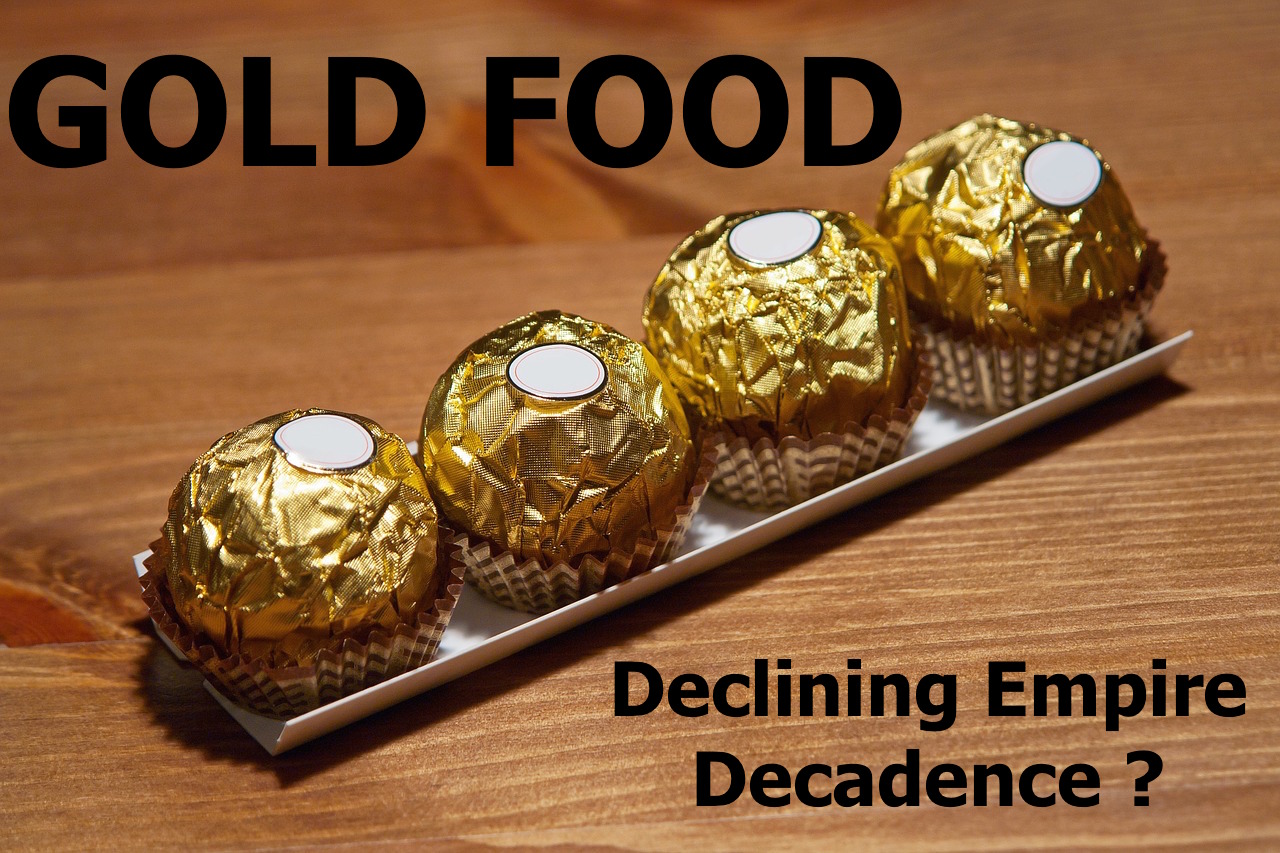 We humans can and do eat gold, and we even have trace amounts of gold pumping through our blood systems.

In other words, gold is an inert precious metal which we can consume without toxicity. But given the rising price of gold these days, eating best selling gold bullion products for dinner is perhaps a few troy ounces too far.

Since this monetary metal is so malleable, it can get hammered in thin sheets of only about 1/2 of a micron thick (i.e., about 120Xs less wide than even a human hair).

As one of the ultimate public displays of wealth, gold in thin leaf form is often used by various religions to cover houses of worship or cherished religious artifacts.

Here we cover some the current silly scene of eating gold leaf-covered foods.

The 2013 documentary film, Four Horsemen, dedicated a section of its film to the rise of celebrity chefs during historical empire endings. Every empire decline has a generally similar way in which an overextended nation-state eventually entropies, and ultimately falls back into line with its real contribution to the world.

If you study the fall of the Roman, Spanish, or the Ottoman empires, you will find each respectively made celebrities of their food chefs.

The following documentary interviews monetary historian like David Morgan of the Morgan Report.

“And this again is typifying the end of an empire. Where things were so great, we have this last oomph of momentum that we used to be great, and we felt great, and we don’t feel it anymore. So everyone is out searching for it. Well, maybe it’s in the best food, or the best clothes, or the best music, or the best movies, or a reality TV show, or another magazine. But you can never get enough of what you don’t need. What you need is a strong moral conviction that is pervasive throughout the society and integrity reigns.” - David Morgan

The use of gold foods in showing off a new restaurant has become a predictable trend that is as old as the decline of the empire itself.

The following is not only overpriced but also somewhat foreseeable.

To bring us back to reality.

You don't need a calculator to realize who the mark is at this decadent gold food game.

It is not only gold sheets which get used in very expensively priced food dishes.

There are also silver leaf sheets used in the process of overcharging people for food.

Below you can find a short clip to see the intensive effort required to make such think leaf sheets with precious metals like silver and gold.

To learn more about precious physical metals and best practices when buying bullion or selling bullion.

Be sure to pick up our free SD Bullion Guide before you go.