Chinese Gold Futures | What is COMEX & US Treasury up to?

It is important for both seasoned and new gold bullion buyers alike to note what is happening underneath the price they gleam for gold bullion on a daily basis.

Fresh off the news that the Hong Kong Stock Exchange (i.e., now Chinese interests) made a new $37 billion fiat US dollar failed bid for the London Stock Exchange.

Both of these two new Chinese gold futures contracts on the COMEX will get based on the SGE Shanghai Gold Benchmark p.m. price.

If we are in a real trade war with China, why would we allow them further access to our most critical commodity and precious metal price discovery markets?

With the CME Group still actively incentivizing foreign central banks and foreign financial institutions to openly trade in our critical price discovery markets, will the PBOC be getting some discounts and in which commodity markets might they be pushing price discovery around?

Shanghai Gold Futures Contract | What is COMEX, by proxy, the US Treasury doing?

China is by far the world’s largest gold user. Been that way for some time now.

The Chinese dominate as the most significant combined gold miner and importer of gold bullion and have done so for almost a decade.

Following the 2008 Financial Crisis, the amount of gold bullion which has been mined and imported into China is well over what the USA supposedly claims to have in its Official US Gold Reserves.

These facts make Shanghai, China the most significant physical gold market for not only the Asian gold market (India being a massive consistent gold bullion buyer too).

It makes China the world’s largest physical gold trader for perhaps the rest of the 21st Century.

For western gold derivative markets, if you can’t beat them, perhaps somehow join them.

In time, maybe you can better marginalize higher eastern gold bullion premiums and potentially further slow down the flow of gold bullion from the west to the east.

Perhaps you could even collude to control gold price revaluations higher to come? 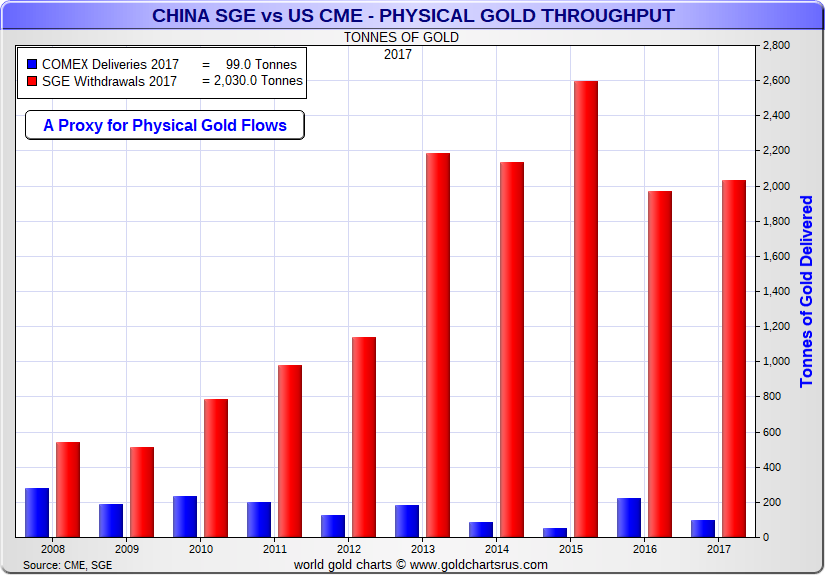 Almost all the gold bullion flowing into China since 1980, is prohibited from leaving by law.

Estimates of how much physical gold bullion China has exceeds 30,000 tonnes within a law body that essentially says the state owns all gold bullion, push come to shove.

Historically, one of the biggest gold robberies happened on Chinese soil in 1937. Perhaps we are not too far from seeing another in the land that invented both gold bullion bars, fiat currencies, and now seems to be moving fastest to a cashless top-down police state.

It is not outside of the realm of possibilities to perhaps one day see China repeat a US 1933 gold confiscation action in the name of economic betterment for all Chinese citizens.

After all, we did that in the supposed Constitutional USA. To this very day, we use the 1934 Gold Reserve Act language as the legal pretext to rig any financial markets, anywhere.

As this Chinese gold price benchmark attracts more interest from investors around the world, the new Shanghai benchmark-based futures contracts could serve as a way to harmonize east vs. west gold price discovery.

Perhaps by working more together, both nations could lessen chances for future embarrassments like the London Gold Fix manipulation scandal that rocked the gold world in the 2010s. 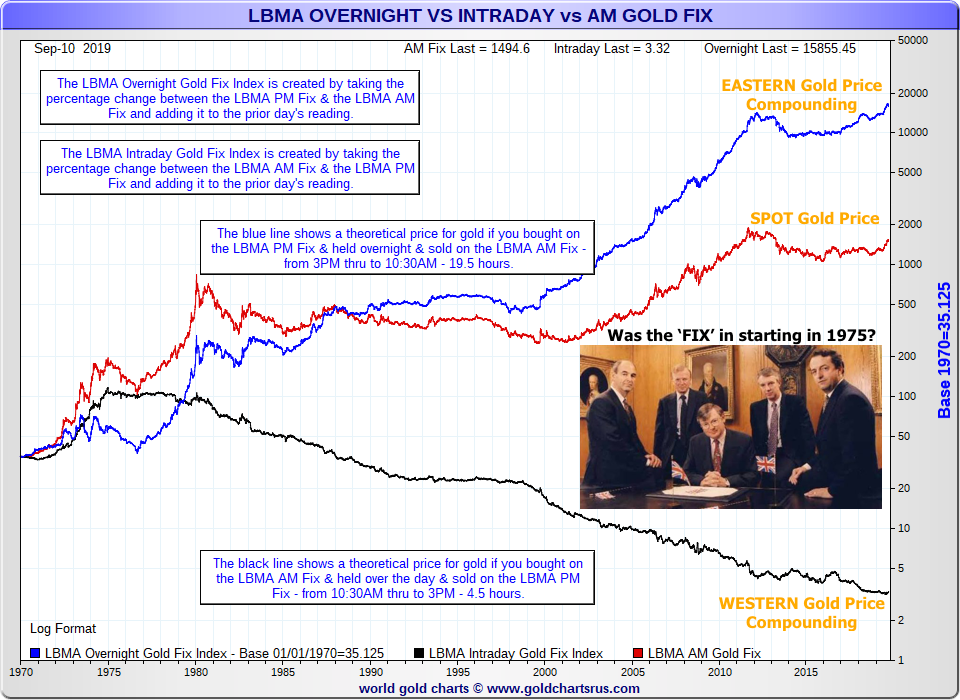 Any gold bullion buyer who has done proper research.

None would likely be naive enough to think London, and US financial interests would not coordinate together in reaching objectives which are obviously in both their specific longterm interest (e.g., 1974 US Treasury cables to deter US citizens buying gold bullion, keep them in fiat US dollars and paper investments).

The London/US gold price volatility interests from the middle 1970s ultimately failed spectacularly by early 1980, much like the preceding price rigging London Gold Pool failure before them.

They all were perhaps only outdone by the opaque London Bullion Market Association's mid-1980s entry into the gold 'price discovery' game.

Note in the following video, how with gold prices in 1987, the eastern gold price (blue line^) completely decoupled from the other spot gold price (in red^) and the (black colored^) western led prices for gold.

The eastern led gold price throughout this full fiat currency era requires an addition ‘0’ added to its fiat US dollar per troy ounce price.

Which gold price are we to believe is closer to fair market value for gold bullion?

Or how about the paltry 1970-2019 London-western led gold price? Currently driven to $3.32 oz gold in almost 50 year's of time in which even the spot fiat US dollar gold price has multiplied some 40Xs.

Or maybe some future derivative-driven amalgamation of the two gold bullion pricing markets to come?

How does this east vs. west data look in terms of silver? Perhaps when selling silver in some chunks may make profitable sense, at many price multiples higher than today.

Below we let the CME Group COMEX marketing team try and sell you on this new derivative product for western paper gold derivative lovers.

Ultimately the inevitable rise in gold bullion values is likely both in the long term interest of the United States and China.

Both nation-states for varying reasons will want their respective fiat gold prices to rise substantially in the coming decades (i.e., fiat $USD and ¥uan gold prices).

By doing so in a controlled, coordinated manner, it should allow both nations to predictably move into aggressively debasing their record debt levels and thus fiat currency issuances achieved to date.

Much higher gold and eventually commodity prices will also debase in real terms both explicit and implicit unfunded promises made to melder generations in each country (e.g., Baby Boomers, and an over-abundance of Chinese elders growing older due to decades of 1-child policies).

As we head further towards a more multi-polar financial powered world, not solely dominated by the USA and it's still dominating fiat US dollar reserve currency status. One in which trade distribution skews more in favor, towards lawful underdeveloped places, with high ambition and infrastructure initiatives ongoing.

Do not be deceived by algorithmic stock market-pumping trade war headlines coming out of the White House as they hope to remain in office in the early 2020s to come.

Longer-term interests of China and the USA, have and would again coordinate together in reaching objectives which are obviously in both their explicit interests longer than our respective political cycles.

The motive is there to further debase our respective currencies and debt-driven promise piles, with a controlled melt-up of the gold price ahead. Gold values are going to rise.

The question is how, and under whose control, respectively?

Learn about backtested prudent gold bullion investment allocation data. Why is owning bullion is a must moving ahead?

For both buy bullion and sell bullion best-practices, pick up our free SD Bullion Guide by email right now.