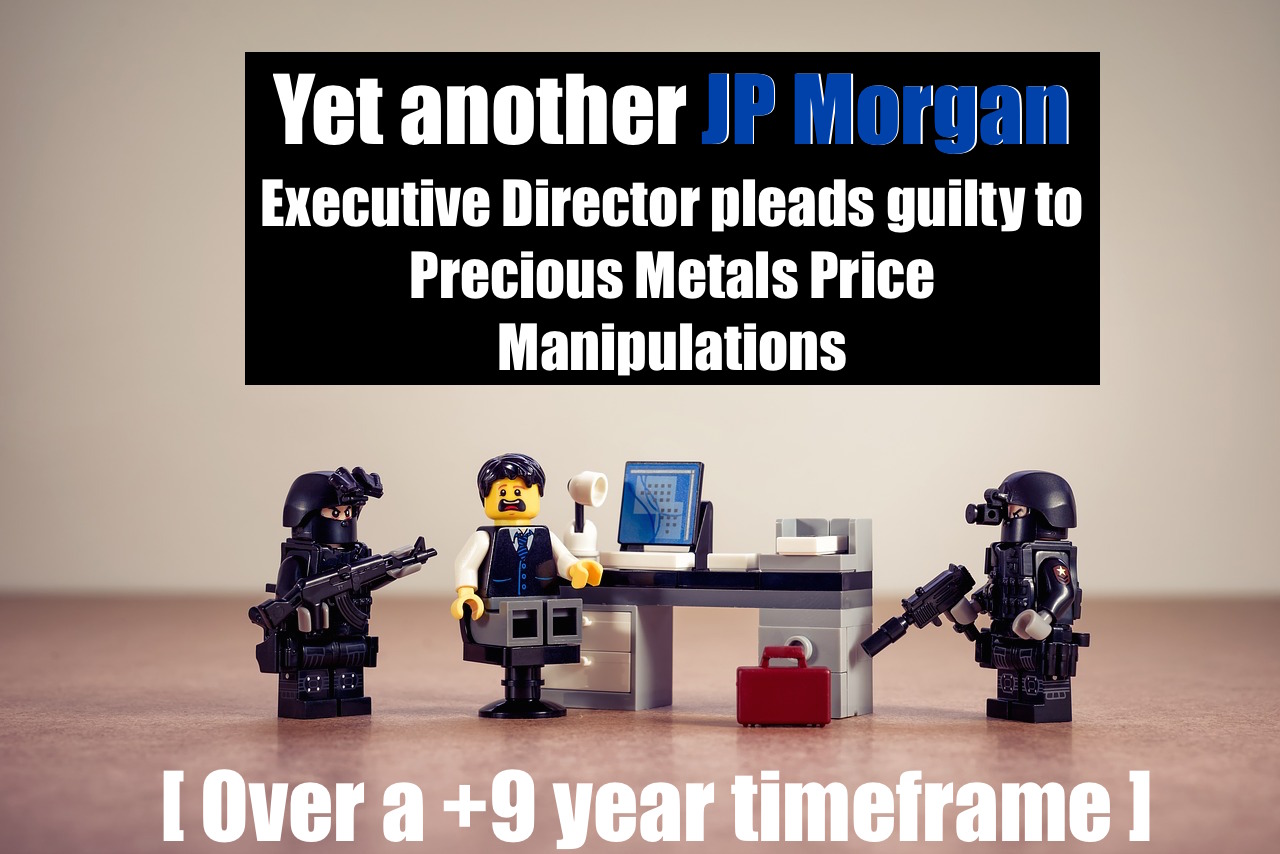 Virtually anyone who pays attention to the silver bullion market knows by now that JP Morgan's Silver Comex warehouse has the most significant modern silver bullion hoard ever amassed.

Larger than either the 1980 Hunt Brothers and or late 1990s Warren Buffet silver hoard via his Berkshire Hathaway holding company.

We learned yesterday that the US Department of Justice busted another long-time former JPMorgan Chase precious metals trader. A 34-year-old man who admitted guilt to financial criminal charges of spoofing precious metals derivatives contracts traded on the COMEX and NYMEX.

Late last year we got a long-time JP Morgan silver price rigging declarant, Ted Butler on the phone to hear his thoughts on the matter in late 2018.

JP Morgan said in a 2019 February regulatory filing that it was co-operating with the US Justice Department’s ongoing investigation into precious metals trading frauds.

It was at yesterday’s plea that Mr. Christian Trunz resigned as an executive director at JPMorgan where he acted for over 9-years as both an employee and precious metals trader at JP Morgan's London, Singapore, and New York offices. 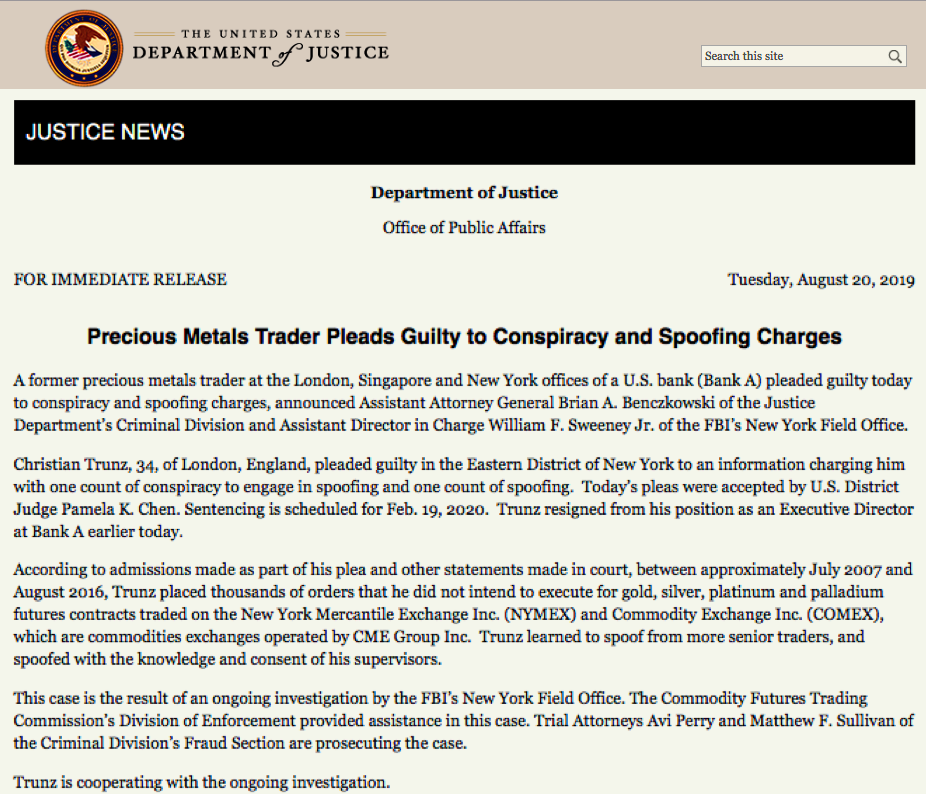 The US Department of Justice accepted the admission that Trunz placed thousands of pretending orders for silver, gold, and other precious metals futures contracts which he did not intend to execute (2007-2016).

Coincidentally Trunz's timespan at JP Morgan also covered a span in time in which JP Morgan was alleged to have been naked short selling silver derivative contracts in late 2010 silver trading.

By using false price signals, derivative traders in precious metals can gain profits by creating market moves in price to both his and JP Morgan’s advantage. Trunz will get sentenced February 2020, and there is no word yet on how much his ill-gotten gains will have to be forfeited either.

"Trunz learned to spoof from more senior traders, and spoofed with the knowledge and consent of his supervisors," said the Justice Department. The US Justice Department also noted that Trunz was co-operating with their ongoing investigation in further precious metals related frauds.

Faces 11.25 yrs in prison for #PreciousMetals price manipulations for +9 yrs, working at #JPMorgan

“Trunz learned to spoof from more senior traders, and spoofed with the knowledge and consent of his supervisors,” said the US Justice Department.

Anyone with common sense knows Trunz’s nine-year front running and financial lawbreaking was unlikely a solo act. More likely he was a mere symptom or fall guy for wider systematic financial criminality then and possibly ongoing.

We should expect more former and potentially current JPMorgan and other associated commercial banks' precious metal traders and directors to end up in prison ( e.g., this recent bust of a former Bear Stearns and Scotia Mocatta precious metals trader ).

This case involving a former JP Morgan executive director is the latest in a series of prosecutions brought by U.S. authorities who have arguably cracked down on fraud in the precious metals derivatives markets too late (public confidence has gotten permanently damaged). Notably, in this case, prosecuted was the act of spoofing.

Here is an example of how large some fiat US dollar bonus could get using such illegal tactics.

Waterfall spot price declines in silver and gold spot prices had little basis in the physical fundamental supply and demand markets. They were familiar sights in silver 2011, gold 2012, and silver 2013 especially.

Massive stop-loss triggering trades often cause declines in precious metal spot prices. Such is a symptom or result in having such a highly leveraged fractional-reserve futures exchanges and high-frequency trading dictating the prices of physical bullion in the real world.

Greed alone is an apparent motive for these ongoing decade or more running financial crimes in precious metals derivatives.

Now, the bigger question in our minds is not if greedy traders were rigging precious metal prices year after year. Such small fry is now an undeniable pervasive fact.

Moreso, we wonder the following.

Why is the COMEX and NYMEX running CME Group incentivizing foreign central banks to actively trade in our price discovery critical commodity and financial derivatives markets?

What could be the motive(s) for allowing foreign government's fiat currency custodians to both buy or sell derivatives? Ones that can dominantly set the prices for many real-world goods and services we use on a daily basis.

Stay tuned; we expect there will likely be more fires from where this smoke continues to bellow out thicker.