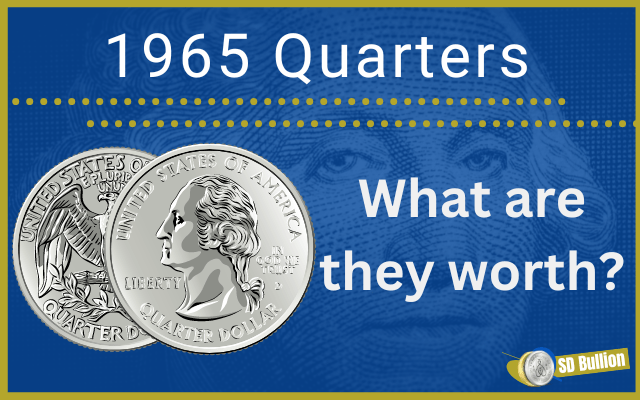 In 1965, the United States Congress decided to eliminate silver from circulating dimes and quarters. From that point on, those denominations were released in copper-nickel-clad coins.

However, some leftover silver planchets ended up in the pressing machines and were released into circulation. The exact number of these rare coins is unknown, but they make for some of the most valuable quarters and desired specimens by numismatics and advanced collectors.

This article will explain how these rare quarters came to be, how they are intrinsically related to the history of the United States economy, and analyze what a 1965 quarter worth is, including all its variations. 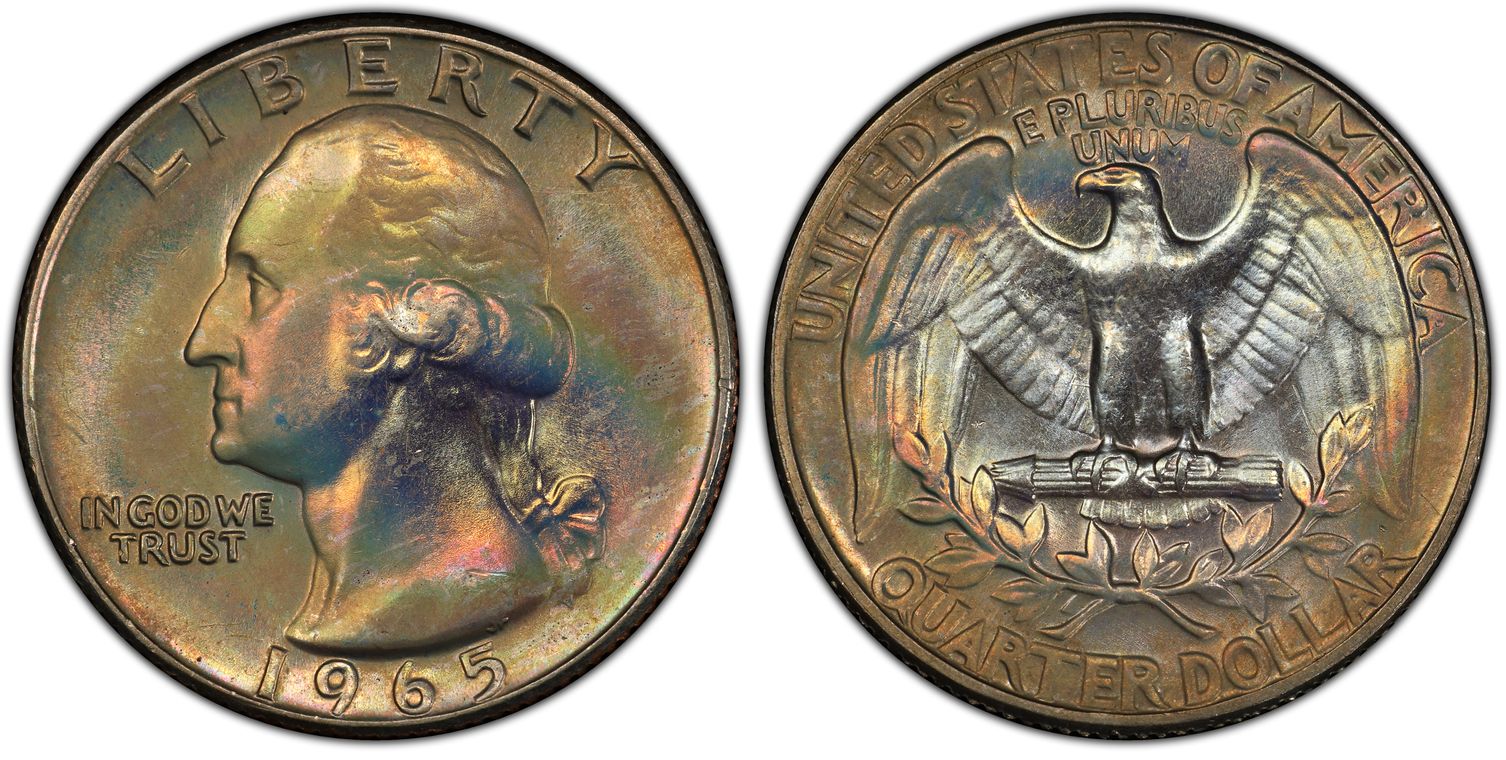 John Flanagan was the artist responsible for designing the Washington quarter coins. The obverse features a bust of George Washington facing left, with the inscription "Liberty" above, the mint year below, and the motto "IN GOD WE TRUST" right under the president's chin.

The reverse depicts a bald eagle perched on a branch with laurels below. The motto "E PLURIBUS UNUM" appears above the bird, and the inscriptions "UNITED STATES OF AMERICA" and "QUARTER DOLLAR" are on the outer rim.

Most coins made at the United States Mint get a mint mark—a letter code that shows which branch struck the coin. Philadelphia mint doesn't always use a mark because it was the first branch. And no effects were used from 1965 through 1967. But today, most coins except Philadelphia's have mint marks on the back.

Until 1960, the US still produced silver coins for circulation, including silver dimes, silver quarters, silver half-dollars, and silver dollars. But supply far outstripped demand, and the government limited the use of silver in coin production because the precious metal was becoming too valuable.

In the early 1960s, silver prices were pushed up by an economic expansion, and people started hoarding this precious metal in the form of dimes, quarters, and even half dollars.

Following President Lyndon Johnson's decision, the US Mint continued coin production with other materials, including copper-nickel alloy. The Coinage Act of 1965 removed silver from the circulating United States dimes and quarter dollar coins. As a result, 1965 silver quarters and 1965 silver dimes are rare finds that could be worth a lot of money.

The clad coins were made of copper and nickel alloy. However, when a 1965 Washington quarter with a 90% silver composition was discovered, it obviously raised questions. Turns out, some leftover 1964 planchets were accidentally used. This error coin would become one of the most valuable items for coin collectors and coin dealers.

1965 silver quarters are valuable because they are transitional error coins. You can find an error-clad coin or silver Washington quarters. The last ones are the most valuable coins.

The 1965 quarter used to be stamped on 90% silver planchets until 1964. But in 1965, the US Mint started making them with no mint mark on copper-nickel clad planchets. A few coins, dimes, and half dollars were accidentally struck on 1964 silver planchets, which makes these 1965 silver quarters a mistake.

The Washington Quarter series is an excellent collection for beginners because a good hunt for an uncirculated set of Washington Quarters can be pretty challenging. Most post-1964 issues can still be found in circulation. The 1932 to 1964 set can be assembled with very high graduation from coin dealers.

What Are Transitional Error Coins?

The 1965 silver quarter is an example of a transitional error coin. It was struck on a 90% silver planchet by mistake when the US mint should have used the copper and nickel composition, according to the Coinage Act of 1965. It also removed the mint mark to prevent people from collecting while the Mint worked to meet the country’s coinage needs.

It can be pretty easy to differentiate the bright 90% silver quarter from the regular nickel coin. But for those who have difficulty discerning colors, another way of separating 1965 silver ones is by checking their rims. 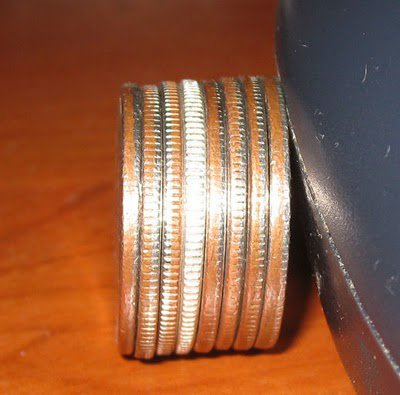 The benefits of getting your silver coins certified include verifying the coin's authenticity, its grade, and whether it has been cleaned or altered. Spending hundreds or thousands of dollars on a certified coin or having the coin professionally graded will prevent you from making expensive mistakes.

The Sheldon-scale system is the most recognized way of coin grading. It classifies the coins on a numeric scale that goes from 1 to 70. In addition, all coins graded from 60 to 70 are considered to be in Mint State, where 70 is a coin with no post-production imperfections. The higher the grade, the higher their value.

Current data shows that the regular 1965 Quarter in the circulated condition can be worth between $0.30 and $0.85. However, a 1965 Washington Quarter in mint state can be worth around $5250. But remember that this is an estimated value on a reference price. And you will always have the chance to buy for a lower price or sell for a higher one—especially uncirculated coins.

Other 1965 Quarters Worth Money

Don't lose hope if you are not lucky enough to find a 90% silver 1965 quarter. There are many other quarters worth money, even if they are circulated coins, that include wrong metal and double mints:

The Off-center 1965 Washington Quarter - this error coin is evaluated according to how off-centered the coin is in relation to the correct position. For the same coin, the higher the off-center is, the more valuable they are. It can be worth around $95. 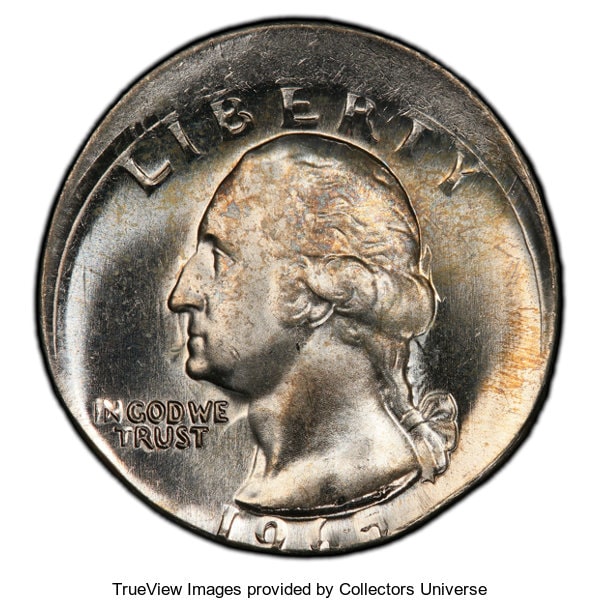 Double Tail 1965 Washington Quarter - a double coin error. It is believed that its minting error belongs to the date between 1965 and 1967. This rare coin bears the reverse design on both sides. Two of the only three copies were sold for $41,000 and $80,000. 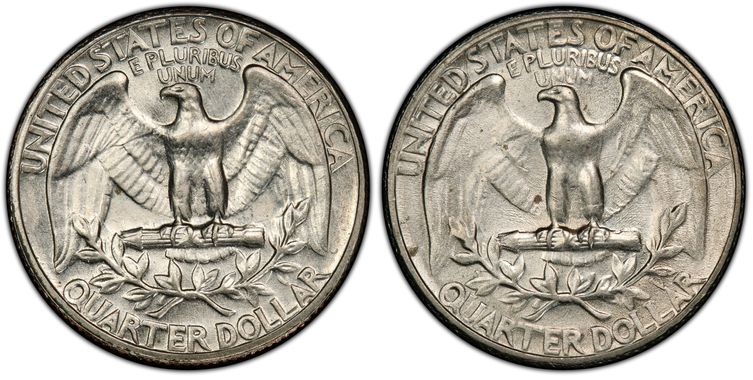 An additional fact is that the 1965 SMS (Special Mint Sets) were produced in the San Francisco mint, but the coins in the set do not have any mint mark. Not to be confused with Philadelphia-minted coins, which did not have mint marks either in this period. According to the USA Coin Book, the estimated value of the 1965-S Uncirculated Mint Set (Special Mint Sets) can be worth $13 or more in Uncirculated Mint Condition.

Also, check out our article on Bicentennial Quarters worth money.

How much silver is in a 1965 quarter?
Until 1964, all the quarters were made of 90% silver. This changed after 1965. The new clad quarters were made of a clad composition of copper and nickel. However, rare error coins containing 90% silver can still be found, and they can be worth over $5,000 if in mint state. Each silver quarter contains 0.17875 troy ounces of this precious metal.

Murilo (Mo) Menezes is an attorney and tenured English professor. His passion for economics and coinage led him to the gold and silver industry where he writes in-depth articles about collectible coins; as well as coin news and investing articles.