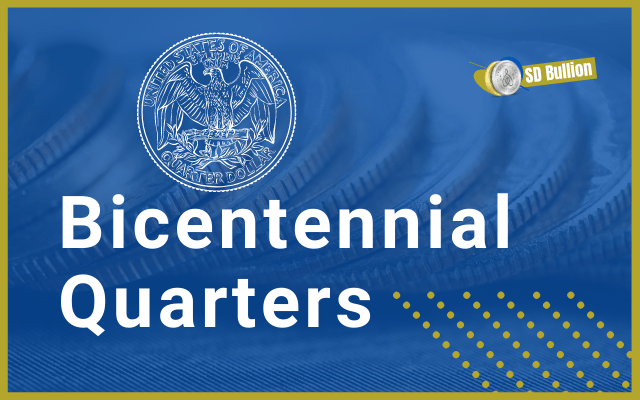 In 1976, the United States of America celebrated the 200th anniversary of the Declaration of Independence. Above all, it is a decisive step into becoming the influential and vigorous America known nowadays. Through such an adamant act, the Founding Fathers’ pride and honor was directed into creating the basis for a country to prosper and build upon.

Thereafter, important matters such as coinage were steadily attended to. Congress approved the Coinage Act of 1792, designating the U.S dollar as the country’s unit of currency. It also ensured the creation of a national mint in Philadelphia, leading to the production of America’s beloved coins. In 1796, the now-U.S Mint introduced the famous quarter or 25-cent coin.

With examples struck in four different centuries, quarters can be of great interest to coin collectors. In particular, commemorative versions such as the bicentennial quarter. The issue of celebrating America’s independence can be considered by some a modern classic, being present in many people’s lives. Due to factors like their symbolism, rarity, condition, and even error strikes, these special quarters can be worth more than their face value.

Be it to make some bucks over a well-conditioned coin, be it to start a collection. Don’t hinder the wish to look through your change for these coins. In this article, we will show examples of a bicentennial quarter worth money. Jointly, we will show what gives them value, their history of production, as well as how much they can sell for.

And if you enjoy collecting silver quarters, make sure to check our article on what quarters are worth money and check out the top 30 most valuable ones.

The Declaration’s 100th-anniversary, in 1876, saw no major change to the U.S coinage. At the time, the U.S Mint struck commemorative medals for the Centennial Exposition that happened in Philadelphia.

However, things were different one century later. As the year 1976 approached, it was a general agreement that the date was a special occasion deserving of attention.

The commemorative coin program had been halted since 1954. Yet, bills proposing the 1776-1976 bicentennial pieces were introduced in Congress in 1971.

The legislation would eventually pass, requiring a temporary redesign of the reverse of the quarter, half-dollar, and dollar coin, as well as the addition of the 1776 1976 bicentennial date on their obverse.

Production began a year prior, in 1975. The bicentennial quarter dollar, half dollar, and dollar were struck in large quantities for circulation. Such was done as a means to avoid hoarding from collectors. Over one billion quarters were struck in both Philadelphia and Denver branches of the United States Mint. There were also about 9 million examples issued with part-silver composition - as opposed to the traditional copper-nickel - destined towards collectors.

The designs for each of the three coins’ reverse were chosen from a nationwide competition.

Obverse and Reverse side of a Bicentennial Quarter

The quarter’s reverse design features Jack L. Ahr’s depiction of a colonial revolutionary playing drums. To the soldier’s left, a torch is circled by thirteen stars. These represent the Original States. Beneath the victory torch is engraved the national motto, “E PLURIBUS UNUM”. Arching around the head of the drummer boy, the inscription reads “UNITED STATES OF AMERICA”. On the lower half of the reverse, it reads “QUARTER DOLLAR”. The designer’s initials, “JLA”, are also present beneath the American Revolution soldier’s left arm.

The bicentennial design of the obverse maintained the famous George Washington design by Flanagan. It depicts the First President’s left profile with the national motto “IN GOD WE TRUST” to its left. The word “LIBERTY” arches along the top half of the obverse. The mint mark is present to the right of the profile. Unlike all the obverse of previous quarters, the dual date reads “1776-1976”, representing the 200th anniversary of the signing.

On October 23, 1973, the Treasury Department and U.S Mint's director Mary Brooks announced a national contest to choose the new designs of quarters, half dollars, and dollar commemorative coins. A panel of five judges appointed by the National Sculpture Society administered the competition. Any U.S citizen was eligible to participate, with the exception of members of the panel and government sculptors.

With a prize of $5000 for each of the three winners, the Mint officials received 15,000 inquiries and 884 entries. The winners were chosen on March 6, 1974, by Treasury Secretary George P. Schultz.

Over 1 billion bicentenary quarters were minted throughout the U.S Mint’s facilities. Incidentally, the mintage for the special coins began one year earlier to their inception in the market, 1975. This happened, mainly, as a means to discourage hoarding.

It was commonly thought that these special quarter, half dollar, and dollar coins would become valuable over the years. As such, guaranteeing a sufficient number of this special coin to the general population was a priority for the national mint. In any case, proof sets along with uncirculated sets were struck for collectors.

In view of a large number of the quarter dollar struck by each mint, some varieties stand out as more valuable than others. Prices may vary from the coin’s face value and melt value up to thousands of dollars, in some cases.

With this in mind, let’s take a look at some bicentennial quarters varieties worth money. All prices and auction values are according to professional coin grading services, such as PCGS and NGC.

The Philadelphia Mint struck all of its 1976 bicentennial quarters in cupronickel clad composition. On top of that, both demand and anticipation for the commemorative coin issue were high. For that reason, the quantity was prioritized over quality.

In circulated conditions, old quarters are worth face value. However, many coins, quarter, half dollar, and dollar, were pulled from circulation while still new. You can still find preserved examples worth money nowadays.

1976 Washington quarters in Mint State 65 condition are more common for preserved bicentenary quarters. Generally, coins of this grade may be found on pocket change. These quarters are worth over their face value, with auction prices starting from $6 up to $10.

Most Philadelphia bicentennial quarters in MS66 and MS67 conditions were pulled out of circulation after being introduced. Although not too rare, the coin values from $15 to $40 for MS66, along with $35, $70, and up to $127 for MS67 conditions.

The highest known grade for a Philadelphia-struck bicentennial quarter is MS67+. Due to their overall lesser condition, no coin in Mint State 68 condition on above has ever been found. The only MS67+ example has never gone to auction, though experts believe it has an estimated price of $2850. Potential better-graded Washington quarters may be worth more than that.

U.S Mint’s Denver branch also used cupronickel clad for striking all of its quarters. All Denver quarter dollars bear a “D” mintmark on its obverse, located to the right of Washington’s profile.

Furthermore, Denver bicentennial quarters were struck in slightly better conditions. For this reason, you can find examples in MS68 conditions.

A Denver Washington bicentennial quarter in MS68 status is the best-known grade for this variety. Therefore, they can be a valued piece among collectors. Their price goes from $3220 up to $6463.

As a means to avoid hoarders and appease collectors, the United States Mint designated the San Francisco branch to strike proof bicentennial quarters. The facility struck not only quarters but half dollars and dollar coins. Washington quarters produced in their facility bear an “S” mintmark similar to Denver’s.

The proof quarters were not intended for circulation. They have a shiny, mirror-like finish. There exists three main varieties:

About 7 million examples of the clad proof dual date quarter were produced. In recent auctions, pieces in deep cameo finish were sold for $7 up to $50, in PR69 grade, and $77 up to $93 in PR70 grade.

The San Francisco Mint struck close to 4 million proof silver quarters. Their metal blanks are comprised of 40% silver and 60% copper. Deep cameo PR69 examples can reach from $15 up to $40, while in PR70 uncirculated condition may range from $139 to $250.

In spite of Philadelphia and Denver’s production of regular quarters, the Bay area also produced a business strike of the quarter dollar. However, instead of the usual clad composition, these were a silver quarter. Close to 5 million were issued.

They are more valuable than others, due to their smaller mintage and metal content. A silver 1976 bicentennial quarter graded MS68 is valued from $23 to $144. Albeit, an MS69 example ranges from $5060 up to $19200. There are only six known coins of this grade.

Their nature as a commemorative issue can be enough to make the 1976 quarter stand out from other quarters. Yet, unique varieties featuring coin errors can make the bicentennial quarter worth a lot more than they normally would.

When a coin is struck by a coin die that is not properly made, its reverse and obverse inscriptions may get doubled. Collectors have discovered a few doubled die bicentenary quarters. These valuable coins have auction prices ranging from $810 up to $3246.

Every so often a one-of-a-kind coin can be struck. Overstruck coins happen when an already fully struck coin, or a different planchet, gets pressed by a coin die. To illustrate, there are bicentennial quarters struck on other coins and planchets, such as on a dime.

Check our article on What are Dimes Made Of?

These quarters can represent top uniqueness and give character to a coin collection due to the personalized content. These are very valuable. The aforementioned example sold in a recent auction for $12000.

A different variety of coin errors can happen if something, such as cloth, finds its way into the coin striking chambers. There are known Bicentennial quarters that were obstructed by a piece of cloth when being produced. The obverse of the coin features a weaving pattern, making them unique and very valuable.

The United States of America has a rich history in coinage. Our coins can be used as a means of celebrating, as a society, milestones, victories, and anniversaries. Bicentennial quarters are no different.

These intricate coins have been around for over 45 years. Becoming part, during this time of many people’s lives, coin collectors or not. We hope this article contributed to understanding their value.

Whatever the case may be, why not take a look through your pocket change. After all, even a circulated coin may be a good surprise and reward you some money.

How Many Bicentennial Quarters Were Made?

In total, over 1.6 billion quarters were struck for the 1976 bicentennial. Their production occurred in three different U.S Mint facilities: Philadelphia, Denver, and San Francisco.

Both the Philadelphia and Denver branches were responsible for the business strike of regular quarters. The San Francisco Mint produced proof and uncirculated versions sold in sets for coin collectors in both silver and copper-nickel clad.

There are no quarters dated 1975. The U.S Mint was encharged of a new design for the quarter, half-dollar, and dollar coins celebrating America’s bicentenary.

Since bicentennial coins would take time to produce, not enough 1975 pieces could be struck to prevent their shortage. President Gerald Ford signed a bill for 1974 coins to keep being produced until the striking of bicentennial coins began.

How Rare Are Bicentennial Quarters?

Error coins, like doubled die, overstruck, and struck through quarters are also worth hundreds.

A few 1976-S Silver Proof quarters without the “S” mintmark were issued for President Gerald Ford and his appointment’s secretary in an American Numismatic Association convention. It is not known if these still exist.