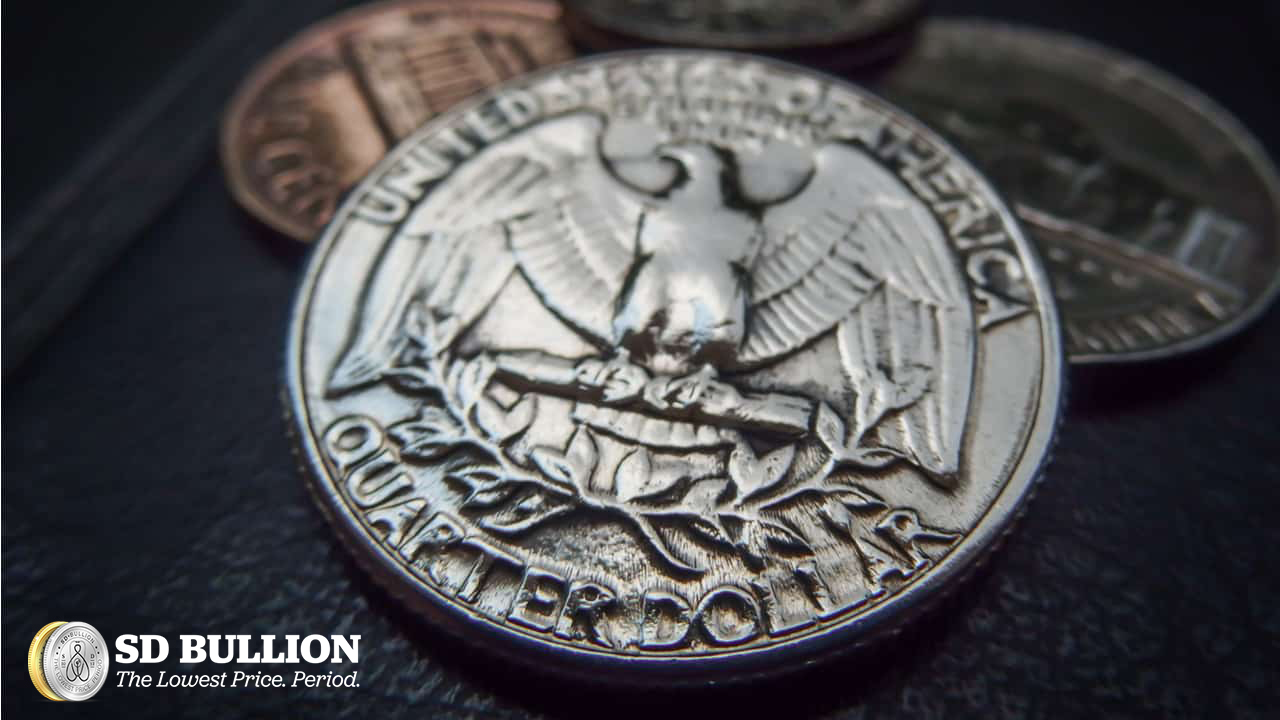 As children, we were very excited to discover a quarter left under our pillow by the tooth fairy. We may have wondered whether it was silver. Many adults still have questions about quarters, such as “what are they made of?" and "how much do they weigh?"

The answers to these questions are not as simple as you may think. The quarter has changed many times over the years to fit the needs of the era.

What are quarters made of?

It’s a common misconception that some of the coins in our pockets are made of precious metals. There was a time in U.S. history that circulating coins actually did consist of gold and silver. As the prices of these metals increased, minting coins out of them became impractical. Early U.S. quarters were made of silver, but they were composed of 90% silver and 10% copper from 1873 to 1964. Today, quarters are made of a much less costly combination of copper and nickel.

How is silver measured?

U.S. quarters minted before 1965 contain 0.1808 troy ounces (6.25 grams) of physical silver. But what is a troy ounce? A troy ounce is a unit of measure used for weighing precious metals that dates back to the Middle Ages. Initially used in Troyes, France, 1 troy ounce is equal to 31.1034768 grams, according to the UK Royal Mint. Other items, such as sugar and grain, were measured in standard ounces: 1 standard ounce weighed slightly less — 28.35 grams.

Some historians believe the troy ounce had its origins in Roman times. Romans standardized their monetary system using bronze bars that could be broken down into 12 pieces called “uncial” (ounce). Each piece weighed about 31.1 grams. This unit of measurement became important as trade in Europe expanded. Weighing precious metals accurately by using this system became a necessity for commerce.

The troy ounce is retained even today as the standard unit of measurement in the precious metals market to ensure purity standards, and other common measures remain consistent over time.

So, how much does a quarter weigh?

When the U.S. was still a young country, the federal government passed the Coinage Act of 1792. It established the U.S. dollar and dictated the official weights for different coins, including a new 25-cent piece. The new coin was to weigh 0.211 ounces (6.01 grams) pure silver, or 0.237 standard ounces (6.74 grams). These weights lasted until the Coinage Act of 1873, when U.S. quarters began to be composed of 90% silver and 10% copper, with a slightly heavier weight of 0.022 ounces (6.25 grams).

Do all quarters weigh the same?

The Draped Bust quarters were minted from 1796 to 1807. These valuable quarters each weigh 6.74 grams. Probably around 10% of the original mintage of 6,146 survives in some grade, though most are in the About Good to Fine range. Being a one-year type, and a scarce one at that, enough was saved in midgrade so that V.F. to A.U. coins can be located, though at a mid-five-figure price. Uncirculated pieces are also known, and these will typically set you back more than $100,000.

The 1796 quarter is a key issue in any grade and is a landmark in the U.S. coinage series. Quarter dollars minted from 1804 through 1807 continue the Draped Bust obverse first used in 1796, though the star count was reduced from 15 stars to 13, with seven at the left and six to the right.

The Capped Bust quarter was first minted in 1815 with a weight of 6.74 grams. For the years 1837 and 1838, the weight changed slightly to 6.7 grams. Following a suspension of quarter coinage after 1807, the denomination was again produced in 1815, at which time the Capped Bust style was introduced. The motifs are similar to those found on other silver denominations of the period, first seen on the half dollar of 1807.

Along with the other silver denominations, quarters were reduced in weight in 1853 as a measure against the hoarding and melting of newly released pieces. The authorized weight, previously 103.125 grains, was lowered to 96 grains.

In 1873, the authorized weight of the quarter dollar was slightly raised from 96 to 96.45 grains. To signify the new standard, arrows were added to the date of quarters produced later in 1873 and all those produced in 1874. After 1874, the weight remained the same, but the arrows were no longer used.

The more-common silver quarters weigh 6.25 grams. Every silver quarter minted from 1873 to 1964 has the same weight of 6.25 grams. This includes all of the silver Washington quarters, Standing Liberty quarters, and Barber quarters. These quarters consist of 90% silver and 10% copper. You are unlikely to find them in circulation, but you can buy them as bullion or individually as collectible coins. See more here: how much silver is in a quarter?

These rare, early-issue silver quarters have different weight variations, depending on the series. Note that these older quarters are entirely out of circulation and can only be bought as collectible coins. So unless you are a collector, then you will likely never come across them.

- Washington Bicentennial - Issued by the United States Mint from 1975 to 1976 to celebrate the 200th anniversary of the American Revolution, the reverse was redesigned to include a Colonial Drummer. The obverse remained the same, but instead of the mint year, it was imprinted with the dual date 1776-1976. Although the vast majority of these coins were struck using the current copper-nickle-clad, the San Francisco Mint produced 40% silver prints as well.

- Washington 50 States and District of Columbia and U.S. Territories - considered the most successful numismatic series in history, these featured 50 different designs on the reverse to celebrate each State's unique history and culture. They were issued from 1999 to 2008. In 2009 the states' designs gave way to the District of Columbia and the United States Territories.

- Washington America The Beautiful - A series of 56 different designs to celebrate a different National Park or National Site, one from each state, federal district and territory. The program started in 2010 and is schedule to end in 2021.

Many people do not realize that the popular silver quarter was replaced with a more cost-effective combination. Due to the abundant supply available of copper, nickel, and zinc, this mix has become the prominent composition that we all know as the modern-day 25-cent coin. Ironically enough, copper and nickel is a unique element combination used in the industry.

The quarter, nickel, and dime include a copper-nickel combination called cupronickel. This durable, corrosion-resistant alloy is an inexpensive way to produce circulating coins in bulk. In U.S. coinage, cupronickel is often found in a 3-to-1 ratio of copper to nickel. In other applications, such as the automotive industry or the marine industry, the proportion is higher or lower depending on the need.

Cupronickel is also used in many different ways, such as shipbuilding and ship repair. Its cost-effectiveness and solid-state of the element lend itself for perfect use in high-pressure applications. It is also used in construction as reinforcements for beams and load-bearing structures. Strengthening elements are added to cupronickel. It is not uncommon for cupronickel to include iron or manganese. Other elements, such as zinc and chromium, have been used to add strength to cupronickel. Cupronickel is also recyclable, meaning that it can be reused without losing its chemical properties.

Taking a Closer Look at Coins

The quarter has a fascinating history, and its present is also interesting. For example, the specifications of the popular state quarters are quite varied and incorporate unique, state-specific elements in their designs.

Are you interested in more facts about other coins? Then it’s worth looking into how much a nickel, dime, and a penny weigh.