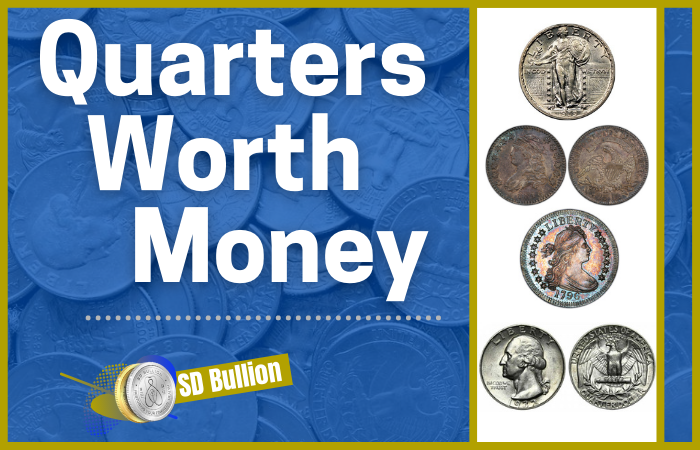 Although quarters have been around since the early years of our nation, they haven’t always been a staple of U.S. currency. The first quarter was produced in 1796, but the coin wasn’t consistently minted until 1831.

Quarters have gone through many design changes over the years. For example, the familiar Washington Quarter design made its first appearance in 1932. With so many different versions, it’s not surprising that there are many silver quarters worth far more than 25 cents.

Let’s take a look at 30 quarters worth money — big money.

How Quarters Are Valued

Before we dive into specific quarters and you start lookingat your spare change, it’s important to understand how coin values are determined and why some quarters are worth as much as they are.

Dealers typically use several factors when pricing coins, including:

Coins are primarily valued by the supply of a coin or how rare it is. Thus, a coin’s supply is partially due to its original mintage — how many were initially produced. For instance, proof coinage, which refers to special early samples of a coin issue, is rarer because fewer coins were produced.

No matter the number of coins initially minted, many coins are lost once they enter circulation. Some become damaged, are reclaimed for metal, or are lost through other means. Thus, the number of surviving coins from a mintage also plays a role in their value. The rarer the coin is, the higher the value to coin collectors.

Several factors influence the demand for coins. For instance, it might display an iconic design that is no longer in use, it might contain a specific mint mark from a branch of the United States Mint (such as the San Francisco, or the Philadelphia Mint), or a mint error. The higher in demand a coin is, the more it will be worth and likely to be one of the most popular collectible coins today.

Yet another factor influencing value is a coin melt value. This factor applies mostly to coins made of gold and silver. As precious metal values rise and fall, a coin’s value may be worth much more than its face value due to the precious metal it’s made of. Thus, it is safe to assume that silver quarters, minted prior to the ending of the silver standard in the U.S., are worth far more than newer quarters made of copper and nickel.

Of course, the condition of the coin also plays a significant role in its value when it comes to coin collecting. Except for the rarest of coins, many of the most valuable coins will be uncirculated and, thus, in the best condition. High graded coins will always be worth more than an average condition coin.

The five factors described above are considered when determining the value of coins. As a result, the quarters discussed below are worth money because they fall into most of these categories.

Here are 30 quarters worth money, presented in order by the year minted, along with a brief description and their potential value.

The 1796 Draped Bust quarter was the first edition of the U.S. quarter. It’s estimated that fewer than 700 of these extremely rare coin have survived to modern times.

Quarters were first minted in 1796 but were not minted again until 1804. There were only 6,738 of the 1804 Draped Bust quarters produced, and experts think there are less than 200 left and only about 5 in original mint condition.

Although relatively few coins were produced during the first two iterations of the quarter, 121,394 of the 1805 Draped Bust quarter were produced. There were four varieties to this beautiful coin, with the B-2 being the most valuable because of its “mint frost” luster. Other quarters of this year had a satin finish.

The 1807 B-2 Draped Bust quarter had obverse and reverse dies that were not used in other quarters of the time.

A fire in 1816 at the U.S. Mint led to changes in production, with the first proof quarters arriving in 1818. There were only a few made, and only two are known to exist.

This quarter from 1823 is unique because it has a re-punched date, known as an overdate. During this time, the dates were punched into the coin manually, and if the date were not appropriately struck, it would be done again. In this case, a 3 was punched over a 2.

This quarter is another example of an overdate. However, in this case, an 1822 quarter had been re-punched to 1823, and then again for 1827.

This is yet another example of an overdated quarter, except in this case, the engraver made a mistake. The coin was originally punched with 50 C, which would have signified a half dollar, and re-punched with the proper denomination of 25 C.

In the 1800s, proof coins were made-to-order for collectors, and only 10 of these proof quarters were made.

The Seated Liberty quarter was first produced in 1838 and initially had no ornamental drapery on the left arm of Lady Liberty. There was only one known proof of this quarter.

This is another rare proof coin, and the highest value example has a steel blue tone.

The New Orleans Mint made 382,200 of these quarters before the design was changed so that extra drapery appeared on the left arm of Lady Liberty. Most of these quarters were heavily circulated, and few remain in good condition.

Value: One of these quarters in good condition sold at auction for $329,000.

This is another proof coin, and only four were produced for this year.

There is only one certified coin of this proof and year, although two others are believed to exist.

Only three of these proofs were made, and one quarter remains almost flawless.

Coins from the Carson City Mint, marked as CC, are sought after because fewer coins were struck at this mint. There were only 8,340 of the 1870 quarters minted after the facility opened that year.

Value: Values range from about $10,500 for good condition up to the six figures for an uncirculated coin sold at auction.

More 1872 quarters were produced in Carson City to the tune of 22,850, but much less have survived. These are less valuable than many of the quarters on this list but far more affordable for the average collector.

Value: In good condition, these quarters run about $2,000.

There were many more of the 1872 Liberty Seated quarters made at the San Francisco Mint, but they are still desirable for collectors looking to own a coin from this date from all mints.

More than a million quarters were minted in Carson City in 1873, but only five were made without arrows.

The Barber quarters series is widely collected, with these quarters being known for several unique key and semi-key dates. The 1896-S is a popular semi-key coin, and 188,039 were minted this year.

Value: A quarter in good condition is worth about $850.

The 1901-S Barber quarter is one of the rarest and most expensive quarters.

This quarter saw the lowest mintage of the 20th century at only 40,000 coins. Despite the lower mintage, it’s not the most valuable quarter.

Value: A quarter in good condition will cost about $1,550.

This first-year-issue quarter’s 1916 key date makes it one of the most sought-after quarters of the 20th century. It’s also prized by collectors because it displays Lady Liberty’s right breast.

Another example of an overdate quarter, a few thousand of these quarters are still in existence.

Value: One of these coins in high mint state grade will cost about $1,800.

Although almost 2 million of these quarters were produced in San Francisco, the date has worn off many of them, and only four remain in mint condition.

The 1927-S is one of the rarest of the Standing Liberty quarters due to weak strikes, and fewer were minted in San Francisco due to these issues. Only an estimated 1% of the mintage was struck well enough to show the details on Liberty’s head, giving these the “full head” designations.

Value: One of the two finest remaining quarters sold at auction for $258,500.

This was the first year that George Washington began being featured on the quarter. Just 436,800 Washington Quarters were minted in Denver.

Value: In good condition, one of these Washington quarters will run around $160.

Another 408,000 coins were minted in San Francisco for this date.

Value: In good condition, this quarter is worth about $150.

The final quarter on this list is the 1937 Double Die Obverse Washington quarter. Although there are several double die varieties of the Washington series, the 1937 version is the rarest and most valuable.

Value: These Washington quarters are valued at about $600 and up.

The quarter has gone through many variations throughout the years, and there are many rare quarters worth money. From small mintages and proofs to overdates and one-of-a-kind errors, these 30 quarters are worth the most money.

Which quarter will you look to add to your collection? Will you be looking at your pocket change in search for a hidden treasure?

Purchase 90% Constitutional Silver, like silver quarters and silver half dollars, from SD Bullion at the lowest premiums over the spot price of silver. Talk to our customer support if you need any assistance. We are available over the phone at 1(800)294-8732 or at sales@sdbullion.com.