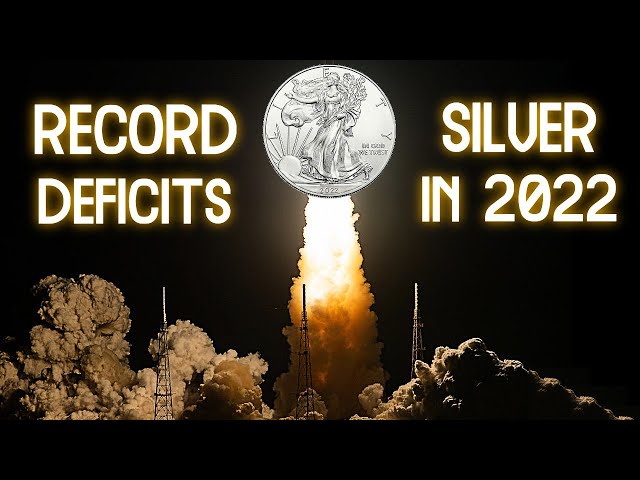 The financial world learned last week that the global silver market in 2022 is headed for its biggest supply deficit in decades. Silver supplies are shrinking to meet outsized demand.

The Silver Institute made headlines stating that worldwide silver demand is on track to eclipse 1.2 billion ounces in 2022, up an additional +16% from already historically high levels reached last year in 2021.

Here we will dig into some of this all-time high silver demand data, as well as news related to record high price inflation ongoing and the breakneck speed at the fiat Federal Reserve and central banks around the world are testing and launching their fiat Central Bank Digital Currency programs.

The gold and silver markets sold off slightly for the week's trading.

The gold-silver ratio climbed slightly to finish this week at 83.

Reuters published the following regarding the current record-sized silver deficit in 2022.

A nearly -200 million ounce silver supply deficit in the face of escalating demand is a massive outlier from the norm for the global silver market. The size and scale of this modern silver warehouse drain rivals the 1995-1997 Berkshire Hathaway Warren Buffett drain of COMEX silver.

Metals Focus projects further silver supply shortcomings to come. In other words, the fresh silver mined and recycled will not keep up with future demand.

Most of the excess silver the world has been gobbling up has been funneling out of unsecured ETF selloffs, flying out of the City of London and COMEX silver warehouses since the Silver Squeeze movement kicked off in Q1 2021, and especially thus far in this year 2022.

Over -102 million oz of silver bullion has been withdrawn from the COMEX silver warehouse since Q1 2021, much of which was manufactured into private silver bullion mint products to help meet ongoing Silver Squeeze silver demand.

And in terms of ongoing silver coin, silver bar, and privately minted silver round demand. Those figures for this year are also already at record high levels, driven by ongoing US, Indian, German, and other nations' silver bullion demand.

And while we know many of you have tried to get your family and friends to do the same, many who ignore now will pay a much higher value for their bullion allocations later.

While the building commodity bull market of this decade, the 2020s, has taken a breather since the start of this year, 2022, silver has lagged. It will have much catching up to do once the building bullish fundamental supply-demand factors squeeze spot prices higher in the coming future.

With record-high silver supply deficits and already escalating energy prices, 25% of London and COMEX silver warehouses have drained already. It is hard to imagine how the world will continue getting the escalating silver it demands without much higher bid prices to come.

This week we saw a new multi-decade high price inflation rate of +11.1% in the United Kingdom, a rate of currency debasement that will cut the country's fiat currency purchasing power in half by the end of this decade.

The United Kingdom is, on average, paying $7.20 per gallon of gasoline and twice the average prices for electricity and natural gas as US citizens.

Heating costs in the UK are expected to triple this winter from last.

With further secular price inflation this decade, it's no surprise that hundreds of governments worldwide are scrambling to start their fiat CBDC payment systems. In doing so, respective governments can further clamp down control on their respective citizenries suffering under escalating fiat currency debasement now and to come.

This week the NY fiat Federal Reserve Bank announced a 12-week pilot program amongst 12 major mega-banks and fiat financialized institutions, who will be testing out wholesale CBDC payment settlements to end this year into 2023. Testing how they will settle major bank currency transaction payments for the coming fiat CBDC infrastructure in the USA.

The fiat financial powers will continue to sell their coming fiat CBDC systems as secure, private, cost-effective, instant, and convenient.

But you can press pause to read a few of the likely drawbacks they will bring once they have been foisted upon us without real choice.

Most of you have known these developing CBDC systems, and plans have been in the works for years. And many of you have been acquiring your private bullion allocations well ahead of their soon launch dates.

Time is now running out both in terms of acquiring bullion at reasonable, relatively low historical valuations while simultaneously locking in precious store of value privacy while we still can.

As always, to you all out there, take great care of yourselves and those you love.