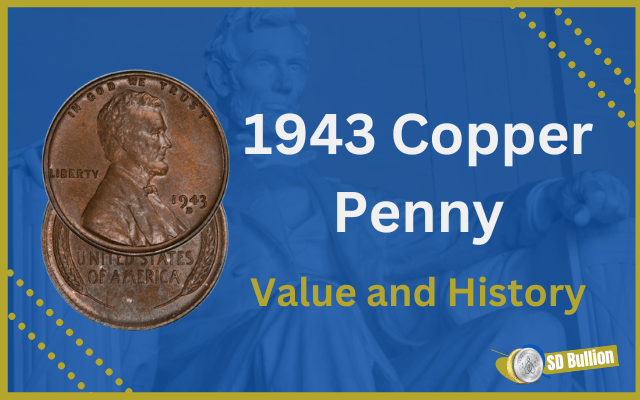 The 1943 copper penny is one of the US's most charming collectible coins. This article will walk you through this item's captivating background and journey, which resulted in an expansive and exceptional artifact that can leave even the less experienced collectors dying to lay their hands on it.

History of the 1943 Copper Penny

The 1943 copper cent, or 1943 copper penny, is part of a group of production of wheat pennies, or Lincoln cents, minted from 1909 to 1958. The moniker comes from the reverse design showcasing decorative branches of wheat. Victor David Brenner, a New Yorker sculptor, designed them, and they were minted to celebrate President Lincoln's birthday.

As presented below, you can see the rare coin show the image of President Lincoln (that would explain the term "Lincoln cents") and the date of minting on the right while the word "LIBERTY" can be seen on the left. The reverse of the coin features two branches of wheat and the expression "ONE CENT." Below it, you can see the inscription "UNITED STATES OF AMERICA." At the top of the coin, there's the Latin expression “E PLURIBUS UNUM”, which means "One from many" in English. 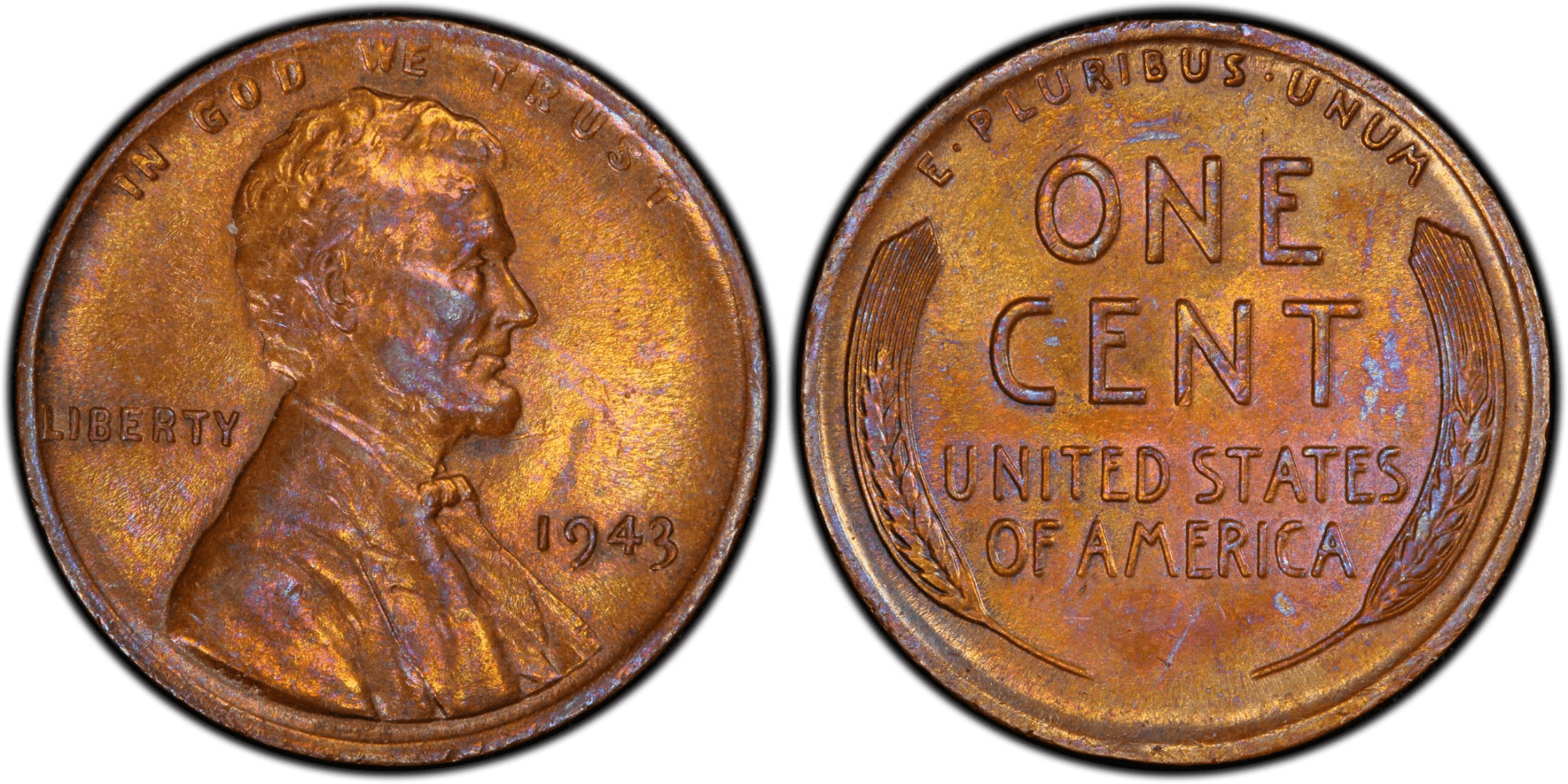 During World War II, the United States Mint began to save copper from currency production to be used for ammunition and other military purposes. Because of that, many of the previously copper-made U.S. coins were replaced with zinc-coated steel in 1943. But at the Philadelphia Mint and San Francisco Mint, a few copper pennies were still mistakenly struck on copper planchets. So 1943 copper pennies are rare high-value coins because, in theory, they should not even exist.

Originally these pennies were alloy cents made from 95% copper and 5% tin and zinc, but the composition changed in 1943 to become zinc-plated steel. These new steel pennies caused some confusion at the time, and they still do nowadays because the penny is often mistaken for 10-cent coins. In fact, many people believed 1943 Steel Cents were actual silver coins because of their silvery coloration, beins sometimes called the “silver penny”.

After only one mintage of the zinc-coated steel pennies and overwhelming disapproval, the US Mint reinstated the copper alloy in 1944. However, the transitional error, in other words, the misuse of copper plates in 1943, resulted in some of the rarest US coins in American history that could be worth hundreds of thousands of dollars.

Interestingly enough, in 1944, some leftover steel blanks from 1943 were used, resulting in the also rare and valuable 1944 Steel Cent.

How many 1943 copper pennies have been found?

There are approximately 40 real copper pennies known to exist and in collectors’ hands. They were struck by accident on copper planchets remaining on the press hopper when all the 1943 pennies were struck on steel blanks that year. These are one of the rarest error penny coins to exist, and because of that, the rare copper version tends to be counterfeited a lot and can easily deceive a less experienced eye. 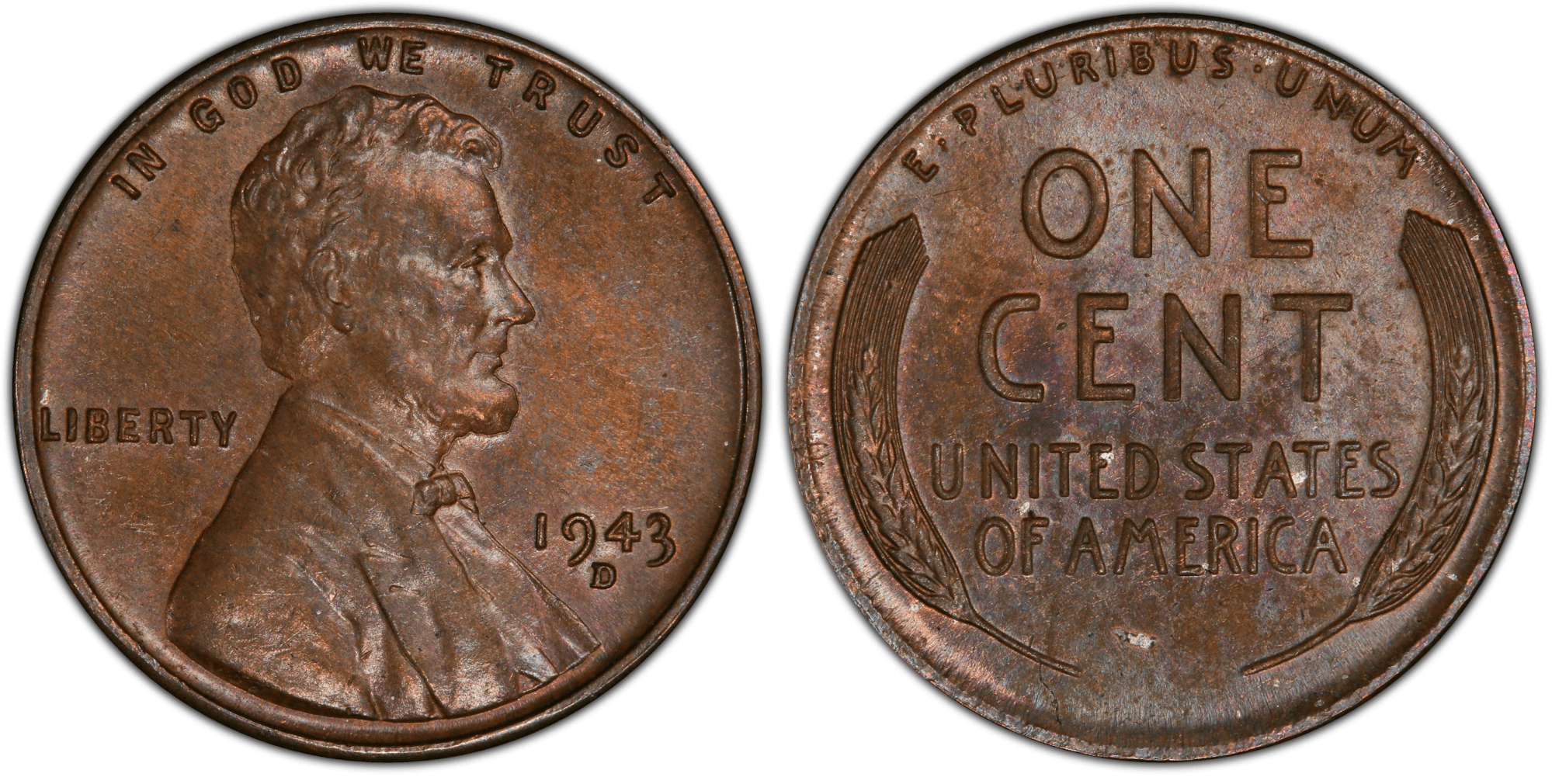 This remarkable coin is the only piece made of bronze by an employee from the Denver Mint. The design of this bronze penny is stronger than the others because it is believed that the employee in question hand-fed the bronze planchet into the coining press and struck it twice to enhance its designs, making it a unique and distinct piece due to its history.

One possible reason for this bronze coin's existence is that the employee must have kept it a secret for many years, but when he died, his child took it to inspection, which was confirmed to be genuine. This coin is graded MS64BN by PCGS and was recently sold, in January 2021, for $840,000 at Heritage Auctions.

How much are 1943 copper pennies worth?

Not all treasures are made of gold. The 1943 copper penny is valuable due to its rare occurrence, but like every other coin, its value depends on its condition and luster. So you must consider that if the penny is in average condition, that is, a piece with circulation marks and minor to little bruises, its value might decrease compared to a Lincoln cent in mint condition, which is usually an uncirculated penny, almost new.

Here is a price list of all variations of the 1943 Copper Cent according to PCGS Price Guide:

1943 Copper Cent from the Philadelphia Mint (no mint mark) 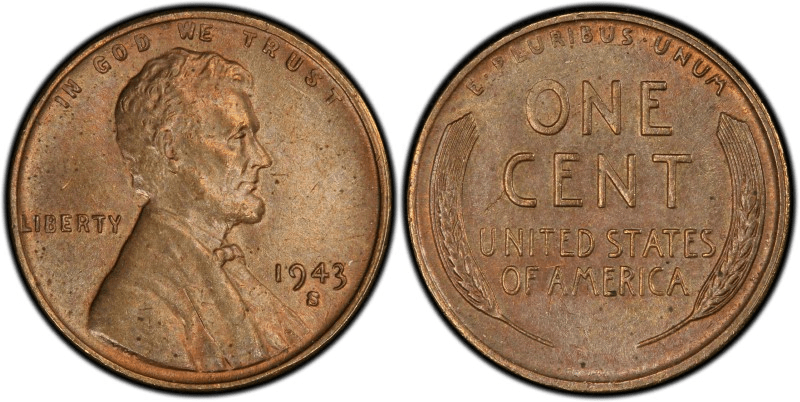 Check out our list of the most valuable pennies in US history!

A counterfeit coin is ultimately a fake. The purpose of most counterfeited old currency coins is to deceive people into buying replicas for the price of rare coins. Considering that the market of collectible coins is responsible for making a lot of profit for dealers, there's a risk of encountering false pieces remarkably similar to the real ones.

Some 1943 steel pennies were coated in copper and sold as real copper pennies. These are easily identifiable since you can just check if it sticks to a magnet (steel is magnetic, copper is not). Another common forgery is done by scrapping the left half of the number “8” in 1948 copper cents, making it look like the number 3.

Some Chinese 1943 Lincoln pennies counterfeits are especially demanding since they are made from copper planchets and won’t stick to a magnet. They are only detectable by experienced specialists, from numismatics to third-party grading services.

How do you identify if a 1943 copper penny is fake?

There are a few ways to determine if you got a real 1943 copper penny in your pocket change.

It’s challenging to tell if a coin is fake since counterfeiting techniques are being improved over time and can fool even experts. There are a few ways to protect yourself from wasting precious time and money. If, by any chance, you encounter one of these treasured coins, consider investing some money to have it graded and certified. You can reach out to the American Numismatic Association or these other few trusted grading companies:

The 1943 copper penny is one of the highest-valued copper pieces of collectible cents out there. Its history is fascinating, which explains why there are many replicas and counterfeits trying to deceive and mislead inexperienced collectors. Even if you’re not lucky enough to encounter one of these in your pocket, just having one in your collection will certainly make you feel like you found the copper treasure at the end of the rainbow!