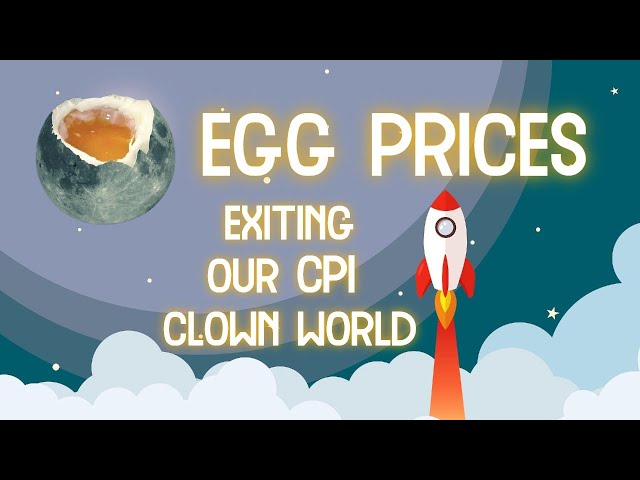 A reported combination of avian flu hen culling and sharp increases in feed costs and farming expenses worldwide have led to another wall climb in price for a staple in the world's everyday diet. The highly nutritious chicken egg often fetches more than 50¢ per single egg in city retail supermarkets in the USA.

The internet was ablaze on the matter, with every meme maker seemingly all clowning on the skyrocketing price of eggs and the increasingly limited availability of supplies.

Shoutout to those of you watching out there who had the foresight to secure your steady low-cost supplies. Surely that will continue paying dividends for years to come.

This past Wednesday's CPI report was the most significant moment in gold trading in this fresh new year.

The consensus was it would fall 1/10th of a percent, or ten basis points down from the last reading of 6.6%.

It did, 6.5 was considered neutral, and at the underreported rate, the nation's currency lost half its value in just over a decade. I will continue making the bullion bet; it happens faster.

Massive volumes of COMEX gold futures traded on the news, an immediate drop of about $20 oz, only to have gold longs power back and begin threatening $1900 within five minutes.

Craig Hemke of TF Metals Report pointed out that Citibank was likely the party buying the large gold deliveries at spot gold prices this past Wednesday for their House account.

The silver and gold markets had positive weeks in monetary precious metals trading.

The spot gold price took the momentum from CPI neutral Wednesday and continued into its close, now threatening near the $1,925 oz ask price to begin next week.

The gold-silver ratio climbed to 79 on gold's relative strength in trading this week.

Of course, China is not the only eastern central bank buying and declaring more official gold reserves.

I was reminded today of this moronic headline in the Wall Street Journal that ran Sep 20, 2022, in Q3 of last year when spot gold was around $1,678 oz. Yea, the same quarter in which government central banks on net declared they had been buying gold bullion reserves at record volumes not seen since the latter 1960s.

Russian citizens reportedly bought 40 to 50 metric tonnes of gold bullion last year in 2022. Nearly ten times what they collectively purchased the year prior. To put that amount in context, the US Mint sold 43 metric tonnes of American Gold Eagle Coins in 2022.

Heads up for the coming week's US debt ceiling distractionary headlines, where virtually every commentator will likely ignore the hundreds of trillions in unfunded liabilities the United States is legally bound to nominally pay on. Much of that will be coming due this decade into the next. You might recall gold being around this same spot price in August 2011 as it currently is now when the same recurring political showdown downgraded our national debt.

Let us turn now to the continued silver-sucking sound coming out from under the COMEX. Twitter handle @mikesay98 reported that this week over 5 million ounces of silver bars upped and left the COMEX system, a rather large chunk in a small smattering of days.

Finally, to wrap it up this week, I want to show you how silly the wall-climbing record price of chicken eggs looks in relation to silver and, since 1980, increasingly rigged CPI or Consumer Price Index.

First, here is a FRED chart showing that the price of eggs has fallen nearly 5X since Jan 1980 to now. The cost of a dozen grade A large chicken eggs was 88¢ per dozen to start 1980. The same year in which the US government and its Bureau of Labor and Statistics began increasingly lying to us all about the ongoing price inflation of the fiat Federal Reserve note (the same one that almost got destroyed by gold and silver to start that year).

You might think the ancient silver record price is still $50 USD or in laughable fiat Fed notes per troy-ounce spot. And literally, you are correct on its nominal fiat face value record high number.

Silver at $25 oz is like going to the grocery store now and buying a dozen eggs for less than 50¢ a dozen instead of these now nearly 50¢ per egg record price points.

Silver is still laughably cheap in relative value terms, at least for the time being.