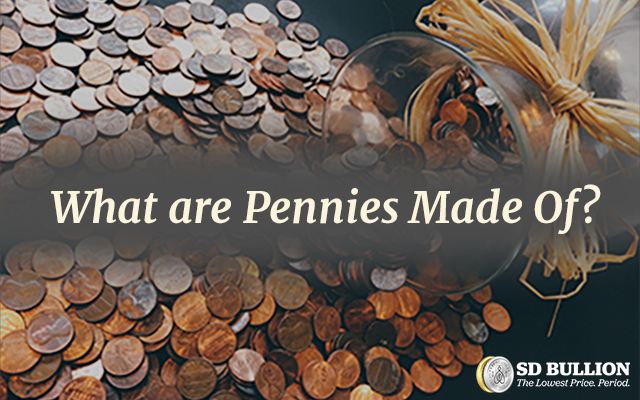 What Are Pennies Made Of?

It goes without saying that pennies are part of our nation’s rich history for their unique design, their changes over the years, and their appeal to coin collectors. They are generally thought to be made out of copper, but that is not true anymore, not since 1982 at least.

A Brief History Of The Penny

The first time a one-cent piece was struck was in 1793. Back then, the coin was entirely made of copper due to a 1792 law that stated that the American currency should be made of gold, silver, and copper. Gold should be used for $10, $5, and $2.50 pieces, silver for the dollar, half dollar, quarter, dime, and half dime. Finally, the cent and half-cent were to be made of copper.

In fact, over the years copper was the main material used for the minting of the penny. Some urban legends suggest that some pennies were minted in Silver, but that was never true.

Not only its composition but the penny’s design has also changed a considerable amount of times before becoming the Lincoln cent we grew accustomed to.

Penny Designs Over The Years

From 1793 to 1857, the penny portrayed the classical goddess Liberty on its obverse (front) on a variety of forms, which included:

In 1856, James B. Longacre, who was the Chief Engraver of the United States Mint from 1844 until his death in 1869, introduced a new design to the coin which portrayed an eagle in flight and became known as the Flying Eagle cent. It would only be used for a few years, though.

In 1859, the same portraitist proposed a new design for the penny: the Indian Head.

Also known as the Indian Head penny, that design would go on until 1909 when the Lincoln cent was adopted.

In its turn, the Lincoln cent also had a number of different versions:

What Are Pennies Made Of?

Let’s take a look at a brief history, according to the U.S. Mint, of what pennies were made of and why there were some changes over the years:

The cent was made out of pure copper;

During this period, the U.S. Mint made a slight change in the cent’s composition and made it out of bronze (ninety-five percent copper and five percent tin and zinc). Up until 1857, the pennies were so big they weighed more than 10 grams;

The penny was 88 percent copper and 12 percent nickel, which gave it a whitish-colored appearance (these were the Flying Eagle cent and the Indian Head cent);

Back to bronze (95 percent copper and 5 percent tin and zinc), with the exception of the year 1943. Due to the heavy use of copper in the war efforts, specifically in 1943, the U.S. Mint changed its composition to zinc-coated steel, giving it, again, a whitish look. Very few bronze pennies were minted that year from leftover coin blanks from the previous year. In January 2019, a bronze 1943 Cent was sold at an auction for an astounding $204.000;

In 1982 the U.S. Mint anticipated an increase in the price of copper and made a huge change to the penny composition, making it 97.5 percent zinc with a thin copper coating (copper-plated zinc). However, pennies from both compositions were minted that year.

Summary Of The Compositions And Designs Of The Penny

Keep reading to find out what your 1982 penny is made of or if you hit the jackpot with a rare 1943 bronze penny.

Are you interested to know the Top 19 Most Valuable Pennies ever sold?

How To Tell If A Penny Is Copper Or Zinc?

First, if your Lincoln penny is older than 1982 and it’s not one of the 1943 steel cents, it’s definitely made out of copper.

In 1982, however, both 95% copper and the copper-plated zinc pennies were made and there are a couple of ways to find out which one is yours.

This is the best and most reliable way to find out if your 1982 penny is made of gilding metal (95% copper and 5% zinc) or copper-plated zinc. Just make sure to use a scale that is able to detect a tenth of a gram because the 95% copper penny is .61 grams heavier than the newer ones. Regular scales will round up the weight of both versions to simply 3 grams and you won’t be able to tell the difference that way.

You will need a granite surface for this test. Also, make sure to have, at least, a known copper-plated zinc penny at hand (any penny dated 1983 or later).

Just drop your 1982 penny on the granite surface. If it is made of 95% copper, it should produce a high-pitched melodious ring sound, whereas the copper-plated zinc will produce a flat “clunk”. Take turns dropping them and try to hear if there is a difference. If your 1982 penny produces the same sound like the newer version, it is, most likely, also made of copper-plated zinc.

Those are extremely rare. Only around 40 are still known to exist. Because of its collector’s value, it has been faked by coating the 1943 steel cent with copper or by altering the dates of 1945, 1948, and 1949 pennies.

The best way to find out if your 1943 penny is made of copper or steel is to use a magnet. If it sticks to a magnet, it is not copper. If it does not stick, the coin might actually be made of copper. Take it to a trusted coin dealer for further investigation. Maybe you just found yourself quite a great penny!

At SD Bullion, you can find most of the designs mentioned in this article on gold, silver, or even copper bullion products. Make sure to check our collections.

Also, do contact us if you have any questions related to our products. We will be happy to assist you.

If you want to learn more about pennies or the history of other coins, check out these related articles from our website: