When to Sell Gold and Silver?

We continue to await a coming wall of bankruptcies and write-downs still unfolding from the viral economic lockdowns and ongoing tepid consumer spending response.

It appears the current consensus amongst many in the investing crowd is that much of the real underlying truth and painful repricing will finally begin in earnest following the US election this fall 2020, looking out into the first quarter of 2021. A time which many expect the proverbial stuff to start hitting the fan. 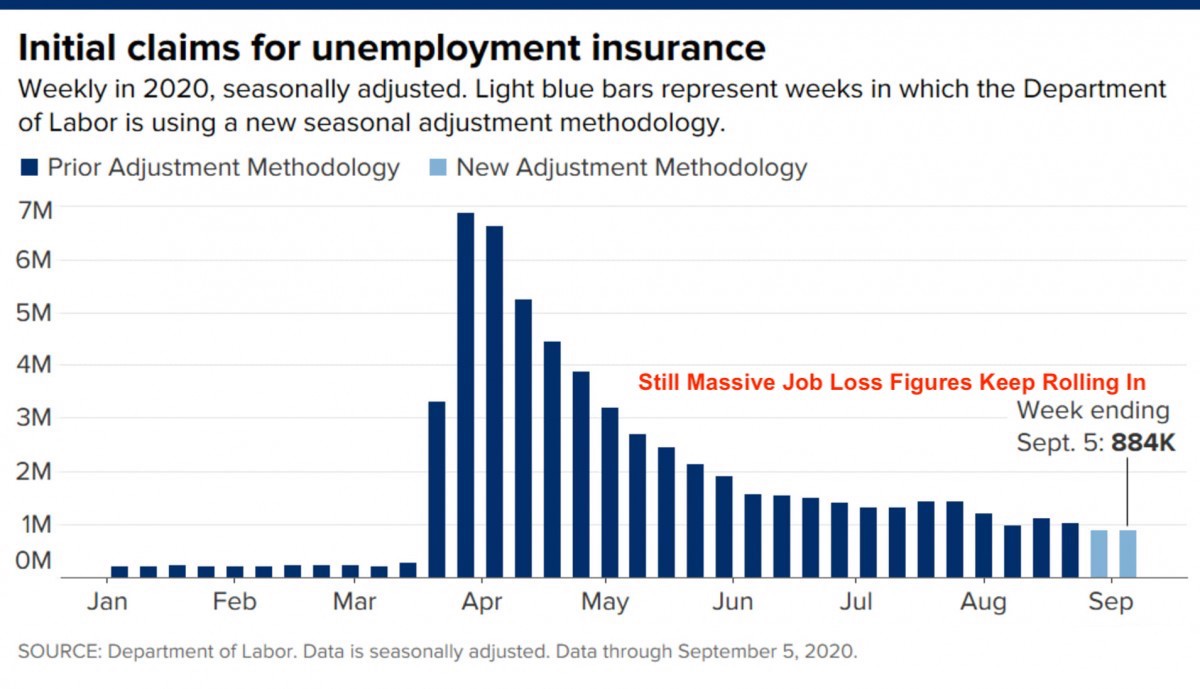 More than 30 million US citizens are out of work, and consumer spending remains off by magnitudes of where it had been for years leading into this viral economic consolidation event. 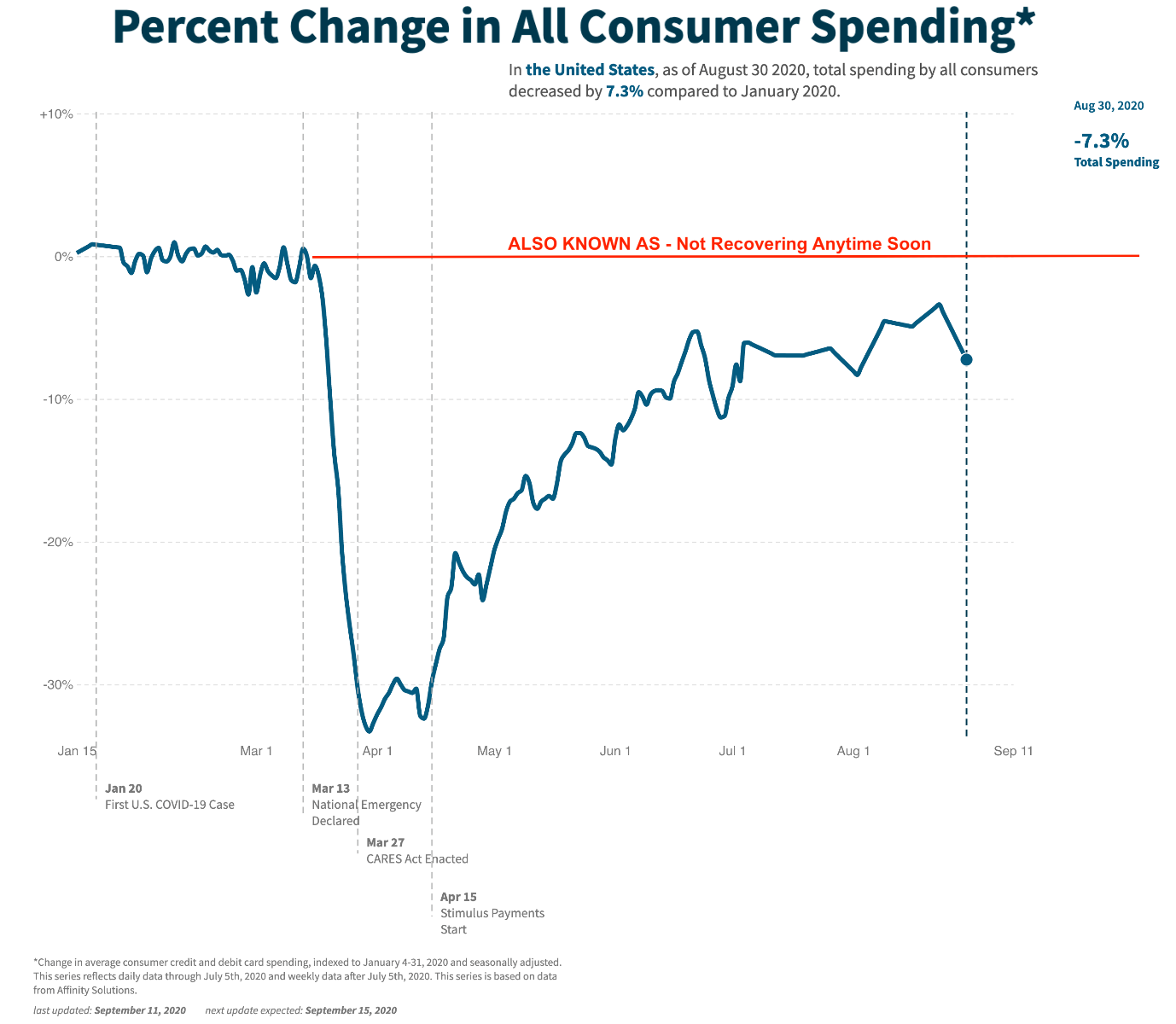 This week's SD Bullion market update will be a brief but long term exercise in valuation history, looking out towards the future using some basic assumptions.

Let's start with the facts. Our precise future is mostly unknowable in a myriad of manners.

But we can still reliably consider some historic past precedents, the rhyme of history if you will. While also thinking through probabilities to better determine if and when someday, we might reallocate some capital and sell silver and some gold bullion investments (e.g., additional when to sell silver insights at the 2-minute mark).

Of course, as we have for nearly five decades, been living under a full fiat currency global monetary regime. It's a proven fact that always maintaining a prudent percentage of one's liquid net worth in physical bullion makes commonwealth protection sense.

And given the recent viral fiat currency monetary base M0123 explosions of late.

If you yourself don't have any bullion allocations yet, do some bullion research, then get shopping with slow and small portions to start.

Most of us watching here have likely slowly and diligently acquired our current bullion and precious metal investment positions over many years and even decades.

Yet this week, we're covering how there will likely come a day for you or progeny. It will make sense to slowly but surely, reallocate some capital by winding down some of our precious metal positions once they have revalued substantially higher from today's levels versus other currently overvalued asset classes.

Typically every financial market and or asset class eventually gets its years in the sunshine moving from severe undervaluation to fair value to eventual overvaluations. Contrarian bets on gold, silver, and other precious metals are no different; they will soon enough, exponentially revalue higher. In my opinion, the precious metals are currently severely undervalued still vs. stocks, bonds, and real estate.

And we're going through a few long term charts to prove that.

On this channel, we have covered one of the critical historical precedents to conservatively understand how much higher the Official US gold reserves need to climb to meet a conservative often historically breached threshold for re-solidifying confidence in the sovereign circulating currency of issuance.

We have left links to those videos in this video’s youtube comment section if you missed them.

But for now, let's quickly hear the words of a highly creepy but intelligent investor, who back in late 2010 had some insights on where gold was ultimately headed by the end of this Post World War 2 debt supercycle.

What the often despised investor, George Soros, was getting back in late in 2010. Was that gold's valuation mega run higher is the end of this process, the final ultimate financial bubble of this debt super-cycle.

A lifelong skill in investing is after you have acquired your position at much lower valuations, eventually have many, many others, agree with you with their capital.

One must learn to identify and sell what is overvalued, and perhaps reinvest those proceeds into undervalued investments on the eventual upswing. 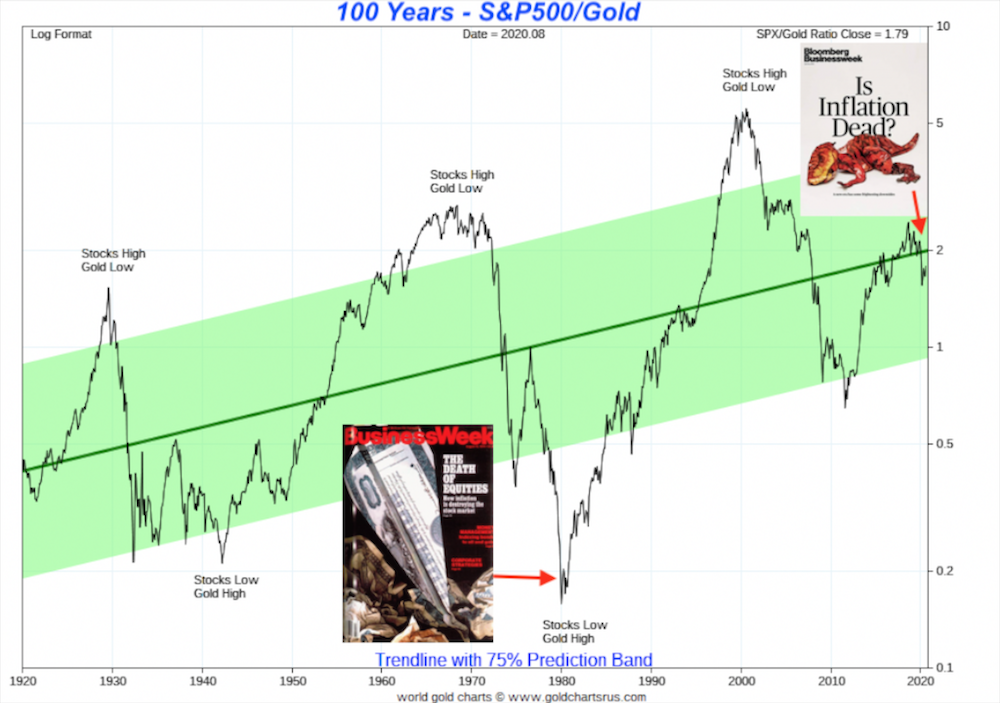 For example, this 100-year chart above shows the US stock market's S&P 500 index divided by the spot price of gold at the time.

In late 1979, Business Week magazine ran a title that essentially pronounced the Death of Stocks.

That was the famous contrarian signpost looking backward, to go long US stocks for the next two decades.

Here is another recent cover they ran, which yells inflation is coming this decade into the next.

If you stare and let your eyes go blurry, an increasingly obvious three-wave pattern is clear on this 100-year chart. Once the high stock valuation waves of 1929, the late 1960s, and the early 2000s crashed, they tended to then rebound in a dead cat bounce formation. Ultimately later to then, be forced to roll over and bottom versus gold no matter how much market intervention occurs along the way.

For me, this chart screams that the old 2011 spike low is going to pass soon enough, and we'll likely pass the 0.5 before peaks in increasing valuation versus the S&P 500 index.

Remember that this week the S&P 500 closed at 3,340. You can do the math in terms of where gold is likely headed, respectively.

We are moving onwards to US bonds and real interest rates throughout this full fiat Federal Reserve note era. 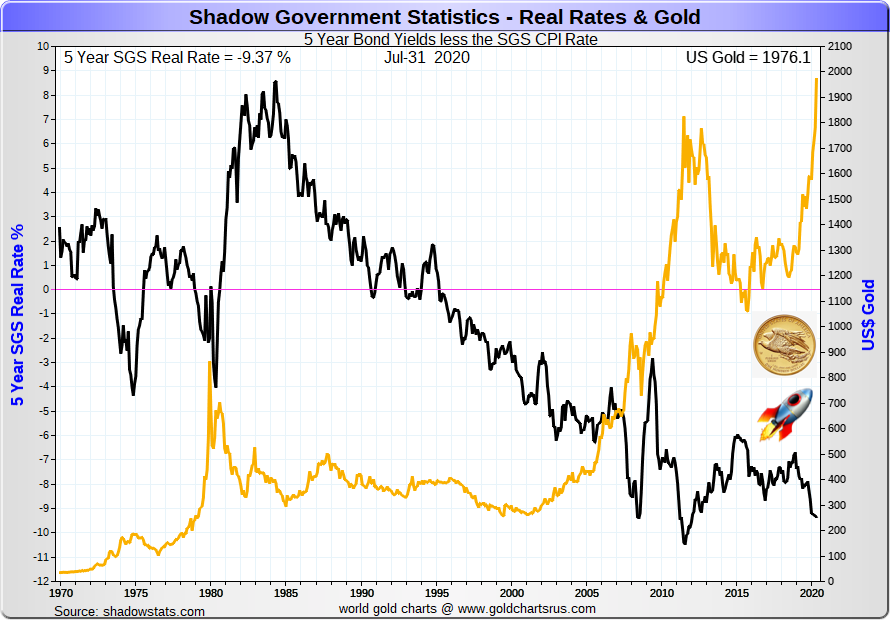 The chart above uses the old pre-1980 methodology for measuring current price inflation ongoing versus five year US bond yields. There we see that US interest rates would have to be near 10% right now to cover the current continued debasement of the fiat Federal Reserve note.

We currently have a hard US debt level of over $26 trillion, hence why we also have near 5,000-year low-interest rates, it is for real reasons. If instead of near-zero, we had 10% interest rates today. That would only be about half of where the Federal Funds rate got to in 1980; the US government would be paying out more than $2.6 trillion in hard debt interest payments and much more in underfunded programs like social security and government pensions, etc. All the taxes would go to pay interest on the ballooning debt simply.

It is not going to happen.

Instead, what is more than likely going to happen is the supposed least effort required, perhaps the most dishonest way out.

In the meantime, the gap that we see widening on this chart above is rocket fuel to higher gold prices, and a raging commodity bull market with higher inflation to likely follow for years to come.

I do not expect we will again see positive real interest rates this decade (the 2020s) nor in the next (the 2030s).

The final charts below are for our real estate interested stackers. 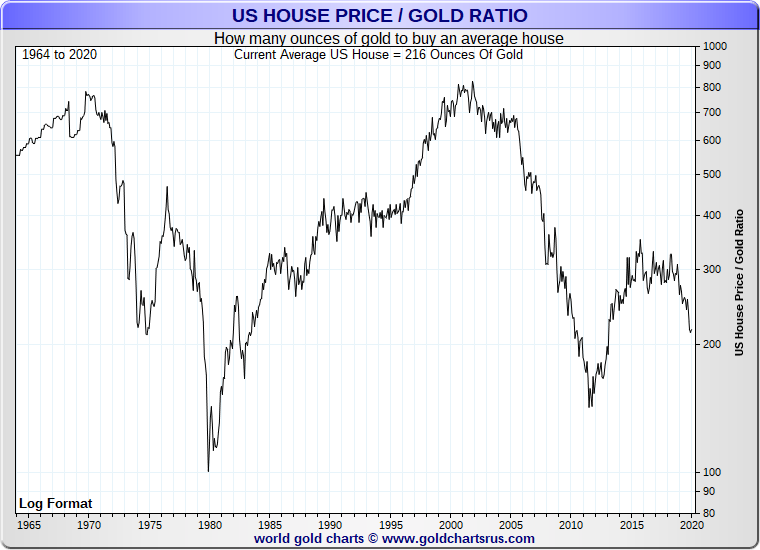 Obviously, with current housing loan rates hitting record all-time low levels, there has been a recent flurry in US home buying.

I presume many of these buyers believe with increasing inflation to come, paying off their mortgages will become less costly in real value terms as years progress, so long as their income can keep up with rising inflation.

Above in the chart is where we are today, and the old 2011 spike low will likely get surpassed in the years to come.

This phenomenon not merely in gold, but too in silver vs. average US house values as well. 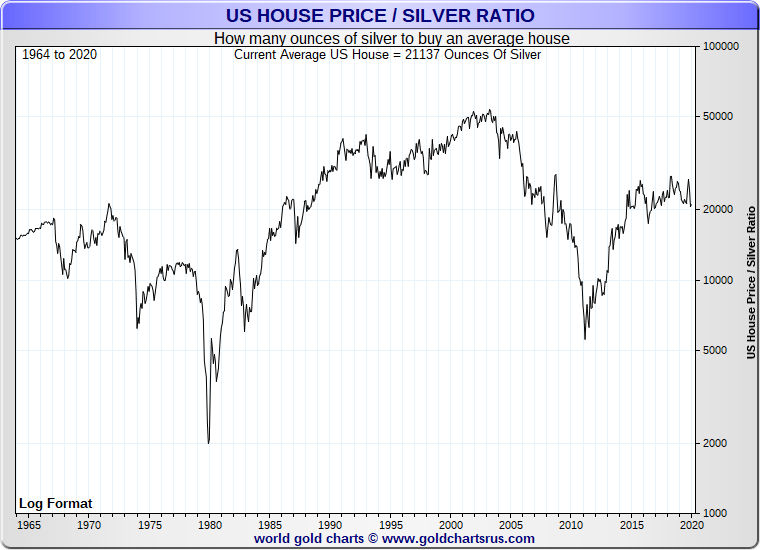 I know you might doubt my confident statements here.

But just have a look at the Australian housing market valued by gold at the moment.

Not only has it Wile E Coyote’d past its old 2011 level, but it looks like someday soon enough, 100 oz of gold bullion will get you an average house, down under. 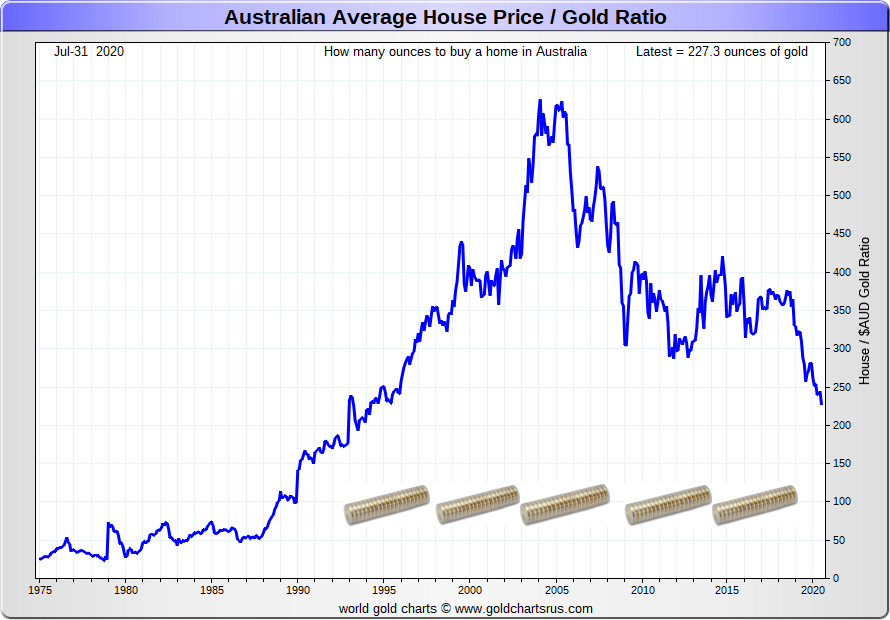 Many more valuation factors, sentiment indicators, and systematic structural changes are required before I even seriously consider selling any of my precious physical metals positions.

Indeed, we still have a long and exciting road high ahead. At $2,000 oz gold bullion, and silver bullion acquired below $50 oz denominated in full fiat Federal Reserve notes. They both should remain some reliable stores of value in the inflationary decades upcoming. 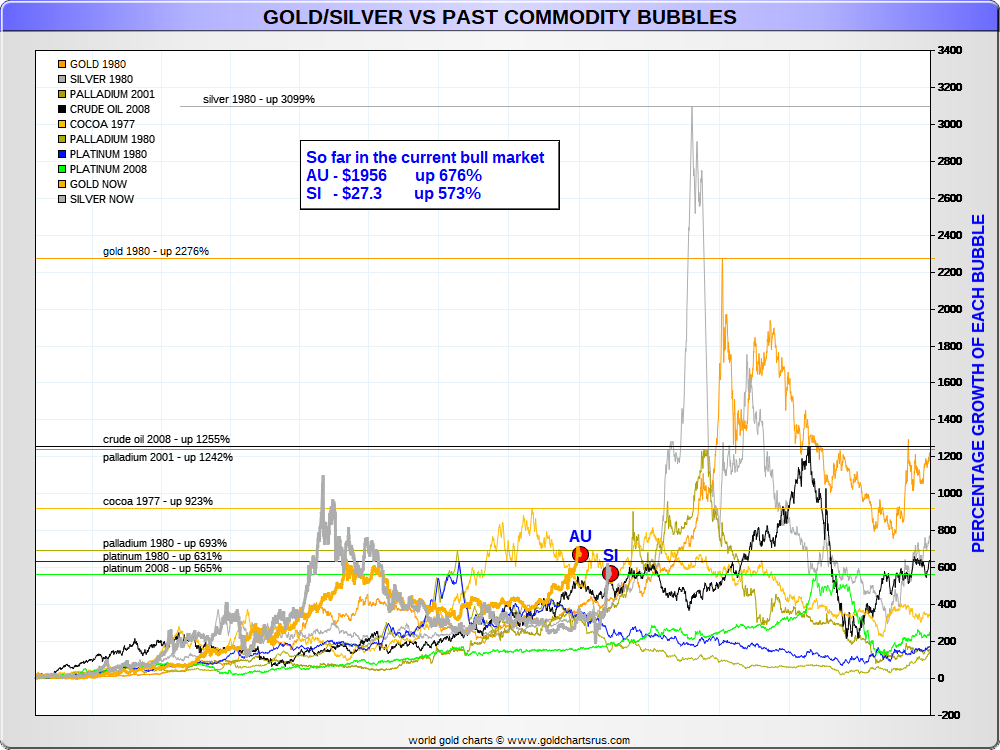 That all said, decisions about when or if to sell any bullion are personal and unique to everyone.

I do not profess to have a crystal ball, and no one can tell you the top of the coming mania price peaks.

But just as we acquired bullion diligently with patience over time, so too will I try to keep you all informed of my valuation insights. For now, matter reallocations to come as bullion values rise versus other assets classes, always maintaining a prudent position in bullion is a lifelong mandate for foundational wealth to be passed on.

That is all for this week.  Take great care of yourselves and those you love.