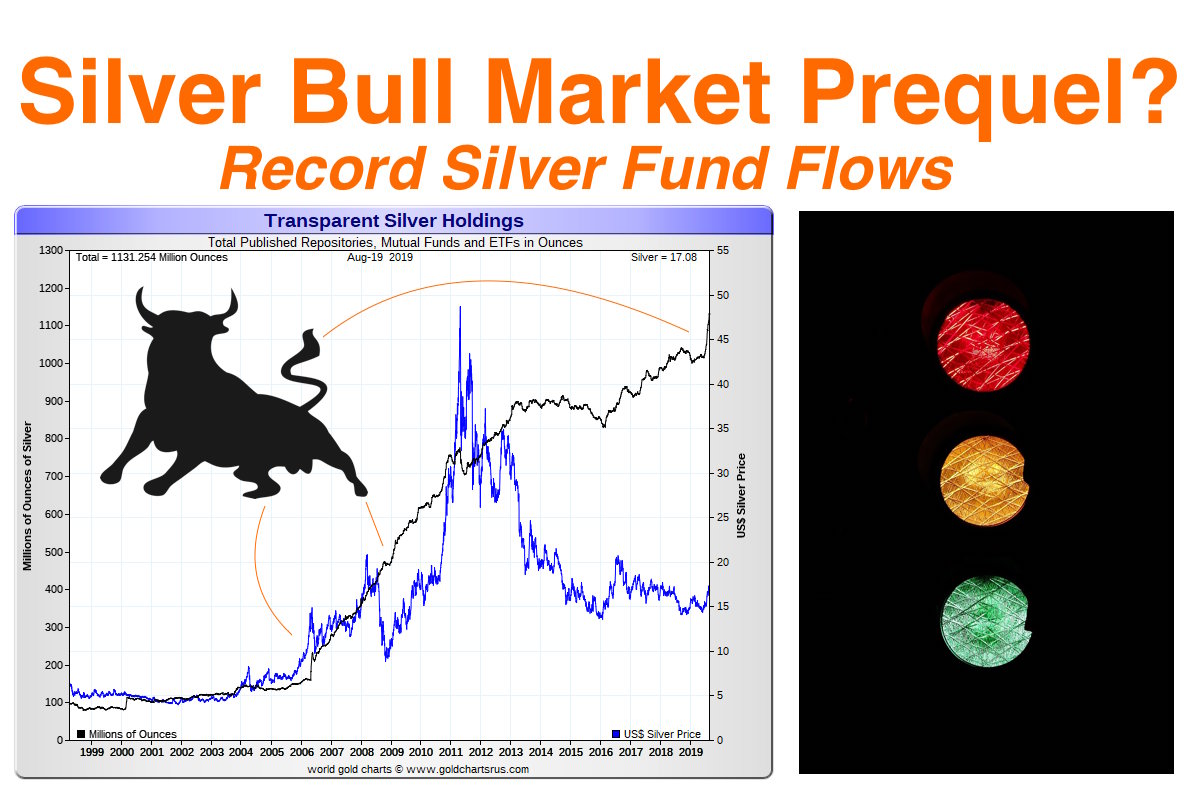 What do quick historic bursts in transparent silver holdings historically portend for silver spot prices to follow? Can silver price forecasts be made using this silver market data?

Over the last 3-month's time, a record amount of silver bullion has flowed into mostly silver derivative funds and exchanges.

Here we put this new three-month +110 million ounce silver bullion flow into historical context. What might this pre tell for silver spot prices to come?

How has the silver price reacted historically when we outsized flows of silver investor interest produced inflows of silver bullion into the transparent silver funds and depository vaults?

The most prominent silver derivative (SLV), has been catching giant silver investment fund flows — adding over 68 million troy ounces of silver bullion since the start of June 2019 to now (learn more about Silver Bullion vs. Silver ETF pro cons here).

To put this current record-sized net positive silver fund flows into context. Even the record-high sales year for the world's most popular silver bullion coin the US Mint's Silver Eagle coin was 47 million ounces in 2015.

Where in silver bull market context might all this bullish silver action eventually fit? The Hunt Brothers have to be jealous yet again.

What might these record-sized silver investor fund flows mean for silver prices to come?

How did silver prices react in the past when we saw similar events?

Silver Bull Market Prequel | 3 Smart Money Flows of the Past 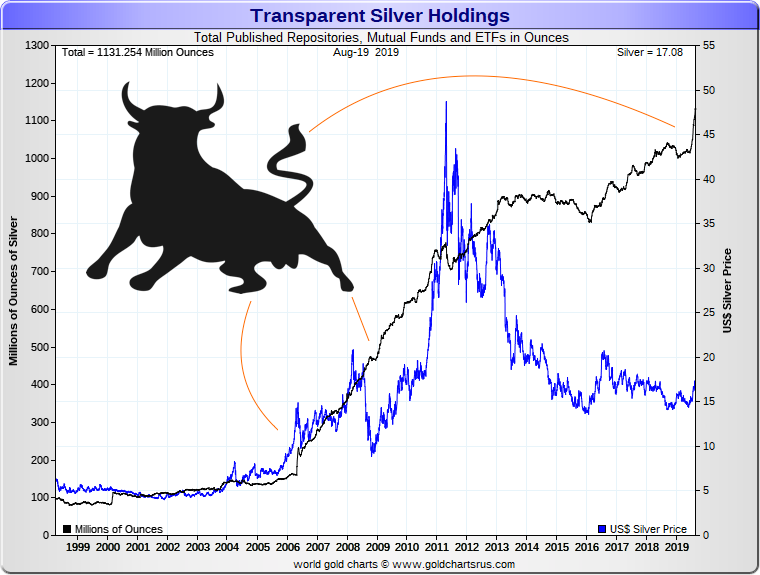 Although not illustrated, perhaps begin by looking at the year 2000's jump in silver bullion fund flows.

Perhaps that was the smartest money moving out of the Dotcom stock bubble into hard undervalued assets?

Move along to the year 2006, when then silver buyer Warren Buffet and his Berkshire Hathway holding company sold off their later record-sized private silver bullion hoard of 129.7 million ounces. Those same silver bullion bars likely ended up being the precious silver bullion bars used to start this aforementioned silver derivative fund called SLV.

That jump in silver bullion inventory available to the market likely caused a quick selloff in the silver spot price, but also quickly preceded a silver price run in 2006 from about $10 oz to the $21 oz price high for silver in early 2008.

After the global financial crisis of late 2008 caused a silver derivative and silver futures contract selloff strong enough to drive the silver spot price to the low $9 oz price point.

We saw massive inflows of silver bullion into SLV and other transparent silver funds, depositories, and exchanges beginning and preceding the price run start for silver in early 2009.

Perhaps the year for silver prices in 2015, one in which some 25% of physical silver supply went to silver investor bullion hoards only, was a bit early. Although the silver price run first half of 2016 was dominant, it was shortlived.

Outsized net positive physical silver buying from Indian and western silver bullion buyers in 2015, did not get matched by significant money funds beyond middle 2016. Those the often short-lived silver bulls who trade in the silver derivatives markets as opposed to buy and hold silver bullion stackers. They had their losses handed to them by the second half of 2016 in terms of silver spot prices falling (see Transparent Silver Fund chart above to confirm that fact).

Like it or not, it is outsized silver 'smart money' fund flows that typically dictate the trend for silver spot prices. If they are not outsized but merely gradual, silver spot prices can fall in short to medium term. It is the recent outsized flow into silver derivatives that has us thinking bullishly for silver prices to come.

Now's nearly three-month +110 million ounce flow into silver funds like SLV perhaps portends much higher silver spot prices to come. Potentially we are on the cusp of undertaking a multi-year run of higher spot silver prices.

For those silver bullion bulls who have been stacking diligently since the last significant run in silver prices, the 2020s could be very rewarding.

To learn some best practices for buying silver or selling silver, be sure to pick up our free SD Bullion Guide before you go.