We're about to dive into details of that topic and more.

Hello this is James Anderson on behalf of SDBullion.com

I'm pretty confident you are going to like this bullion market update.

So please, help me hack the algorithm on this platform, by smashing the Like button so that others interested in financial markets
might also learn about the unprecedented movements happening and low-key building beneath the surface in both global silver and gold markets.

We are about to dig into ongoing details of a building and historically large delivery month in the CME Group's COMEX silver futures contract trading market.

As well, we'll have a look at further gargantuan flows of silver going into a few of the major exchange-traded funds of late.

But first, let me start by giving us all a visual context for the underlying silver bullion numbers we are about to cover.

This image was taken in the year 1995 and it is courtesy of the CPM Group. In the image, one can directly eyeball about 2 million ounces of silver bullion bars. If you add up the inferred silver bullion sitting on those pallets not reflecting the light within the warehouse, perhaps conservatively we are looking at 5 million ounces total held by all the wooden pallets.

We used this vintage silver warehouse shot late last year in a video where we estimated a bullion aboveground answer to the question, "How Much Silver is in the World?"

We'll leave a link to that video at the end of this week's update in case you missed it.

You'll probably want to know the information in that video too because it deals with the last time we had over 200 million ounces of silver bullion bars get drained from the Comex warehouse system in the matter of a few short years.

Back to this image, it shows about 250 pallets of non-homogenous industrial-sized 1,000 oz silver bullion bars stacked on top of one another. Every silver bar you see weighs about 70 lbs each.

Each time we refer back to this image in this week's update, remember it represents about 5 million ounces of silver bullion.

This week, you get to see fresh and unprecedented Comex Silver stopped contract delivery data building now too. 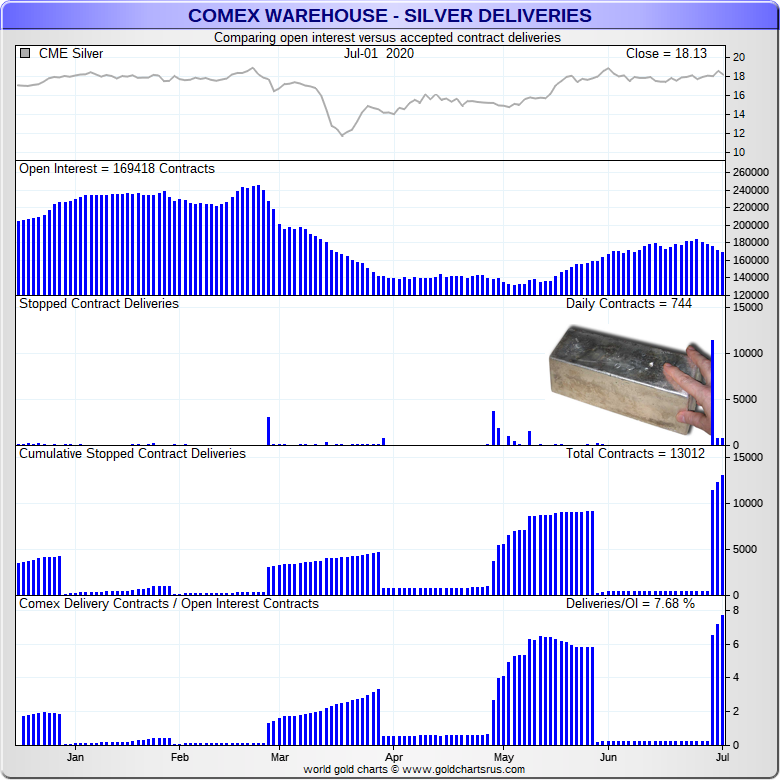 Of which, alleged RICO precious metals trading desk of JP Morgan is involved in more than half of them, dominating the Comex silver trading game like former CFTC commissioner Bart Chilton admitted on record they did before passing away last year in 2019.

According to the CFTC, the 2020 spot-month limit is 3,000 COMEX silver contracts per trader. There is also a host of exemptions which surely they would cite if pressed for why they allow JP Morgan to on face value flaunt nearly two times the position limits sizes the CFTC claims to regulate.

But let's digress back to the size of these recent Comex silver stopped contracts.

And the growing now over 13,000 stopped contracts equates to 65 million ounces of potential silver bullion. Of course, we will see how much will be delivered physically and then withdraw from the COMEX fractional silver reserve pile. But this record 65 million ounce stopped contract month potentially represents about 13 of these silver bar stashes sitting in COMEX warehouses.

In one day alone this past week updated on June 30, 2020, over 10 million ounces of silver went into three of these ETFs. Look far left to the escalating chart's silver stashes spiking higher.

That's basically two of these in one day of inflows.

Just now I looked at the July 1st update and another over 5 million ounces flowing mainly into another silver ETF.

So another one of these rooms trucked into silver ETF stashes in just one day of time this past week.

For additional context, think of it, the world's most bought and sold silver bullion coin's sales this year to date, and nearly the entire year's amount or the one before that just went into a handful of silver ETFs in a smattering of a couple of days this past week.

I cannot stress enough, how ridiculously large these data points and inflows have become relative to the silver market's history.

Looking ahead, the now melded Federal Reserve and US Treasury have been publicly hinting that more currency creators go BRRR infinite bailouts are likely ahead. Especially now that the viral crisis continues to numerically ramp through the United States and further lockdowns following restarts are happening and to be expected ahead.

People are still without work to the tune of almost half the adult US population.

And world trade is now a train wreck near standstill. The bankruptcy wall of the hurricane has yet to fully hit. There will be more fiat currency bailouts worldwide and central balance sheets are only generally ramping in one direction, up.

Remember too, that in 2015 the CME Group made a sly rule change which at near the bottom of the cyclical bear in silver and gold prices, established potentially explosive future daily price volatility on its COMEX NYMEX price discovery markets. We've already seen it in Palladium.

The CME Group COMEX NYMEX did not establish these massive daily price fluctuation limits for fun, more so for volatility protection for what is likely coming sooner than might think.

And it now looks very likely that off this QE infinity and economic lockdown depression, that gold is going to climb out its cup formation sooner than later. And both silver and platinum will begin forming the other side of their cup formations to come.

The literal CEO of the COMEX NYMEX only a few years back mentioned the following on the FOX Business channel.

Duffy is not going to risk his lucrative lifestyle talking like a crazed gold bugger on TV. Rather he said these gold should price at points to cover himself when the precious metals and the commodity meetup begins ripping higher, as the fiat Federal Reserve note goes into a massive secular bear market likely later this decade.

We are in the midst of unprecedented times. It will come as no surprise to see precious metal values ramp and rip higher reflect all this and much more, in the coming years ahead.

That is all for this week. US viewers have an exception and safe 4th of July holiday weekend. And to the rest of you around, we wish you and yours the very best.