Ultimately the devaluation of the fiat Federal Reserve note’s purchasing power is likely our easiest way out of the record debt and unfunded liability mess we have increasingly grown since Kyle Bass spoke these pointed words in November 2011.

Bombastic bearish fiat Fed note headlines such as this by mainstream economists on mainstream financial media merely is conditioning us all for the coming fiat Fed note devaluation endgame of the debt supercycle.

We are now in an increasing new Cold War state of affairs with China and the Russian Federation.

Regardless of what side of the political aisle we are on, it matters not in fiat decree policy. 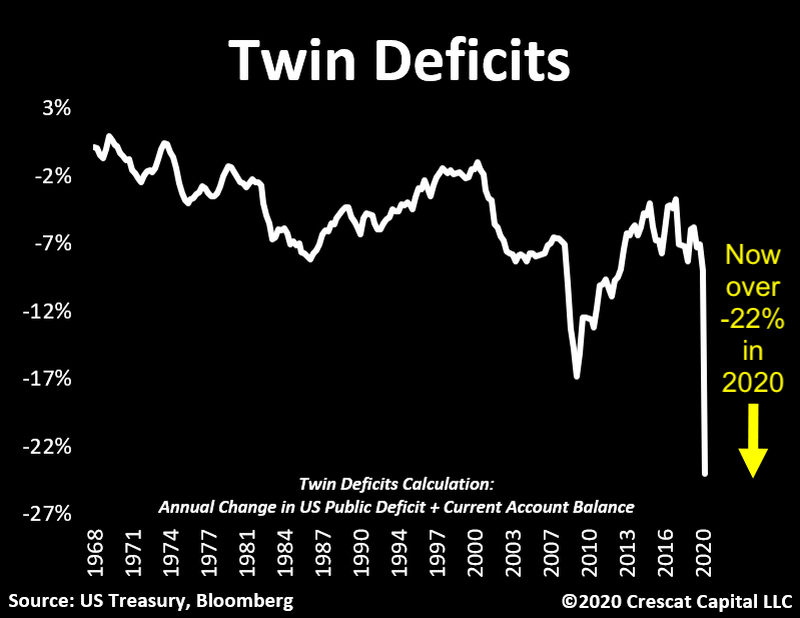 All US Presidential administrations and their Treasury Secretaries increasingly in this 21st Century, use the power of the still dominate fiat Federal Reserve note and financial plumbing as a tool to administer economic and geostrategic policies globally and ongoing.

Starting this past week, US President Donald Trump had the following to say at a campaign rally, right in the American rust belt in Dayton, Ohio, regarding some of these topics.

Suppose you have been patiently waiting for price pullbacks in the silver, platinum, and gold markets. Well, this past week was a substantial time to start nibbling on additional positions.

Stay tuned towards this week’s update ending, as we examine recent analog history to try and opine how much further the gold and silver markets may fall in the coming weeks and perhaps next month leading into the early November 2020 US Presidential election.

But first, the cynics have been proven correct again. Price discovery and financial market rigging continue to be a profitable too big to fail, commercial bank business model.

JP Morgan is only going to have to pay a $1 billion fiat Fed Note fine for manipulating the precious metals market for over a decade since taking over the bankrupt naked silver shorting desk of Lehman Brothers in the spring of 2008.

In other words, anyone who thinks the rule of law applies to those at the highest levels of capital and government cronyism should pause on any the following damning facts.

Just last week, we covered how Deutsche Bank was rigging gold and silver markets for years, how the practice was “so commonplace” that a former trader turned state’s witness says he figured, rigging commodity price discovery markets was A-ok.

Who could blame them, right?! Scotia Bank, HSBC, UBS, we’ve covered many of their alleged precious metals market crimes and their physical bullion short upcoming here over the last few years.

No one has gone to prison. Unsecured bank shareholder dupes are the ones who pay any fines.

Programs like the CME Group’s CBIP, active since the year 2013, which state that approved foreign central banks can come into our commodity and financial derivatives markets and receive high volume trading discounts. Not hard to imagine that they move derivative and commodity prices accordingly to their agendas while likely using proxy commercial bank desk trading vendors as their cover.

In other words, the ongoing criminality runs to the tops and is highly interlaced.

And it’s going to end predictably with more physical shortages of critical commodities due to rigged phony suppressed price signals. Look at the palladium market over the last few years; something akin is coming, in my opinion, to the gold, silver, and platinum markets.

Faith in fiat decrees and increasingly criminal institutions will only erode further with news such as this.

Precious metals industry colleague Craig Hemke of TF Metals Report, this past week, tweeted doubts on the world’s largest silver ETF, overseen by JP Morgan. Much of it supposedly within their supposed silver vaults likely located in the seemingly lawless City of London.

Suppose you are using SLV as a short term swing trading derivative, good luck. But perhaps you might also consider this SD Bullion Silver ETF article I wrote on the matter just over a year ago. One which spells out the then yearly management fees for various silver ETFs and of which only a select few, might you as an unsecured creditor, perhaps take physical silver bullion redemption with nearly 70-pound a piece, nonhomogenous 1,000 oz silver bullion bars.

With SLV, no physical redemption, and not bullion shortage upside premium arbitrage either.

Let us move on to the inevitable infinite QE and Federal Reserve balance sheet expansion resumptions ahead.

The outperforming team over at Crescat Capital has some interesting charts to share with the world this week.

The red-colored line is foreigners and their decreasing percentage of our IOU holdings.

The white-colored line is the private Central Bank creating currency out of thin air to now own over 1/5th of our collective IOU units and growing.

Tavi Costa of Crescat Capital points out that “about $8.5 TRILLION of US treasuries will be maturing in the next 12 months.”

So the Federal Reserve’s balance sheet balloting from now $7 trillion to over $10 trillion fiat USD soon enough, given some of these 2020 into and through 2021 factors mentioned.

Here are further Crescat Capital points on what to look for in the coming year and months through 2021 and beyond.

So finally, as promised, let’s take a gander at this current gold and silver price pullback in a similar and longer context.

For roughly six years leading into this post, infinite QE silver price ramps the $20 an ounce mark was stubborn resistance.

It’s possible, not saying it is probable, we could see further falls to come in October.

If there are massive sell-offs in the US stock market, and further long liquidations in the precious metals derivative complex, even the teens in spot silver could be in play. The bullion market will likely again dry up, and premiums would blow out again.

If you are looking to add to your bullion positions, buy-in tranches perhaps, but do not wait too long. The infinite QE and Federal Reserve balance sheet expansion policies of late 2009 into the year 2010 should rhyme louder to come.

At some point again soon enough, silver will take off like a rocket.

Move now over to gold, some illustrative technical points we can gander off other major gold price breakouts.

How those charts reacted after their recent record gold price highs is instructive.

Once a new record gold price in euros was recently hit, see the subsequent fall and price consolidation, which monthly followed. Now, where are they? Oh yea, bull market breakout mode.

How about the once 12 troy ounce silver sterling now full fiat British pound.

And finally, what about our neighbors up north?

Here is where we are in the USA headed into the historical stock market volatile month October, as the legit viral bankruptcy phase has yet to take its lasting toll, and potential US election chaos bears down.

That is all for this week. Thank you for coming by.

Please share this video, and take great care of those that you love.