And you all are failing at both of those charges here in the year 2020.

Since the US Congress essentially had a coup with the passing of the Federal Reserve Act on December 23rd, 1913.

The sovereign Constitutional stores of the value of our nation (gold and silver), have gained tremendous value over the last 107 or so years versus inferior currencies designed to lose value over the long haul.

The fiat Federal Reserve note has literally lost -99% of its value to gold since 1913.

How much longer for that final 1% of devaluation to come?

The labor force participation rate remains at about 61%, near early 1970 levels, back when we made the final default on the post World War Two Bretton Woods agreement. We were running out of gold to ship to foreigners who did not want to get paid out in our further debasing script.

As we think about prices for things we most need, like healthcare, child care, higher education, and training. Prices have not been stable for some time now, rather much of our price inflation ongoing has been masked by productivity gains and technological advances.

The Fed still this week reiterated they want 2% inflation and interest rates are not going back up until the consumer price inflation data at the BLS says we have price increases over two percent per year.

And the final charge here for the Federal Reserve, where it reads "and moderate long term interest rates". Well, it depends on how we define the word moderate. There is certainly nothing average about these near 5,000-year low-interest-rate levels. 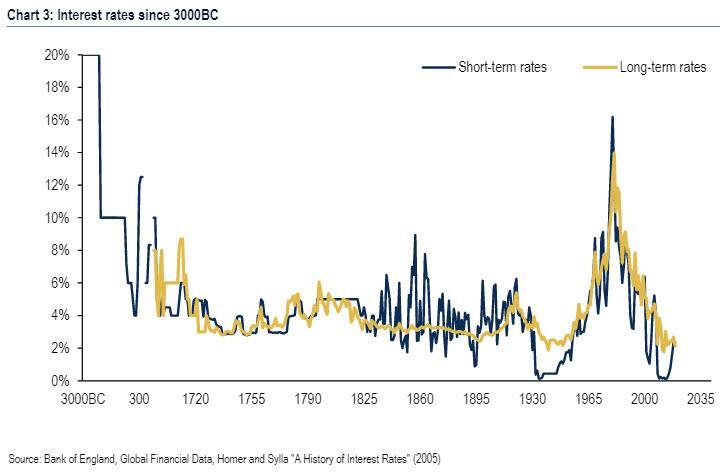 So the Fed is going to pin the interest rate near 0% for years to come, at the same time they want some hot inflation. A nice recipe for a raging gold bullion bull market unfolding.

Hello there. On behalf of SD Bullion, this is James Anderson. And this week we're going to dig into some dastardly details of gold and silver price rigging this past decade-plus.

So a bit of gold and silver price rigging news this week.

And no it's not the same alleged RICO criminal precious metals desk that continues adding millions of ounces of silver into its record-breaking .999 fine silver bullion bar pile.

No, we have done various insightful videos on that bank and the criminal lawsuit ongoing against them.

But this week we are going to be talking about Deutsche Bank precious metals price rigging as this alleged criminal is going to be our star witness for the week. David Liew left digital transcripts, literally written records of his financial market crimes over many years of many of time while trading silver and gold markets at that fragile commercial bank.

Nick Laird over at GoldChartRUs dot com overlaid the market rigging traded chat transcripts with the gold and silver spot price from 2007 through 2013.

And not surprising, the silver version of this price rigging documentation was even more intense.

Each little magnifying glass icon is another transcript amongst the law-breaking traders. Here is a chat room exchange amongst commercial bank silver derivative traders working at competing banks back in 2010.

I am sure this will not be surprising to anyone who has been investing in the precious metals sector over the last dozen years.

On this youtube channel, we have documented how both the COMEX and seemingly lawless City of London bullion and derivative markets have been active in suppressing the prices for both gold and silver for decades compounding.

The video above goes into a thorough explanation of some of the East vs Western full fiat currency era charts we are about to speed through to close this week's bullion market update.

Obviously, at the moment, we are in a sideways price consolidation as we await for silver and gold spot prices to begin re-climbing likely later this year.

For now, I want you to see how the eastern trading hours have priced gold and silver over the last 5 decades of time.

Warning, the following charts are sometimes hard for people to understand. You may have to press pause and read the explanations to grasp the power of what is being pervaded by the compounding price and trading data.

The London gold price fix was pretty much in from 1975 onwards. It got progressively more ridiculous in the early part of this 21st Century bullion bull market. Essentially those on the inside of it were allowed to rig the price of gold lower for their benefit over everyone else. Kind of like Deutsche Bank's David Liew's take that price rigging was "so commonplace" it was easy to rationalize and set on repeat for years unfolding.

The compounded eastern gold trading price is now at $21,667 full fiat US dollar per troy ounce. 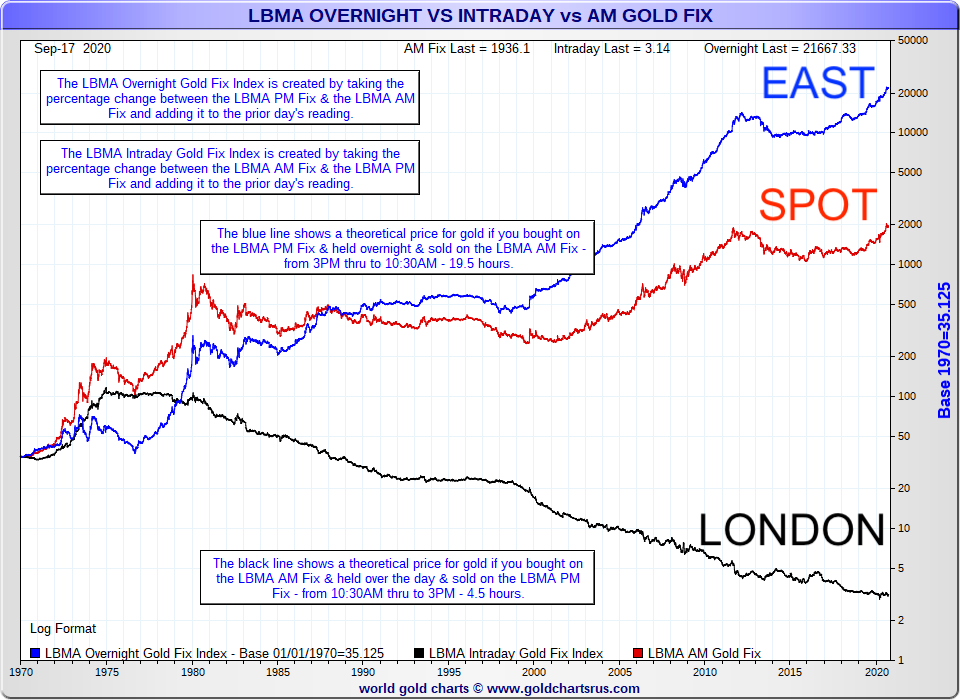 This chart says to me the value of gold bullion today conservatively should likely be around five to ten times stronger than it currently is.

Moving on, gold trading hours during COMEX Market hours ever since the COMEX began trading gold futures contracts. On this channel, we have documented the late 1974 US Treasury cables document a meeting with the then-largest London gold bullion market players.

The original intention of the COMEX was to cut the then raging gold spot price, inject price volatility, in the hopes to dissuade average US citizens from saving private gold bullion over fiat Federal Reserve Notes.

Pretty much ever since 2009 back when China and likely than US Treasury Secretary Tim Geithner made a deal to allow China to divest much of their US debt assets into western gold bullion imports, the blue eastern gold trading line has been rising steadily since. 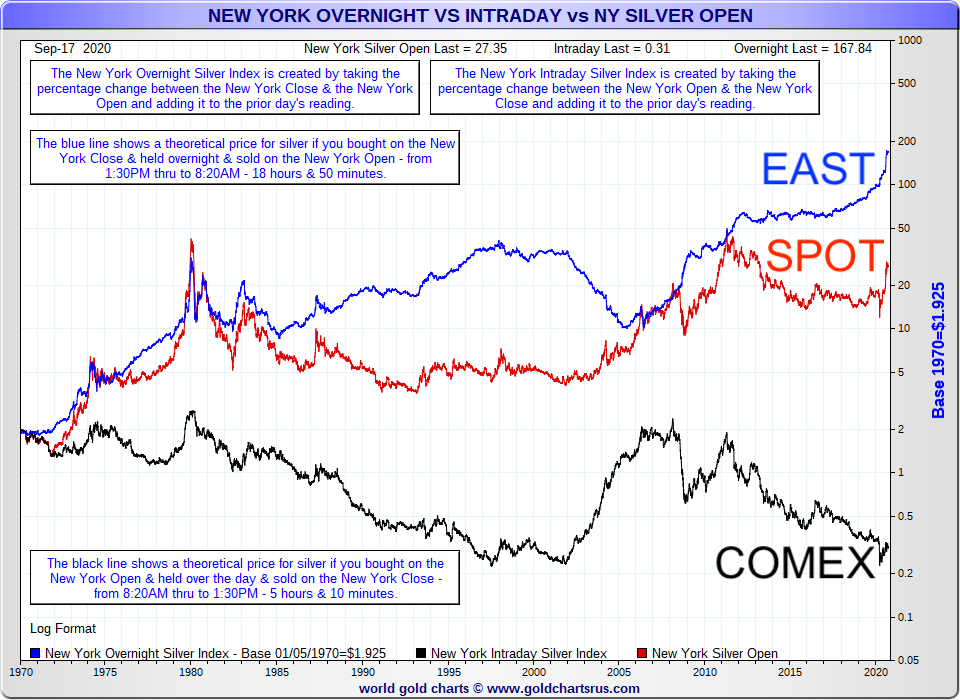 I remain convinced before this silver bull market ends, the red silver spot price line will again catch up with the blue eastern compounding silver price which at the moment is $167.84 per troy ounce.

When the red and blue line begin meeting it will be time to take some profits for those who are considering swing trading some positions in precious metals later this decade perhaps into the next.

For now, silver bullion below fifty and ounce remains in my mind a solid long term store of value as the private Federal Reserve embarks on bond and fiat currency market bubble popping.

These two monetary precious metals are preparing to rage in response.

That is it for this week's update.

Hit the links below, for more information on our bullion market view.

And until next time, take great of yourselves and those that you love.