"Don't look it in the mouth". That's what they say about a gift horse, meaning that you just take it and move along, and right now, I'm pretty sure that if you look up the definition of "gift horse" in the dictionary, you'll find a picture of silver right beside it. From silver's recent highs of, call it, $28, to recent lows of, call it, $23.25, we're talking about a decline of almost 17%. If we really want to get technical about it, from silver's recent intra-day spike high of $29.915 to its current (today's actually) intra-day spike low of $23.22 (so far), we're talking about a decline of over 22%, which, if we want to use Wall Street jargon, means that silver is now technically in a bear market.

That is to say, in just over two months, silver prices have gone from nearly breaking out above $30 to technically in a bear market? Is that even natural?

Regardless, in my opinion, silver bullion is an absolute gift horse right now.

Here's the one-sentence answer: Silver is the ultimate hedge.

And today, I'd like to mention just one of them: The inflation hedge.

You see, everybody is wondering when the next round of stimulus will be approved in Congress, and now, with the Ginsburg death and vacant seat on the Supreme Court, even more people are wondering, and anxiously so, in my opinion. Recall that back at the beginning of September, Gallup shared a poll that showed over 70% of American adults said the Federal government should send another round of Economic Impact Payments to eligible people. Fast forward to yesterday, September 22, and the Financial Times shared its own survey in which almost 90% of Americans say Congress needs to pass another stimulus package. Now, I have been wrong in my timing because I thought the stimulus, the Economic Impact Payments specifically, would begin hitting bank accounts in September, and while September is not over just yet, it looks like I will be wrong on my timing, but I still think the payments are coming soon.

Here's the thing about the Economic Impact Payments: They're highly inflationary.

That is to say, those direct cash payments to the people get spent in the real economy in one way or another, and, anecdotally, as I'm out and about in local stores - department stores, Target, Walmart, and the like - I'm noticing very low stock to no stock of durable goods on everything from linens to kitchen appliances and from furniture to bicycles. The best part about silver in this scenario is not only silver one of the things that can be purchased with said Economic Impact Payments, but silver is money.

It's the perfect hedge, really.

Furthermore, if you believe that the price of silver has actively been suppressed, by governments, by central banks, or by both, then there is a whole lot of fundamental catching-up to do so that silver's price comes in line with real, physical supply and demand factors. Moreover, silver is still, to this day, a country mile from its all-time record high, and when factoring for inflation, silver is a galaxy or two away from all-time record highs.

But it's not just the direct fiscal stimulus that is inflationary. Consider this backdoor inflation, for lack of a better term: US Federal Agencies and Departments are now essentially conducting fiscal spending policy!

Well, here are two real-time examples with the CDC and with the USDA. First, the CDC, Constitutionally or not, has declared a "Halt In Residential Evictions" through the end of this year. If this stands in any way whatsoever, in my opinion, the only way it could even work is if the government directly subsidizes landlords for non-paying tenants, be them out of work, deadbeat, or otherwise. Secondly, the USDA has declared school breakfasts and lunches to be free, for all students, nationwide, through the end of this year. Personally, I didn't even realize this until we got an email from our kid's school district last night announcing that beginning next week, they will be giving all students in the district free meals, but not the "a la carte" stuff, like canned drinks and whatnot. At first, I was wondering if the email was misunderstood as it was brought to my attention, but sure enough, upon looking at the USDA's press release from August 31st, which pretty much flew under the mainstream media's radar with minimal coverage, not only can all students in America get 10 free meals per week through the public schools, but parents and guardians can even pick up the meals for their children without the kids even being present! The bottom line is these are very inflationary measures the government is taking, and remember, when it's the government involved in paying for something, it always costs more, and I say that from my experience as a Sergeant in the United States Army.

Silver is the ultimate hedge against inflation.

And it is so precious, that not even every single person on the planet could have an ounce if they wanted one, yet silver's price was in the low $23s as I fired up my charting platform this morning: 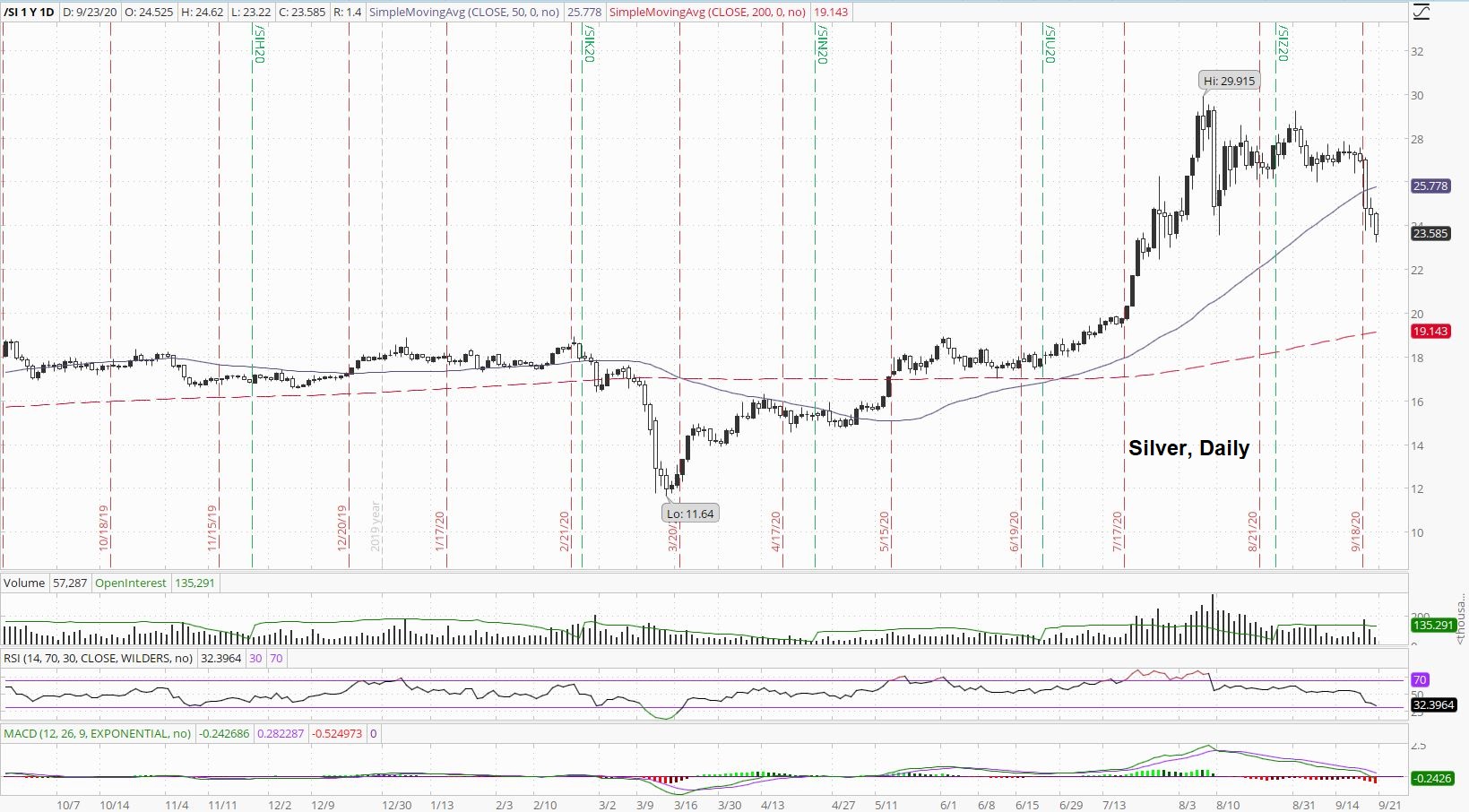 Every single thing in this world is only going up in price, and then there's silver.

It's even a gift horse for those smart stackers and value investors taking advantage of the Gold-to-Silver ratio arbitrage: 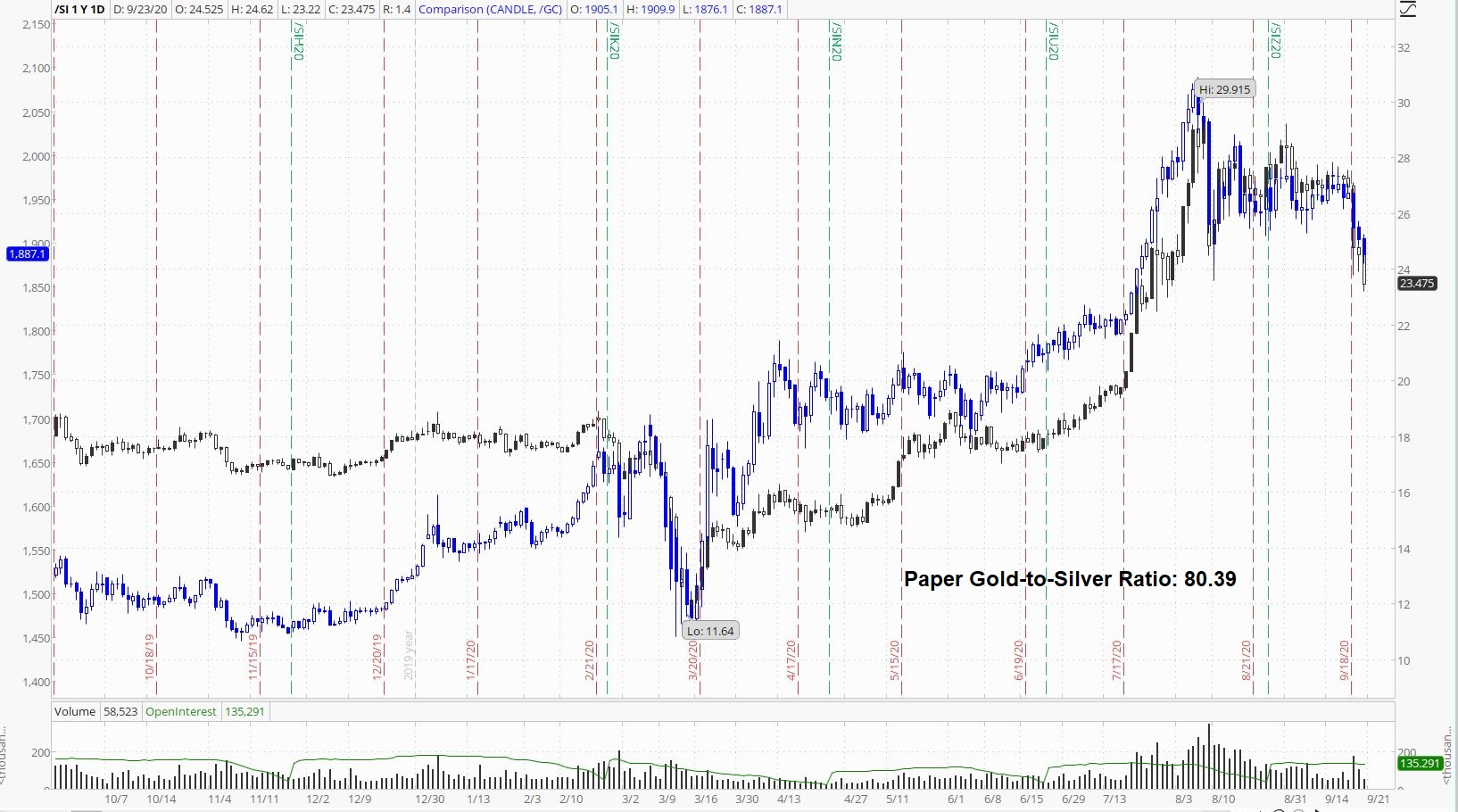 With the ratio spiking to above 80, in my opinion, that's a signal to trade gold for silver, assuming one can get close to the actual 80 ounces as there is a total difference between digits on a screen and the real world. 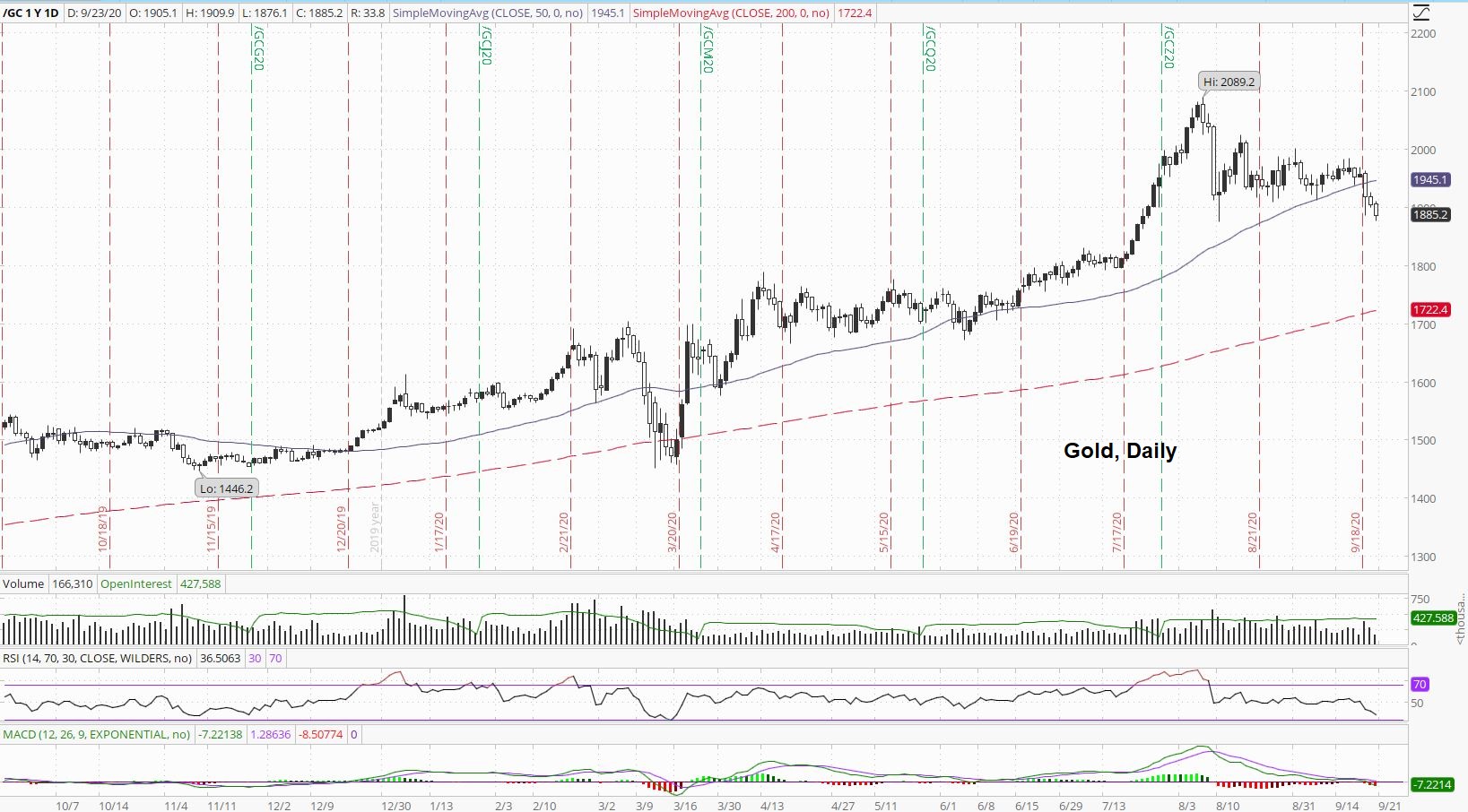 There is nothing new about palladium dancing around its 50-day moving average: 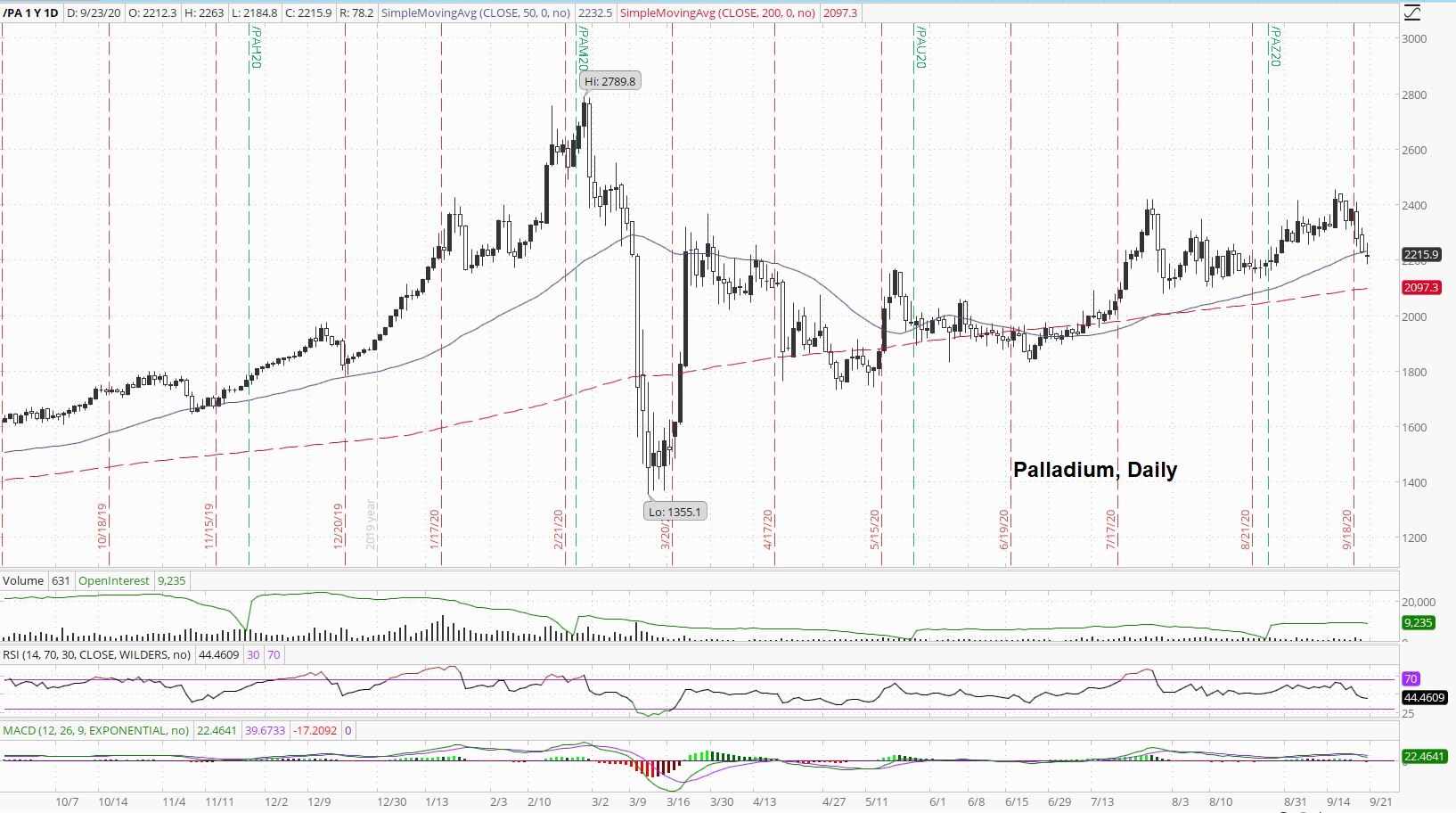 That has been the trend in palladium in recent years. 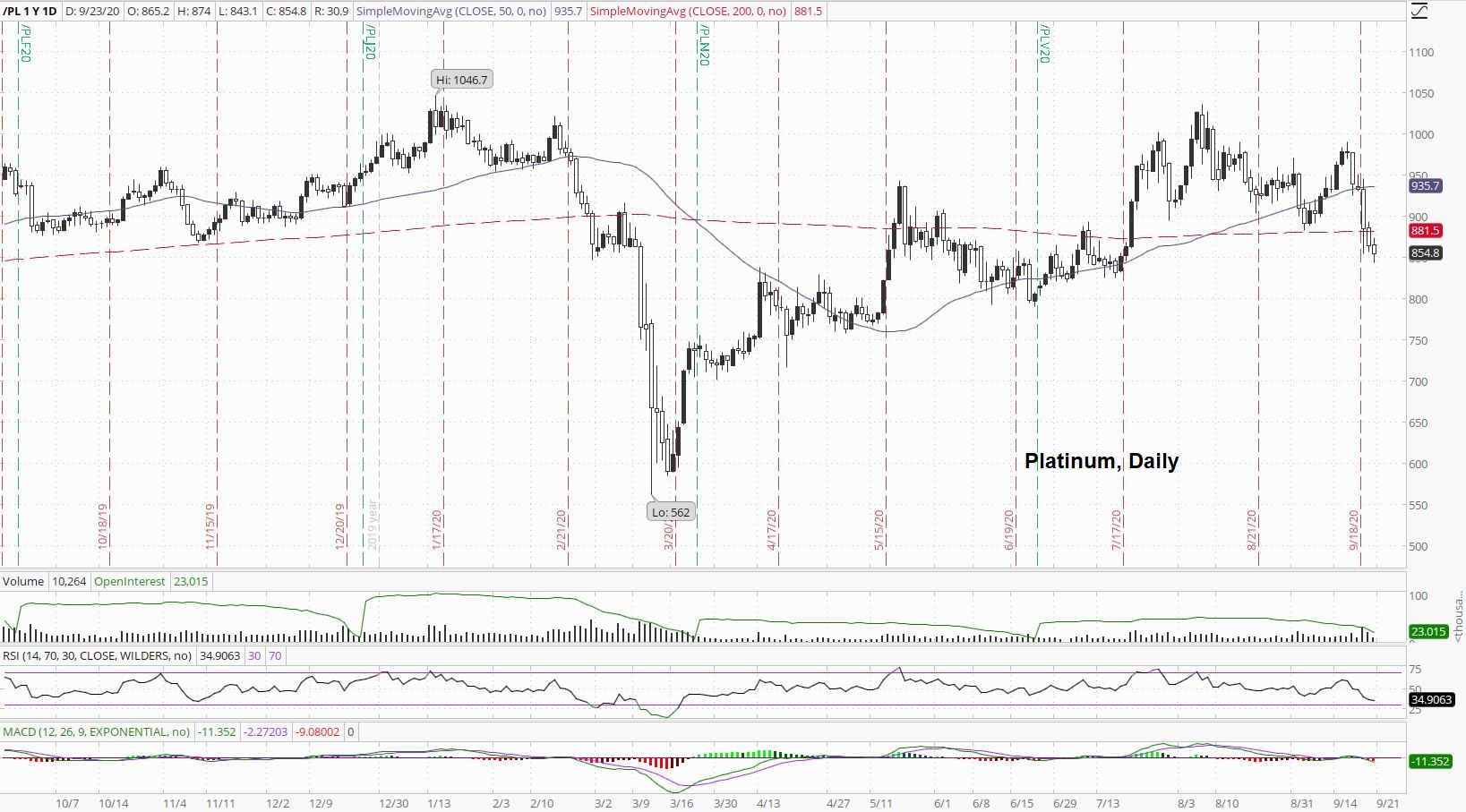 For deeper-pocketed, value investors, platinum has all of the qualities needed to be money, and in my opinion, platinum is a great hedge against inflation, second to only silver.

Copper has not been crashing: 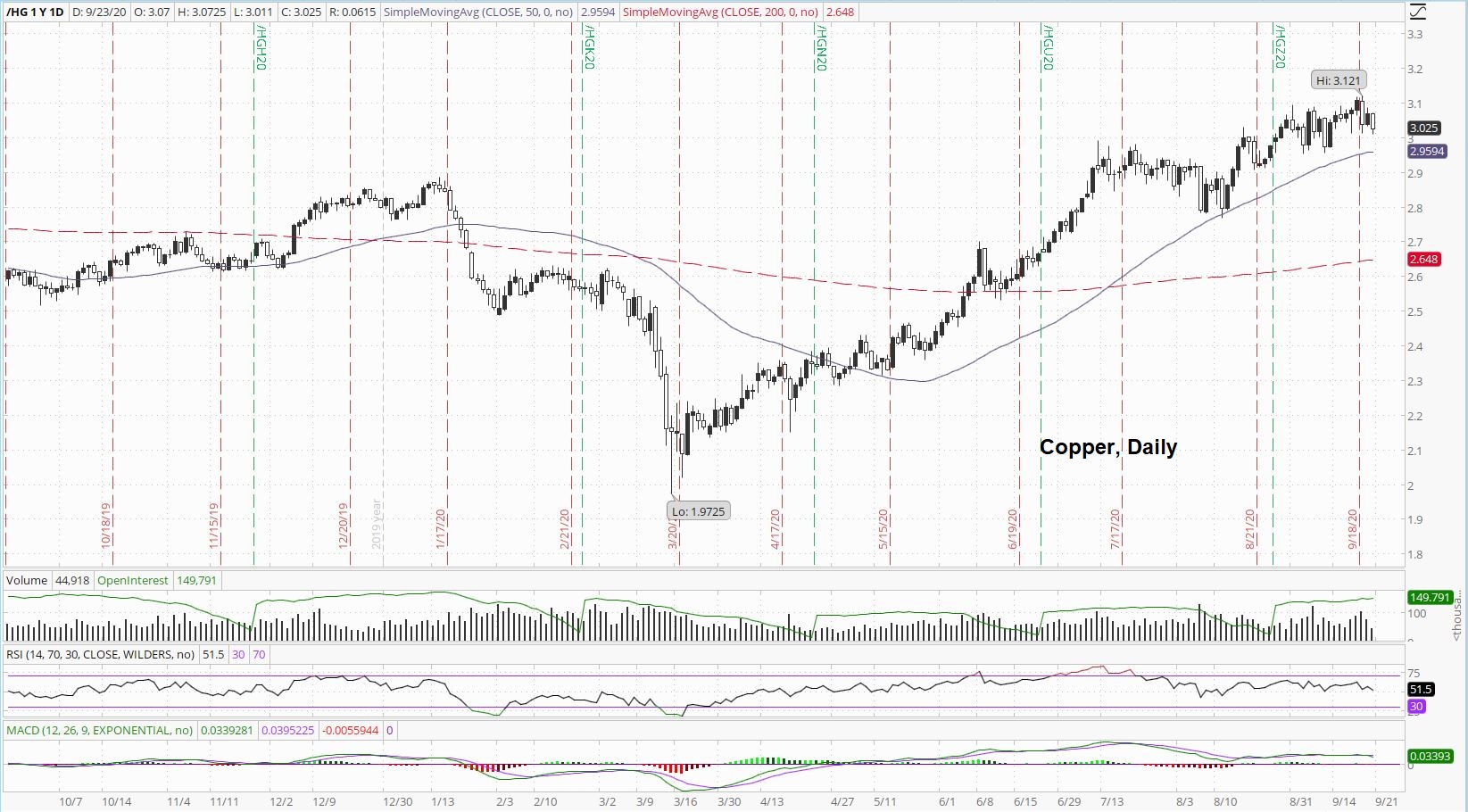 That's telling us something about all of this funny money that's being whipped-up and thrown around.

Crude oil could be telling us the same thing: 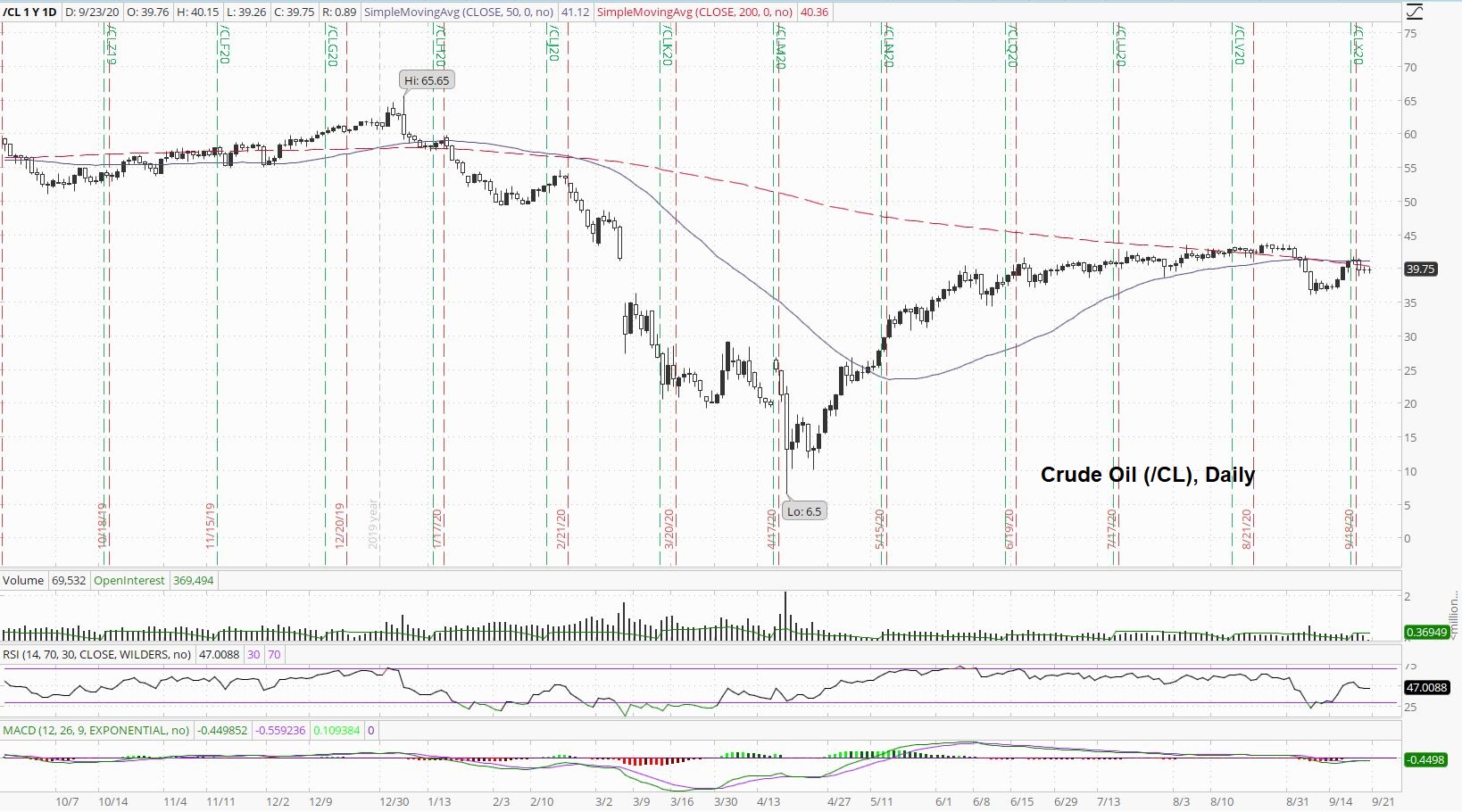 Considering the fact that crude oil has a hard limit to above-ground storage whereas copper does not if crude oil is telling us the same thing as copper, the inflationary pressures are going to be more shock-and-awe than simply "running hot", as the Fed likes to put it.

For all of the talk of a crashing stock market, and the Dow is not even down 7% from recent highs: 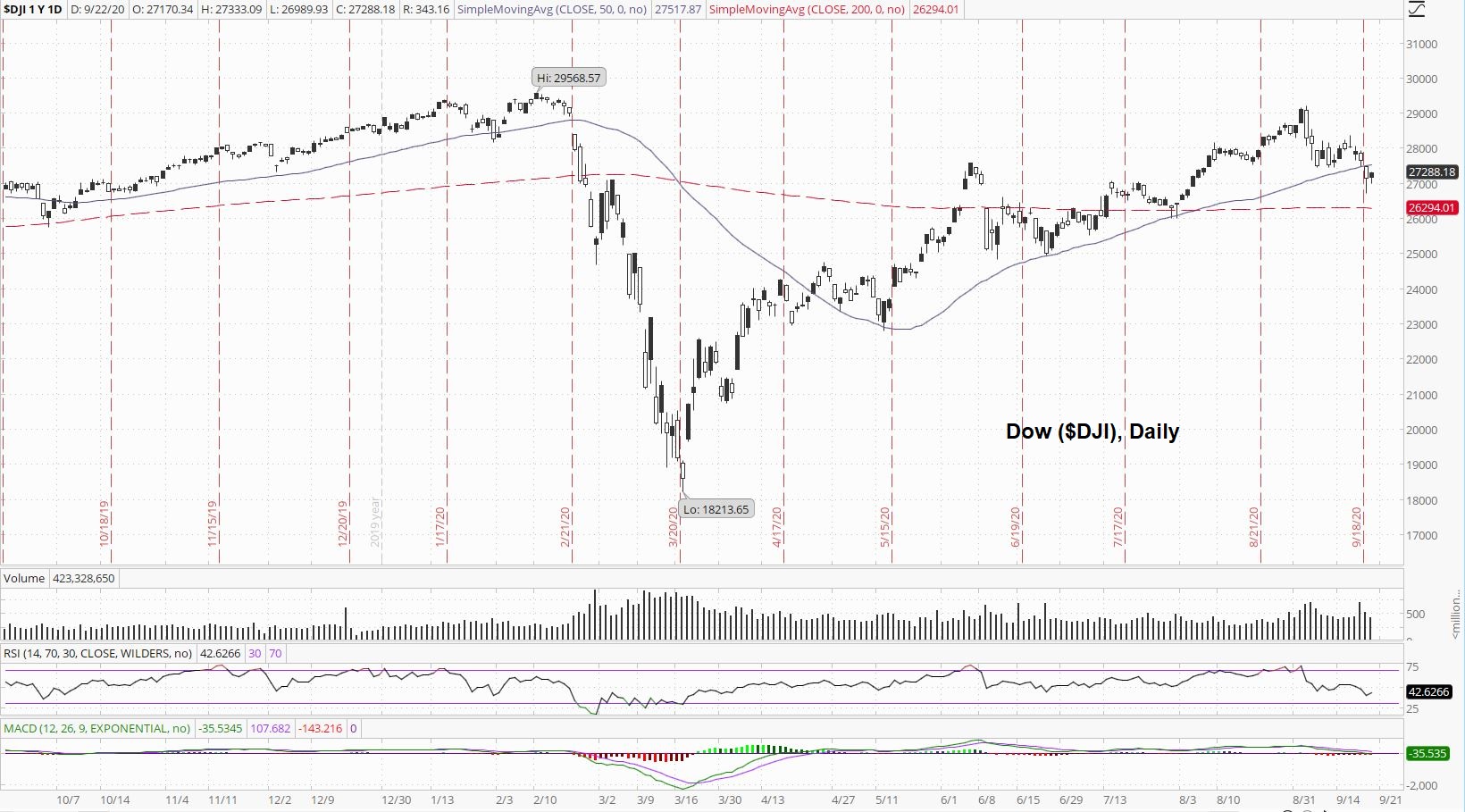 Many analysts are speculating that another crash in the stock market would get Congress to act quickly on the next round of stimulus, and I would tend to agree because it's hard to justify the Fed going in and maintaining smooth, functioning markets, or however they'd spin it to the public, without the Federal government going in and throwing a direct lifeline to the people in the form of Economic Impact Payments.

Interestingly, all things considered, there doesn't seem to be all that much "fear" in the markets: 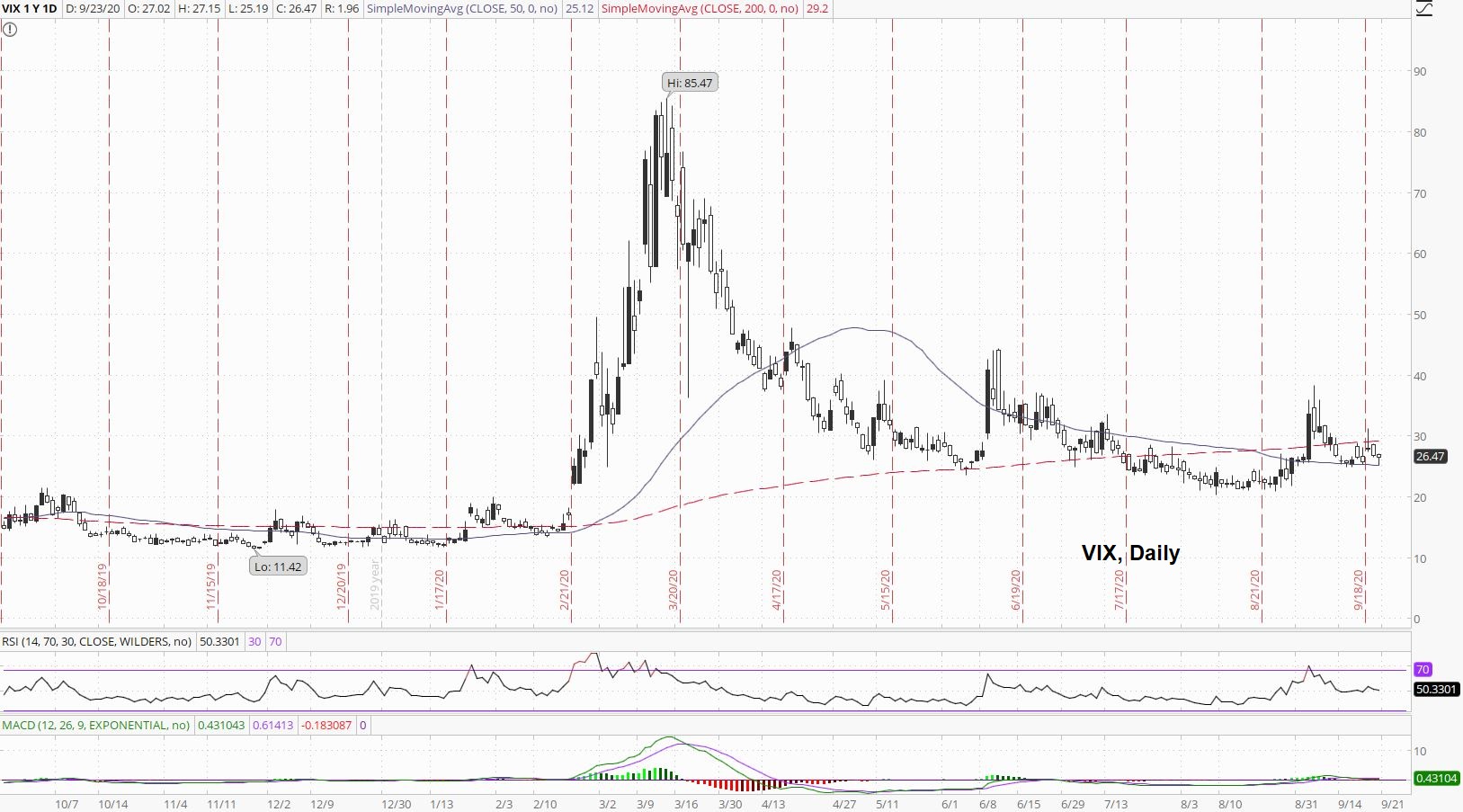 Perhaps market participants are assuming both the Fed and the Federal government will come to the rescue very soon?

There is a lot of talk about inflation targeting, and if you look at the yield on the 10-Year Note, it certainly seems to be the case: 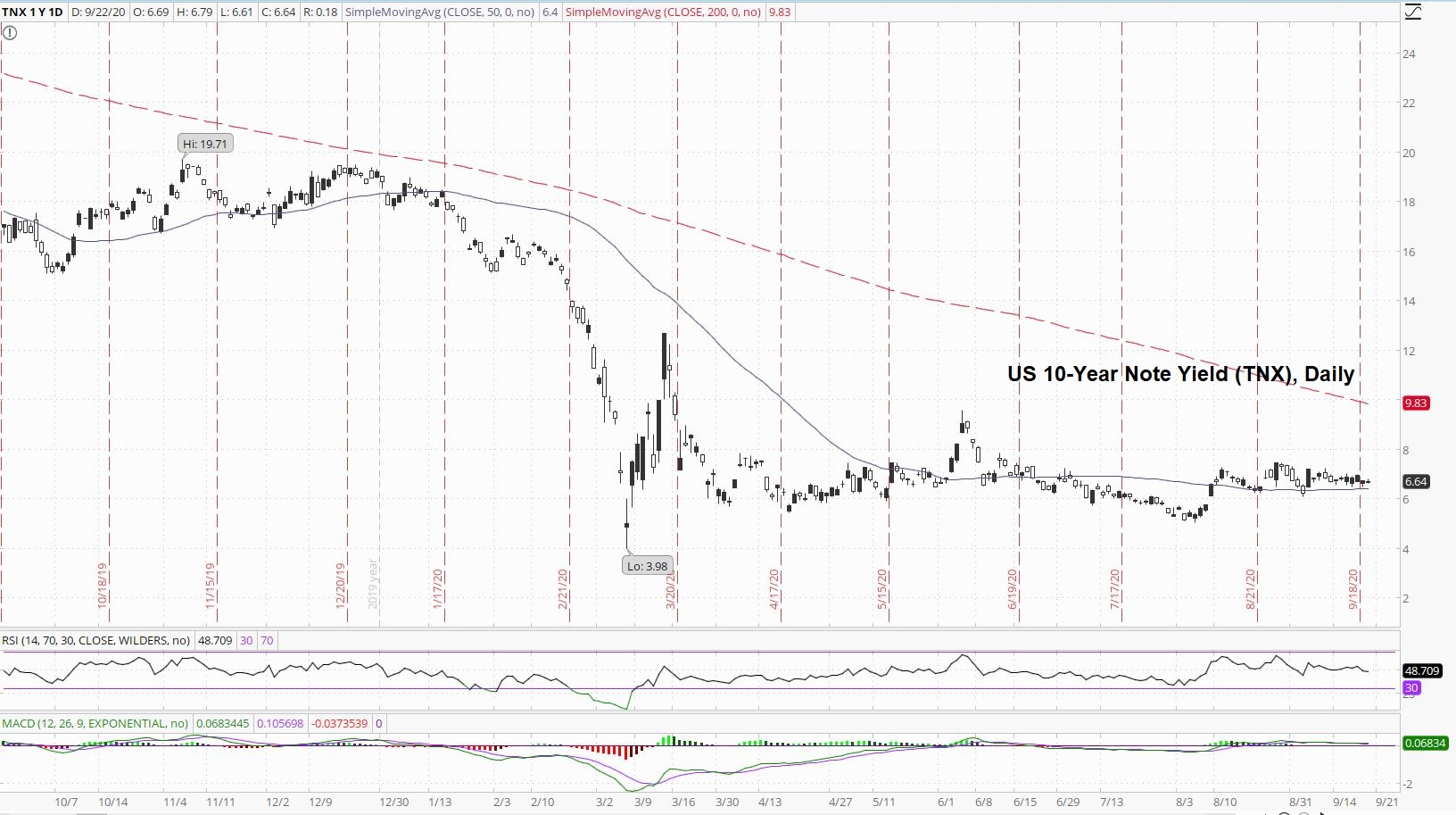 As consumer prices rise while yields stay constant, inflation in real terms becomes painful for many.

Along with a flash sale on silver, there is a boost of adrenaline in the US dollar: 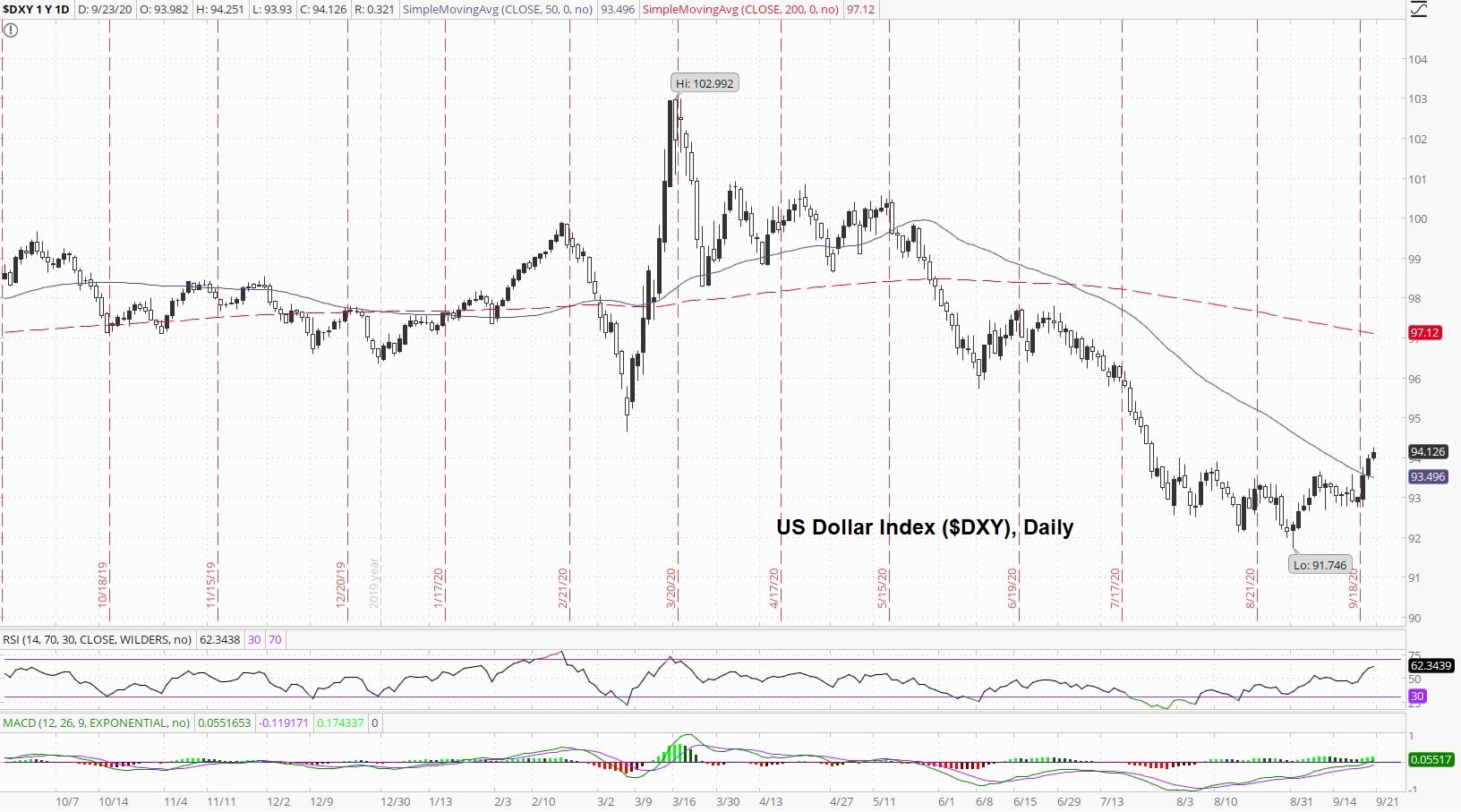 That's the best of both worlds to the humble stacker!

Especially as silver is perhaps not just THE gift horse, but right now, THE ULTIMATE gift horse.