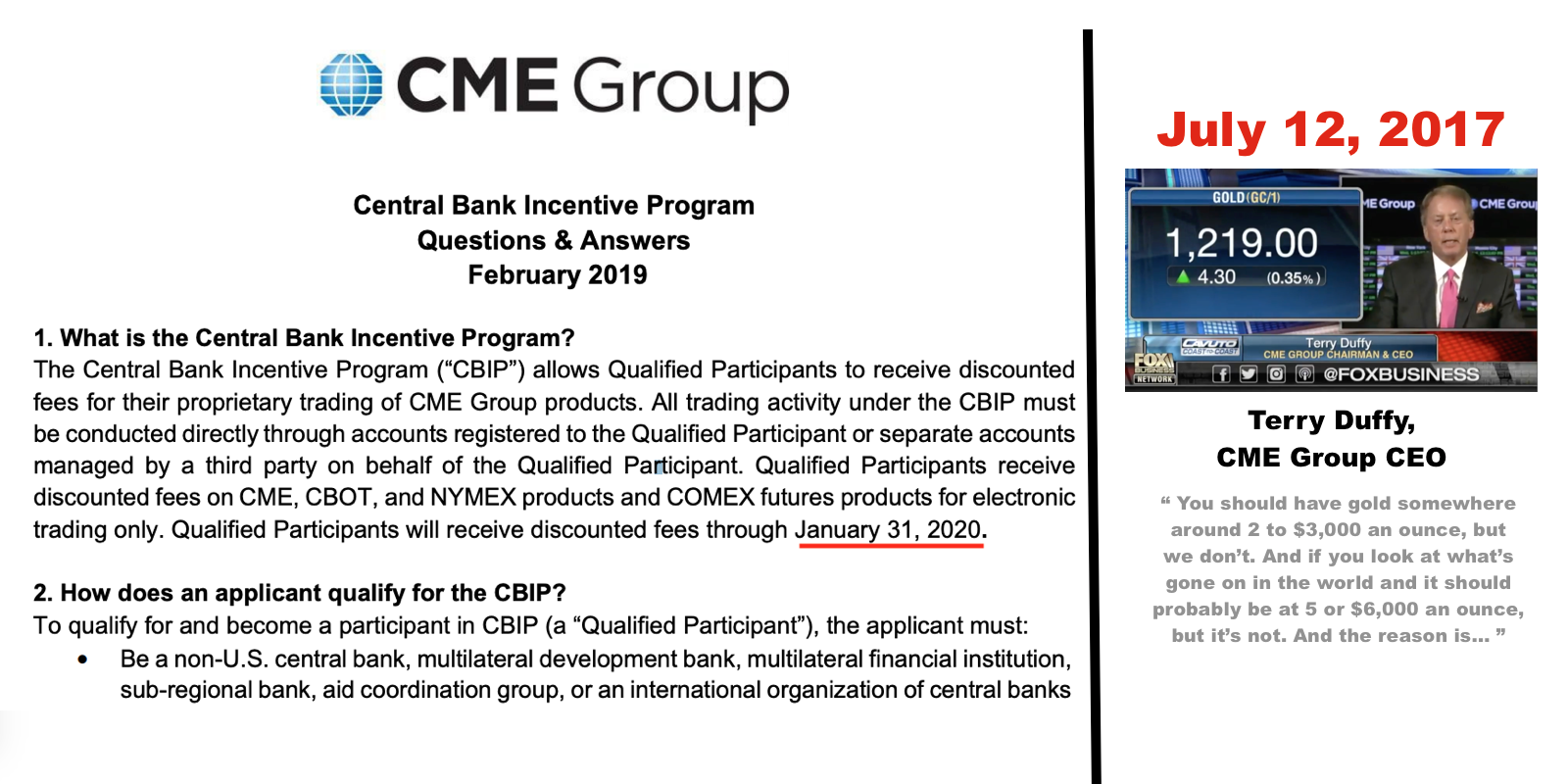 The fact of the matter is the CME Group (COMEX, NYMEX) continues to not only allow, but also incentivizes the following financial institutions to trade in its price discovery critical futures market exchanges.

Entities such as non-US central banks, multilateral development banks (e.g. entities like an IMF or the World Bank), and even international organizations of central banks (e.g. BIS’ gold and FX trading desk) can actively save some fiat fund$. If and when they decide to trade critical price discovery commodity futures contracts via the CME Group's silver, gold, platinum, palladium, fiat FX, bitcoin, US treasuries/bonds, and other financial products.

To list both past and ongoing pieces of evidence for silver, gold, and other financial market manipulations would be exhaustive. The total aggregate of settlements is likely over the $100 billion USD threshold by now.

Others in our industry have documented this for decades, perhaps no one better nor more committed to this important matter than the Gold Anti-Trust Action Committee.

Visit the GATA website for more documentation of this deep subject as one cannot justly cover it within a small bullion blog. Below is an interview we did with GATA’s Secretary Chris Powell just over one year ago covering some of the key points at the time.

Late last year was the US Department of Justice busted a former JP Morgan precious metal trader for commodity price market manipulation (e.g. using spoof orders) which were allegedly taught to the individual guilty party by their knowing superiors at the bank’s trading desk.

That is the same global bank that is defined by the BIS’ FSB as Earth’s most systematically risk-laden, capital buffering required bank currently (see page 3, bucket shop 4).

The CME Group (COMEX, NYMEX) has extended its timeframe to not only allow, but also further incentivize non-US central banks, multilateral development banks (e.g. entities such as the IMF or World Bank), and even international organizations of central banks (e.g. BIS) to potentially continue trading in critical price discovery commodity futures contracts.

Futures contract trading in silver, gold, platinum, palladium, fiat FX, bitcoin, US treasuries/bonds, and other financial products are critical to price discovery ongoing. Things like the ongoing spot price of gold, or spot price of silver are often mostly dictated by their most highly traded futures contracts on the CME Group’s COMEX for instance.

The ongoing CME Group Central Bank Incentive Program gets extended seemingly each year that comes along.

The recent CBIP extension was made extending into 2021 (see page 2-5 of the CMEGroup's letter to the CFTC).

It appears the financial powers that be are going to keep running price control programs until a true financial crisis takes hold of the global economy and real-world shortages of critical physical commodities begin to occur.

Palladium supply shortages at the moment are perhaps the largest latest example of such a threat to the derivative price discovery complex maintaining its remaining shreds of credibility. That and the likely fact that its very existence is part of likely ongoing US National Security. 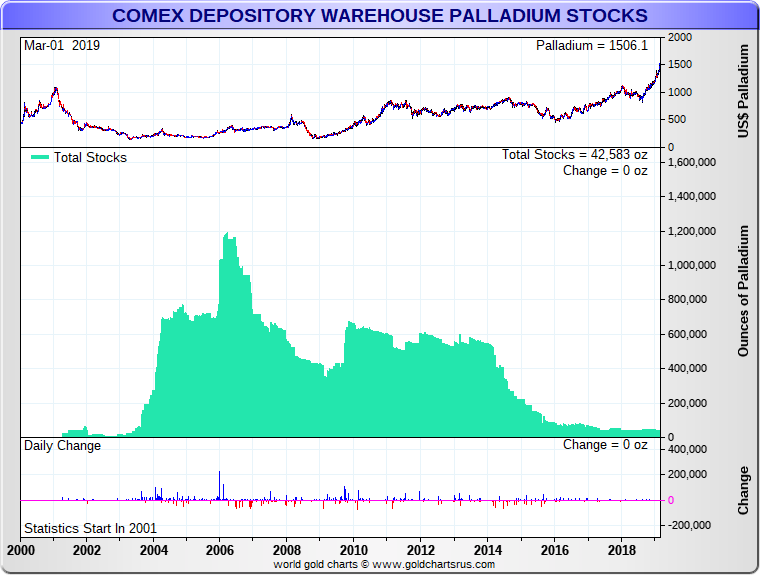 Not even deeming palladium a US national security critical commodity relieves us from that fact that current fractional reserve traded NYMEX palladium contracts are leveraged by more than 60 times warehouse holdings at the moment.

Unless we see higher prices for palladium, the current world supply of palladium may remain in a shortage of ongoing supply. 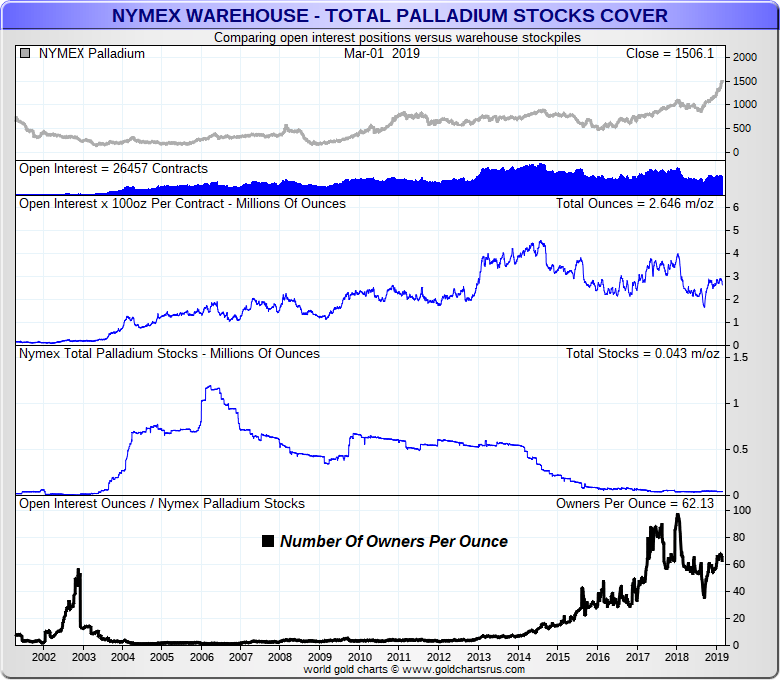 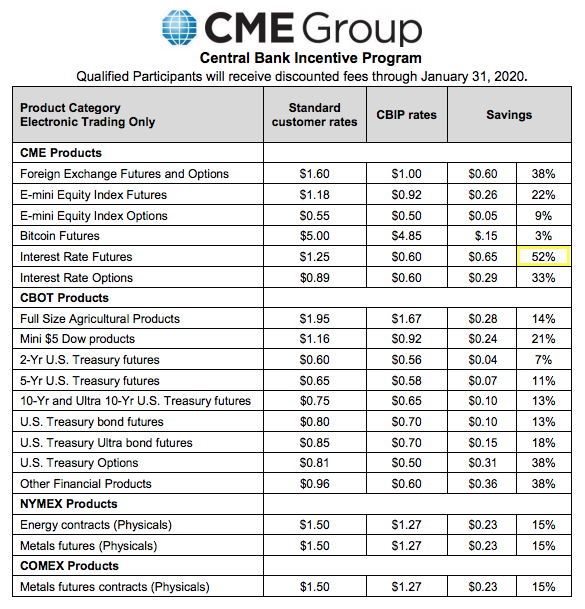 While this may give the impression that their respective futures market actually moves mass bullion in price discovery. With a simple cursory understanding and examination of the physical delivery data one would learn that month on month, typically basis points or less than 1% of NYMEX or COMEX precious metals futures contracts result in the physical movement or delivery of bullion anywhere.

Mostly these markets are mere price hedging and betting games with winning long or short wagers mostly dictating spot price movements. Virtually all bets are settled in fiat US dollars, not physical deliveries of bullion. This has been the case for decades (and China by state actions, knows this fact).

The embedded clip below contains a critical excerpt from a July 12, 2017 interview with Terry Duffy, Chairman, and CEO of the CME Group (COMEX / NYMEX). Those are arguably the world's largest day to day price discovery determinates for physical precious metal prices (some might also argue the LBMA is the other major factor for day to day precious metal price discovery ongoing).

The second half of this video clip is taken from a January 19, 2018 interview where SD Bullion's James Anderson speaks with Chris Powell of the Gold Anti-Trust Action Committee (GATA.org) about the matter.

The following was written in the year 2000 by Peter Warburton, the author of the book “Debt and Delusion”.

What we see at present is a battle between the central banks and the collapse of the financial system fought on two fronts. On one front, the central banks preside over the creation of additional liquidity for the financial system in order to hold back the tide of debt defaults that would otherwise occur. On the other, they incite investment banks and other willing parties to bet against a rise in the prices of gold, oil, base metals, soft commodities or anything else that might be deemed an indicator of inherent value. Their objective is to deprive the independent observer of any reliable benchmark against which to measure the eroding value, not only of the US dollar, but of all fiat currencies. Equally, their actions seek to deny the investor the opportunity to hedge against the fragility of the financial system by switching into a freely traded market for non-financial assets.

It is important to recognize that the central banks have found the battle on the second front much easier to fight than the first. Last November, I estimated the size of the gross stock of global debt instruments at $90 trillion USD for mid-2000. How much capital would it take to control the combined gold, oil and commodity markets? Probably, no more than $200 billion USD, using derivatives. Moreover, it is not necessary for the central banks to fight the battle themselves, although central bank gold sales and gold leasing have certainly contributed to the cause. Most of the world’s large investment banks have over-traded their capital so flagrantly that if the central banks were to lose the fight on the first front, then their stock would be worthless. Because their fate is intertwined with that of the central banks, investment banks are willing participants in the battle against rising gold, oil and commodity prices.

Central banks, and particularly the US Federal Reserve, are deploying their heavy artillery in the battle against a systemic collapse. This has been their primary concern for at least seven years. Their immediate objectives are to prevent the private sector bond market from closing its doors to new or refinancing borrowers and to forestall a technical break in the Dow Jones Industrials. Keeping the bond markets open is absolutely vital at a time when corporate profitability is on the ropes. Keeping the equity index on an even keel is essential to protect the wealth of the household sector and to maintain the expectation of future gains. For as long as these objectives can be achieved, the value of the US dollar can also be stabilized in relation to other currencies, despite the extraordinary imbalances in external trade.

Although the prices for precious metals have risen many folds from the time of the previous words of Dr. Peter Warburton’s being published (Gold Price History, Silver Price History).

The truth of the matter is the respective fiat currency prices of various major precious metals (Gold, Silver, Platinum, and Palladium) would likely be exorbitantly many fold higher today had it not been for the myriad examples of market manipulations documented by GATA and others since. 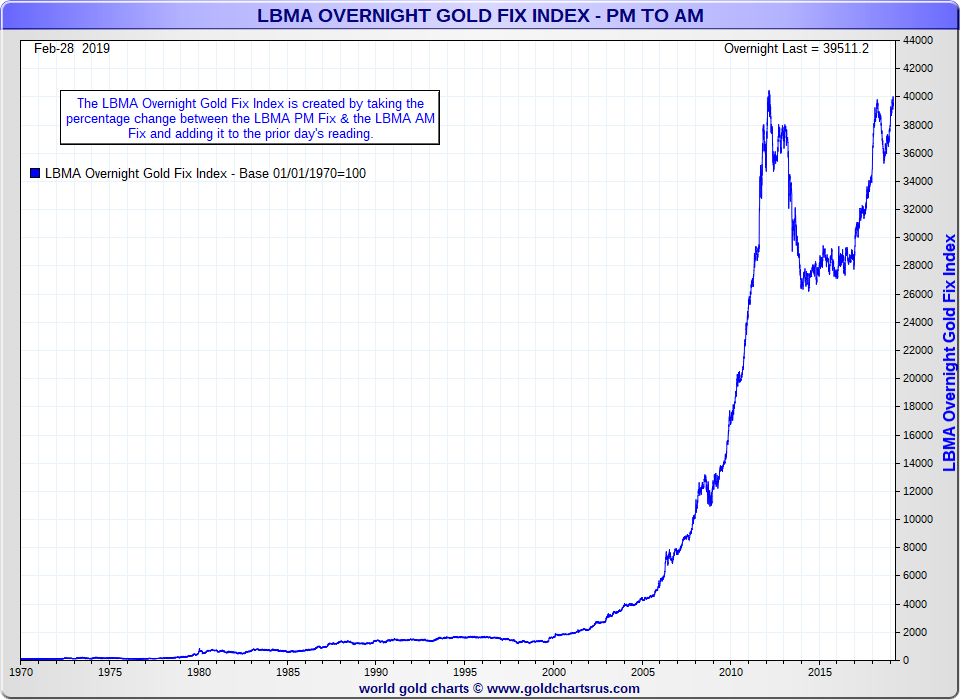 How to understand the Gold Market Manipulation chart above ^

In this daily gold price data-driven theoretical, if you had sold gold daily prior to the LBMA AM Fix and bought it following the LBMA PM fix, and compounded that action day after day from 1970 to today. Your theoretical gold trading account would have by now nearly multiplied 400Xs in value.

We know what you are perhaps thinking.

But the beginning 1970 gold price was like $35 oz USD. The gold price today is just under $1,300 oz USD. Indeed, only a mere more than 37X multiple in fiat US dollar terms over this near 50-year timespan.

But guys like CME Group’s Terry Duffy and institutions like the LBMA (gold transparency push) are likely where we might find more answers if we ever indeed bothered to both get informed, and perhaps politely ask really pointed questions.

Regardless of all this market manipulation ongoing, we will not be surprised one day when CME Group Rule 589 goes into effect (page 6, Appendix C).

Just review our London Gold Pool price rigging collapse history for an example of how the last attempt to control gold prices worked out.

It follows basic logic that if indeed rules are made to be broken, so too are artificial prices... violently to the upside.