Many of the technical analysts are looking at the gold & silver charts and calling it a "dead cat bounce". A dead cat bounce on the charts happens when the price of whatever it is you're looking at is falling, and then after falling for some time, price rises somewhat, only to begin falling again. 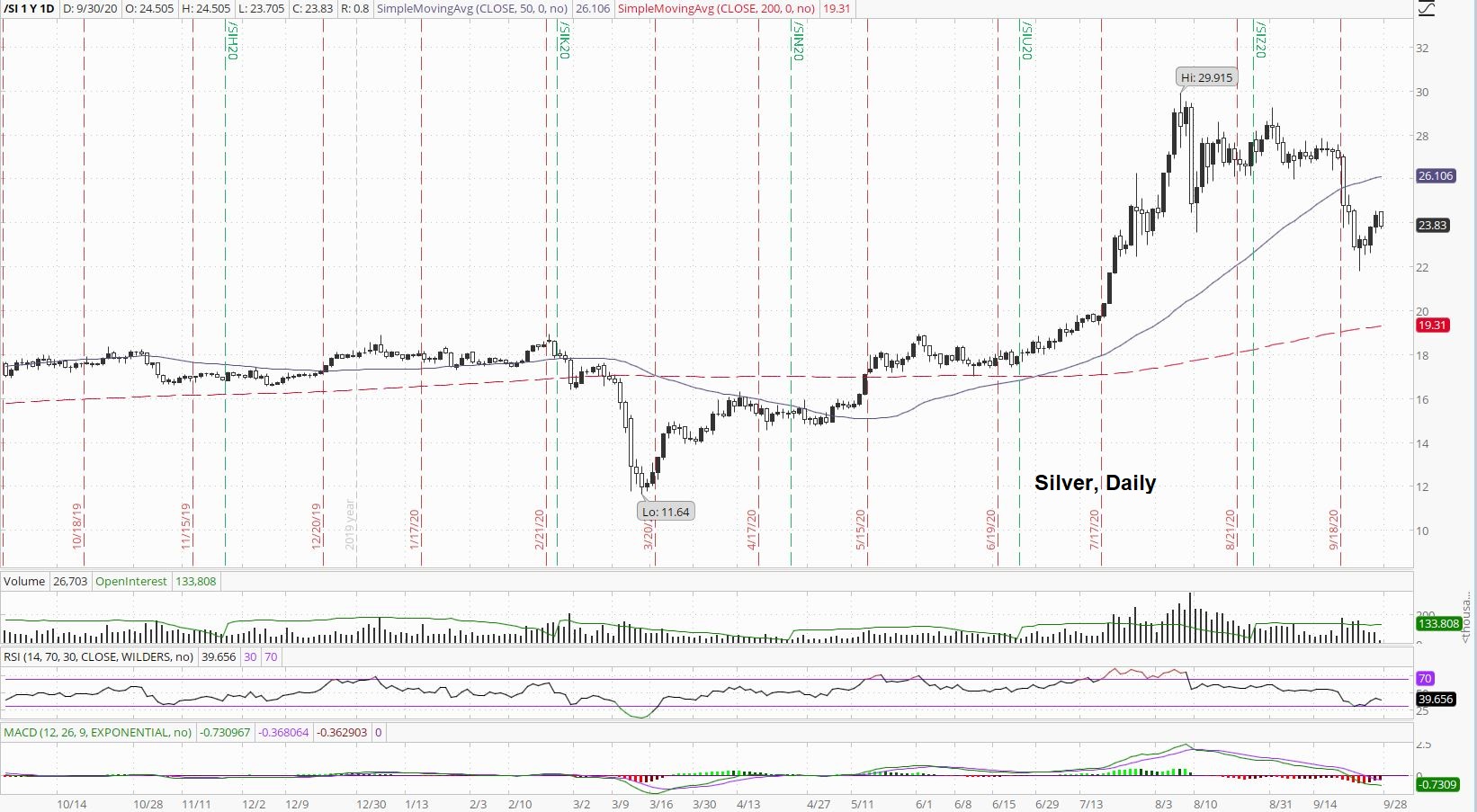 It should be noted that silver is still down over 10% from its most recent "sell-off", or, said differently, silver's got one heck of a flash sale going on with no coupon needed!

Here's what silver's chart would look like if what we're seeing will end up being a dead cat bounce: 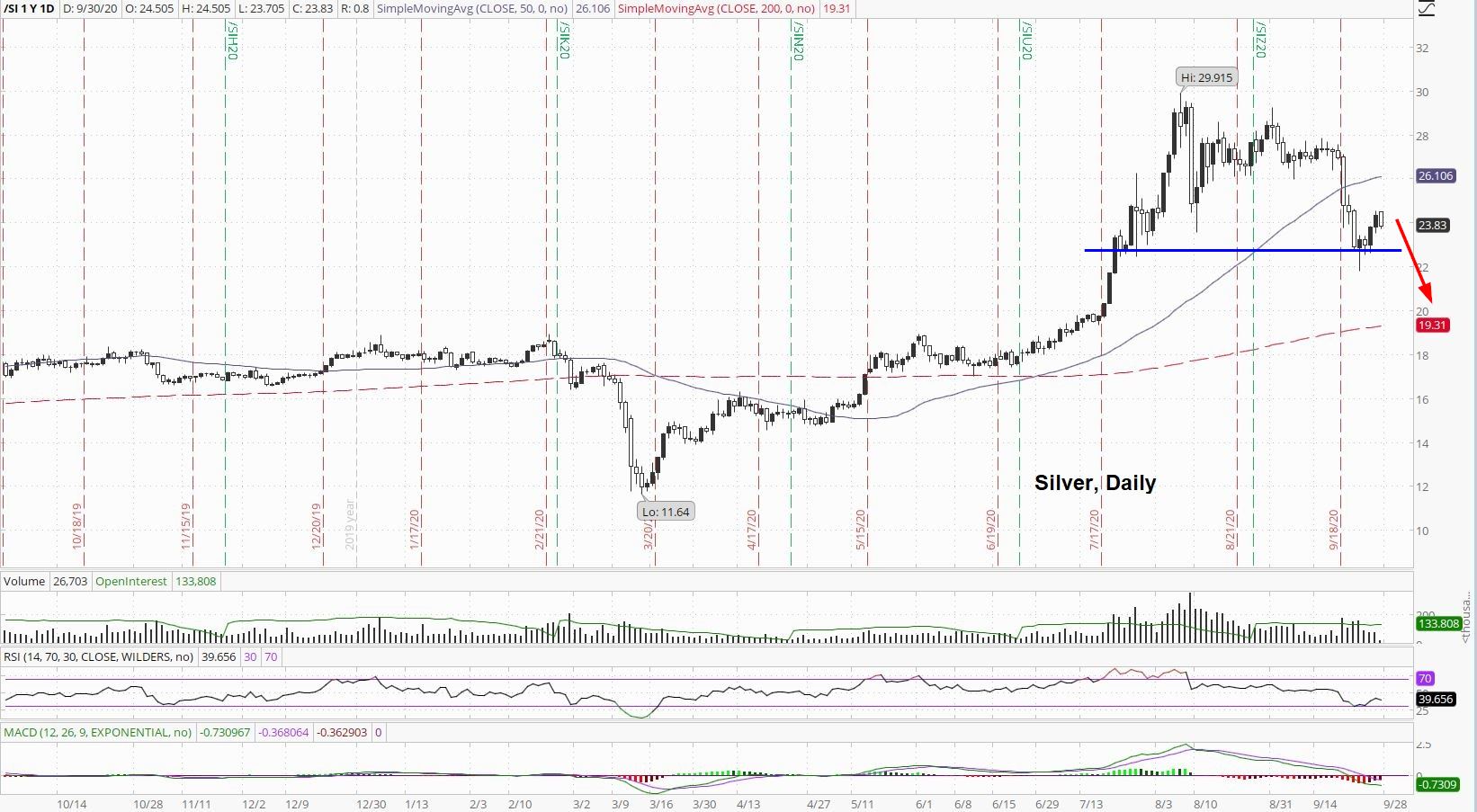 The red arrow would be where the dead cat (silver) is heading (after this current "bounce").

There are several problems with silver simply being a dead cat bounce right now.

First of all, there is some pretty interesting support around, call it, $22.50. Support could hold there, and if we head lower from here, that support could end up being more of a double bottom than a dead cat bounce. Additionally, as you will see in the charts below, many of the charts that I watch on a daily basis are showing similar set-ups, with silver correlating perhaps with the stock market the most, at first glance, but one one of these stock market drops, silver's going to surge.

Furthermore, stackers and other smart gold & silver investors know about the massive, almost $1,000,000,000 fine JP Morgan will be paying for, in part, its manipulation of the gold & silver futures market (a.k.a. "paper gold" & "paper silver") between 2008 and 2016. If it is true the manipulation of gold & silver is finally coming to an end, and hopefully sooner than later, assuming the overall policy has been to manipulate both to the upside and to the downside with bias for the downside (price suppression/US dollar competition), then perhaps the fundamental forces of price catching up to reality will weigh more on gold & silver's next move than the technicals will?

What do I think?

Well, I wrote a controversial article on August 11th:

Here's what I said at the very end of that article:

"Here’s my prediction: Once the smash in gold & silver is over, an agreement will be made, and the roar of the helicopters will be heard overhead."

In other words, gold & silver wouldn't rally until clear details of the next round of Federal fiscal stimulus are known, which would include another round of Economic Impact Payments to eligible individuals, and so far, that seems to have been the correct call.

The question is, where does the next round of stimulus stand right now?

Fortunately, or unfortunately, depending on your point of view, the next round is in limbo. That is to say, after Justice Ginsburg died, President Trump's Supreme Court nomination of Judge Amy Coney Barrett has caused quite the stir in Washington and a developing partisan confirmation battle to go along with it. Additionally, now that the Presidential debates have kicked off, with the first one having taken place last night, there is also quite the focus on the upcoming election. Needless to say, it seems as if the next round of stimulus has been put on the backburner, for now.

Although I do think the pot is ready to boil over and cause quite a mess in the kitchen unless it is brought to the fore again.

Just yesterday, we got news of Disney laying off nearly 30,000 employees, and we also got news of the airline industry possibly laying off 40,000 employees this very week. The bottom line is when it comes to the economic recovery on Main Street, to say "it's not going very well" would be an understatement. In fact, just yesterday it was reported that US retail store closures hit a record in the first half of this year.

Suffice to say the next round of Fiscal stimulus may be in limbo right now, and I may have been wrong on my timing, but if pain on Main Street translates into pain on Wall Street in general and pain in the stock market specifically, in my opinion, something will get rubber stamped in Congress, then get signed into law by President Trump, and then the second drop of helicopter money in 2020 will commence.

A drop in the paper gold-to-silver ratio may have also commenced: 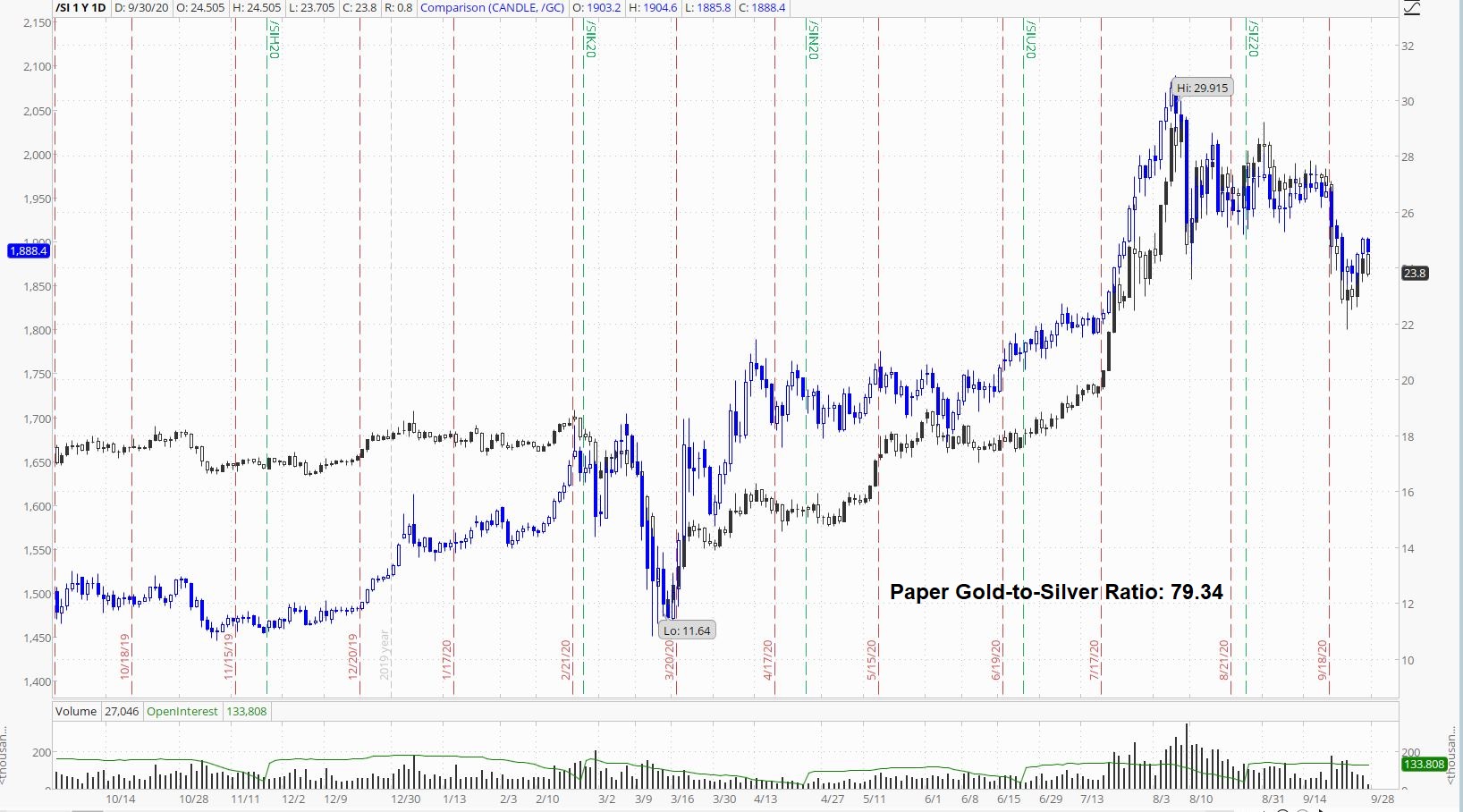 Even though we're back down to a 70-handle, barely, many people would say the ratio is still screaming "buy silver with gold", and I would agree. 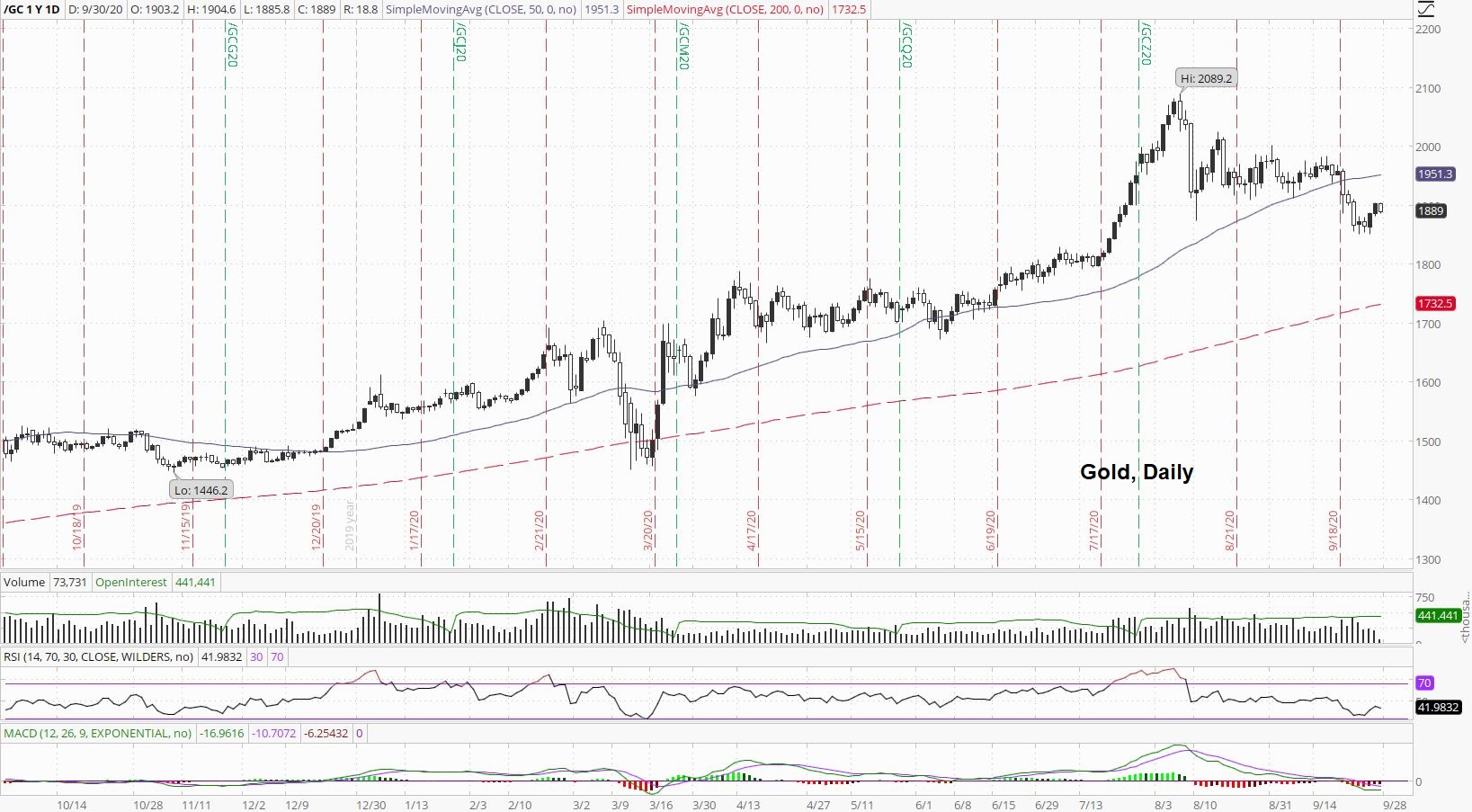 If this is a dead cat bounce, from a "manipulated markets" point of view, which is no longer something only Tin Foil Hat Conspiracy Theorists talk about these days, but rather is something that is now fully accepted by nearly all people in the mainstream, less a few stubborn holdouts for one reason or another, then now is the time to smash gold's price (and silver's) since "Golden Week" begins in China on Thursday, which means China's markets will be closed for an entire week, and as the saying goes, "When China's Away, The Market Riggers Will Play".

The question is this: What does Golden Week mean in the Year of No Surprises, 2020?

Platinum is still a great opportunity, in my opinion, for deeper-pocketed investors: 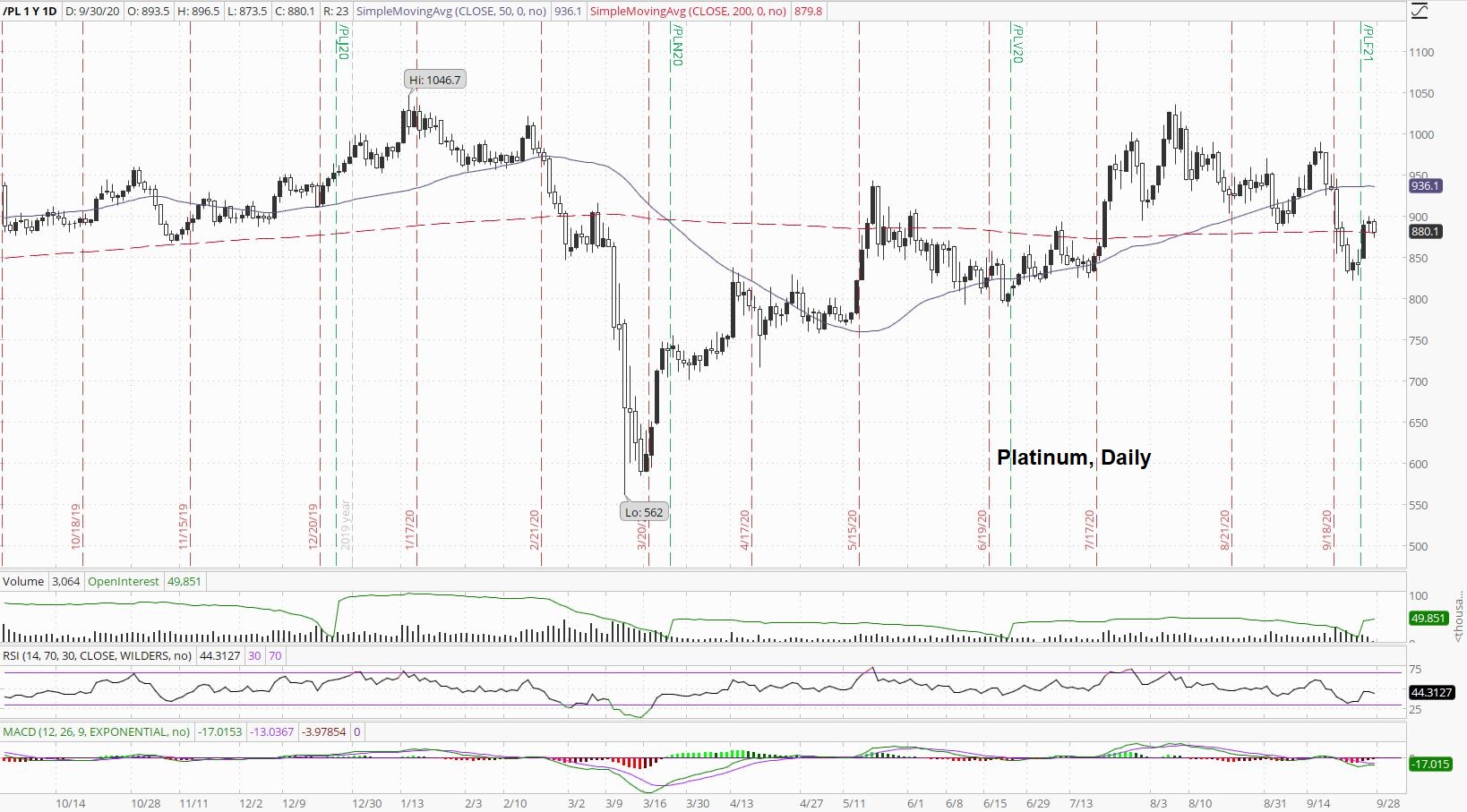 Platinum is still down about a hundred bucks, year-to-date, and to think, many analysts are expecting the precious metals to have a strong fourth quarter! 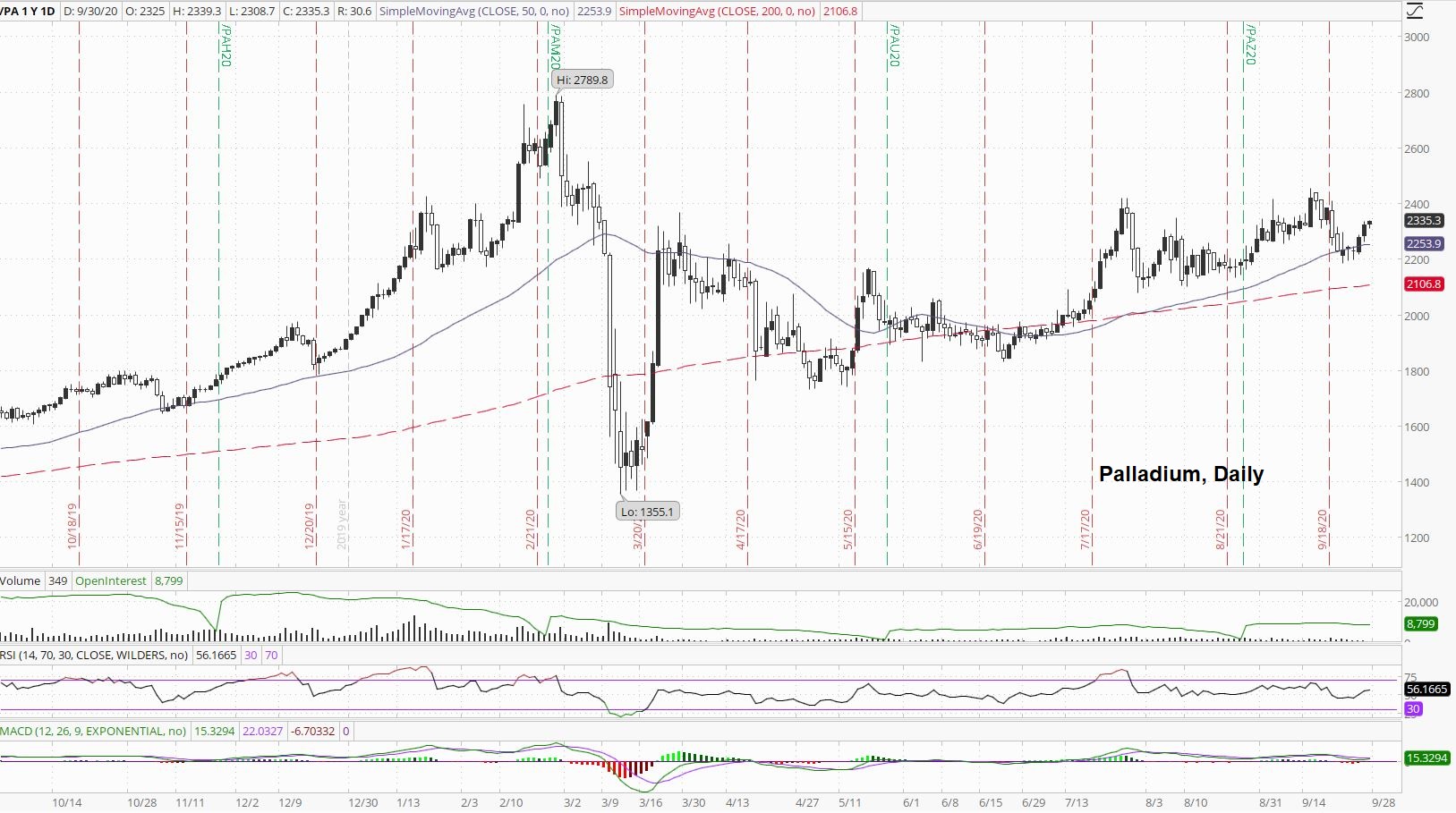 Notice we're reaching the resistance of the channel, however, and if the precious metals are breaking out here, palladium could break out too.

Copper is consolidating around three bucks: 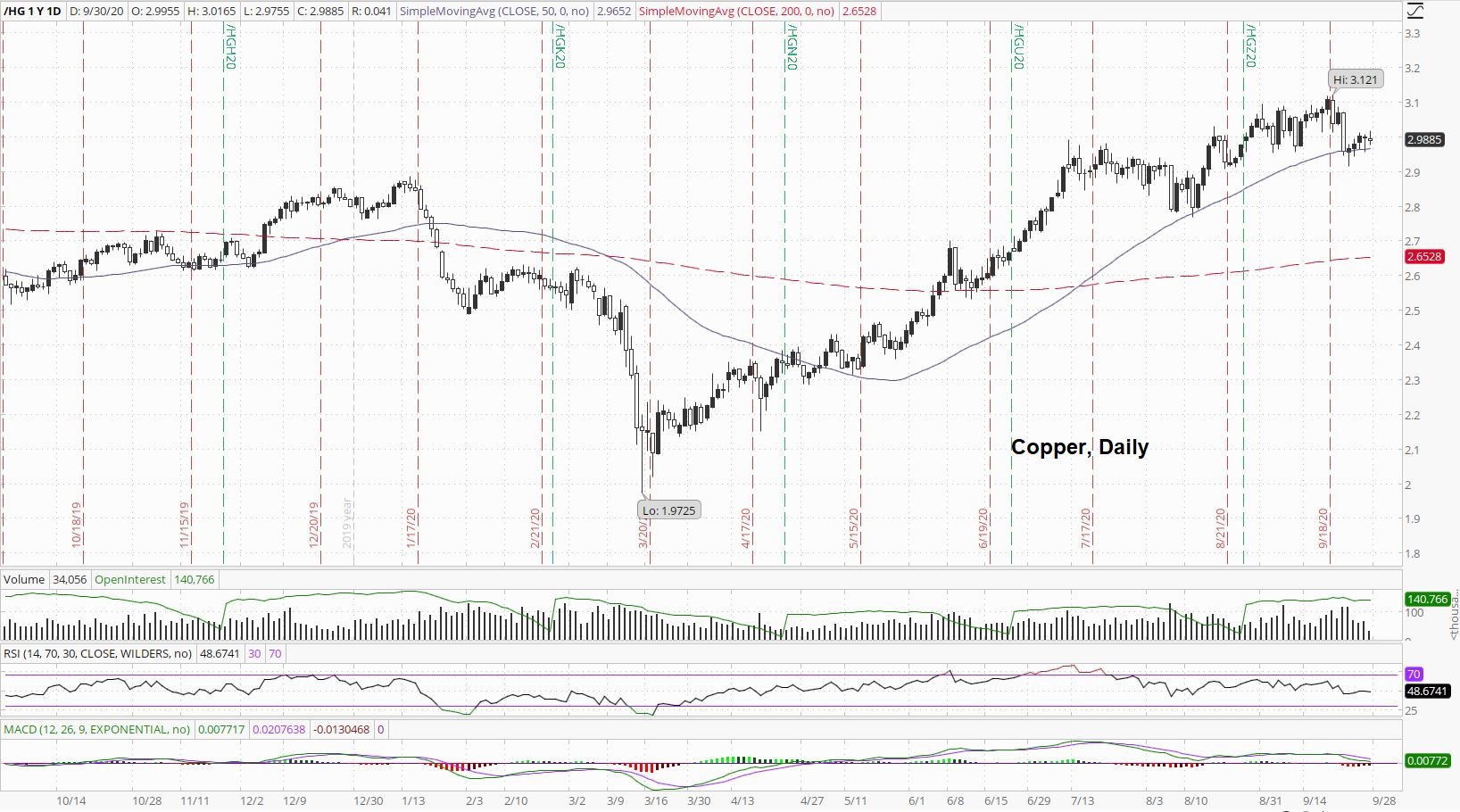 Even if there is a so called "double dip" recession on Main Street, I wouldn't be expecting copper to get to crashing again like it did in late January through mid-March because in my opinion, the inflationary measures undertaken by central banks and governments around the wrold is just too great.

Crude oil, however, is another story: 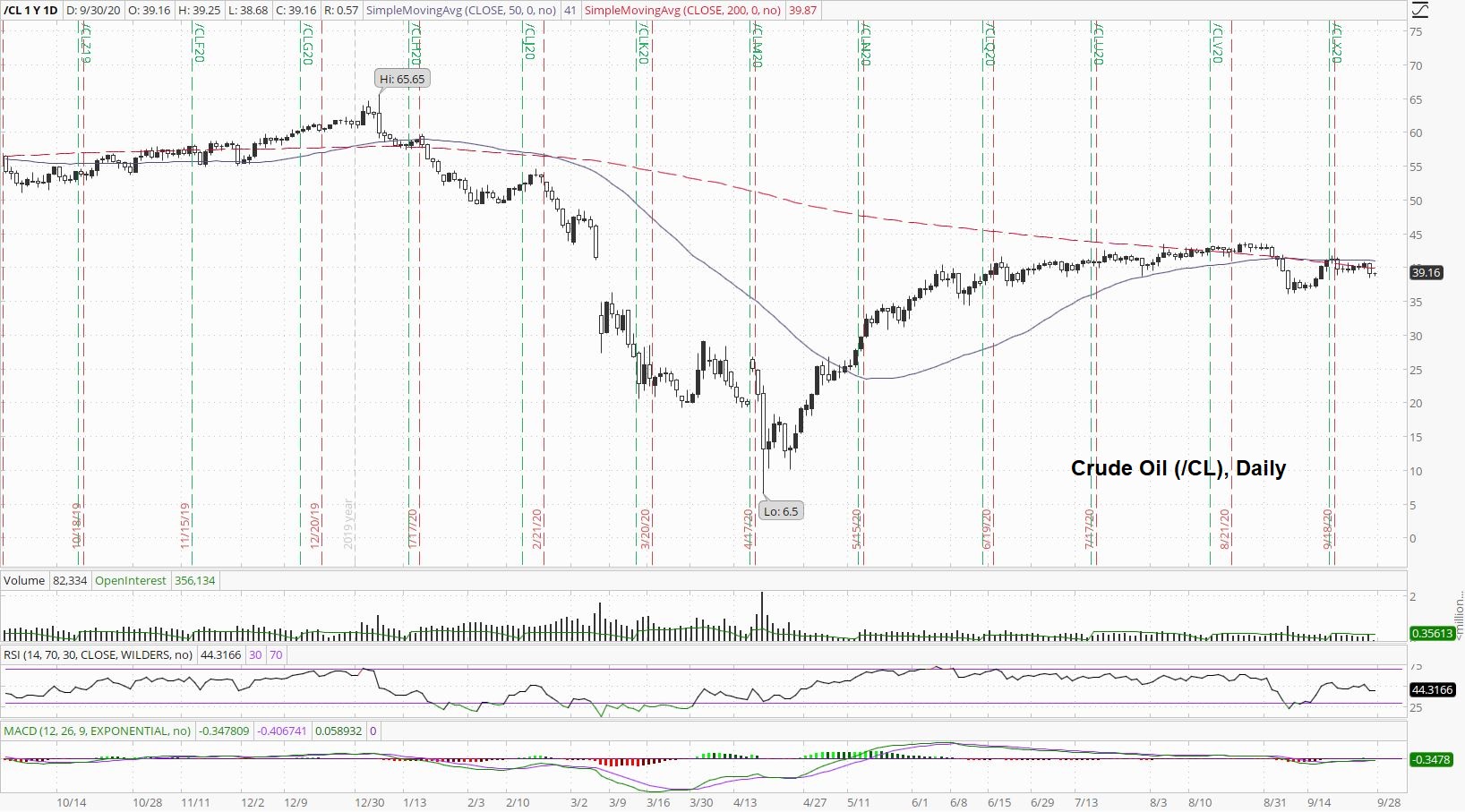 The article I linked to above about the airline industry mentions a statistic that US air travel is down, still, some 70% from this time last year. That tells us there could still be some 'how much can you store' versus 'how much is consumed' imbalances that need to get worked out.

The stock market hasn't been able to really punch through its 50-day moving average (the blue line): 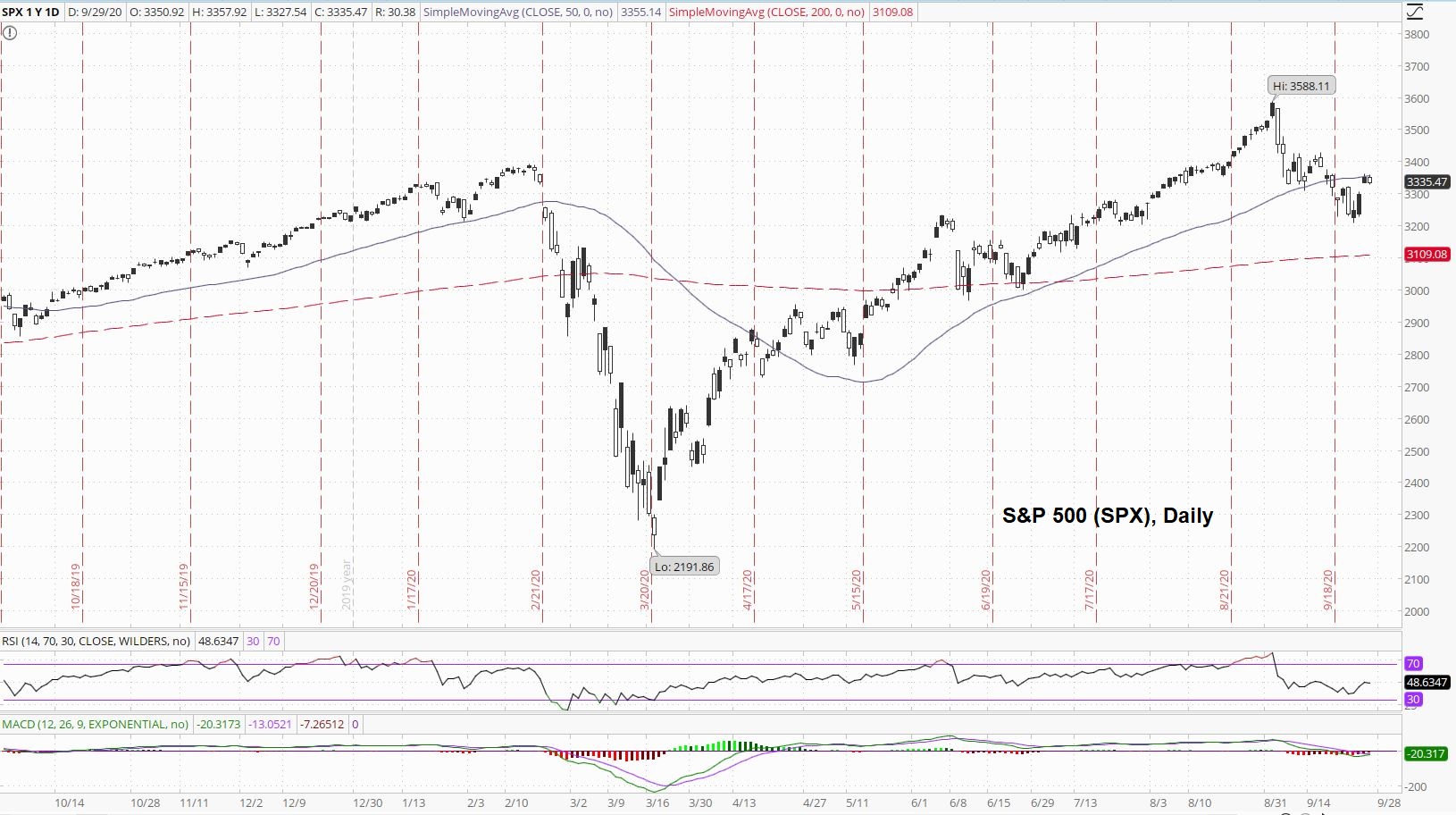 Is Wall Street's market about to get a cold, hard does of Main Street's reality?

If so, get ready for a spike in fear: 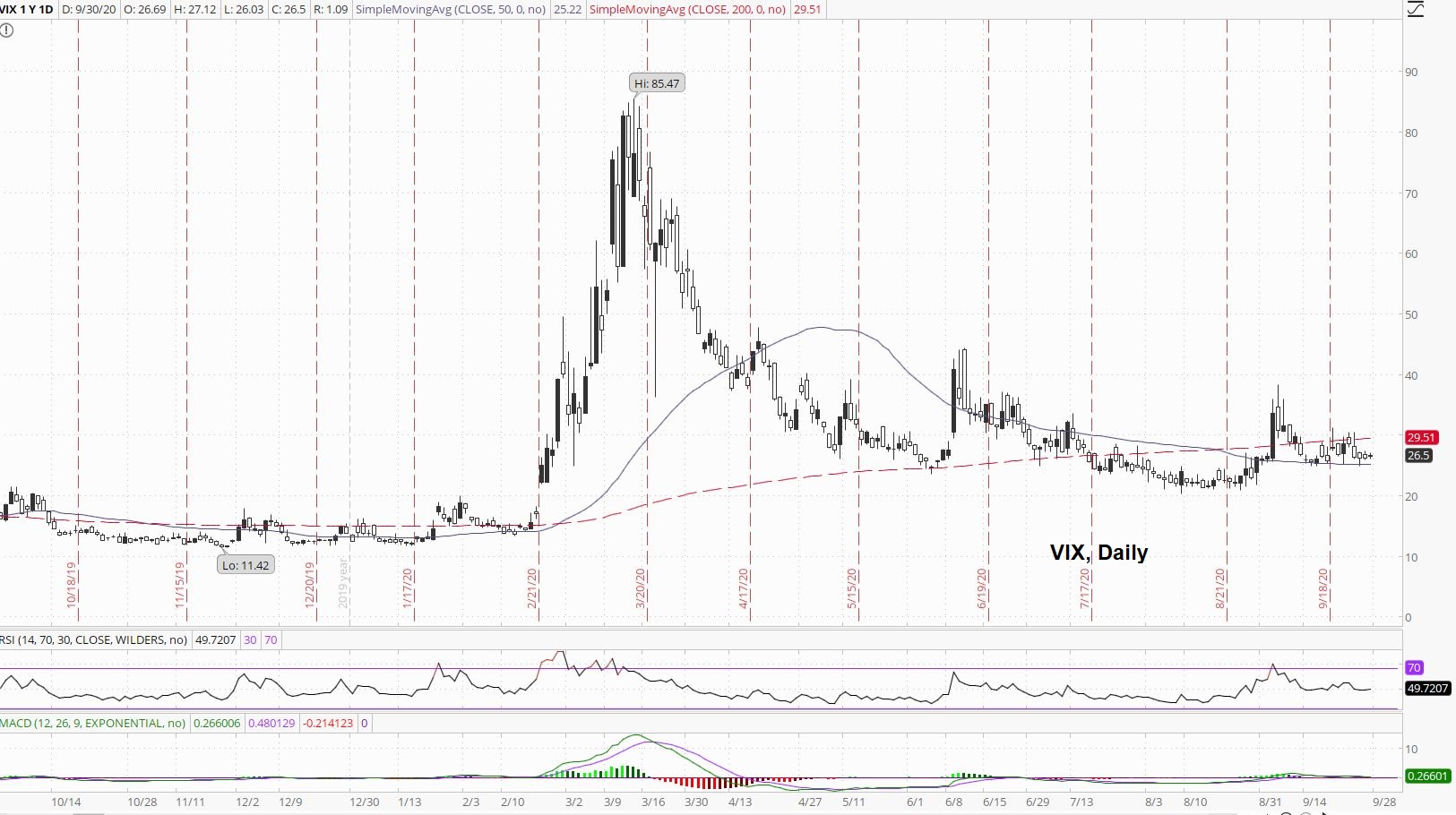 Indeed, there are a number of things that could cause jitters in the market right now.

I'm starting to sound like a broken record when it comes to yield on the 10-Year Note: 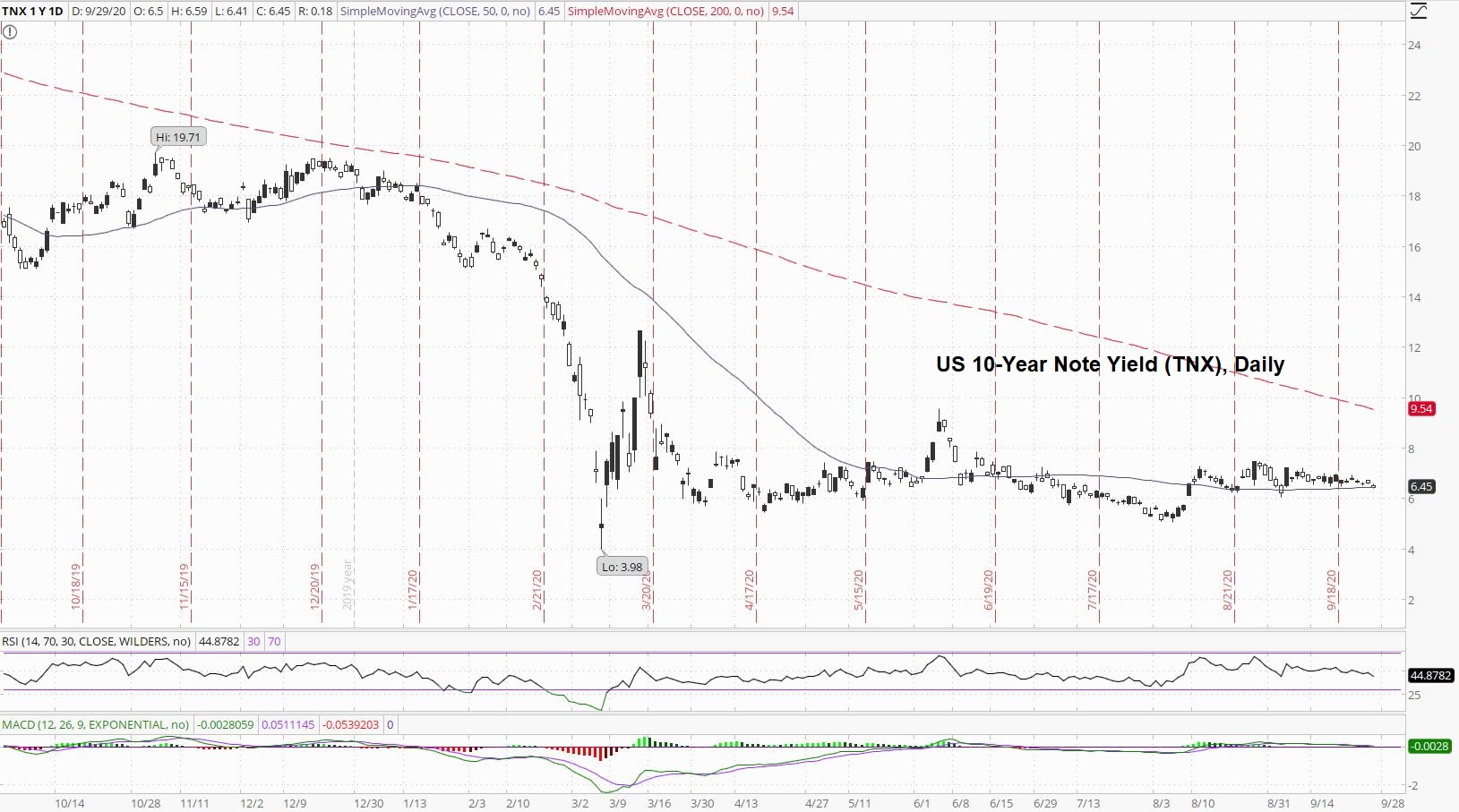 Since it's a sovereign debt crisis, however, and the crisis is tha there is simply too much of it, the pressure will be do the downside, but that only lasts for as long as the confidence in US Government debt lasts.

Some analysts are calling silver a dead cat bounce, but check out the dollar: 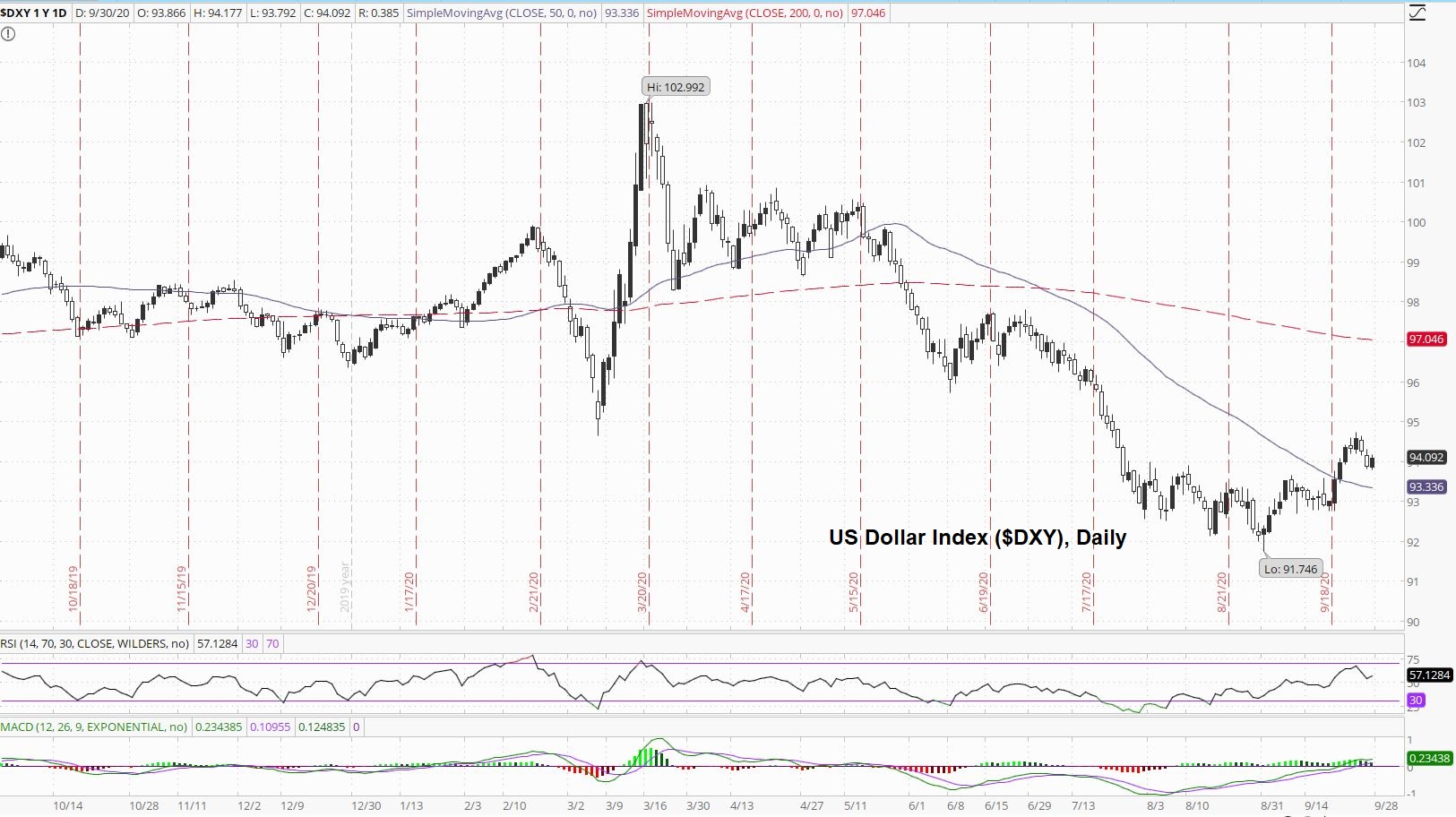