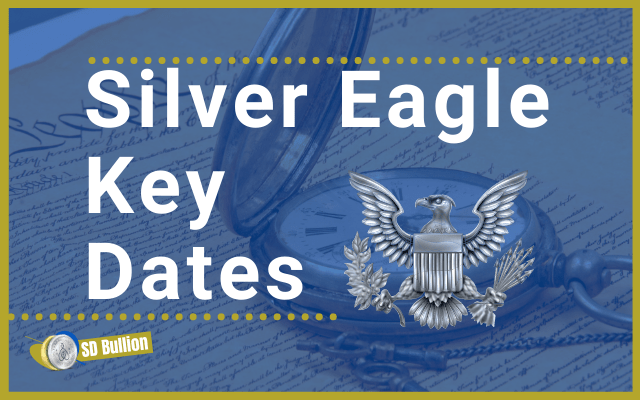 Ever since its debut in 1986, the American Silver Eagle coins have climbed their way to the top of the bullion industry, especially since the 1990s.

In this article, we will analyze the history and success of this program. We will also specify what are the key dates and variations for the bullion coin version, for the proof American Eagle, and the Burnished Silver Eagles as well. So, whether you are a silver investor or an avid coin collector, keep reading to learn more.

As we have mentioned before, the United States Mint launched the American Silver Eagles in 1986, along with their gold counterpart, the American Gold Eagles. The program grew exponentially and today has platinum and palladium coins as well. Nowadays, the American Eagles are arguably one of the most popular series in the world.

The bullion version of the American Silver Eagles is produced for investment purposes. They are not sold directly by the US Mint, but rather by bullion dealers, both in the US and internationally.

The Proof Silver Eagle Coin was minted at the San Francisco Mint from 1986 to 1992 and bears the "S" mintmark. From 1993 to 2000 at the Philadelphia Mint, with the "P" mark. Since 2001, the proof American Eagle coins have been minted at the West Point Mint, bearing the "W" (except for 2009, when there were no proof silver eagles minted).

These proof coins receive a frosty finish on the fields of both verses. Although they could constitute a sensible investment, they are mostly designed for collectors.

Also referred to as "Burnished Uncirculated", or "W Uncirculated", this is another collectible option. Uncirculated Silver Eagles are struck on burnished blanks. usually produced at the West Point Mint bearing the "W" mintmark.

The obverse design, known as the Walking Liberty design, used on the American Silver Eagle coins is originally from the Half Dollar circulating coins, minted from 1916 to 1947. On it, we can see Lady Liberty's figure striding with the rising sun on the landscape behind. The wind blows her gowns and an American flag, wrapped around her shoulders. Her right arm is stretched forward with her palm facing up, and branches of laurel and oak on the left, symbolizing civil and military glories. The word "LIBERTY" adorns the upper rim and the mint year is on the bottom, below her left foot. The motto "IN GOD WE TRUST" adorns the lower-right side of the face. When present, the mint mark is below the motto. It was designed in 1916 by Adolph A. Weinman.

Until 2021, the reverse design portrayed the Heraldic Eagle of the United States, with a shield and thirteen five-pointed stars. The eagle has a banner on its beak with the inscription "E PLURIBUS UNUM". It grasps an olive branch on one talon, and arrows on the other, symbolizing America's desire for peace, but readiness for war. John Mercanti created this design back in 1986.

Despite the continued success of these silver coins in the market, and their admiration by coin enthusiasts and collectors, the United States Mint decided, in 2020, that it was time to innovate the reverse design and increment a few anti-counterfeiting measures.

Emily Damstra was the artist chosen to create the new 2021 reverse design. An AIP designer and specialist in wildlife illustrations, Damstra chose to portray the bald eagle in a more natural state. In the new depiction, we can see the bird in mid-flight, wings spread open and a branch grasped on its talons as if it was about to add it to a nest. Needless to say, the new design was an instant hit. In some versions of the coin, we can see the "W" right above the eagle's tail feathers, next to the motto "E PLURIBUS UNUM". Encircling the picture is the country's name, the denomination, and silver content, "UNITED STATES OF AMERICA - ONE DOLLAR - 1 OZ. FINE SILVER".

The American Eagle Silver Coin has a face value of $1. But its real investment value comes from its fine silver content of 1 troy ounce.

This silver coin is among the most sought-after silver bullion coins in the market. As soon as the United States Mint launches them each year, investors flock to purchase them. Because they are so popular, it is usually possible to resell them for higher premiums over the spot price of silver.

Moreover, given the popularity of the series, you could almost always receive a higher payback rate when compared to other government-minted silver coins.

Thus, because there is a constant demand for them, many experts consider these coins to be a more liquid option when compared to silver bars or silver rounds, for instance.

Even if you don't really have the intention to liquidate these silver coins for investment purposes, it is undeniable that they also boast an appeal to coin enthusiasts. The Walking Liberty design on the obverse is iconic and a testament to American coinage history. The proof and uncirculated versions enjoy the best the United States Mint has to offer when it comes to coin minting quality. Even the bullion version, in some key dates, draw the collector's attention, mainly because of their low mintage.

The physical condition of the coin is also of utmost importance. MS69 or MS70 graded coins can be a rare find. Keep reading to find out more.

Proof American Eagle coins are specifically designed for collectors. They receive a mirror-like polished finish, giving the fields on the design a frosty look. In addition, the United States Mint produces reverse-proof coins. This version receives the reflective finish on the relief designs, rather than on the fields. There are even enhanced reverse proof coins. These ones have some fine details on the relief design receiving extra polish for enhanced visibility.

That doesn't mean you can't collect the bullion version of the Silver Eagles. Some rarer issues from low mintage mint years can be a fine addition to a coin collection. Below, we list some key dates from Bullion Silver Eagles, Proof, and the Burnished Uncirculated ones that you might want to keep an eye out for and add to your holdings.

The first issue and inception of the American Eagle program is a no-brainer. They were all minted at the San Francisco Mint. Although that year's mintage is not really low, the US Mint tested a variety of finishes at the time. To top it off, graded MS-70 specimens are hard to come by.

What sets the 1994 mint year apart is the mintage. Just under 4.3 million pieces were minted that year. A must-have in any collection, for sure. According to NGC, only 0.14% of these coins submitted to the grading service earned an MS70 grade.

The lowest mintage of a regular bullion American Silver Eagle to date. Only a little over 3.6 million pieces. A series of issues occurred during production, which resulted in many pieces with milk spots. In addition to the scarcity of coins in the best of conditions, 1996 marked the 10th anniversary of the program. Needless to say, these coins can fetch a high price.

Thanks to the Freedom of Information Act of 2015 (FOIA), the general public recently discovered that 79,500 issues of the 2015 American Silver Eagles were minted in the Philadelphia branch facility.

Due to the high demand from pandemic-driven buyers, and restrictions in production resulting from the quarantine, the Philadelphia Mint issued 240,000 coins that year.

For the first time since the introduction of the program, the United States Mint decided to change the design of both the American Gold Eagle and the American Silver Eagle. They announced the new designs back in 2020, but the dies for the new designs were not ready by the time the 2021 production started, mainly due to quarantine restrictions.

That year, United States Mint decided to move the production of Proof Silver Eagles from San Francisco to Philadelphia. Because the Philadelphia branch was not yet fully ready for it, only 405,913 Proofs Silver Eagle coins were struck in 1993.

Arguably the most important issue of proof silver eagles and essential to every collection. With a mintage limit of 45,000, only 30,125 were actually sold. The rarity of this item, of course, comes from the fact that proof Silver Eagles are not usually minted at the West Point Branch. This rare item was only available in the 10th Anniversary Set the US Mint released in 1995.

The 2017 mint year is especially important for those who want to collect Uncirculated Silver Eagles because of its low mintage. The US Mint struck only 150,000 of these silver coins in burnished blanks.

The exact number of coins minted in the burnished version in 2018 is not entirely clear. It is estimated that only around 130,000 were struck, setting a record low for this variation.

This coin was only the second issue of Silver Eagles in reverse proof finish and was part of the 25th Anniversary Set of the program.

Released in November of 2019, the 2019-S Enhanced Reverse Proof Silver Eagle was the first time the US Mint applied this special finish to a coin, which greatly improves the visuals of the fine details of the designs. And more, this coin has the lowest mintage of all Silver Eagle variations, with only 30,000 struck.

What year silver eagles are worth the most?

To date, the most valuable Silver Eagle is a 1999 PCGS grade MS70 specimen. It was the first to sell for the impressive amount of $13,000 at an auction. There reason is that only a handful 1999 Silver Eagles (11 to be precise) got an MS70 grade from PCGS.

SD Bullion is your coin dealer for American Silver Eagles, including some special sets that come with a certificate of authenticity. Talk to one of our representatives to find out more about the products we have available for you. You can reach us over the phone at 1(800)-8732 or through our live web chat service on the bottom right of your browser, from Mondays to Thursdays, from 8 am to 6 pm EST, and on Fridays from 8 am to 5 pm EST. Or send us an email at sales@sdbullion.com and we will reply to you as soon as possible.