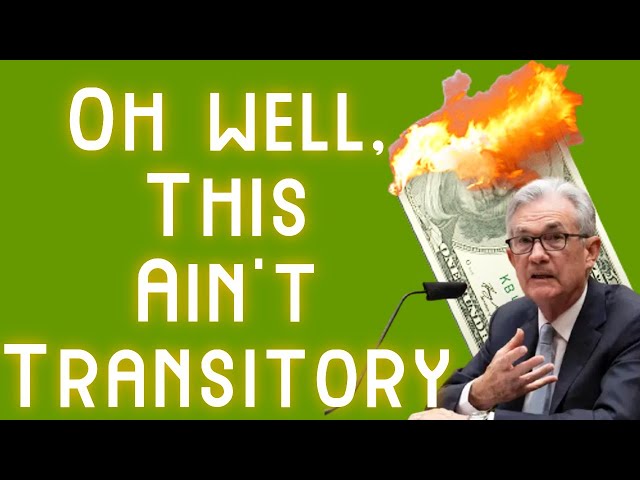 On June 5th, 2020, on this weekly SD Bullion Market Update channel, we showed and backlinked the "Bailout Blueprint for the 2020s" whitepaper delivered during the August 2019 Jackson Hole central banker symposium.

BlackRock delivered a plan of action written by many former central bankers calling for "Going Direct" in concert. A sixteen-page report, we will backlink again in the show notes here so you can reread it. For all has since then gone apparently according to these initial plans.

This August 2019 report called for a significant central bank policy coordination the next time we had a financial crisis. In September 2019, the overnight NYFed Repo fiasco kicked off only one month later, leading to this pandemic-driven fiat financial coup still underway.

This price #Inflation won't be modest,
it's only just begun

The fiat Fed & US Treasury became melded under Covid by emergency powers and a similar law workaround was suggested by Bernanke & BlackRock on Page 12. Page 9 massive inflation premeditationhttps://t.co/5Qlc3XH46f pic.twitter.com/GYx0u2Grvi

The still melded fiat Federal Reserve and US Treasury use Social Purpose Vehicles (SPVs) to continually inject massive currency creation directly into the hedge funds and the real economy.

Don't take our word for it either. John Titus, who runs a great YouTube channel called Best Evidence, recently had a video entitled "Meet the Fed's New BFF" where he contracted this chart illustrating that the new ∞QE∞ policies ongoing are way different than the form QE123 injections in 2009 and the 2010s.

We'll also leave a link to his video in the show notes if you want to dive further. John Titus' Best Evidence channel "Meet the Fed's New BFF."

CHART:
blowing out the $USD Monetary Base via Helicopter spending and also driving the fiat Fed's balance sheet up a wall same time

Suffice to say that the blue and the red line in the tweet embedded graph going up in coordination are direct central bank policies to kick off a much larger secular inflation here in the USA. Likely they hope in doing so they can better devalue the record debt and $100s of trillions in unfunded liability piles for which we never saved.

With over $29 trillion in US debt, this is only a mere fraction of what the US government nominally increasingly owes in the unfolding decades. Add on all unsaved federal entitlement programs like Medicare, Medicaid, Social Security, Retirement Pensions, etc. It all adds up to an unplayable sum in real value terms. US unfunded liabilities are estimated to be near $200 trillion in net present value terms.

So perhaps we face the brutal facts that the fiat Federal Reserve has set out to make massive secular inflation permanent policy, regardless of what deflationary downturns come our way.

When discussing ballooning US Debt levels

Devaluing fiat $USD's the majority most likely way out

This central bank "Going Direct" collusion for inflation policy come hell or high water is not by accident. It is by deliberate design, and it has become not merely a present but a permanent feature of our collective futures.

Another week of silver spot price and gold spot price losses have reached key technical levels at the bottom ranges of recent support. The gold-silver ratio briefly pierced 80 this week, and the technical short-term price bears are out calling for both monetary metal spot prices to fall further this month to close the year 2021.

We have seen multiple credible calls for the fiat $USD gold price, possibly dipping further into the lower $1,700s oz and possibly into the high $1,600s oz before a significant rally perhaps commences.

On the silver side, bearish calls for high teen spot prices are out, and considering how the almost daily algorithmic spot price selloffs have been typically at the open of the New York COMEX market, it would not shock me if we saw this.

Then again, if we do see this, get ready to see massive buying the wholesale and retail physical bullion markets not merely here in the USA but elsewhere in the increasing bullion-buying world.

Bullion product premiums will likely gap out to defend inventory levels and sustain businesses that supply the precious physical metals.

For as frustrating, seemingly lawless, and humiliating it has been to be a precious metals bull for over a decade running.

The fundamental and central bank policy drivers are likely long-term to produce significant swing trade value gains for those who take action and a long-duration viewpoint.

Looking back at the beginning childhood eras of our elderly citizens reminds us of this. The last time we blew out our US dollar supply or now fiat $SUD monetary base by this much was during WW2, and the inflation that resulted in the late 1940s, made the 1970s decade inflation spikes appear tiny.

Much higher inflation is likely soon ahead.

And as I have illustrated to start this week's update.

It is by pre-meditated coordinated bailout blueprint design.

Take advantage of these spot price dips and acquire prudent bullion positions if you have not already. You don't want to look back in regret later on.

As always, all you out there, take great care of yourselves and those you love.