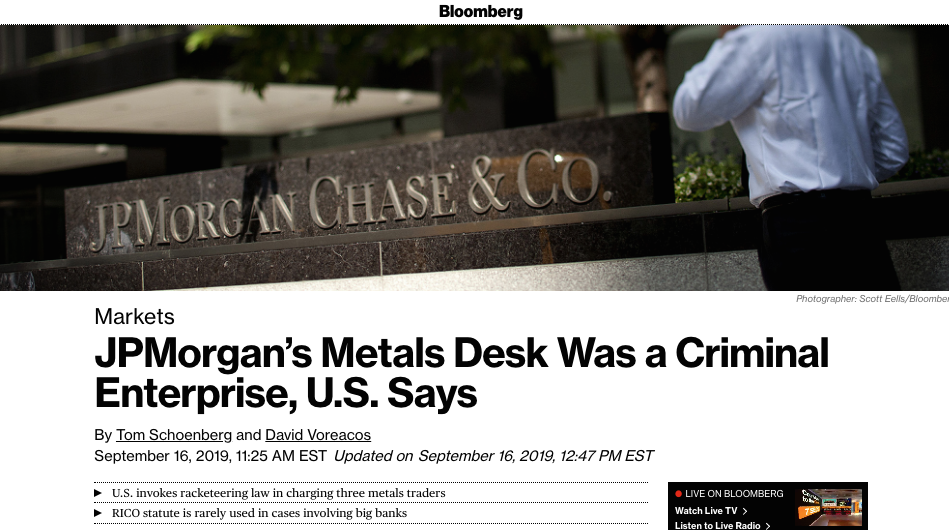 Today’s bombshell financial news out of the Department of Justice vindicates but a small few newspaper editors who had the chutzpah to cover this ongoing precious metals manipulation story way back when it was merely trying to unfold.

It also vindicates the feelings which many of our customers and ourselves who work here at SD Bullion have had since even before the 2008 financial crisis — by producing content which requires us to have studied this topic thoroughly. It has become apparent that precious metals are rigged for profit as in this alleged case here.

But furthermore, precious metals and other commodity futures contracts are also likely further rigged as a matter of 'National Security.' There is repetitive evidence of the US and other governments moving financial markets according to the dominate political agendas at the time. To somehow think monetary precious metal commodity values are not legally allowed to get moved under section 10 would be a gross misunderstanding on how empires operate historically.

Apologies in advance. Regarding this arrest of the former JP Morgan head of precious metals.t

We do not have the omniscience, nor do we all have the time, to go through all the negative repercussions that such market manipulations have on real-world people in the aggregate.

Many of you who have been hurt by these admitted and alleged crimes are reading this right now. Chances you could cite a litany of potential damages possibly inflicted.

Below we have Bloomberg's Joe Deaux, who lays down the pretention that they at Bloomberg get ahead of stories like these.

The exact opposite has almost always been the case concerning precious metals manipulation reporting.

Mainstream financial media outlets will not cover stories such as these, at least, until they get forced to. It is not in their business model to ever suggest commodity prices have and are systematically suppressed.

What did the famed author, Upton Sinclair, say about salaries and people's understandings?

Regardless, the severity of this alleged crimes is almost entirely trivialized below. But at least Mr. Deaux does state that RICO laws are not some slap on the wrist criminal charge. And that we're talking about the head of JP Morgan's desk here. The freaking guy in charge of the world's largest commercial bank precious metal betting division.

Many so-called, precious metals price manipulation conspiracy theorists, have for almost a decade or more been pointing fingers heavily at JP Morgan. A gargantuan-sized bank with massive price discovery power in some of our most critical price discovery markets ongoing.

These alleged price manipulation kooks can now point to this precious metals market manipulation criminal lawsuit as another solid piece of evidence that they were indeed correct.

This morning it was officially announced that the US Department of Justice had charged the former head of precious metals derivatives trading at JP Morgan with crimes.

Criminal charges that make he and others indicted in this JP Morgan criminal lawsuit, partly sound like mafia members being charged in the 1970s (RICO - Racketeer Influenced and Corrupt Organizations Act).

One could argue that the repercussions of their ongoing crimes have in the aggregate inflicted as much, if not more aggregate harm, than almost any other mafia might have. The key difference here is BANK A is JP Morgan Chase, Bank B an early 2008 bankrupt Bear Sterns (thanks partly to silver running to $21 oz back in 2008), Bank C likely UBS, and Bank D is perhaps Merrill Lynch.

But back to the gigantic mafia bank metaphor of them all.

It remains the fact that JP Morgan's COMEX silver bullion inventory dominates the competitors there (holding about 50% of all the leveraged bullion in that exchange).

How much of it is owned by their clients and how often have they been ripped off by employed traders at JP Morgan who supposedly executes orders on their behalf?

This criminal lawsuit alleges JP Morgan derivative trading customers got ripped off regularly. So we are not out of bounds wondering that question here.

Further, why would anyone trust and or do any business with this company at all?

Did 2008, not teach us anything about what matters most to them? Bonuses and profits, above all, else is tertiary.

This past week's SD Metals & Markets Bullion podcast, at around the 20-minute mark, we correctly speculated that the DoJ might use legal tactics required to take down mobsters or past bootlegging mafias.

The RICO statutes used in the criminal lawsuit filed by the US Justice Department today were initially used in the 1970s to go after New York mafia members.

Taking Down Mafia Criminals Not playing by the Rules

Called into question here is the world’s most systematically important bank.

JP Morgan Chase is referred to as Bank A on the DoJ's website.

It is JP Morgan that remains the world's too biggest to fail bank. That is according to the Bank for International Settlements’ Financial Stability Board (see page 3 / top riskiest tier 4).

Learn about bank bail-ins and then maybe ask yourself fully, do you think Jaime Dimon has all his derivative bets covered? Do you trust that guy's profit motive versus arrogantly being blind to risks?

Does today's DoJ criminal lawsuit instill confidence that Mr. Dimon and his management carefully on top of his bank's risk profile?

How come the JP Morgan, and its abundance of highly-trained lawyers, could not get ahead of this one?

Whom among over 250,000 employees, could JP Morgan use to police and potentially stop such admitted and alleged financial crimes from getting committed?

Who might stop handfuls of traders and the heads of derivative desks within their bank from committing financial crime conspiracies?

Is this merely the price of doing business with the world’s arguably too big to fail bank?

Well if history and some of our genius forefathers are any guides, this kind of fiat-currency-run-amok stuff never ends well for the vast majority of people — even the ones (like Jaime Dimon) enriching themselves on the less populated side of the growing wealth disparity gap. It often ends poorly for them or their kin, too.

Current stakes at play, as inferred by the US Assistant Attorney General, are that by allowing a near-decade of alleged criminal acts such as these. The banks' trading desks hurt the country of the United States, by continually helping to “undermine the investing public’s trust in the integrity of our commodities markets.”

If you have been paying any attention at all to Joe 6 pack bullion investor's sentiments. Majority cynical voices have been reigning supreme since 2011 especially.

Precious Metals Price Rigging for Bonuses: Only 1/2 the Story BTW

Does it not still undermine the investing public’s trust in our commodity markets when the entities that run them (e.g., CME Group) openly incite foreign central banks to trade in our price discovery markets?

After all, if you can conjure purchasing power from thin air. You can trade our commodity markets in massive volume and thus incite price discovery to move in whichever way, you may, damn well, please.

Prosecuting multi-executives involved in a ‘Multi-Year Market Manipulation Racketeering Conspiracy Charge,’ is likely not enough to reinstall confidence. Sorry, collective faith among majority bullion investors. That got shattered, many years ago.

The very essence of how these commodity price discovery markets operate today is moreover the real reform required. Do position limits ever get enforced? Is JP Morgan going to outlawed from trading in derivatives any time soon? 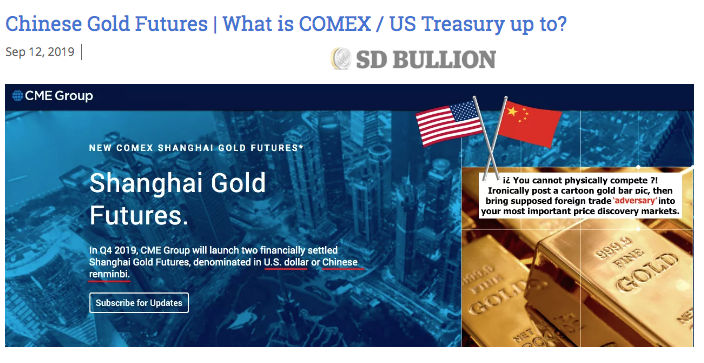 What about the invitation to one of our supposed 'Trade War' adversaries, to next month insert their critical gold price discovery mechanism into our financially significant price discovery exchanges?

Is the PBOC going to be getting high volume trading discounts on COMEX / NYMEX?

This CBIP program is an unreported, open invitation for foreign central banks to move price discovery markets according to their agendas potentially. 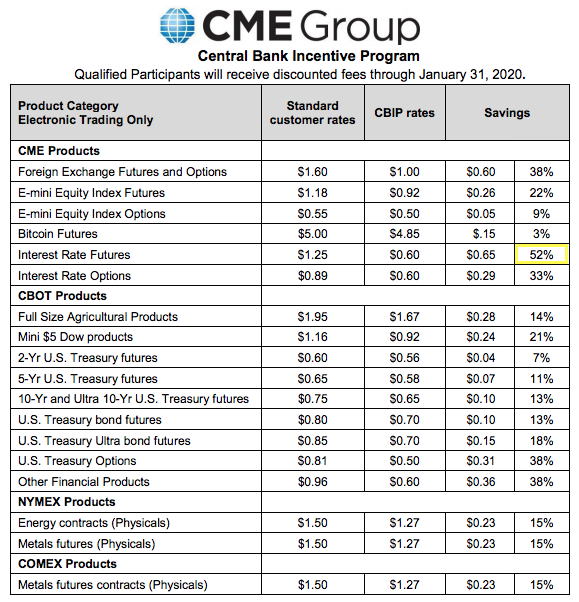 That very program by its existence, flat out calls into question almost all real-world prices for real things which are often vastly dictated by exchanges like the COMEX and NYMEX.

In other words, foreign central banks can conjure unlimited fiat currency out of thin air and come into our financial markets and move prices according to their agenda.

WOW A director has been accused of RICO! Does that bring the association into disrepute? pic.twitter.com/6sutMESw5o

Today's news is positive for precious metals investors and for those who have been waiting for some likely justice to come.

Time is ticking and running out to acquire a prudent bullion investment position at reasonable fiat currency prices — no matter the market riggings to come.

Precious monetary commodities like silver, gold, and other precious metals are still nowhere near their future potentials to come. Humans in mass will again scramble to bullion, as their faith too, in the people who run our financial markets, runs out.