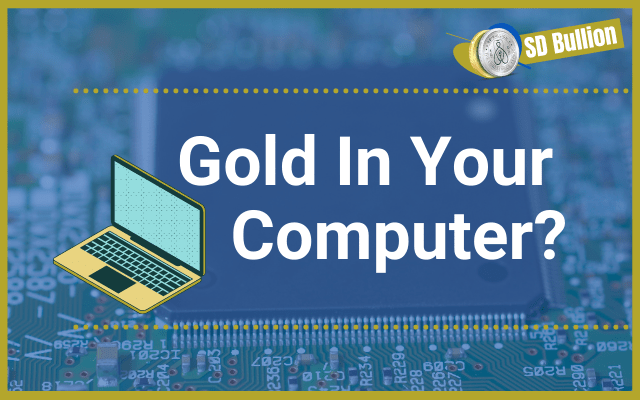 How much Gold is in a Computer Desktop or Laptop?

There is gold inside the electronic device from where you are reading this SD Bullion blog post, and probably other precious metals too.

To help our readers better understand gold investing today, here we explain fundamental facts on how much gold is thinly spread inside a computer desktop, laptop , and even smartphones.

Few consumers of laptop computers and desktops know the interior of their electronic devices have a considerable amount of gold content. You can find thin layers of gold plating and gold pins in computer components, such as memory chips, central processing units, circuit boards, and other components as well.

Why do you think computer makers like Dell and Apple, giants of the electronics industry, are offering to recycle your electronic devices? E-waste has become a valuable material to recover gold, along with other metals.

Why is gold used in a laptop or desktop computer?

While silver may be less expensive and faster in terms of conducting electricity than gold, the fact that gold does not corrode in the open air is why it gets used in high-end electronics and computer chips. After all, metallic corrosion is to electron speed what unpaved roads would be to formula one cars (it does not function well at all).

Gold, on the other hand, is highly corrosion-resistant and supremely malleable. So, while it's not as fast as silver, it doesn't attract a sulfuric hue as silver does in the open air. And yes, gold moving electrons is many times faster than copper, so we often see gold contacts in parts such as RAM chips, which are electrical contacts, plated with a thin layer of gold coatings in order to improve corrosion protection and increase electrical conductivity. This process is known as gold electroplating and is only one of many uses for gold humans has found.

Thus far in the 21st Century, we humans have averaged using about 10% of our annual new supplies from gold mines to build out our modern computing and electronics infrastructure.

Of the typical 3,000 metric tonnes of newly mined gold ore per year, some 300 tonnes of gold goes into producing high-end electronic devices (some may too come from another 1,000 tonnes annually recycled gold).

Do you know how gold is mined? Read more on our article.

Gold coats parts inside the personal computer or smartphone you are reading this from.

Computer Gold / Laptop Gold Recycling can be Profitable at Scale

Some fractional grams of gold per computer, laptop or smartphone may not sound like much valuable metal content, but if you recycle e-waste by the tonne, the gold and silver one can withdraw starts to add up to real money and purchasing power.

While extracting gold from electronic components may not sound like an easy task, when done at a large scale, recycling computers and laptops to extract gold and silver can be very profitable, especially when you are paying next to nothing for electronic scrap.

Mining circuit boards for gold can be more valuable than mining much of the highest grade gold mine ores given the generous gold plating in electronics scrap.

One ton of computer and laptop circuit boards are estimated to contain 40 to 800 times more gold than one metric ton of gold ore.

How much Gold is in a Computer?

The answer varies depending on the recycling source and computer board components.

We believe it conservative to say with today's gold price, over $10 of gold gets layered in an average computer.

In other words, 1/5th of a gram of gold can get pulled or withdrawn from an average computer's interior.

How much Gold is in a Laptop?

While slightly less gold gets layered through a smaller computer laptop, in our research, with the current gold value, it is possible to assume that over $6 of gold is layered in an average laptop.

In other words, just over 1/10th of a gram of gold can be recycled off one singular laptop on average.

How much Gold is in a Smartphone?

Our phones also contain some parts of precious metals content, especially gold. According to the U.S. Geological Survey, there are 0.034 grams of gold in a cell phone and, again, these are usually used in electrical connectors, forming the wirings inside chips and microchips, again for its malleability, corrosion resistance and conductivity.

That would be worth, approximately, $2 at today's prices.

In the early 2010s, the US' EPA estimated only some 12.5% of e-waste gets recycled. This figure has likely increased some in the last few years.

The electronic waste industry is a globalized business.

About 70% of e-waste gets shipped to landfills in developing nations, where it is typically sorted and sold for scrap metal. Sometimes short-sightedly, this e-waste gets burned to extract valuable materials; such action is harmful to people and the surrounding environment, of course.

According to the United Nations, up to 50 million metric tons of e-waste gets discarded every year.

The USA leads the world in e-waste output, producing over 10 tons million of electronic waste per year. The USA also sends e-waste to its prison industrial complex, where it often gets processed in under-regulated environments.

The vast majority of gold bullion we humans have mined has not gotten recklessly tossed into emerging market landfills or become precious metal scrap.

The biggest hoard of gold bullion sits with governments and their fiat currency-issuing central banks. They hold about 1 in 5 ounces of gold ever mined because gold is default-proof money. Among human beings, it is the pinnacle monetary store of value long term.

Another large swath of gold bullion gets owned among millions of people all around the world. Slightly less than 40% of all the gold ever mined remains in gold coins or investment-grade gold bullion bar forms.

The slightly largest sector for gold demand is in jewelry (most demand from India and China). Eastern gold jewelry buyers treat higher grade 22k and 24k gold pieces like bullion. They see it as a store of value for the intergenerational long term.

Even though scrapping the computer or smartphone you are reading this on may not contain a large amount of gold or silver, the information you learned here should be of higher value.

Do you want to learn more about how to buy gold online and start investing? Keep reading in our article.

Especially if you begin to investigate and ultimately understand why a prudent gold investment position makes sense, even more so in the devaluing fiat currency world we live in at the moment.