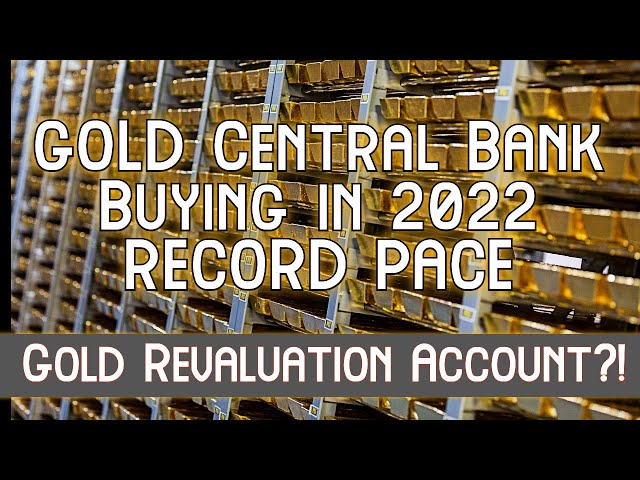 Central banks are reportedly on pace this year to buy more gold bullion since the last official gold price rigging scheme collapsed (London Gold Pool 1960-1968, as the US dollar gold spot price multiplied 24Xs to follow by early 1980, running from $35 oz to $850 oz in about a dozen years).

Last week, a Q3 2022 report by the World Gold Council stated that nearly 400 metric tonnes of gold bullion got bought up by central banks.

This year's central bank gold bullion buying pace is at a 55-year record high level ever since before the last official gold price rigging scheme in London fell apart in 1968 (more on that failed scheme in this week’s bullion market video update).

The WGC, or World Gold Council, only explicitly named just under 1/4th of where all this Q3 gold reserve accumulation went to (places like Turkey, Uzbekistan, Qatar, etc.). Citing that a substantial amount of these nearly 400 tons of gold bullion bought went to central banks that did not publicly report their purchases.

Somewhat unusual to see this, but Bloomberg and other major financial reports speculated about the usual names of the mysterious buyers. China, Russia, Saudi Arabia, and India, all BRICS names bandied about this week as possible sources.

This is nothing new for people watching physical gold bullion flows, which have increasingly flowed east since the 2008 global financial crisis, illustrating increasing awareness that this financial system is more insolvent and brittle than almost everyone thought prior.

Why now are global central banks buying more official gold bullion reserves than they did back when the London gold price rigging pool failed?

Why is the head of a major European nation's central bank deflecting questions about its potentially insolvent balance sheet by citing things like its 'gold revaluation account'?

The respective fiat US dollar-denominated silver and gold spot prices finished trading with strength to the upside this week.

While the price of gold finished this week just under $1,700 oz.

The gold-silver ratio flushed downward to 80 to finish this week.

Each of these pallets is about 1 metric tonne of gold, 32,150.7 troy ounces. So in this past quarter, central banks are claimed to have brought about 20X what you see in this week’s bullion market update embedded above.

This nearly 200-year-long chart on Official Gold Reserves starting in 1845 gives you an idea of gold reserves updated up to 2020, a few years back.

Cheap, efficient energy during the late 19th and early 20th-century industrial revolution brought hoards of official gold into the system.

In the next chart of Official Gold Reserves, we will focus on the last 70 years or so.

The world’s Official Gold Reserve peak was just as the last official gold price rigging plan got underway in London during the 1960s. It failed spectacularly so by 1968 and cost us in the USA about 1/2 our official gold reserves in part (along with other conspiring nations) trying to artificially rig the value of gold bullion much lower than it should have been at the time.

You can also see on these charts the major 2008 Global Financial Crisis trend change when many worldwide woke up to how broken this current fiat financialized system is.

Here is a chart illustrating how the Bank of England actively intervened in the gold price market during the London gold pool price rigging era.

You can see massive losses of capital and physical gold quickening through the failing price interventions from 1964 to 1967 here, illustrated by the increasing orange line losses spiking downwards.

Before participating in the London Gold Price rigging scheme, the USA used to be a much larger gold bullion reserve powerhouse. Here, our official gold reserves fall from nearly 20,000 to just over 10,000 tons before pulling out of the failing plan.

All this happened when price inflation in the USA and the major G10 nations was less than half what most official inflation rates currently are in 2022.

Turning to the modern gold market in 2022. We're going to see why many unsecured ETFs and the warehouses that often commingle and double count their underlying ounces are the modern-day version of the London Gold-sucking sound headed east this time around.

This chart represents all ongoing transparent gold piles throughout the full fiat currency era. Since the inception of unsecured ETFs for gold, the pile has ballooned in size.

Here is a clearer look at this 21st Century's version of these holdings. The blue line is the total reported amount, and we can see around 30 million oz of gold have flowed out with net selling since the summer 2020 gold price high was hit. Almost 1,000 metric tonnes of gold sold off and shipped elsewhere (probably mostly to the eastern world).

According to industry records, this entire pile of 131 million oz now seems large, but it represents under 2% of all the physical gold we humans have ever mined.

In the modern-day silver market, the story is very similar, except a larger portion of these outflows go into industrial uses like the computers you are using to see this report.

Turning back to the modern-day global gold market, we can also see this phenomenon illustrated in price action. This chart starts with a beginning 2010 gold price of $1,099 oz. The RED line shows the price of gold at each New York open. The BLUE line shows us the aggregated or added-up price of gold over the same timeframe outside of New York COMEX trading hours.

When the fiat US dollar gold spot price sells off over the last dozen years, the eastern world is there to bid long and often snatch up western paper hand outflows physically.

Don't get it twisted. On a small scale in the USA, for instance, a growing percentage of the population is buying physical gold bullion on spot price dips. US Mint and record-sized retail bullion industry sales data confirm that.

This week's point is that when it comes to the largest physical gold and silver flows of late, they are eastern world bound, often subsidized by weak-handed western derivative gold silver sellers.

Turning now to another interesting point made by gold-holding central banks this past week.

A dutch born industry colleague Jan Nieuwenhuijs both translated and published this interesting video with the current Dutch central bank Governor's surprising answer when pressed on the questionable solvency of the Dutch central bank's balance sheet.

From 1992 to 2008, the Dutch central bank sold off over 1,100 tons of gold bullion reserves, along with other EU central banks (the UK and others), while the gold spot price tripled in value regardless of the value subterfuge selloffs.

After the 2008 global financial crisis, central banks are back in the market, having officially brought about +7,000 metric tonnes since. The Dutch are left with 612.5 tonnes at the moment. Still, not to worry, those tonnes are part of the central bank's "gold revaluation account" of which the major European partners collectively hold the largest official hoard when added up in their union.

Of course, Russia, India, and China are probably underreporting by many multiples. And now that Russia has gone offline into war and India is signaling its growing BRICS allegiances and future ties, it is hard to know what record amounts of gold bullion are flowing where.

There is still a long, painful road ahead, especially for those who are bullion illiterate.

As this fiat financialized record debt supercycle grows unstable and ultimately breaks open into another global financial crisis spillover event, by then, the mania for bullion will likely not be from just governments and eastern investors but also, finally, massive western investor capital inflows. Many, unfortunately, will be left with only inferior paper options to hold (underperforming unsecured ETFs, risk-laden mining shares, and other questionable counterparty forms of derivative bets as bullion becomes hard to procure at reasonable value).