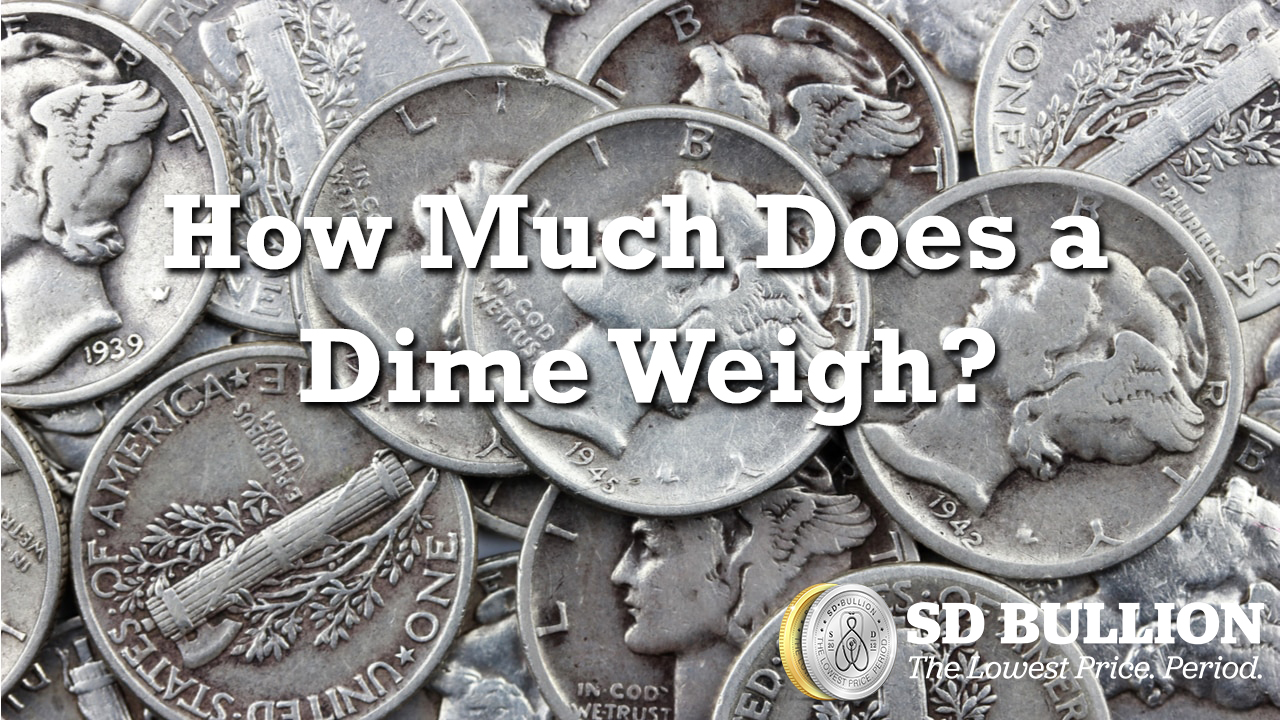 How Much Does a Dime Weigh?

In the coin world, the quarter receives a lot of attention. However, what about the next one in line? Let’s take a closer look at the dime.

Why are dimes so small?

The Coinage Act of 1792, also known as the Mint Act, established the U.S. Mint and created a decimal system for the young nation’s currency. The legislation authorized U.S. dimes, which would be worth 10 cents. Because it would be the second most valuable coin after the quarter, it makes logical sense that it would also be the second largest. But, in fact, the dime turned out to be quite a bit smaller. The reason for this goes back to the timetable of when specific coins were introduced.

Over time, other U.S. coins — including half-dollars, quarters, and dimes — were created in smaller units. Each of these new coins was designed so that it would contain the appropriate amount of silver relative to the dollar coin. As a result, the dime had to be relatively small because it only had one-tenth the amount of silver that the dollar coin had.

Eventually, nickels and pennies were needed to make everyday transactions easier. That presented a challenge: How could the U.S. Mint make these smaller denominations of coins even smaller than the tiny dime?

What Are Dimes Made Of?

Today, U.S. dimes are made out of an alloy (a mixture of metals) of 91.67 percent copper and 8.33 percent nickel. They are the smallest, thinnest, and lightest U.S. coin, and each dime has an edge dimpled with 118 ridges.

All dimes produced in the U.S. before 1965 are made of 90% silver. These vintage coins are sometimes referred to as “junk silver” in the industry because they aren’t considered collectable. Additionally, every year since 1992, proof Roosevelt dimes issued by the U.S. Mint in special Silver Proof Sets have likewise been struck from .900 fine silver.

If your dime bears an image of Lady Liberty, it’s almost certainly made of silver. This includes both Seated Liberty (minted 1837-91) and Barber dimes (minted 1892-1916). It's highly unlikely you will find one of these old dimes in your pocket change, however.

You may be fortunate enough to come across a Mercury dime (minted 1916-45). The image is actually Lady Liberty wearing a winged cap, but it has long been mistaken for the Roman god, Mercury. The nickname endures.

Are you curious about what a silver dime might be worth? You can always calculate the melt value of your silver dime by multiplying its actual silver weight — 0.07234 troy ounces — by the current spot price of silver.

The troy ounce is retained even today as the standard unit of measurement in the precious metals market to ensure purity standards, and other common measures remain consistent over time.

What Is a Troy Ounce?

Precious metals are always weighed in troy ounces. When dealing with those metals, “troy ounce” and “ounce” are interchangeable.

So, How Much Do Dimes Weigh?

How Much Does a Dime Weigh on a Scale?

Though it may be small in size, America's dime goes back more than two centuries — to the early days of our country. Over the years, it has undergone many changes.

First struck in 1796, the original dime design — like other silver coins of the era — bore the Draped Bust design.

The obverse depicts a bust of Liberty with her hair tied with a ribbon. For the series' first two years, the reverse showed an eagle perched within a wreath. In 1798, the reverse design was changed to feature the Heraldic Eagle. This design was struck through 1807.

The U.S. Mint did not issue dimes in 1808, but it released the Capped Bust dime in 1809. Though the obverse was similar to that of the earlier design, Liberty’s head now sported a cloth cap.

The eagle on the dime’s reverse also changed with this new design, now appearing perched on a branch with arrows clutched in its talons. Although this design was issued through 1837, it was not struck every year until 1827.

First issued in the same year as the final Capped Bust dimes, the Liberty Seated coinage marked a departure from the classic close-up portraiture. This new, more modern design featured a full-length depiction of Liberty.

Seated on a rock, she holds a pole in her left hand with a cap on the end. Her right hand supports a shield. On the reverse, the traditional eagle was replaced by an open wreath surrounding the denomination.

In 1837 and early 1838, no stars appeared in the obverse design, but beginning in 1838 through 1860, 13 stars were added surrounding Liberty. Although the design was modified several more times before it was discontinued, the Liberty Seated coinage continued until 1891.

During the last year of the Liberty Seated dime, the Treasury Department began a search for new coin designs. As a result, in 1892, Charles Barber's Liberty Head design debuted on the dime — as well as the quarter and half dollar.

Better known as the Barber dime, the obverse features Liberty’s profile, wearing a cap and laurel wreath on her head. The reverse was continued from the previous design: a wreath surrounding the statement of value.

Adolph A. Weinman’s highly acclaimed “Mercury” design replaced the Barber dime partway through 1916. Elsie Stevens, the wife of poet Wallace Stevens, may have been Weinman’s model.

His design once again featured the head of Liberty, this time wearing a winged cap to symbolize freedom of thought. However, following the coin’s debut, the public mistook Liberty for the Roman god Mercury.

To this day, the coin is best known by that nickname. The reverse also changed, featuring a fasces (bundle of sticks) with an ax blade, and an olive branch in the background. The beloved Mercury dime continued until 1945. That same year marked the death of President Franklin D. Roosevelt, which prompted another change to America’s dime.

In 1946, the year following Roosevelt’s passing, a dime design debuted in his honor. Depicting the profile of America’s 32nd president, this tribute was exceptionally fitting because of his longstanding association with the March of Dimes.

The reverse shows a torch flanked by branches, with the denomination below and the words “United States of America” above. This design continues today and is the longest-running dime design in U.S. history.

Taking a Closer Look at Coins

The history of the dime is quite impressive, and you may find it surprising how many different types of dime designs have existed throughout the years. Many of the coins’ designs have incorporated different historical elements.

Are you interested in more facts about other coins? Then it’s worth looking into how much a quarter weighs.